A new report this morning states that Apple manages its businesses on a geographic basis. With the release of the company's December quarter results, management created an additional revenue region called "Greater China" and now reports revenue from other countries in the former Asia-Pacific revenue region as "Rest of Asia Pacific."

Apple's Revenue Regions in for FY2012 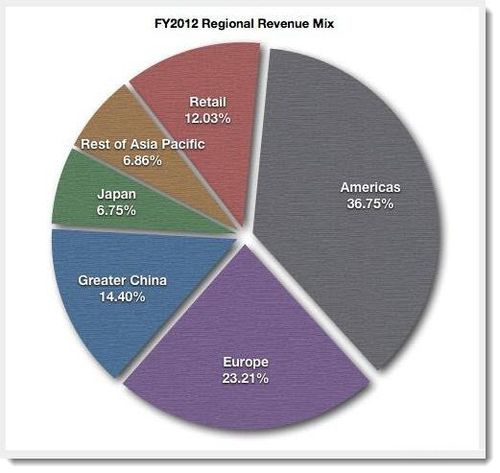 The report further states that "Last fiscal year, both the United States and China represented more than 10% of Apple's reported revenue. The graph below illustrates revenue by region in the fiscal year and the corresponding rates of regional revenue growth."

As illustrated in the chart above, in FY2012, Greater China and Japan represented Apple's fastest growing revenue regions. One of the report's key points was that "the iPhone is not currently available on the largest national carrier in either revenue region."

In China, that would be China Mobile. The good news is that it was revealed in 2012 that Apple has a confidentiality agreement with China Mobile. It's a positive sign that should lead to an announcedment later this year that the iPhone 6 will be available on Mobile China's network. We reported last year that China Mobile is in the process or converting their network over to 4G which was one of the drawbacks working with China Mobile.

Apple Could Excel Growth by Addressing the Pre-Paid Market Segment

A report yesterday by Business Insider stated that Morgan Stanley Met with Apple's CFO and came away more confident that a lower cost iPhone solution was in the making. The report noted that a full two years ago Tim Cook had stated that Apple was doing "clever things" to attack the prepaid market, because he wanted Apple to be "for everyone," not "just for the rich." It's a strategy that would do well in countries like India where the pre-paid market is huge.