The US Patent and Trademark Office officially published a series of twenty-seven newly granted patents for Apple Inc. today which includes two design wins covering Apple's iPod Classic and Newsstand icon. In Addition, today's granted patent report covers such inventions as adaptive sensors for GPS tracking accuracy, the MacBook's speaker grill, tactile feedback for iDevices, a unique accessory for the iPod that has yet to surface and one that allows a future iPod or iPhone to become your MacBook or iMac mouse.

Apple has been granted two design patents today which cover the iPod Classic and the iOS Newsstand icon. 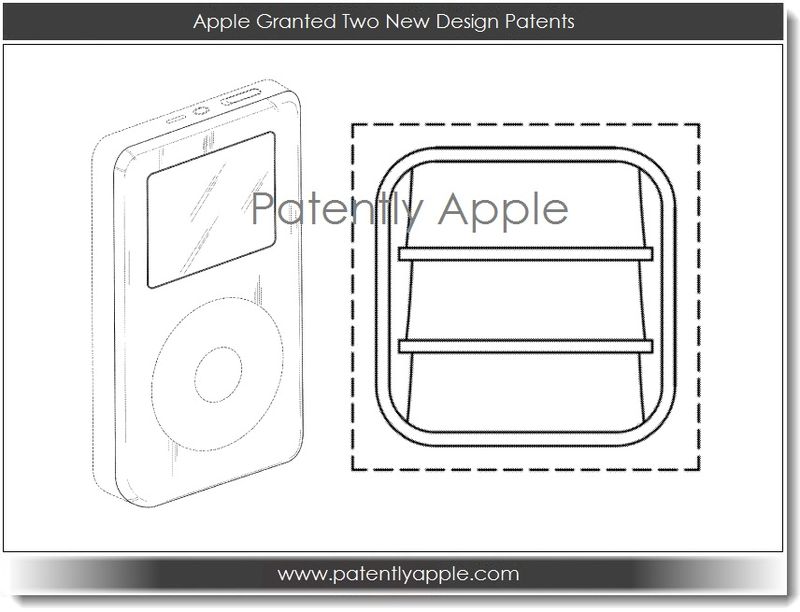 Apple credits VP of Industrial Design Jony Ive and team along with the late CEO Steve Jobs as inventors behind this patent.

Apple has been granted a patent today for their invention relating to an adaptive sensor that assists a GPS to improve its tracking abilities. 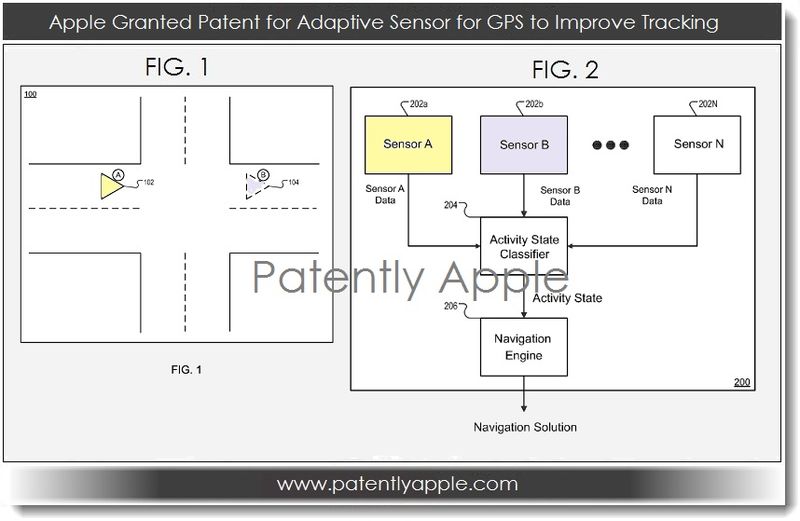 Apple credits Rudolph van der Merwe who is an R&D Engineer (Advanced Computation Group) as the sole inventor of this granted patent which was originally filed in Q4 2009 and published today by the US Patent and Trademark Office. To review today's granted patent claims and details, see US patent application number 8,374,775.

Apple has been granted a patent today for their invention relating to the MacBook Pro's speaker grill formed into its aluminum housing. The speaker holes may have with small diameters without overly attenuating sound from a speaker.

Apple credits Ron Hopkinson, John Raff, Bartley Andre, Chris Ligtenberg and Ruchi Goel as the inventors of this granted patent which was filed in Q2 2012. The originating patent was filed in 2008.

Although the patent covers Apple's classic clickwheel mechanisms for controlling a portable device UI such as the iPod, it also covers the iPod and/or iPhone doubling as a mouse to control a desktop as noted above in one of Apple's patent figures. This particular aspect of Apple's invention has yet to be fulfilled. The heart of the patent on the other hand went on to power many generations of iPod

Apple credits Howard Miller and Frank Doepke as the inventors of this granted patent which was originally filed in Q1 2007 and published today by the US Patent and Trademark Office.

Apple has been granted a patent today for a specialized microslot antenna that could be used in a future MacBook that will provide users with built-in cellular data capabilities as well as voice-over-internet-protocol for telephone calls.

Apple credits Bing Chiang, Gregory Springer, Douglas Kough, Enrique Ayala and Matthew McDonald as the inventors of the granted patent that was issued today by the US Patent and Trademark Office.

Apple has been granted a patent for one of their initial tactile feedback inventions for the iPod and iPod touch. In some embodiments, the electronic device may simultaneously provide different types of tactile feedback, visual feedback, audio feedback, olfactory feedback, or any other suitable combination of feedback. 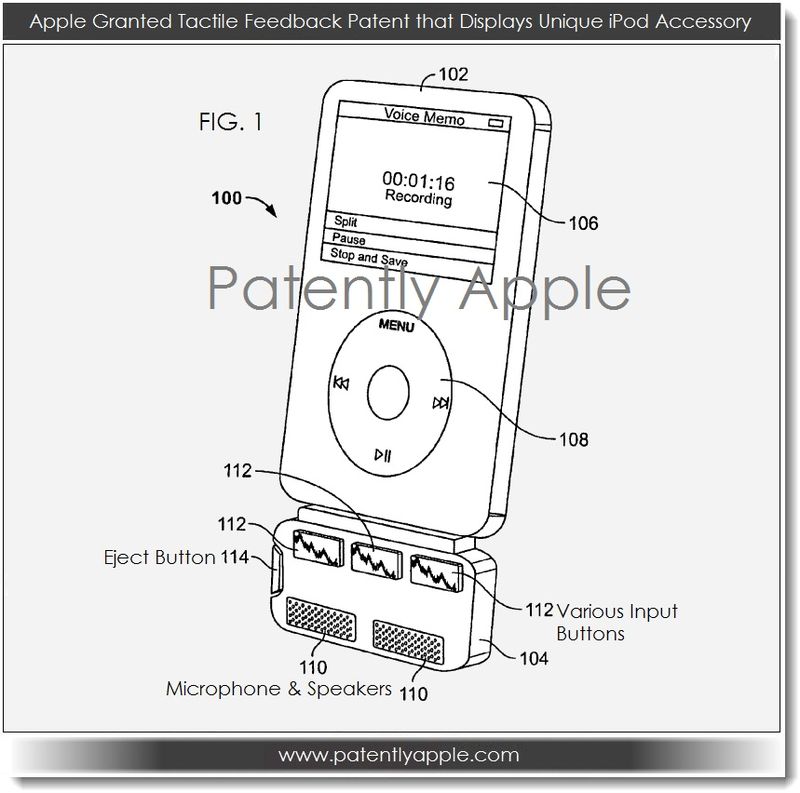 Although the main thrust of the patent is indeed about tactile feedback, Apple did in fact squeeze in a unique accessory for the iPod and/or iPod touch that would bring superior microphone and speaker capabilities.

Although Apple's patent doesn't go as far as to specifically state that telephony is part of this accessory, there's sense that such as service could be integrated into this accessory. So why would that matter? Technically it would allow Apple to sell a relatively inexpensive accessory that could provide emerging markets with a cheap way to add telephony to their iPods. It wouldn't be a high-end iPhone, but it would get the job done.

In January, Former Apple CEO John Scully was in India on business and stated at the time that he believed it would be Samsung who would be first to crack the smartphone market in India with $100 product. An Apple accessory with basic telephony could fall into that price range and become a means of entering emerging markets that already have an iPod base.

While there's no doubt that a sexy iPhone nano would be preferred as the ultimate entry level smartphone, providing consumers with an iPod telephony based accessory could be an inexpensive option down the road.

Apple credits Anthony Fadell the Podfather, Andrew Hodge, Stephen Zadesky, Aram Lindahl and Anthony Guetta as the inventors of this granted patent that was issued to Apple today by the US Patent Office. 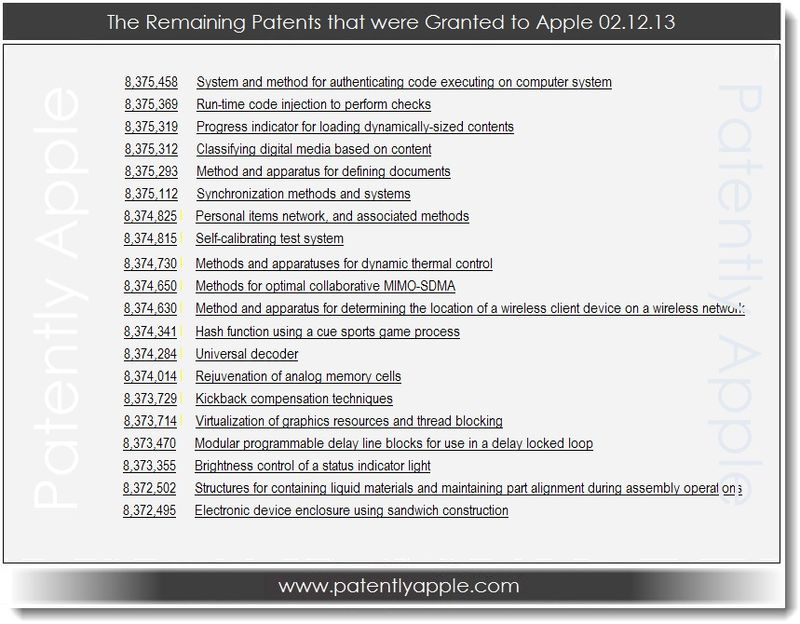 Readers should be aware that every Tuesday the US Patent and Trademark Office publish Apple's Granted Patents. Granted patents are approved patent applications that Apple applied for months or even years ago. In the vast majority of cases, "granted patents" aren't covering any new kind of technology on the day the patent is being granted. New Apple technologies are generally revealed on Thursdays by the US Patent Office in the form of published patent applications. Some Mac sites confuse this process by making claims and presenting bylines on Tuesday that insinuate that Apple has just revealed a new technology or process. (Here's a current case in point where a very old granted patent has turned into a magic secret platform. Ha!) In 99% of cases, this is simply untrue and readers should be made aware of this fact. Known exceptions would include patents that were recently acquired by Apple or a domestic and/or foreign patent application that Apple had never presented in the US before under its own brand name.