In August 2012 we reported on Apple's new patent application about a next generation iPad Cover that described integrating solar panels right into the cover as illustrated above in our cover graphic. To be honest, like most, it seemed like an idea that could be viable "sometime" down the road, like 2016. But apparently the race is on to get this to market sooner. Not only is Apple working on this idea, but so is a GaAs solar material maker called Alta Devices.

Alta Devices is boasting that they can produce GaAs (gallium arsenide) solar cells that are only 1-micron thick, which opens up the possibility of a whole new field of lightweight, flexible, mobile solar applications. The efficiency combined with the super thin form factor means that anything that can be moved, carried, or worn could eventually incorporate the technology.

DigiTimes had the opportunity to meet with Alta Devices at the Euroasia event hosted by Globalpress in Silicon Valley and then had a chat with company VP Rich Kapusta during his recent visit to Asia.

Q: You have an efficiency of 28.8% with your solar cells. Can you explain how you achieve this?

A: The material we use gives us our efficiency. We start with gallium arsenide (GaAs), which is known to be the highest energy density material on the planet. This is the material used for panels used by the space program and has always been the best solar material possible for single junction applications. However, working with GaAs has always presented challenges. It is extremely expensive and cells have typically been produced on a wafer that is rigid and thick, meaning not very flexible.

The innovation we've provided is to figure out a way to grow the cell in a form factor that is extremely thin, giving us plenty of flexibility and reducing the material costs. The end result is that our cells are only 1-micron thick.

Q: How do you achieve such a thin form factor? Is it the materials or process?

A: We grow the cells on a standard 4-inch square GaAs seed wafer, which we purchase from a traditional semiconductor technology company in China. The innovation is in the manufacturing process.

The first thing we do is grow what we call a release layer on top of the wafer. This is a super thin layer of aluminum arsenide where the crystals are perfectly matched to the gallium arsenide. On top of that is where we grow our gallium arsenide solar cells. These cells are only about 1-micron thick, compared to about 600-650 microns for typical solar cells. We also place a coating of metal and a layer of PET (polyethylene terephthalate) to protect the back side of the solar cell.

Another key innovation Alta has developed is a process where we go back to the release layer and etch away all the aluminum arsenide. Etching that layer away separates the 1-micron GaAs layer from the seed layer, allowing us to then reuse the wafer. This overall process is the reason we can achieve such low costs for a GaAs solar cell. A 1-micron thick solar cell uses so little of the material that we can simply keep reusing the original wafer.

Q: What about the consumer space?

A: I believe the CE market is going to be a really big opportunity for us. For example, we have prototypes of phone covers that can be put on a typical smartphone. These covers can provide 1.3W of energy (literally) inside an office. With that amount of energy, a smartphone's battery life can be extended by about 10%. That doesn't sound like much but then again, think about how much R&D is being done in the semiconductor industry, display industry and battery industry to reduce power and extend the life of smartphones.

We can do it simply by adding solar to the back of the phone and we can do it at a reasonably low cost. Moreover, this example is for someone who is inside the office all day. If you are spending more time outdoors, that number goes up dramatically for extending the battery life.

For a typical tablet, the added surface area provides for about 10W of space, which is the same as plugging the device into a wall. Think about it, having the smartphone or tablet beside you while at lunch or at Starbucks would give you a charge for the rest of the day.

We can uniquely enable these types of applications because of the thinness of our cells. We add basically no thickness to the phone itself because we can directly integrate into the case of the device. And there is no added weight because our solar cells probably weigh less than the plastic they are replacing. So with very little added cost and no change to the form factor, we can uniquely enable the ability to charge on the go.

These are examples of markets that people have tried to go after in the past but they never succeeded because the technology and prices points have never been that suitable.

Q: So a US$50 iPad cover that eliminates the need for charging is not out of the question?

A: It makes sense. And if someone were to integrate that into the tablet, it would be an interesting way to differentiate a product. Therefore we are currently talking to both OEMs and ODMs to gauge interest.

On a more direct note, Alta Devices stated back in October that they had plans to make a fast-charging solar iPad cover by the end of 2013.

As noted at the top of our report, we reminded you that Apple has had their eye on delivering an iPad cover solution that would integrate solar panels. And in 2011 Apple pointed to adding solar cells to other iDevices like an iPod or iPhone that supports what Alta Devices described in their interview with DigiTimes. So the race is on to deliver a next generation iPad cover with solar panels, and Alta Devices is aiming for Q4 2013 at the earliest.

What was first thought of as a future feature that could take 5 or 6 years to come to market at the earliest is now apparently a product that could actually come to market in a matter of months. Although I'll believe it when I see it, I'm encouraged by Alta Devices sheer enthusiasm that this will be in the market sooner than most of us imagined. As a first to market application, Apple's iPad Cover would be ideal due to its size.

If and when they get it right on a device cover, the move to directly incorporate them into mobile device embodiments could be a rather fast transition. Apple has been working on MacBooks with solar panels for a few years now and Sony has recently shown their hand in developing a future Ultrabook Convertible device using solar cells. Thanks to Alta Devices, we may have a few solar cell device surprises on the way in the not-too-distant future. 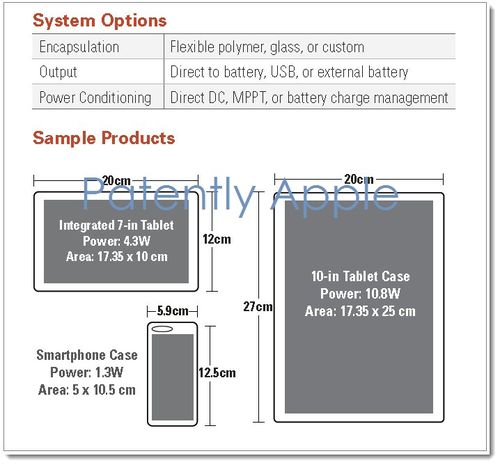 Source: From DigiTimes report titled "Putting solar on anything that can be moved, carried or worn: Q&A with Alta Devices" available to subscribers only.