The US Patent and Trademark Office published twenty of Apple's patent applications today and we highlighted four of them in-depth throughout the day. However, there were nine other patent applications that were published today along with seven continuation filings. In today's Patent Lint report we provide you with the links to each of the remaining patent filings that we didn't highlight, just in case there's something that may be of interest to you. Today's Patent Lint report covers such matters as collaboration on virtual works of art, adaptive auto exposure for cameras, telecommunications and more.

The Mac Community is large and diverse. Subjects that don't necessarily interest us may very well interest you depending on your profession or what your hobbies happen to be. The following is a list of Apple's other inventions published today by the US Patent & Trademark Office:

Systems, Methods, and Computer Readable Media for Managing Collaboration on a Virtual Work of Art

From the inventor who created a "New Method to Add Signatures to E-Documents," comes a new collaborative centric application for mobile devices that's very much in synch with Apple's latest press release about the coming 128GB iPad. In Apple's press release. Amy Bunszel, vice president of AutoCAD products for Autodesk stated that AutoCAD "files are often large and highly detailed," and so the new iPad with 128GB will be a real advantage for iPad users to view, edit and share their AutoCAD data. Collaborating on massive virtual art files with other artists on a given project is, as Apple puts it, "confusing and/or inefficient."

Apple's latest patent application relates to systems, methods, and computer-readable media for managing collaboration on a virtual work of art. 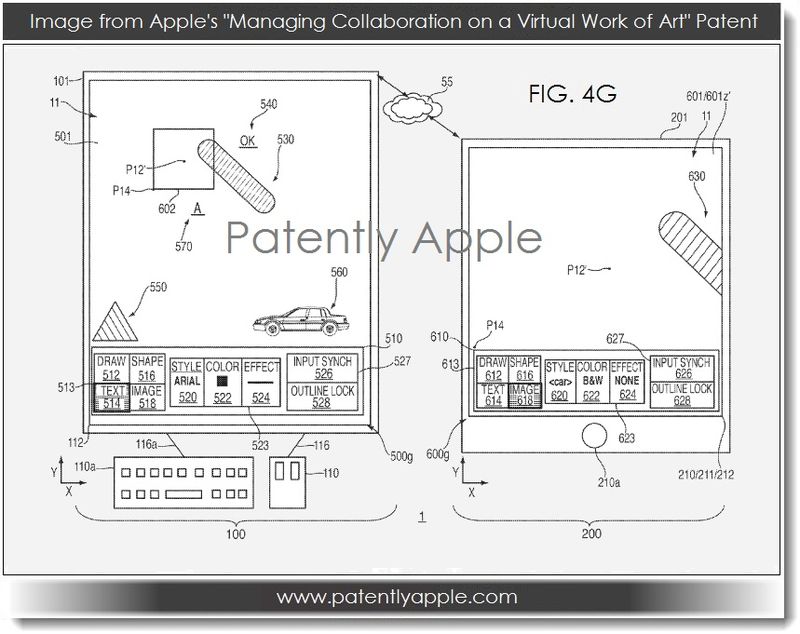 Unless you're an artist, reading this patent application will simply bend your noodle. Yet for those working on massive files, like AutoCAD data, you may want to check out Apple's massively detailed patent application 20130027404. It's quite advanced.

Apple's patent relates to techniques for adjusting exposure parameters of a camera such that video data captured by the camera may be coded efficiently. A camera with auto exposure control may capture and output frames of video. A pre-processor may estimate brightness of the frames of the video output from the camera. A controller may estimate a rate of brightness change among the frames, and when the rate of change is lower than a predetermined threshold, the controller may reduce sensitivity of the auto exposure control. A coding engine may predictively code the video.

We covered this invention which is now a granted patent back in 2012. Apparently Apple cancelled their first 33 patent claims leaving the patent with 20 claims in this recent filing. While there's nothing to get excited about in today's filing, the invention that was granted is definitely one that we'd love to see come to market.

Dome Array for use with a Switch

Allocating Resources in a Frequency-Time Space to Mobile Station Data

To round off Apple's count to twenty, you have to also include 7 continuation patents which we covered in our first report of the day.

For interest sake, our new Patent Lint report segment was inspired by one of the quotes in the movie Forest Gump where he states that "Life is like a box of chocolates. You never know what you're gonna get."