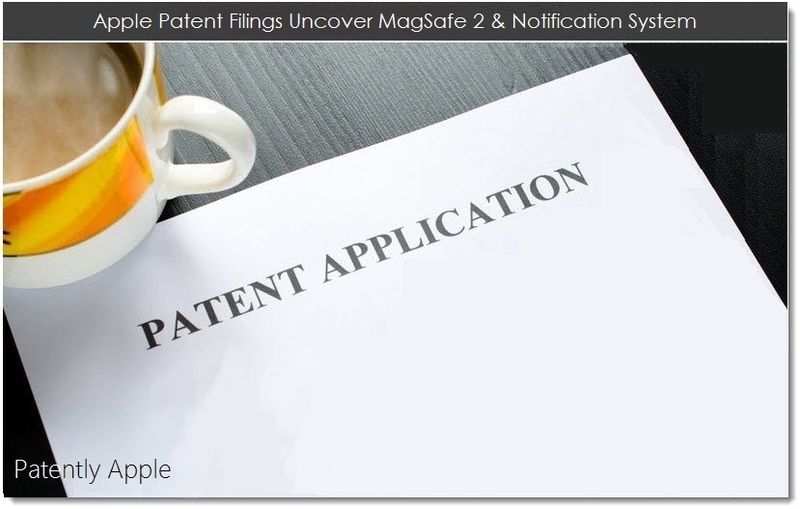 On January 3, 2013, the US Patent & Trademark Office published patent applications from Apple relating to their push notifications system and new MagSafe 2 connector. The new MagSafe 2 connector was announced at Apple's June 2012 World Wide Developer Conference in conjunction with the debut of the MacBook Pro 15-inch Retina Display. The new connector was designed to better fit the slimmer notebook designs. In late 2012, Samsung sued Apple over their push notifications system in Korea. It'll be interesting to see if Apple's notification system patent will get approved by the US Patent Office in time for this case – as Apple's system applies to both iOS and Mac hardware which could differentiate their system enough to strengthen their position.

Apple's MagSafe 2 Connector patent has come to light under the title "Robust Magnetic Connector." Technically speaking, Apple's invention relates to a connector receptacle having a power contact located in a ground surface. An insulating layer may be placed between the power contact and the ground surface which covers a plurality of magnets arranged to be attracted to a magnetic element in a connector receptacle. To avoid shunting the resulting magnetic field, the ground surface may be formed of a less magnetically conductive material, such as low carbon steel, titanium, stainless or other steel, and it may be relatively thin. 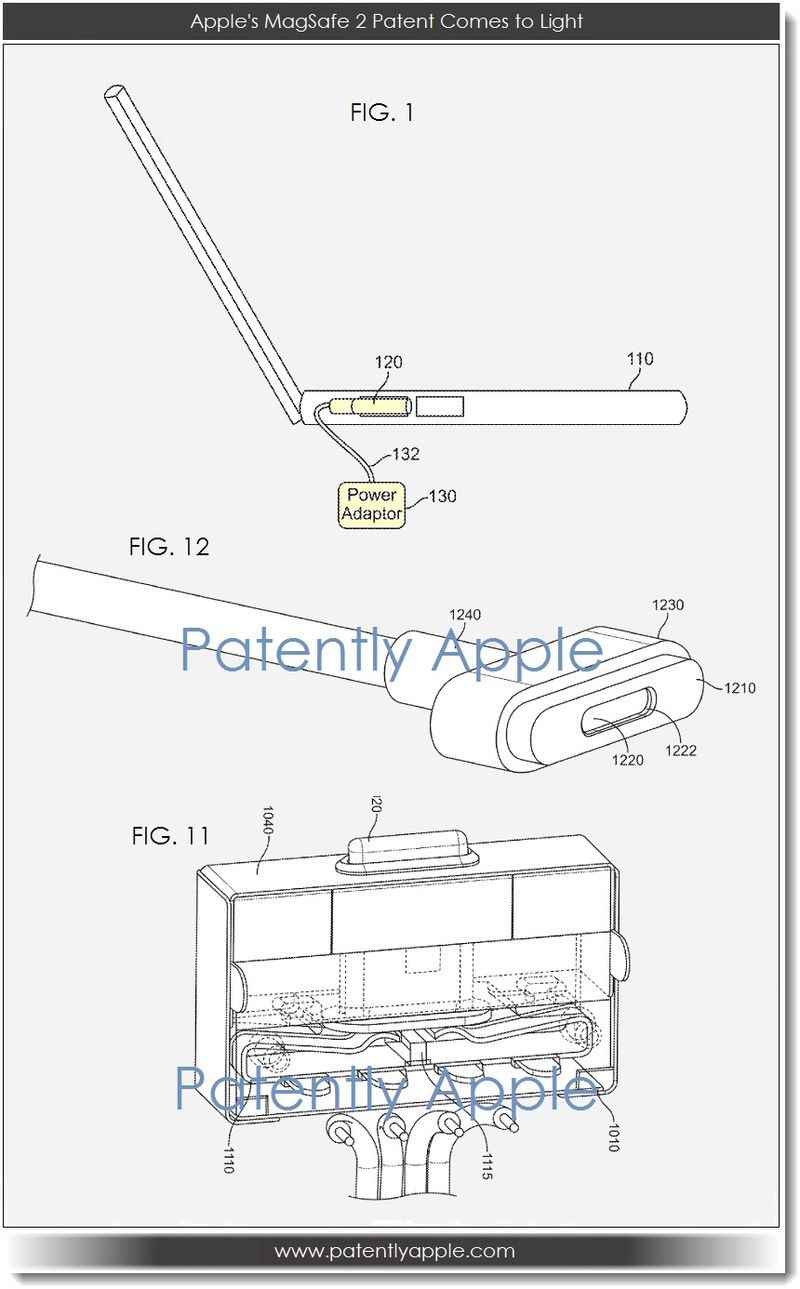 Apple's patent FIG. 11 noted above illustrates a cutaway view of a connector receptacle. The main spring noted as # 1110 in the patent figures may be formed using Titanium Copper, Phosphor-bronze or other appropriate material. Apple's patent FIG. 12 illustrates a connector insert whereby the power contact # 1220 may be formed of a highly conductive material, such as brass, copper-nickel-silicon alloy, or a silver alloy. Additionally, shell # 1230 may be formed using aluminum or other material.

APNS is used together with Mac OS X Lion Server to push update notifications to clients that have registered to receive updates via a configuration profile and are also using the server's mail, calendar and contacts services. This means that devices such as the iPhone and applications like iCal on the Mac can receive a notification.

On December 21, 2012 we reported that Samsung Sued Apple in Korea over their iOS Notifications System. Will Apple be fortunate enough to get their patent approved by the US Patent Office in time for this court case? Has Apple engineered the notification system differently enough to fend off Samsung (and Google's) case against Apple? Considering that Apple's system also works with a high-end and robust desktop OS, I think they have an angle that the Android patent doesn't offer and may be considered one of many work around solutions.

Apple's patent FIG. 3 shown below is a block diagram illustrating an exemplary API architecture for their notification system. Patent FIG. 7D illustrates a Banner styled notification. FIG. 9A presents a display screen shown to include a list of settings which can be displayed after the user selects the "Settings" option. 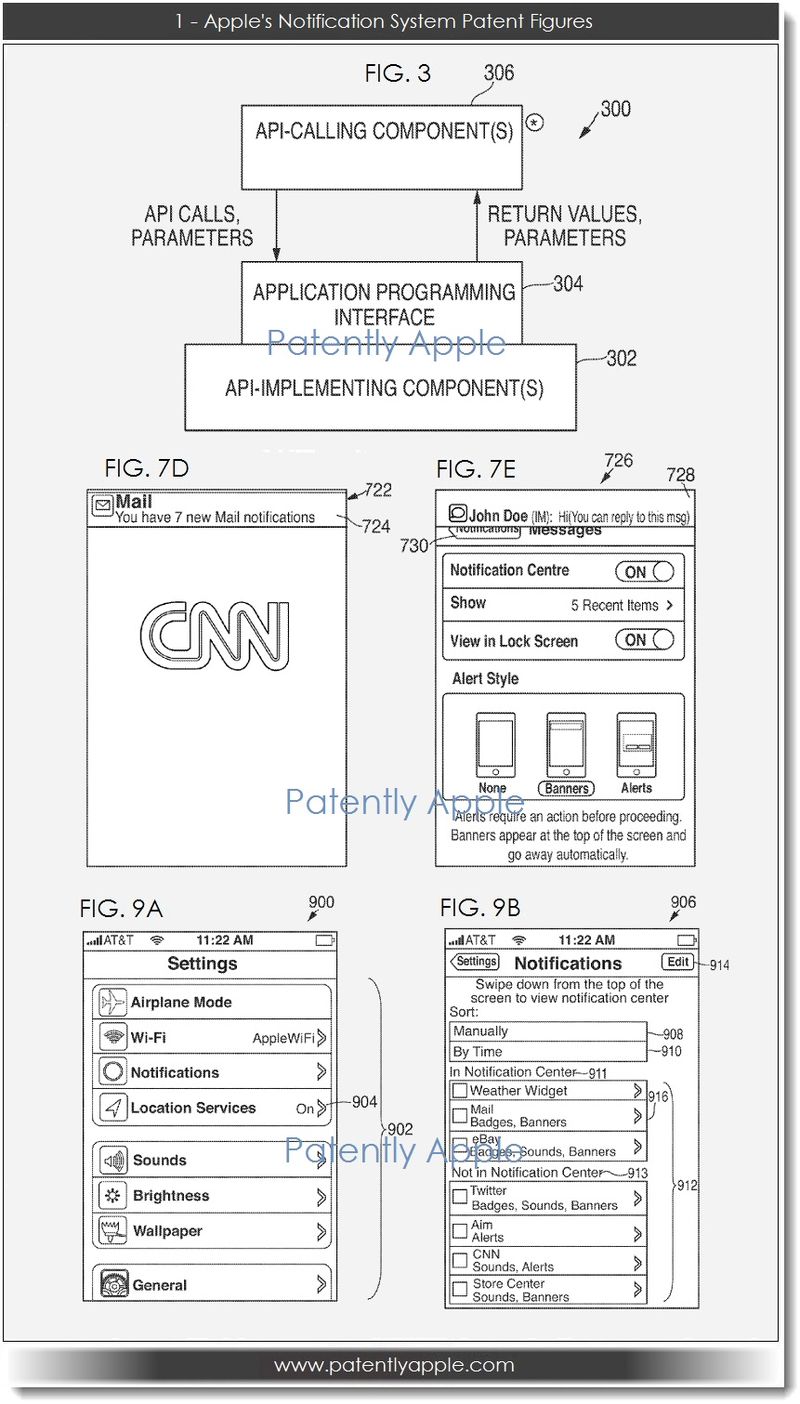 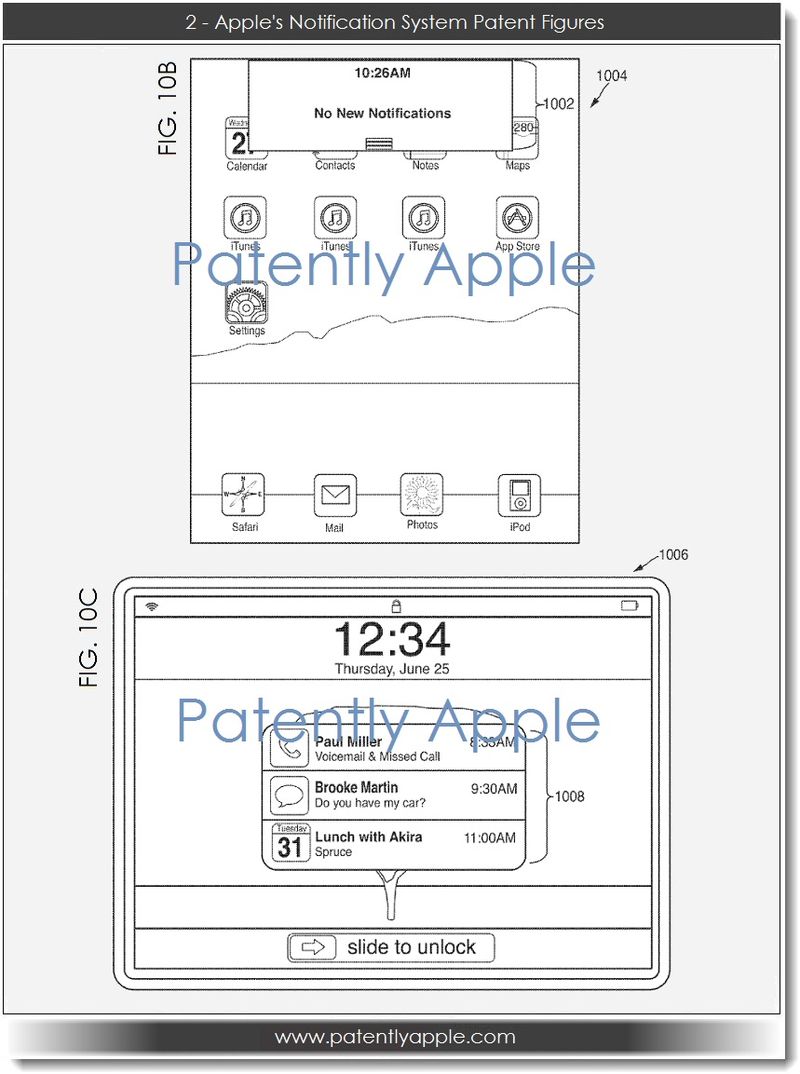 Apple credits Imran Chaudhri and Eliza Block as the inventors of this system. To view the details of this invention, see patent application 20130007665.

Here's a classic case where two Mac sites are reporting Apple's continuous patent 20130006790  titled "System and Method for Planning layout of a Retail Store"  as being a new patent filing when it's really a continuation of two patents filed in May. This is what today's continuous patent states: "This application is a continuation-in-part of U.S. patent application Ser. No.13/476,756 filed on May 21, 2012, which in turn claims priority to U.S. Provisional Application No. 61/488,696 filed on May 20, 2011, the entire disclosures of which are incorporated by reference herein for all purposes." So there isn't anything new here. In November we filed an original report covering the Apple store which covers much of what is covered in today's continuation patent.