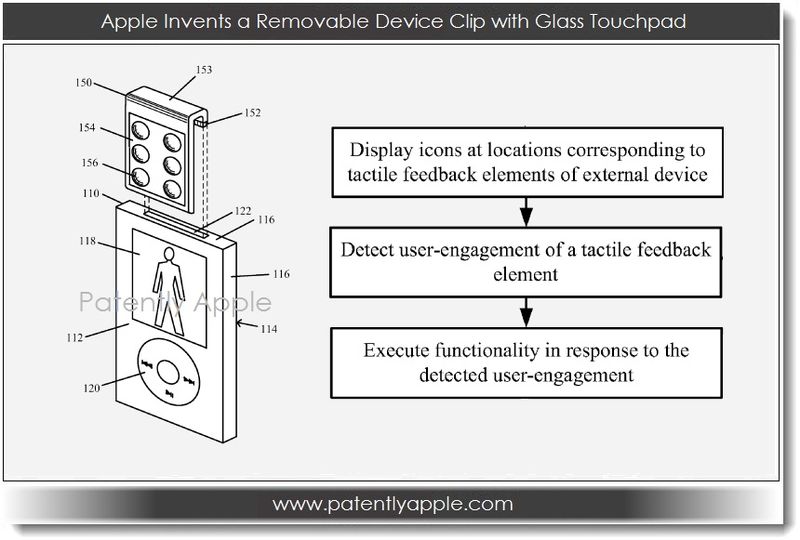 On January 17, 2013, the US Patent & Trademark Office published a patent application from Apple that reveals a new product in the form of a removable device clip. The advanced clip may offer tactile buttons or a transparent glass touchpad. The clip could be used as a remote control. The removable clip could be applied to an iPod, iPhone, iPad, MacBook and yes, even a "convertible notebook." If you like to bring your iPod or iPhone to a workout, the clip will be able to provide users with an added level of convenience with quick to control buttons. The clip will attach to devices via a magnetic mechanism.

While today's clips provide a valuable function for portable electronic computing devices, they are deficient in that the real estate used by the clips is underutilized in that the clips are only used to attach electronic computing devices to other objects. Such underutilization is particularly undesirable as technology continues to miniaturize since even the smallest amount of real estate used by a device is often considered burdensome by a consumer.

In one embodiment, the user interface may be configured to operate as a clip, and the user interface may be operable to display information (via, e.g., an LCD). By coupling the clip to an electronic computing device, the electronic computing device may thereafter display information on the clip via the user interface. In some embodiments, the display capability of the clip may be combined with the ability to receive user inputs (e.g., a touch pad may be layered over an LCD). In this fashion, a significant amount of functionality may be added to existing devices, and in some cases the device may also advantageously operate as a clip.

Various other features may also provide numerous other advantages over the state of the art. For example, the user interfaces may include tactile feedback elements such as rubber domes. In this fashion, a user may be able to easily cause the electronic device to perform a function without visually seeing the device or user interface.

Apple states that their newly designed removable clip could be modified to apply to an iPod, iPhone, iPad, camera, game player, MacBook and believe it or not Apple includes a "convertible notebook," which is one the first times they've used this phrasing – even though Tim Cook shuns the very thought of such a device ever being made by Apple. Some of the configurations for differing devices are shown below in the first graphic.

In some embodiments, the front surface of the clip could include an input element that may be operable to receive user inputs and show icons for play, pause, fast forward, rewind, volume up, and/or volume down.

As shown below in patent figure 2A, when a user wants to play a video while the clip is still attached, the video will automatically position itself below the clip so as to not interfere with their viewing. 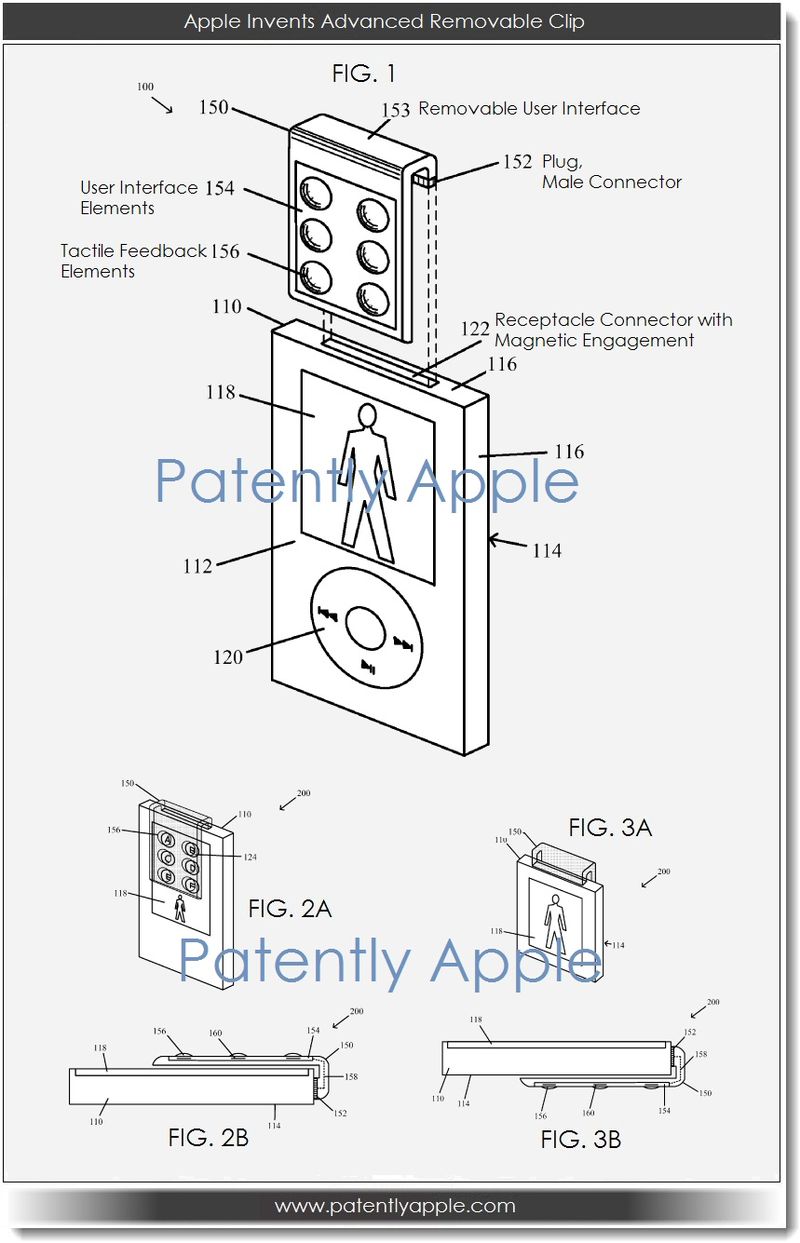 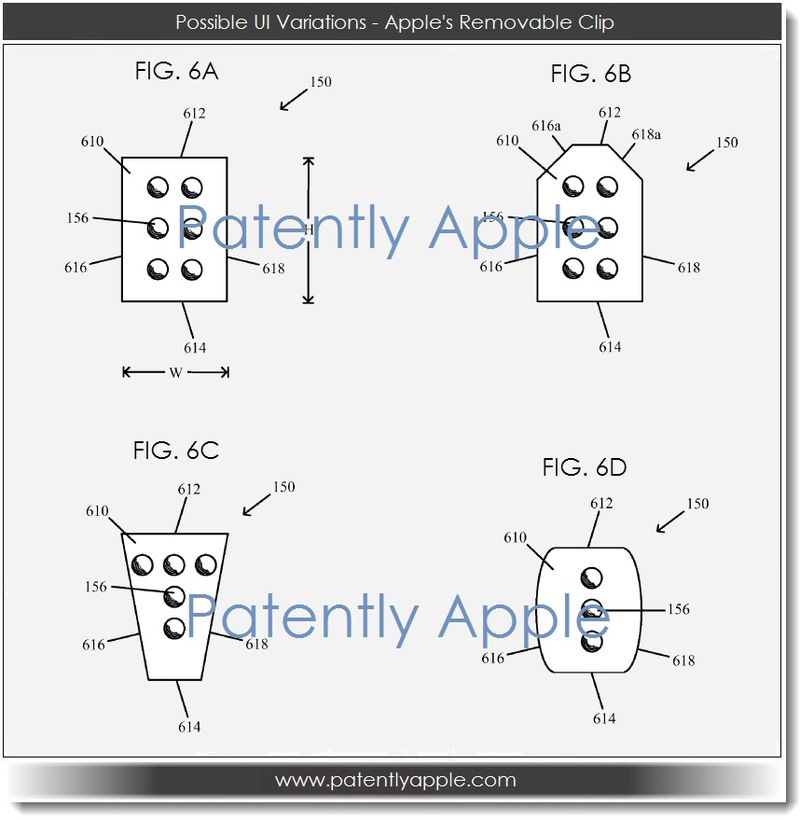 The tactile feedback elements shown above may provide stops to prevent the body from directly contacting a surface of electronic computing device. In such a case, tactile feedback elements may be made of material that is softer than the material which the electronic display is made of. For example, they may be made of at least one of silicon, rubber, cloth, soft plastic, etc. 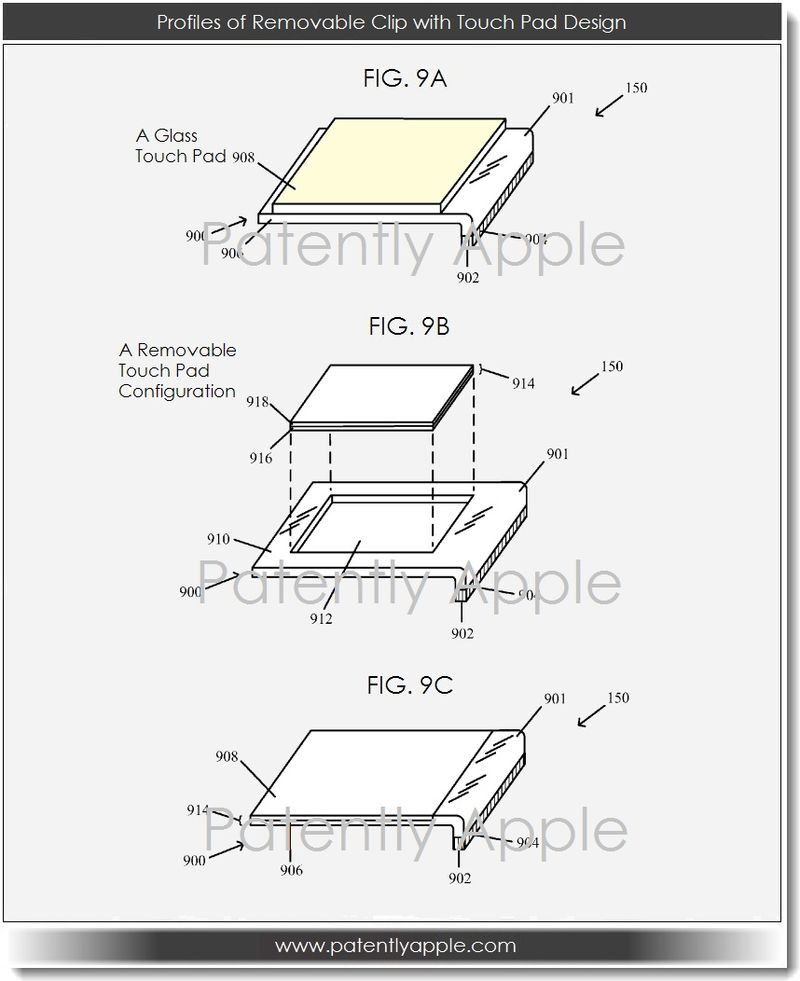 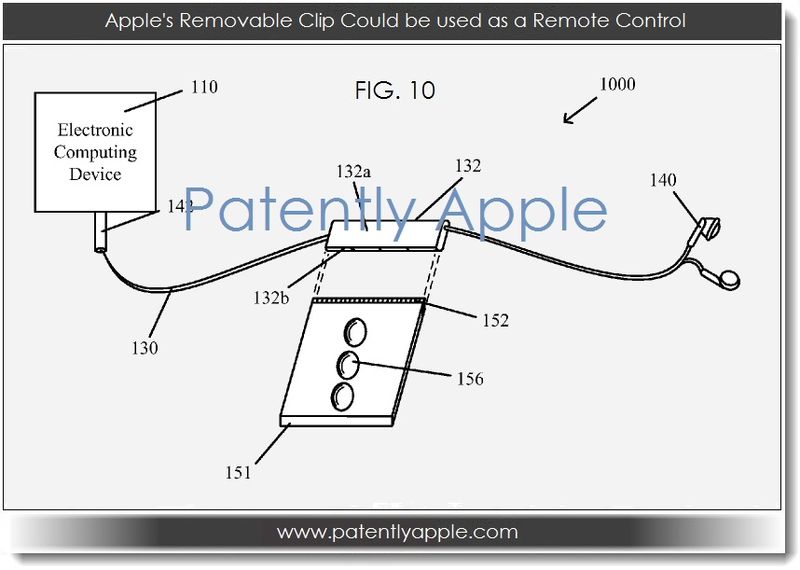 Apple credits Product Design Manager Fletcher Rothkopf and Teodor Dabov as the inventors of this patent application which was originally filed under serial number 180433 in Q3 2011.

A Note about Patent Figure Designs

It should be noted that patent figures represent conceptual products while pointing to specific technical aspects detailed in the patent application. Patent application figures aren't to be confused with prototypes or design patents illustrating the actual look of the commercial product.

New On Patent Bolt this Week

I can see this being cool for everything except the iPod/iPhone.