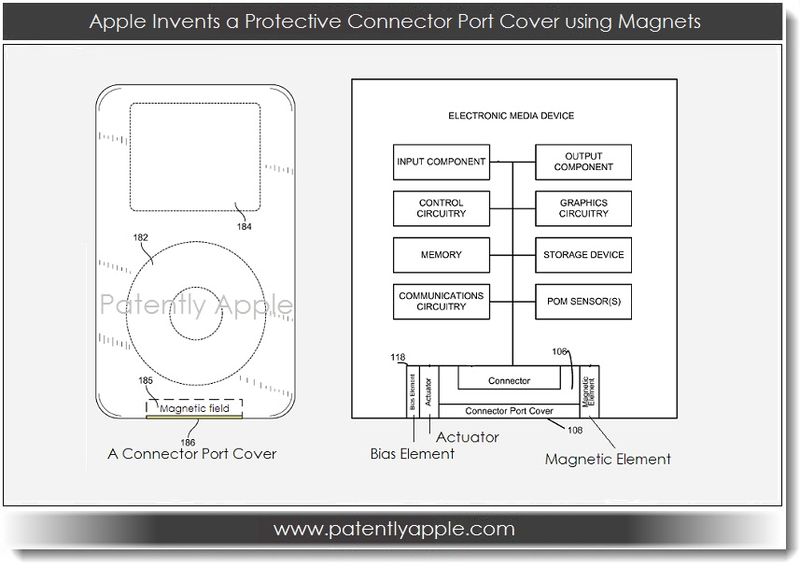 On January 17, 2013, the US Patent & Trademark Office published a patent application from Apple titled "Magnetically Activated Connector Port Cover" which is an invention designed to keep crumbs, pocket lint and fluids from entering your devices via their ports. Apple provides a simple yet creative solution.

Historically, some electronic devices included a connector port cover to prevent debris interference at the access location for external connectors. These covers sealed the connector port closed when not in use. Some connector port covers are cumbersome to operate between open and closed positions and may be easily breakable because space constraints led to less robust systems. In some instances, these factors have led to accidental or purposeful removal of the connector cover.

Some electronic devices have abandoned the inclusion of connector port covers for the aforementioned reasons. As a result, longer wiping distances may be implemented for electronic connectors to partly cope with the debris issues. However, this solution is not complete and requires a deeper connector. Consequently, connections can still be disrupted and scarce internal device space or other resources may be allocated to help remedy the debris issues. Hence, a need for connector port covers still exist, but the usefulness of future connector covers will depend on the extent to which the historical pitfalls can be overcome.

In one embodiment, a connector port according to Apple's invention includes an opening having a door movable between a closed position where the opening is sealed and an open position for receiving a corresponding connector plug through the opening. An actuator is operatively coupled to bias the door in the closed position with a bias force. A magnetically responsive element that, when the corresponding connector plug is proximate to the opening in the connector port, is responsive to a magnetic field to provide a second force greater than the bias force that moves the door to the open position. 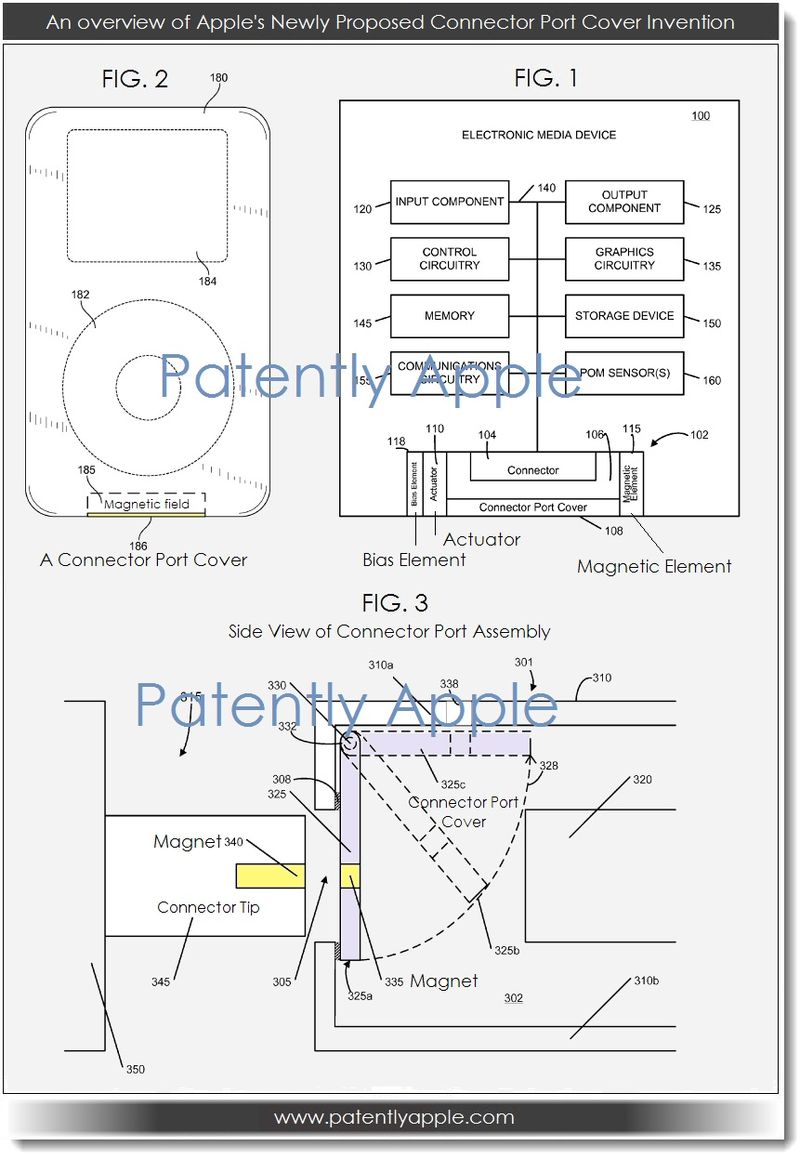 In the closed position, Apple states that port cover 325 covers opening 305 thereby preventing or limiting intrusion of solid particles such as dirt, crumbs, dust, lint and other substances which may otherwise enter into cavity 302 and be hard to clean or remove from the cavity. Over time, the accumulation of such particles may create potential for interference of or damage to the interface between connector 315 and connector 320.

Potential for fluid penetration may originate from wet or moist conditions including snow, rain, fog, humidity or liquid contact resulting from spills, splashing, spraying or other wetting events. Fluid penetration can damage or adversely affect the components at the connection interface and other components within electronic media device and/or or the connector.

Apple's patent FIG. 3b shown below is an angled front view or three-dimensional view of connector port cover 325 operatively coupled to a motor element 333 actuator instead of a spring loaded hinge. Motor element 333 can be, for example, a SQUIGGLE motor that is controlled or switched on/off by a sensor. 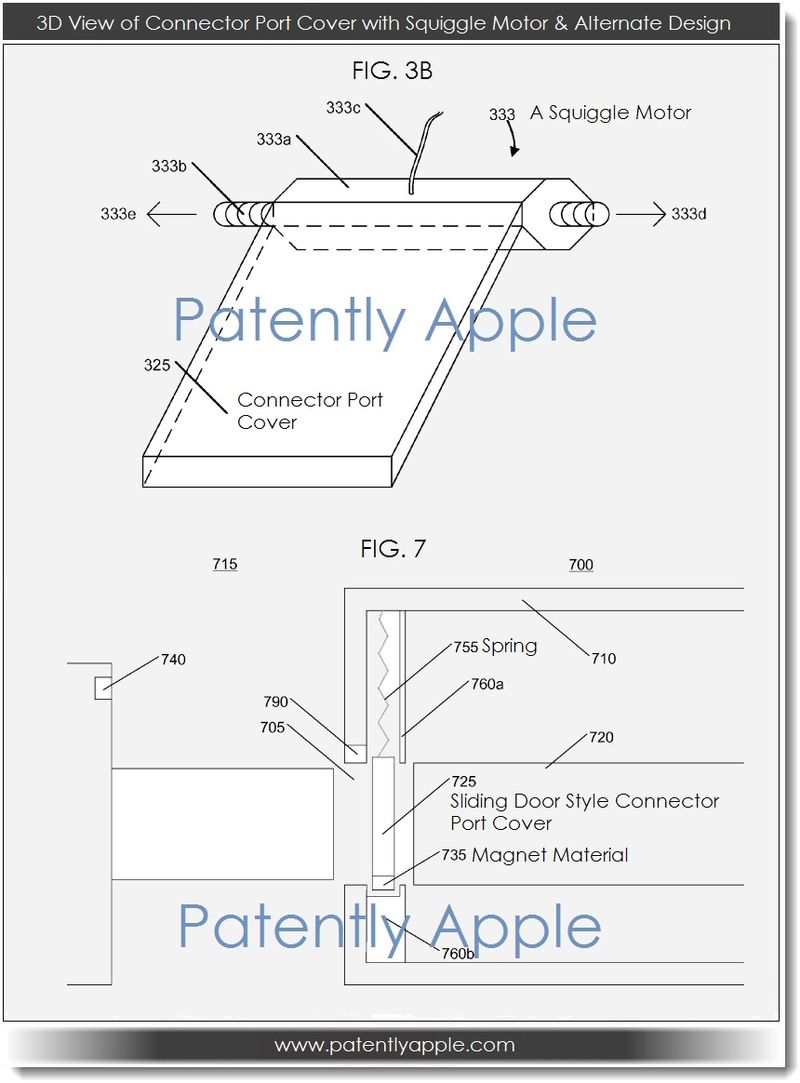 Apple's patent FIG. 7 shown above shows a side or top view of an illustrative connector port cover which may be likened, for example, to a sliding door. 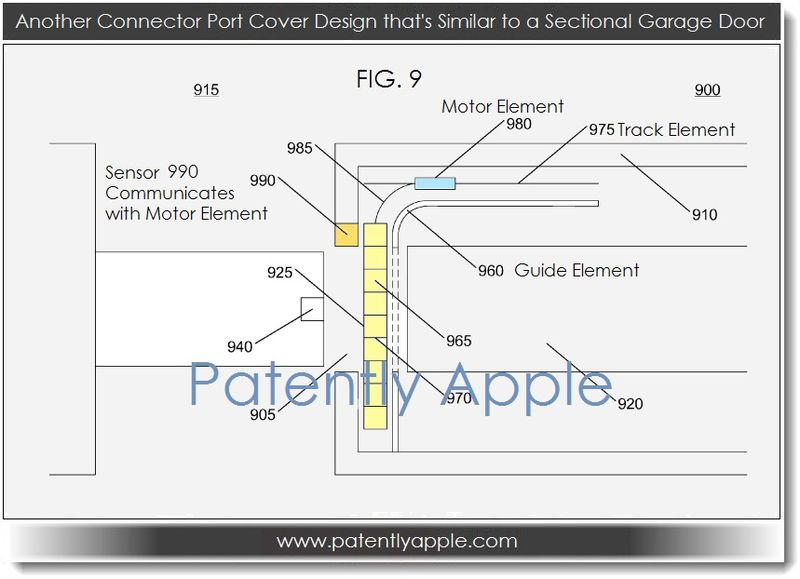 Apple credits Felix Alvarez Rivera as the sole inventor of this patent application which was originally filed under serial number 180326 in Q3 2011. Alvarez also worked on other Apple patents such as the October 2012 filing for using biometrics in a future iPhone.