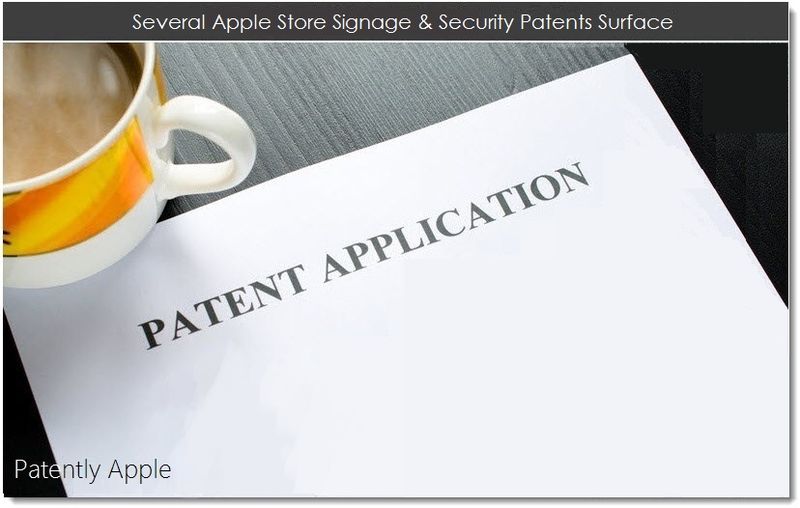 On November 22, 2012, the US Patent & Trademark Office published several patent applications from Apple that relate to their retail store signage and table-top device security. One patent discusses management of multiple dynamic signage devices that could be coordinated within and across stores, and an interactive floor-map creation system incorporating dynamic signage devices that could facilitate changing the associations between products and dynamic signage devices. If retail based technology happens to be of interest to you or if you're just curious as to how Apple designs their in-store signage, our report will point you to four distinct patents that you'll be able to research to your heart's content.

Apple's patent application 20120296777 covered below is titled "Dynamic Location-Based Signage." Dynamic signage systems are provided for a sales environment such as the Apple Store. A dynamic signage device, which turns out to be an iPad, is associated with promoting a product to a customer in an interactive manner.

Apple's patent FIGS. 1A and 1B illustrate a dynamic signage system that are present at Apple's retail stores. 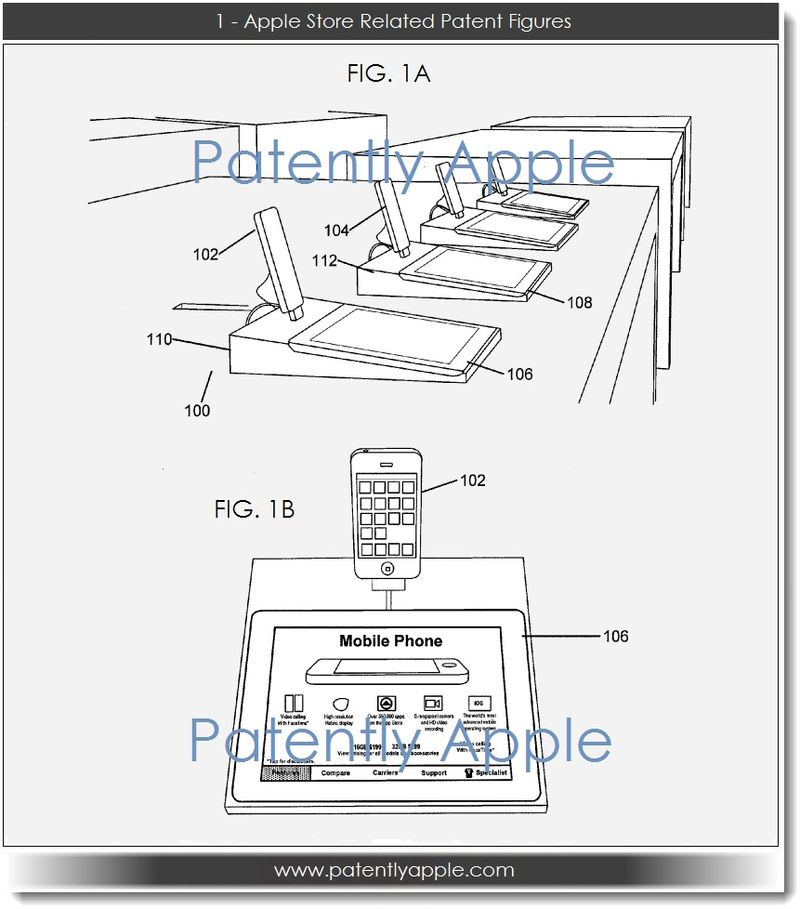 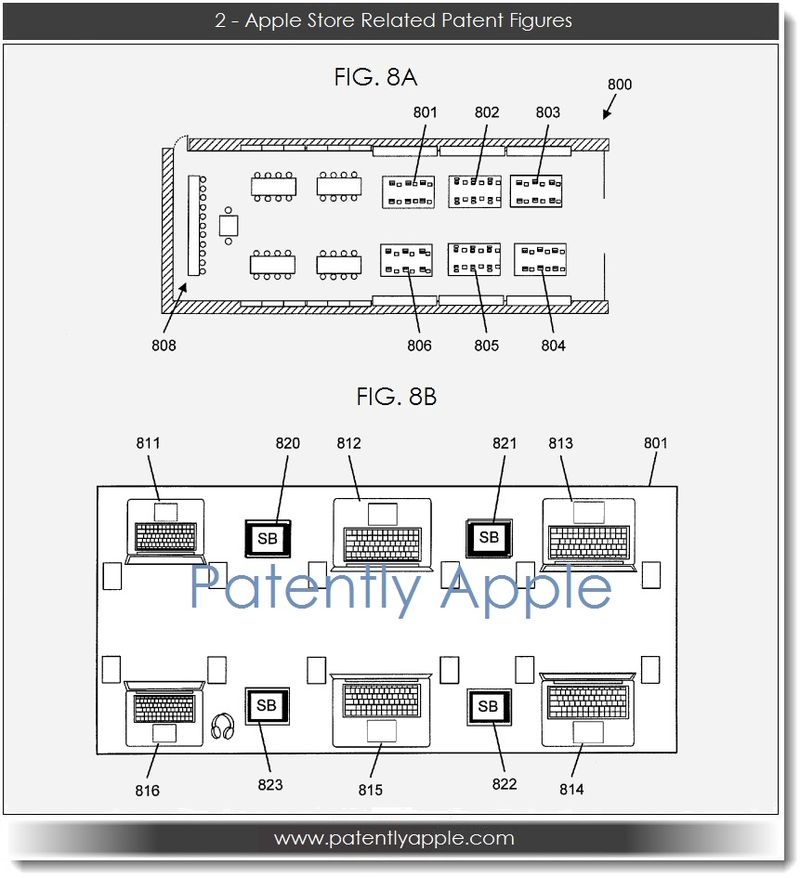 Apple's patent application 20120293924 titled "Docking Station for Providing Digital Signage," relates to a docking station with a recessed region for mounting an iPad flush with an upper surface of the docking station for the purposes of providing digital signage. 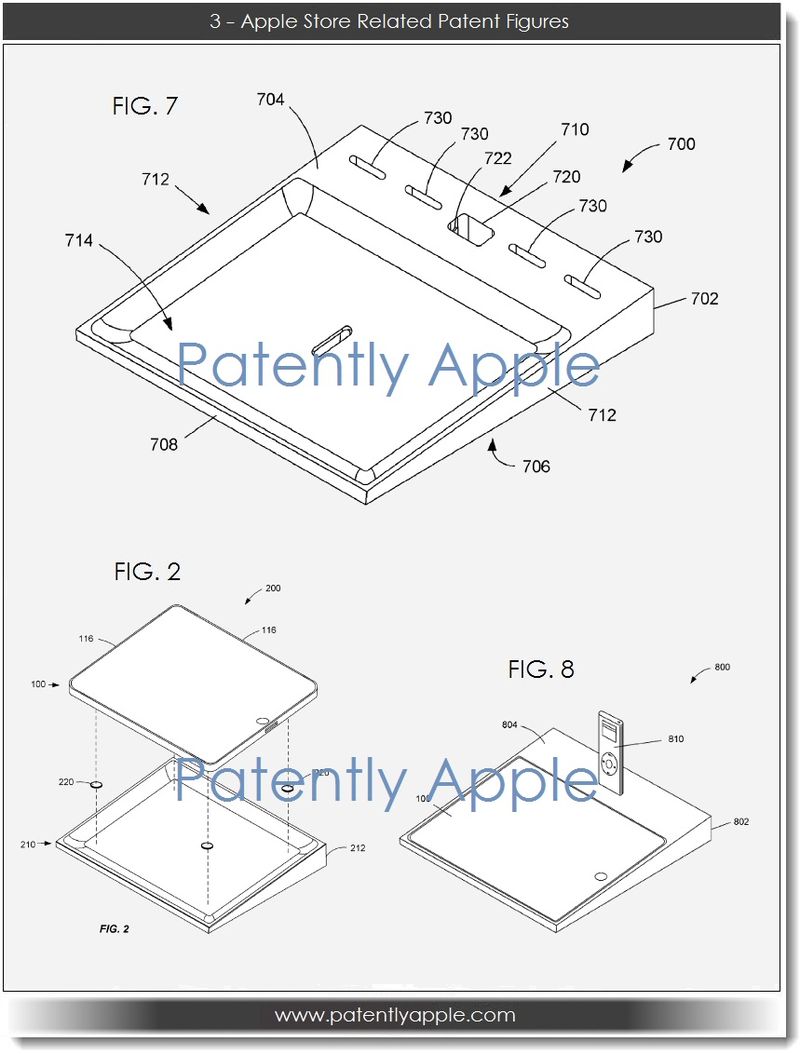 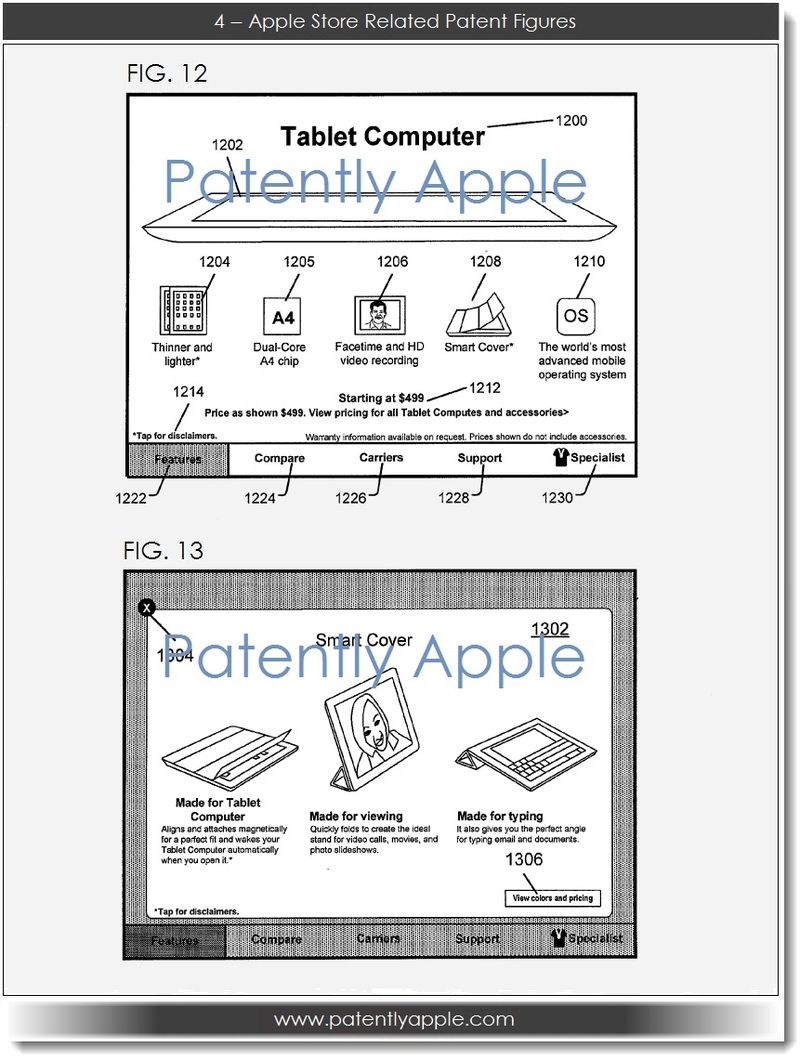 Apple's patent application 20120295462 titled "Connector with Locking Mechanisms," relates to a specialized 30 pin connector of a cable that could be used to facilitate various security-related features and other functionalities as they relate to a retail environment such as the Apple Store.

Apple states that these embodiments shown below enable improved user experiences within retail environments. More specifically, by integrating security support with other functionalities (e.g., power transmission) into a single connector, embodiments could allow the number of required connectors and cables needed in a retail display to be reduced.

When you compare the great job that Apple has done to reduce the "security feature bulk" behind a device when compared to handsets secured at Best Buy, for example, you're able to experience the care that Apple has taken to ensure that users are able to get their hands around a device like an iPhone  or iPod touch without constantly fighting with the huge metal security clasps present on smartphones at Best Buy. The consumer experience is 100% better at the Apple Store. 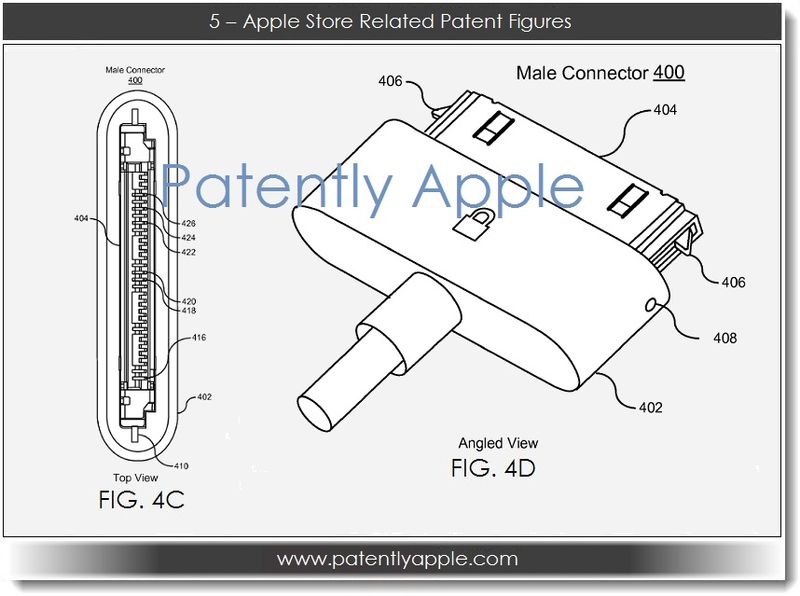 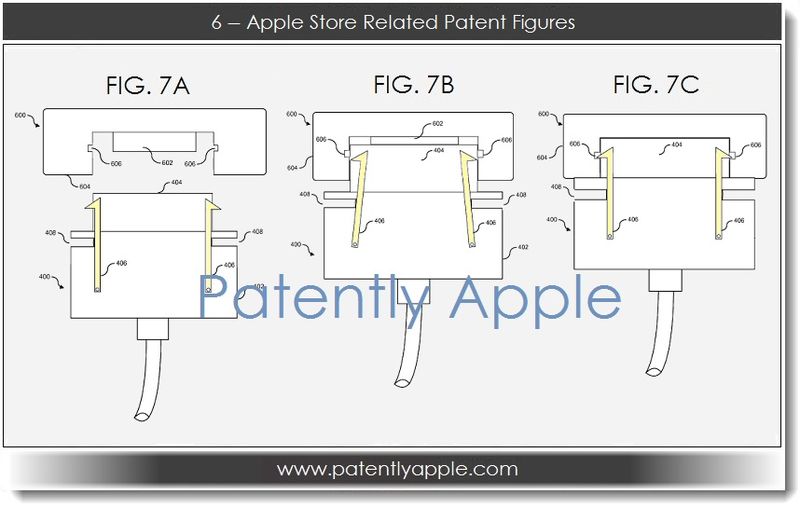 Apples patent FIGS. 7A to 7C illustrate the engagement of a male plug connector to a female receptacle connector.

Apple's patent FIGS. 8B and 8C shown below illustrate a bottom and angled view of the exemplary unlocking tool. 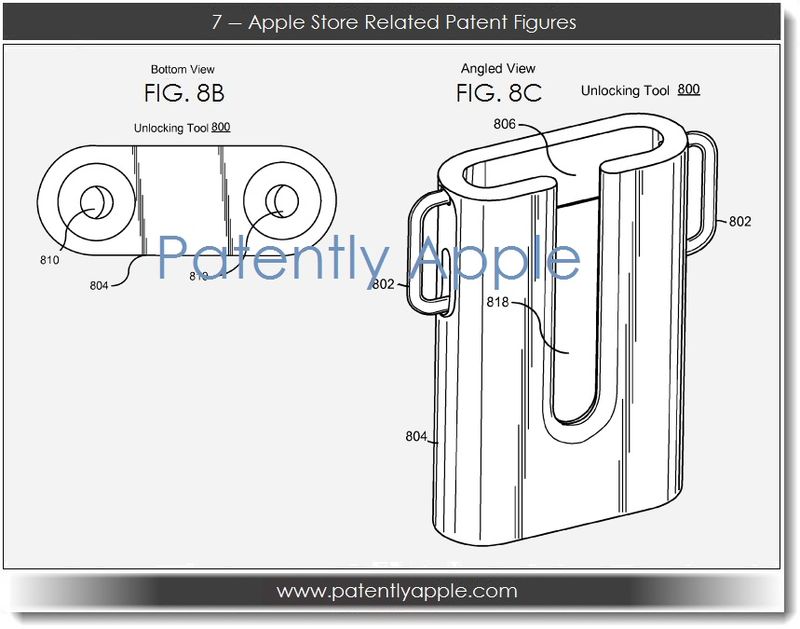 Apple's patent application 20120295487 is titled "Low Profile Male Connector." Apple's invention relates to a low profile male connector adapted to be fully insertable into an electronic device and contoured to match an outer surface of the electronic device. 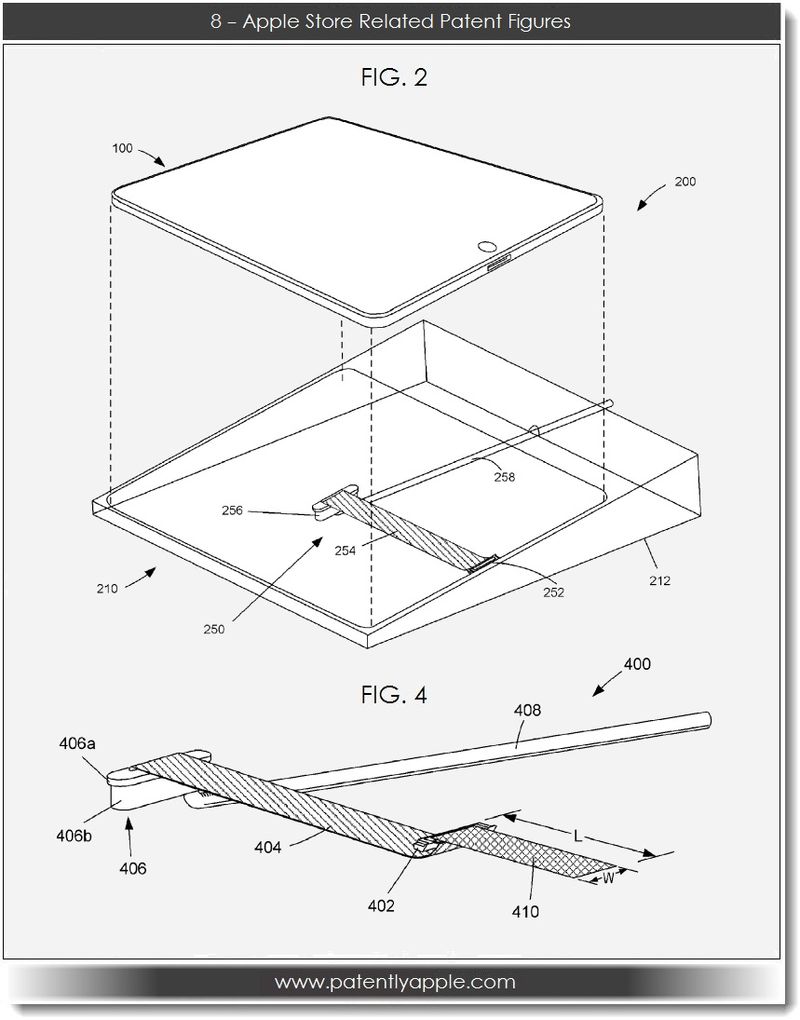 Apple's patent FIGS. 2 and 4 illustrate a digital signage system including a cable assembly.

this time some good patents showing :)