On November 22, 2012, the US Patent & Trademark Office published a patent application from Apple that reveals a new customer service application specifically designed for iDevices. The project was spearheaded by Benjamin Vigier Product Manager - Mobile Commerce at Apple. Mr. Vigier who came to Apple in 2010 has valuable NFC experience having worked with French mobile operator Bouygues Telecom, an early backer of NFC. Today's revelations show us that for those fortunate enough to live in a city where there's an Apple Store, the newly designed customer service form will help to check users in to see a Genius Bar representative or a workshop/event in a more convenient way. The form will activate automatically on iDevices as they near an Apple Store and provide customers with queue times and other reservation information. Apple's online and in-store service is the very best in the industry today hands down. It now it appears that it's about to get even better.

In order for any merchant to be successful, providing excellent customer service is considered a must in today's competitive environment. Merchants who own or operate a retail establishment have additional challenges when it comes to providing customer service. A common consumer, e.g. an individual, who often visits such retail establishment, is not usually as sophisticated as a corporate customer. The common consumer usually needs extra help in understanding various features of a product that he/she is interested in. Often, interaction with a knowledgeable salesperson could make a huge difference in whether the consumer purchases a product or not.

Apple's invention generally relates to techniques for providing customer service. Specifically, some embodiments of the present invention provide a customer service application that is resident on a user's portable electronic device that could be used for accessing information about products and services available at a particular retail establishment or store.

Some embodiments of the present invention provide a method for determining when a user is within a predetermined distance or within a service area of a store and automatically providing information about the products, services, or events offered by the store to the user via the customer service application on his/her mobile device. In addition, the user could use the customer service application to manage his interaction with the store and its employees.

Other embodiments of the present invention provide techniques that could help the user keep abreast of his previous and/or ongoing interactions with the store or store personnel even after the user walks out of the store and is farther away from a predetermined distance from the store. 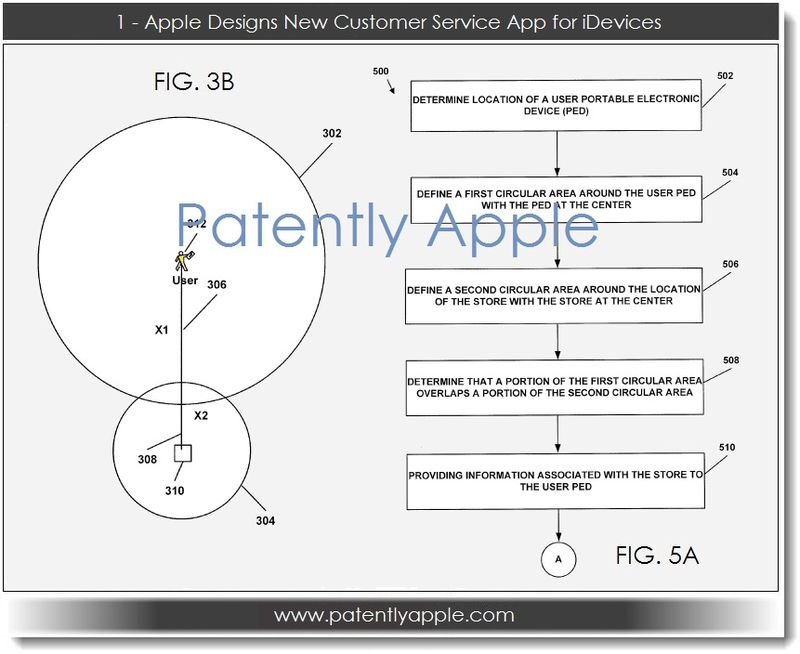 Apple's patent FIG. 3B noted above is a schematic illustrating a technique for determining when to display store related information on a user's portable electronic device. Apple's patent FIG. 5A is a flow diagram of a process for interacting with a store host server computer using the customer service application. 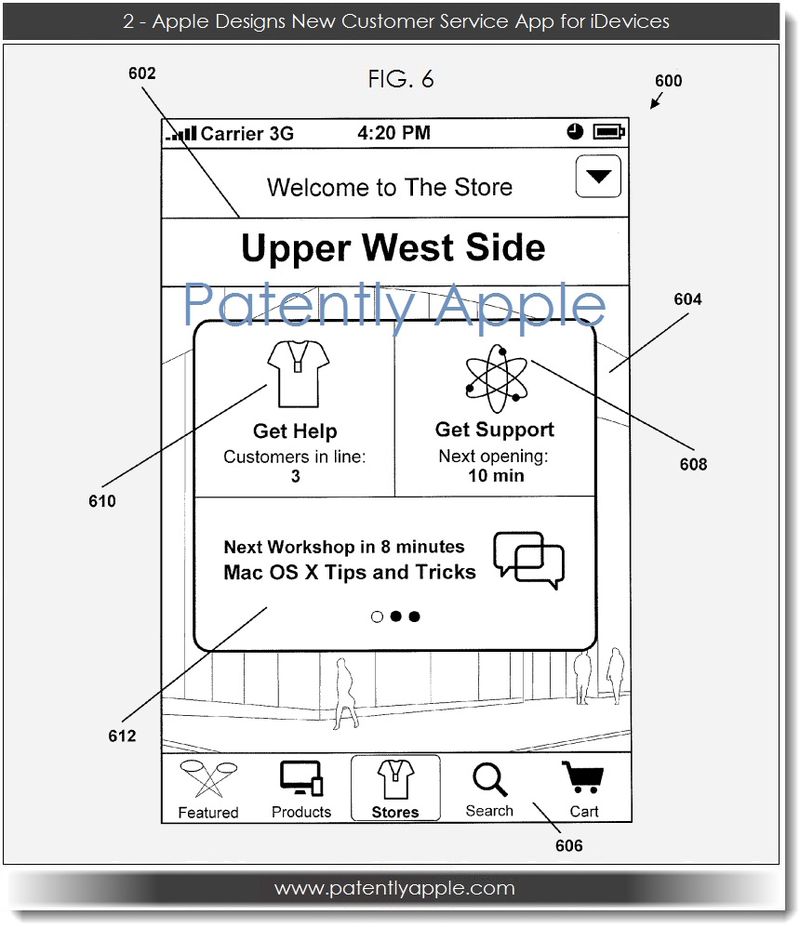 Apple states that once the user is successfully checked in, the customer service application could display screen 710 of FIG. 7F noted above, informing the user that they have been placed in the queue and will be alerted once someone is ready to help them. The user will then be able to continue browsing the store until they receive a message indicating that someone is ready to help them.

In some embodiments, the host server computer may send, and the customer service application may display name of the technical specialist and a location to meet the specialist. Screen 712 could provide an option to the user to indicate their acceptance to meet the employee and/or to cancel the request if the user meantime finds what he/she is looking for.

In some embodiments, while the customer is waiting to be helped by a specialist, the customer service application could display a ticker on the screen informing them of their position in the queue. The ticker could be periodically updated to reflect the change in queue status and position of the user. The ticker could be located on the screen in a manner so as to allow the user to perform other functions using their portable electronic device (PED) while they wait for someone to help them. 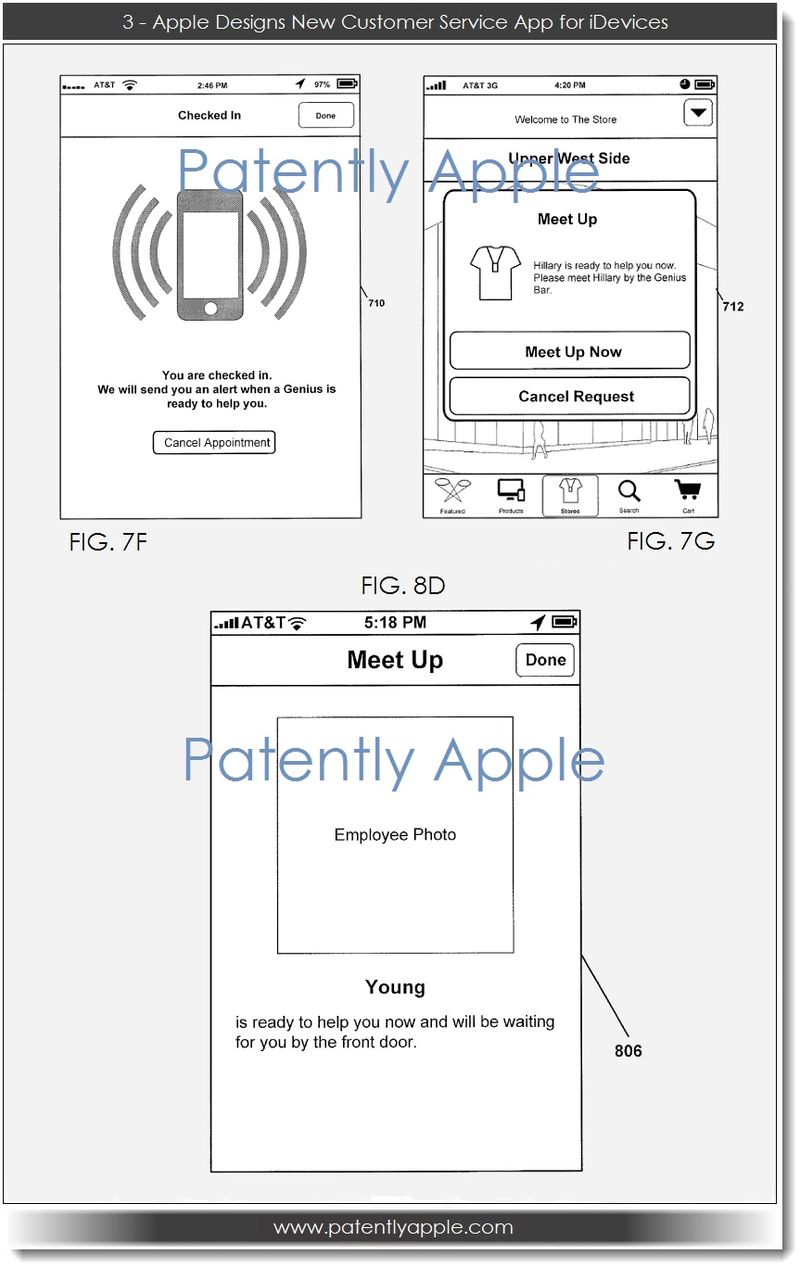 Apple points out that in some embodiments, the customer service application will be able to display an Apple employee name, and optionally a photo, along with a location in the store where to meet up with the repo as shown in patent figure 8D above. 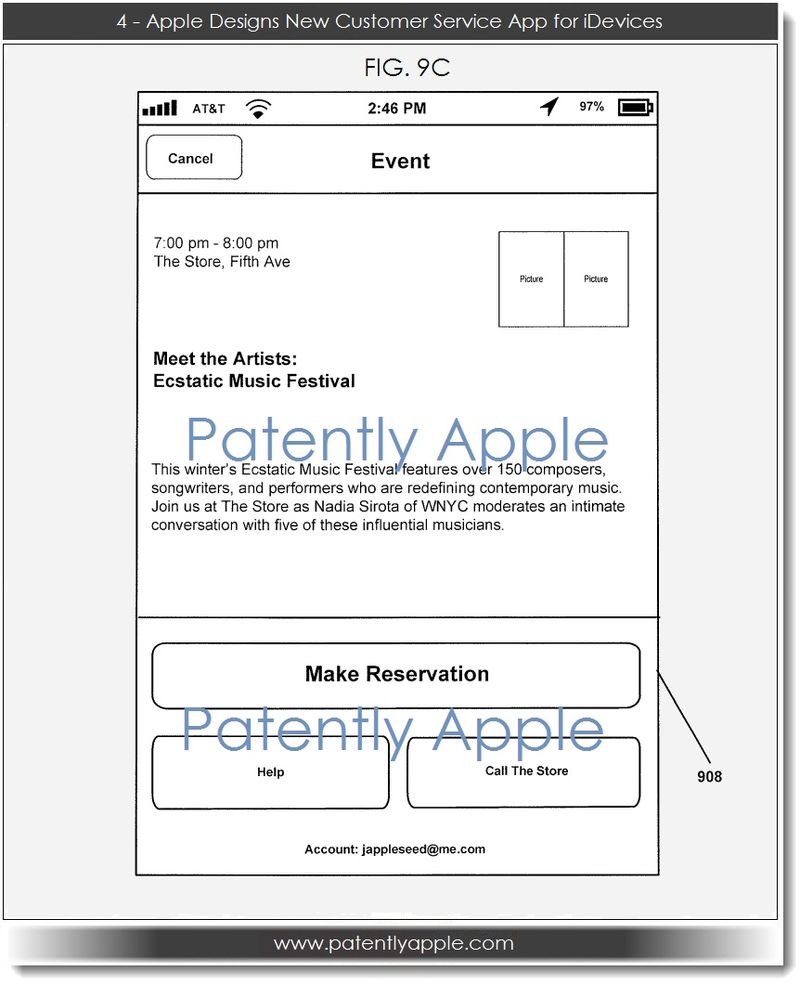 A Macite by the name of Paul Brice was good enough to email me this evening to say that the Apple Store App is already available on iTunes/Apple Store.  Considering that Apple only filed for the patent this past May, it's safe to say that they're a little behind the curve here by a country mile.

When you download the app, like I just did, you won't be able to see some of the screenshots that are associated with the patent until you actually go to the Apple Store with a reservation in-play. But now that I see what the patent describes, I'll be sure to try it out in 2013. I wish I would have had it last week as I was at the Genius Bar with a reservation.

According to iTunes/Apple Store, the App was just updated on November 7, 2012 to version 2.4 with support for Siri and the new "EasyPay" feature which sounds interesting. Below is one screenshot that matches one of the patent graphics noted above. 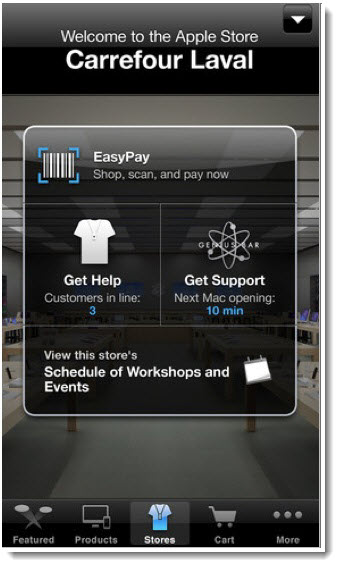 Thanks Paul, I appreciate the feedback.