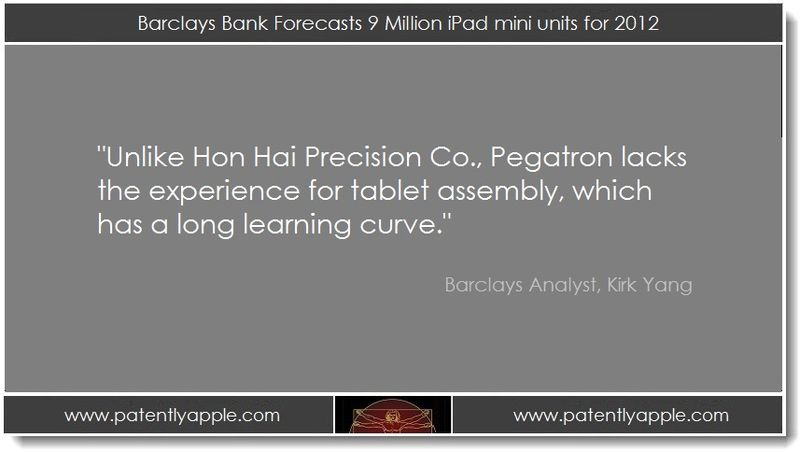 Research notes from British bank Barclays show that Apple is still on target to release the iPad mini in 2012 and should sell up to 9 million units. Production in one plant has reduced the number of iPads that were expected for the year.

British bank Barclays reports that Taiwan's Pegatron has an initial yield rate of Apple's smaller iPad that is low. In a research note dated Sept. 27, Barclays said it expected Pegatron to ship 3 million units of the iPad mini in the fourth quarter.

Barclays had originally forecast that Pegatron would assemble 70 percent of the total iPad mini production this year, but the ratio was revised down to only 30 percent because of Pegatron's likely yield rate issue, reports Focus Taiwan.

"Unlike Hon Hai Precision Industry Co., Pegatron lacks the experience for tablet assembly, which has a long learning curve," Kirk Yang, a Hong Kong-based analyst at Barclays, wrote in the note.

In particular, the new iPad mini is expected to have a narrower bezel allowing for a larger screen in the 7.85-inch form factor, causing a relatively lower assembly yield rate than the 9.7-inch iPad version, Yang said.

Taiwan's Hon Hai, which was currently the exclusive assembler of iPads, would assemble 6 million to 7 million units of the iPad mini, or 60 percent of the total allocation for 2012, he added.

Although Barclays' analysis suggested that the mass production of iPad minis had been delayed to October from September on account of supply constraints of some key components, Yang believed Apple would not postpone its iPad mini launch.

"As most iPad component vendors ramp up shipments in September that would continue into the fourth quarter of 2012, we do not see any signs of a postponed shipment schedule, suggesting an on-time October product launch," he noted.

Other news from Taiwan this morning is that Taiwan's information Minister and government spokesman faced heavy criticism for posting a picture of an iPhone on his Facebook page. Trying to avoid uproar, the minister stated that he didn't yet possess the iPhone and was only considering it.

Nationalism is running high in Taiwan of late. In mid-August we reported that Taiwan's Economics Minister Shih Yen-shiang urged the public to show more support for HTC Corp., a Taiwanese smartphone maker. The Minister stated that the public should cherish the country's own brand." In late 2011, the Premier of Taiwan even took a shoot at Apple. The latest incident with Taiwan's information minister over the weekend was in context to an outcry for supporting HTC.

At the end of the day, we fully understand the Minister's lust for the iPhone 5 and his need to conceal it from the stance the Taiwanese government is taking. I say – Enjoy your iPhone 5, Minister Hu Yu-wei – you're only human.