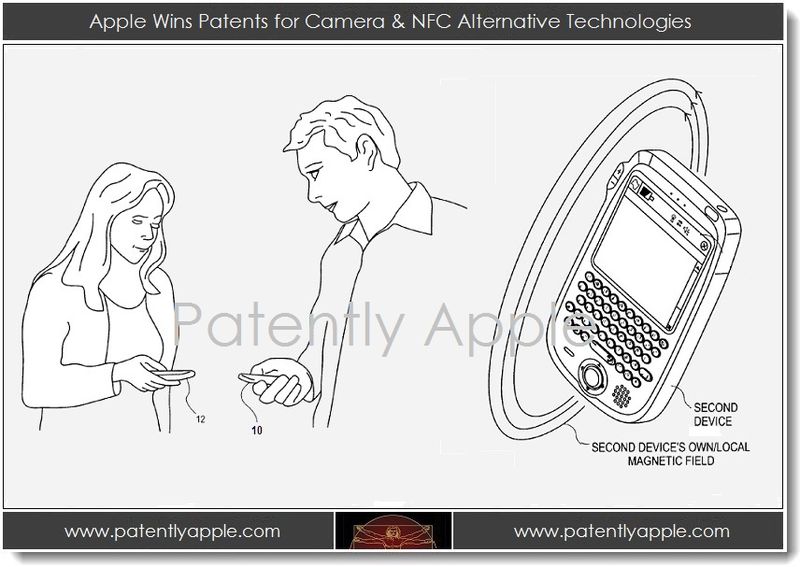 The US Patent and Trademark Office officially published a series of thirty-two newly granted patents for Apple Inc. today. In our final granted patent report of the day we focus on Apple's new NFC Alternative technology, a patent on location services and several camera related patents. And of course, we round off our report with a series of granted patents in our Final Patent Round Up covering an eclectic mix of technologies from virtual keyboards on through to multiple-use acoustic ports.

Apple has received a Granted Patent relating to techniques for triggering a process within a portable electronic device that identifies itself for purposes of establishing communications with another device that is in proximity. At the moment, NFC is the technology that's getting all of the attention lately in respect to making it easier for two mobile devices to share information. While Apple is likewise doing research with NFC, they're also working with an alternate methodology for which they've now gained a patent for. 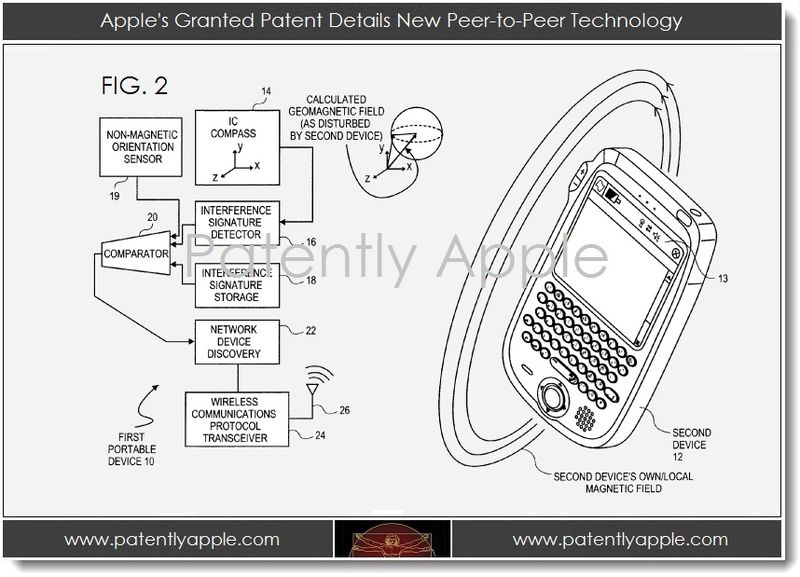 In accordance with Apple's newly granted patent, a method for network device discovery monitors a compass output in a portable electronic device. As the portable device and an external device come closer to each other, a magnetic field signature is computed based on the monitored compass output. A determination is then made as to whether the computed signature could be associated with or implies that a previously defined type of electronic device (with which a network device discovery process can be conducted) is in close proximity. In other words, as the two devices come closer to each other, their respective magnetic characteristics cause the compass output to change in a way that implies that a network device discovery process should be initiated between the two devices.

Apple Receives Granted Patent for Location Based Services for iPhone

Apple has received a Granted Patent that relates to location based services. 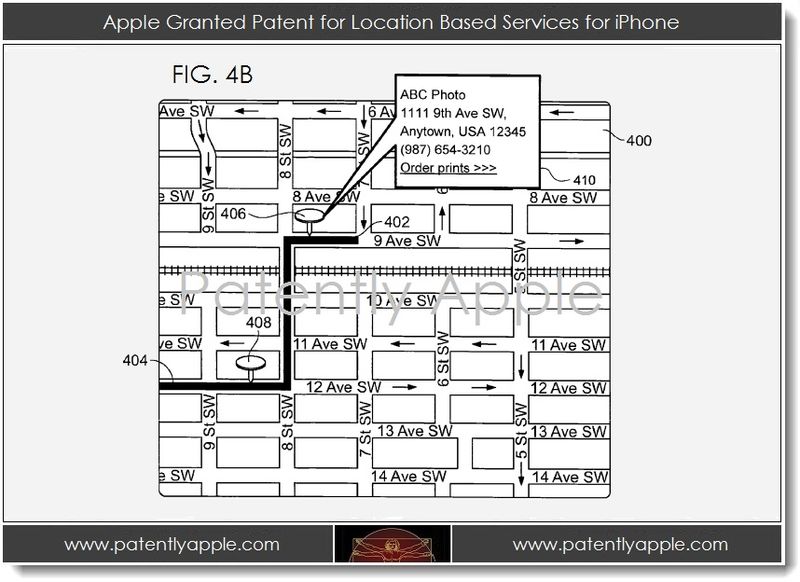 Apple credits Senior VP of iPhone Software Scott Forstall and his team consisting of Gregory Christie, Robert Borchers and Kevin Tiene as the inventors of this granted patent which was originally filed in Q1 2008. For more details, see granted patent 8,290,513.

Apple has received a new series of Granted Patents today that relate to iDevice camera technologies. One of the main patents is titled "Using distance/proximity information when applying a point spread function in a portable media device."

Apple states that Image sharpness may be improved by focusing the optical image properly onto the image sensor that is part of the camera circuitry in the device. A moveable lens system, normally present in a higher end dedicated digital camera, can be used to achieve manual or automatic focusing. However, most smart phones lack such a feature since it tends to increase power consumption as well as result in additional bulk.

Apple's granted patent relates to a relatively low cost technique for improving the sharpness or quality of digital images captured by a handheld portable media device. A housing of the device has integrated therein a digital camera image sensor, a camera lens, and a sensor that detects a distance measure, which is a measure of distance between the housing and an object or target in a scene that is before the lens. The device is programmed to select a point spread function, PSF, based on the detected distance measure. The selected PSF is then applied to de-blur the captured image, for becoming the final picture of the scene that is taken by the user. 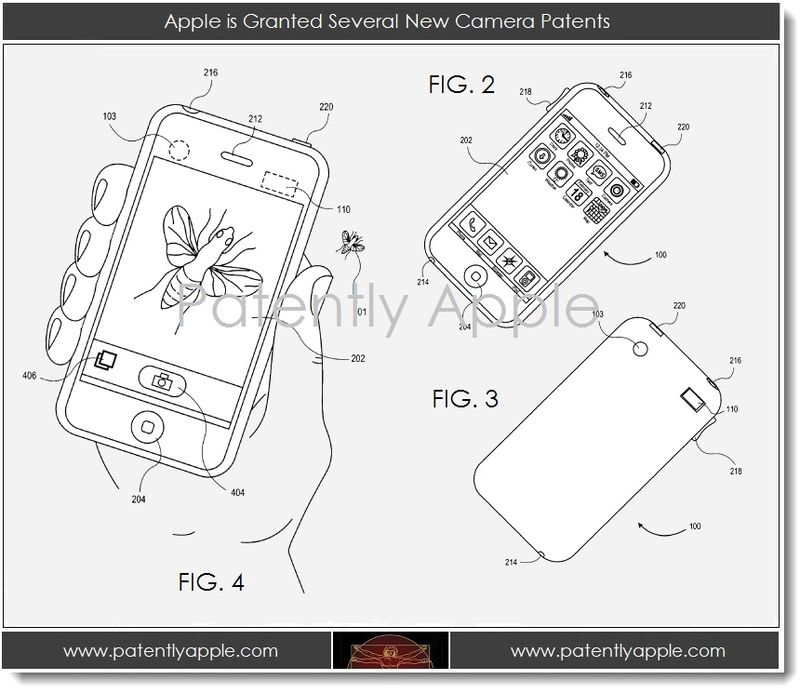 Apple credits Michael Yeh as the sole inventor of granted patent 8,289,438 which was originally filed for in Q3 2008. Another camera patent is titled "Image capturing device having continuous image capture." Apple was granted a related patent back in May 2012. A third camera patent granted to Apple today is titled "Image sensor with photosensitive thin film transistors and dark current compensation." For more on that, see granted patent 8,289,429.

Over and above the granted patents that were specifically reported on today, we present you with links to the remaining granted patents in our Final Patent Round-Up as follows:

8,289,283 - Language input interface on a device (The Virtual Keyboard Patent)

8,289,813 - Devices and systems for outputting contextual information about an event for
which an alarm is set on an electronic device 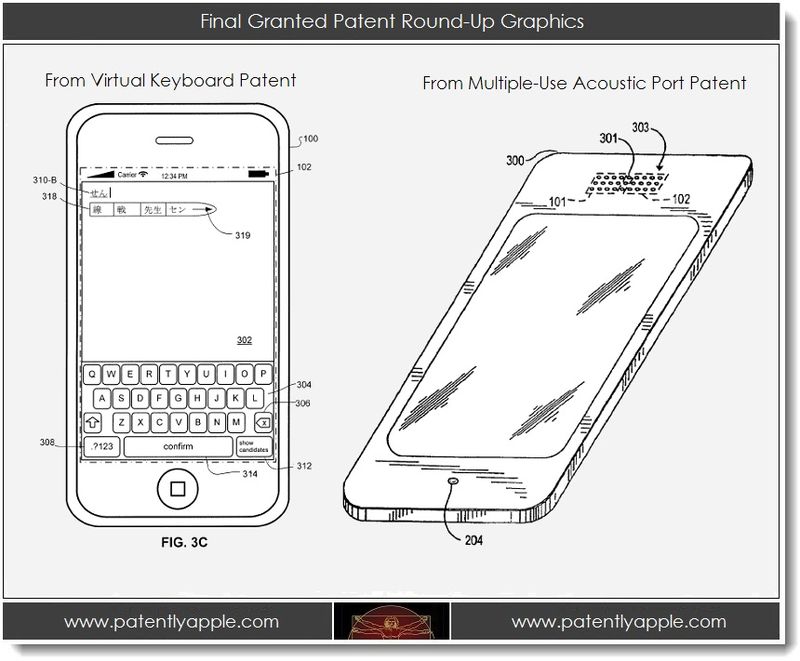 8,289,130 - Systems and methods for identifying unauthorized users of an electronic
device

Some times Apple will acquire a patent with a good idea and the original inventor chose the graphic of a generic mobile device.

This isn't a design patent, Ed, so the concept is what matters here not the drawing. Unless it's a design patent, Apple is not obligated to show you a final product. Some of Apple's initial iPhone drawings were simply a big thick box. Obviously that's not what we ended up with. So stay focused on the substance of the NFC alternative technology rather than the shell of the device.

The first drawing in the 'Apple wins patent..." article may raise eyebrows.
The 'SECOND DEVICE' does not look like any Apple's device. Was is copied or plagiarized from another company's product with relocated function keys? Perhaps the name of the company that had such design should be spelled out or reference. Blackberry, maybe?