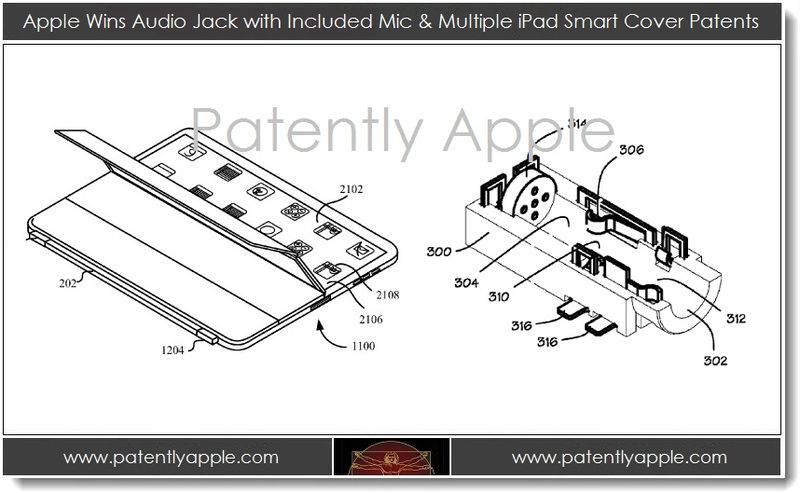 The US Patent and Trademark Office officially published a series of thirty-two newly granted patents for Apple Inc. today. In this particular report we cover a new audio jack with included microphone patent that actually may foretell of a future iPhone feature. Our report also covers multiple wins for Apple's iPad Smart Cover and others relating to headsets. 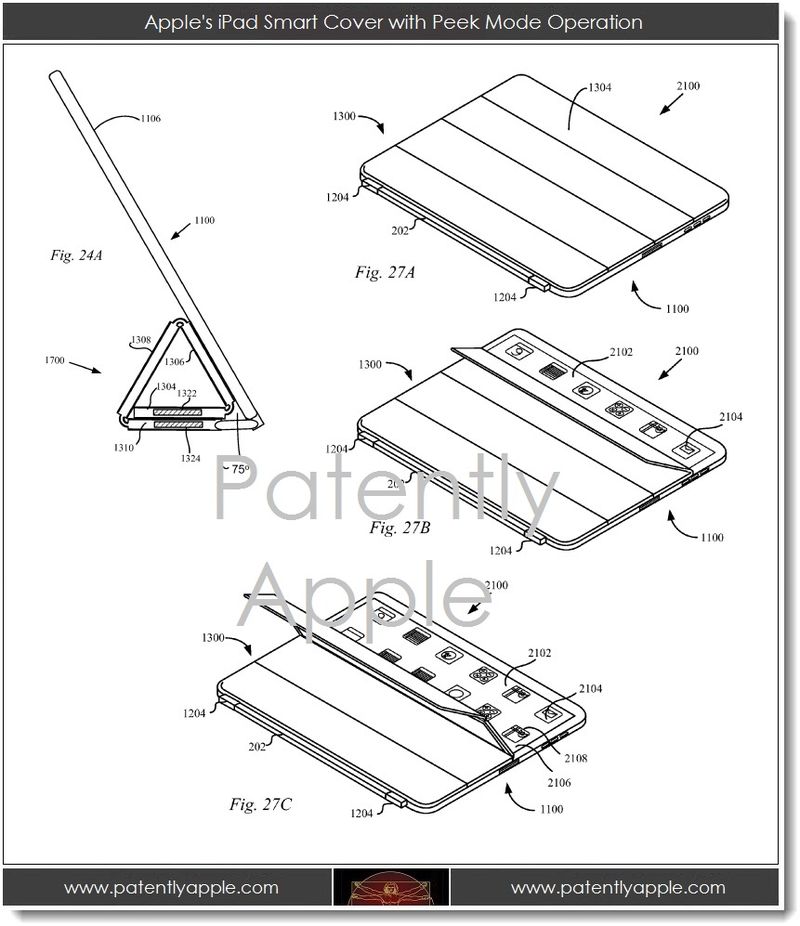 For the legally minded, here's the first Patent Claim: 1. A method performed by a tablet device having a display and a first sensor each coupled to a processor, comprising: when the tablet device is attached to a foldable cover comprising a plurality of independently foldable segments comprising a first segment at a first end of foldable cover having a magnetically attractable element and a second segment having a magnet that is detectable by the sensor at a second end of the foldable cover, the second end opposite the first end, wherein the plurality of independently foldable segments fold with respect to each other and the tablet device to form a folded state, altering an operating state of the display by the processor in accordance with the folded state, wherein in a tablet device support folded state the foldable cover forms a triangular structure by the magnetically attractable element in the first segment and the magnet in the second segment magnetically attracting each other when the first and second segments are folded one atop the other to form a first side of the triangular structure that is about equal in width to a second side of the triangular structure each of which is narrower than a third side of the triangular structure, and wherein in a first folded state where the first segment covers a corresponding portion of the display and the second segment is folded away from the display to reveal a corresponding first viewable portion of the display, the sensor detects the first folded state and sends a signal to the processor that causes the tablet device to present visual content only at the viewable portion of the display in a first peek mode.

Apple has also been granted their fourth patent for the iPad Smart Cover relating to sensor fusion. This patent describes the use of multiple sensors in combination to confirm a status of the iPad Cover in relation to the iPad.

Apple states that in one aspect of the invention, the accessory device is a protective cover having a flap incorporating a magnetic element and the first sensor is a Hall Effect (HFX) sensor. The protective cover is pivotally attached to the electronic device such that in a closed configuration the magnetic element in the flap provides a first stimulus in the form of a saturating magnetic field that is detected by the HFX sensor only when the flap is in a closed configuration with respect to the electronic device. The second sensor is any of at least an ambient light sensor, a camera, a magnetometer, a multi-touch sensitive surface, an RFID device, and a second Hall Effect sensor. See granted patent 8,289,115 for more details. 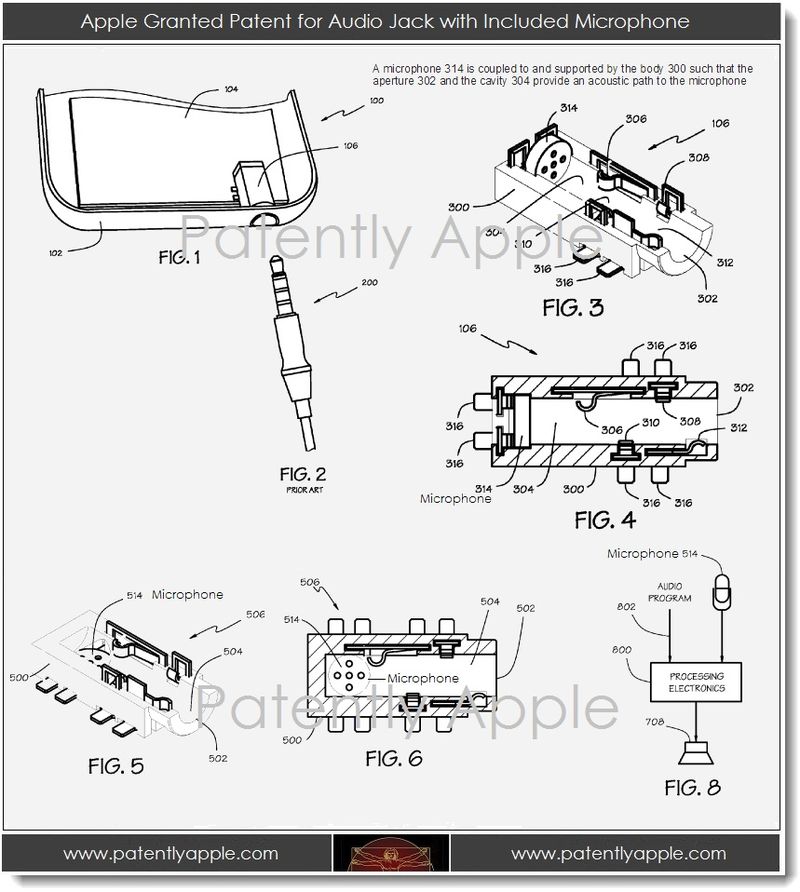 Apple's iPhone 5 feature webpage states that the new iPhone is designed with three microphones: one on the front, one on the back, and one on the bottom. The front and back mics work together to achieve beamforming — a technique that helps iPhone focus on sound from the desired location for clearer audio. This is exactly what this patent is about. However, the iPhone 5's bottom microphone is still incorporated on the exterior of the iPhone whereas this latest granted patent is about redesigning the bottom microphone into the audio Jack. Technically, this patent may represent a future design. By incorporating this idea into a future iPhone, Apple would be able to introduce a second speaker at the bottom that could translate to external audio in stereo.

And lastly, Apple has been granted two additional headset related patents today. The second patent was filed in 2008. Apple's granted patent 8,290,545 is titled "Systems and methods for accelerometer usage in a wireless headset," which is seen below as the now defunct Bluetooth wireless headset that debuted with the original iPhone. Granted patent 8,290,537 is the third headset related patent titled "Sidetone adjustment based on headset or earphone type." 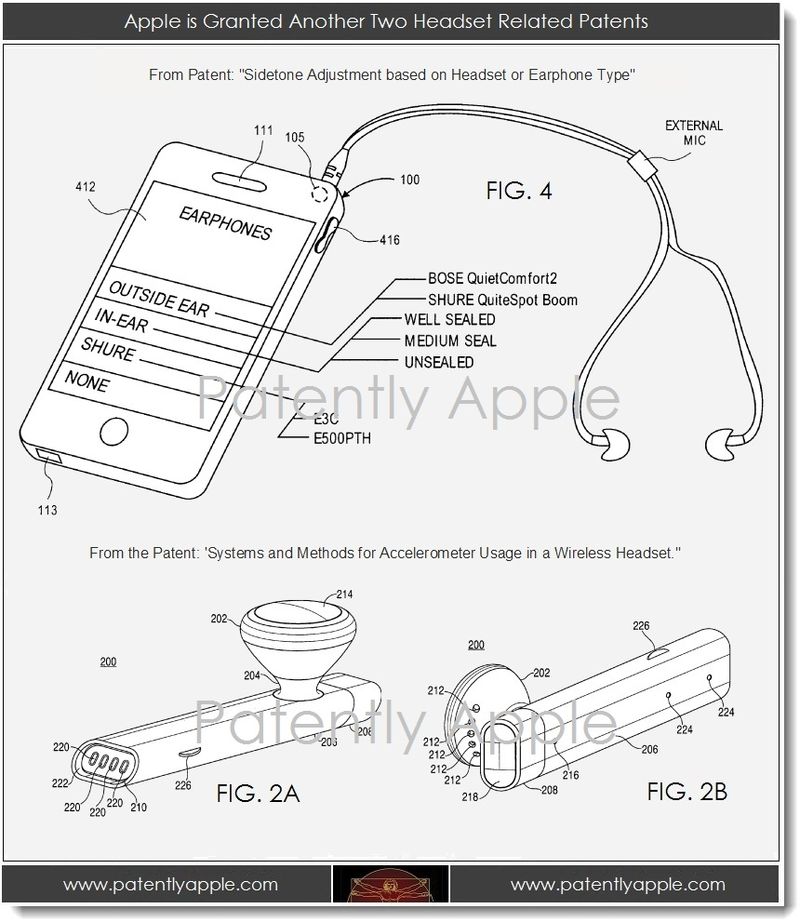