Say what? Unwired Planet Sues Apple for … Well … Everything! 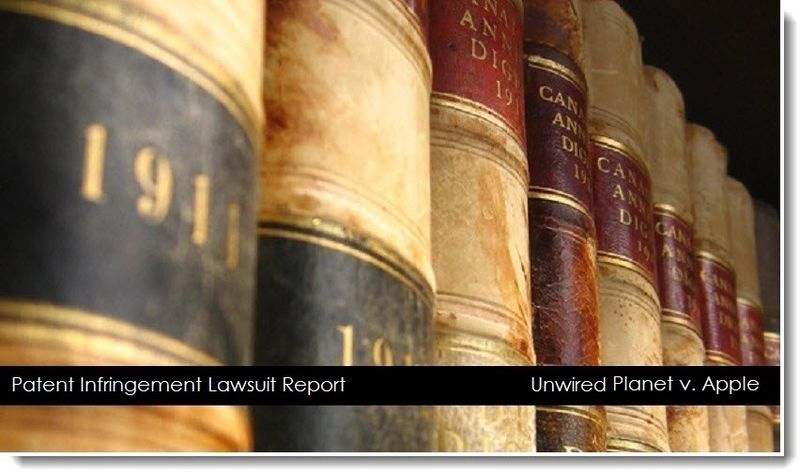 A Reno Nevada company by the name of Unwired Planet Inc. (NASDAQ: UPIP), formerly Openwave Systems, appears to be gambling on a patent infringement suit against Apple. The company is claiming that most everything Apple sells in the way of products and services are in direct violation of ten specific patents that they own. According to information on their website, Unwired Planet filed a complaint in 2011 with the International Trade Commission (ITC) in Washington, DC, requesting that the ITC bar Apple Inc. from importing into the United States their smartphones and tablet computers that they believed infringed on Unwired Planet patents. Unwired Planet also simultaneously filed a similar complaint in federal district court in Delaware. Unwired Planet is asking the court to award them "reasonable royalties" and much more if Apple is found guilty.

Unwired Planet was founded with the vision of bringing the "internet-in-your-pocket" to the world. But, at the time of the inventions at issue here, most technology firms were not interested. While Unwired Planet saw the need for applications and environments that could leverage emerging devices and increasing bandwidth, other technology firms were too focused on their old way of doing business. As a result, Unwired Planet was the first to put an internet browser into a phone, signing a deal with AT&T in 1996 through its predecessor company, Libris.

In 1997, Unwired Planet began pushing for a worldwide standard for mobile internet access by teaming up with some of the leading global handset manufacturers to found the WAP Forum. The purpose of the WAP Forum was to develop a standard worldwide wireless internet technology so that content providers could use existing content when creating mobile services. The WAP Forum was a resounding success, and by 1999, over 150 wireless companies were integrating the WAP standard into their products, covering approximately 95% of the world market for cellular handsets. By 2001 the WAP Forum had grown to more than 500 members.

Unwired Planet issued an initial public stock offering in 1999, changing its name to Phone.com to reflect the company's emphasis on providing internet to wireless devices through its browser software and developer tools. These products included Up.Mail which delivered email to wireless telephones), Up.Organizer (a personal information management application), Up.Web (which allowed subscribers to manage and configure the other programs from their PCs), Up.Browser (a wireless phone browser), and Up.Smart (a PDA software application for wireless phones), among others. By August 1999, 31 network operators across the globe had licensed Phone.com's software. hone.com flourished, providing its access software to companies around the globe. USA Today called Phone.com "the linchpin for the wireless internet" in a July 2000 article, stating that Phone.com's software touched approximately 80 percent of Web-enabled phones at the time. Bloomberg named Alain Rossmann one of the founders of Unwired Planet, among the "Top Entrepreneurs of 1999."

In 2000, Phone.com merged with Software.com to form Openwave Systems Inc., the predecessor to the current-day Unwired Planet, in a $6.4 billion merger. Openwave continued to grow and innovate. By mid-2001, about 97 percent of internet-ready mobile phones in the United States and approximately 75 percent overseas used an Openwave browser. By July 2001 Openwave had increased in size to approximately 2,200 employees worldwide, and the company earned revenues of over $465 million for fiscal year 2001.

Through its innovation and technological leadership, Openwave was awarded a sizeable portfolio of over 200 patents. Many of these patents disclose and protect the foundational aspects of today's most widely-used mobile technologies, such as mobile internet, location-based services, and e-commerce applications.

Unfortunately, merely having patents did not protect Openwave from infringing competition. As Openwave's revenues and market share fell, it was forced to downsize its own employees. With the onslaught of infringing competition having forced Openwave out of the market it created, in April 2012 Openwave sold its product businesses, but retained the patents it had been awarded. After selling off its product businesses, Openwave changed its name back to Unwired Planet, Inc., Unwired Planet Inc. is the parent of, and the predecessor in interest of, Plaintiff Unwired Planet, LLC. Unwired Planet retained its patents, representing almost two decades of investment, allowing the company to focus its efforts on licensing its fundamental patent portfolio to the companies whose infringement put it out of the software and service businesses.

Patent 6,317,594 ("the '594 Patent"), entitled "System and Method for Providing Data to a Wireless Device upon Detection of Activity of the Device on a Wireless Network." 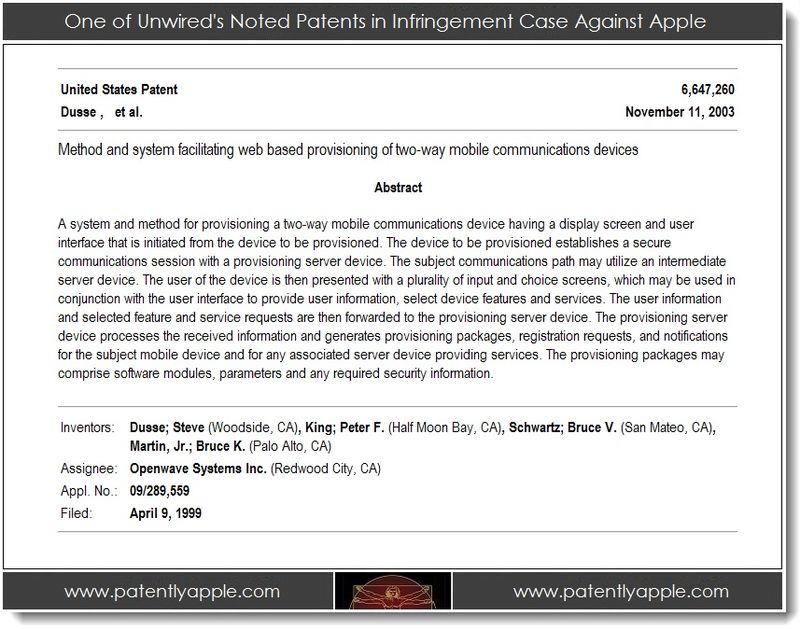 Patent 6,813,491 ("the '491 Patent"), entitled "Method and Apparatus for Adapting Settings of Wireless Communication Devices in Accordance with User Proximity."

Patent 7,299,033 ("the '033 Patent"), entitled "Domain based management of distribution of digital content from multiple suppliers to multiple wireless services subscribers." 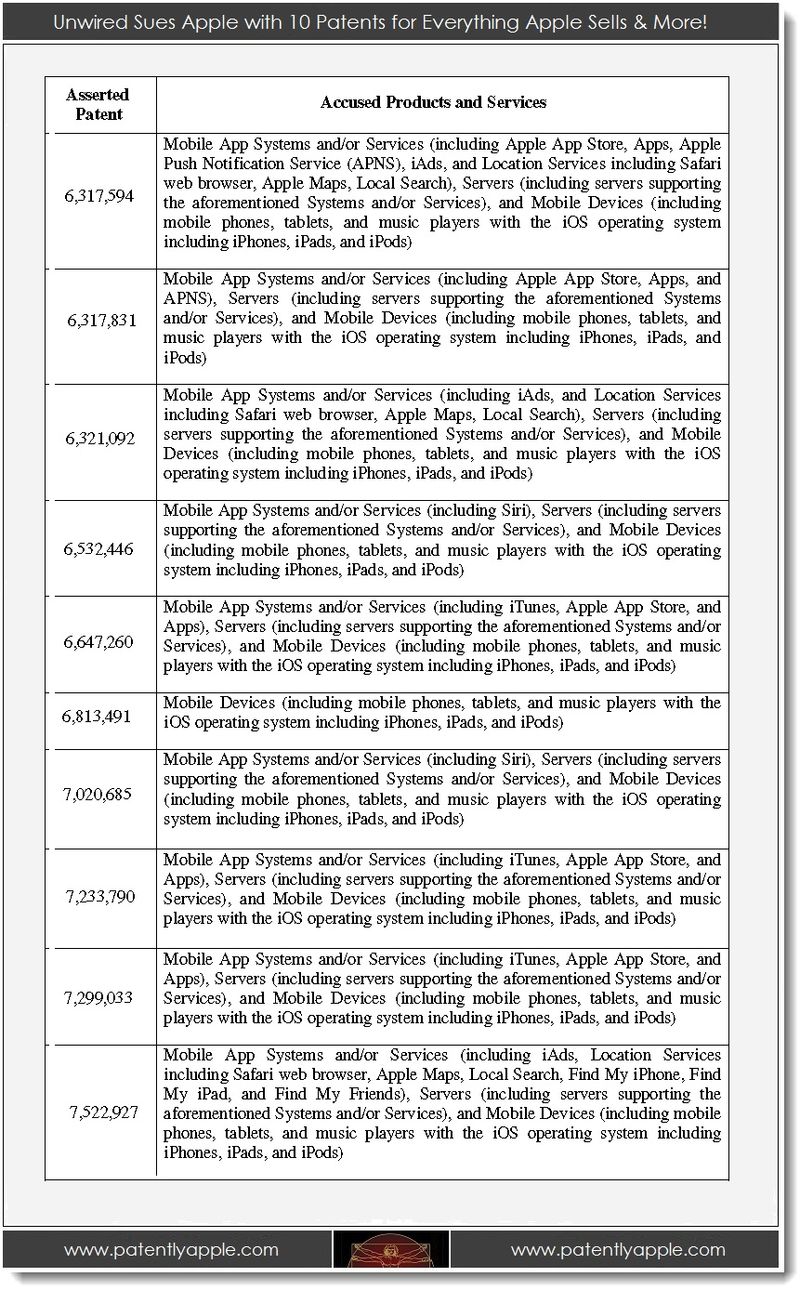 If Apple is found guilty of patent infringement, Unwired is seeking the court to grant them a "reasonable royalty" and to triple the fines in this case due to "willful" infringement.

The case was filed in the United States District Court in Reno Nevada. The presiding Judge in this case is noted as being Chief Judge Robert C. Jones, referred to Magistrate Judge Valerie P. Cooke.