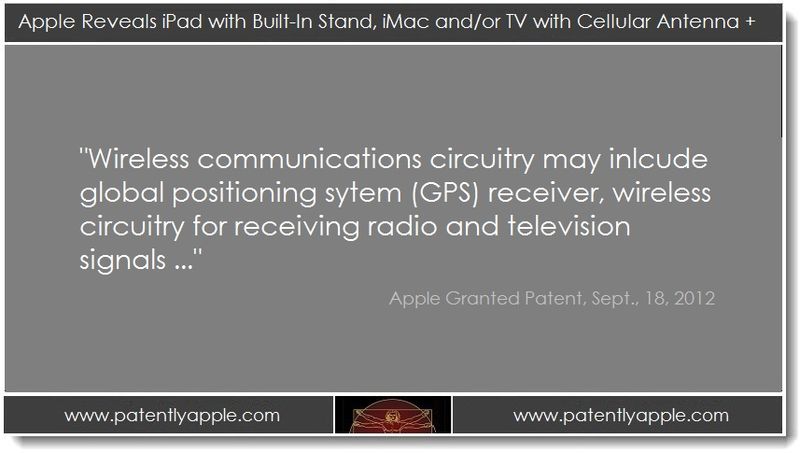 Wow, out of nowhere newly granted patents for Apple reveal MacBooks, an iMac and possibly a TV having cellular and television circuitry built in. If that wasn't enough, Apple reveals a possible future iPad with a built-in stand that incorporates a cellular antenna. Why say more – take a look for yourself.

Electronic devices such as portable computers and handheld electronic devices are becoming increasingly popular. Examples of portable devices include handheld computers, cellular telephones, media players, and hybrid devices that include the functionality of multiple devices of this type.

Apple's invention sets out to provide improved antennas for portable electronic devices that have conductive housings. 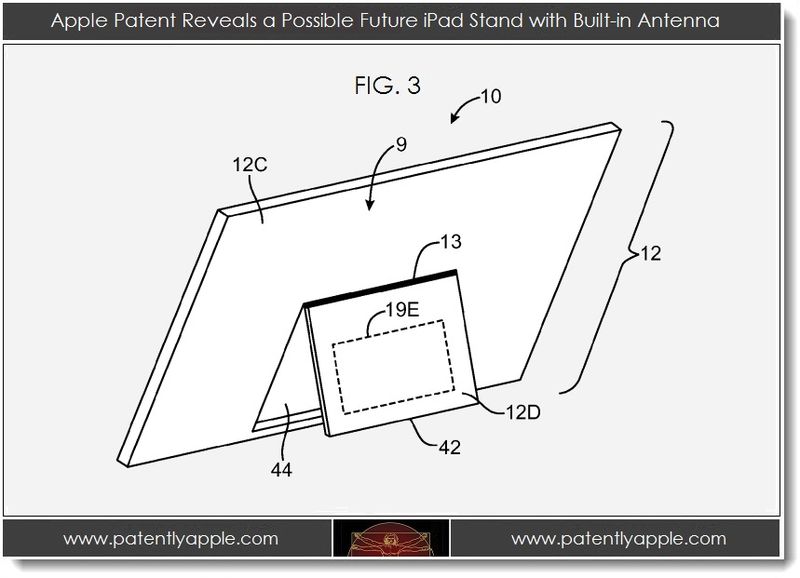 Specifically, Apple's patent FIG. 3 shows a tablet computer such as the iPad having a housing that may have a stand built-in. The Stand is to hold the iPad in an upright position when pulled out from the back of the iPad. Slot antennas may be formed in the stand such as in dashed region 19E of FIG. 3. 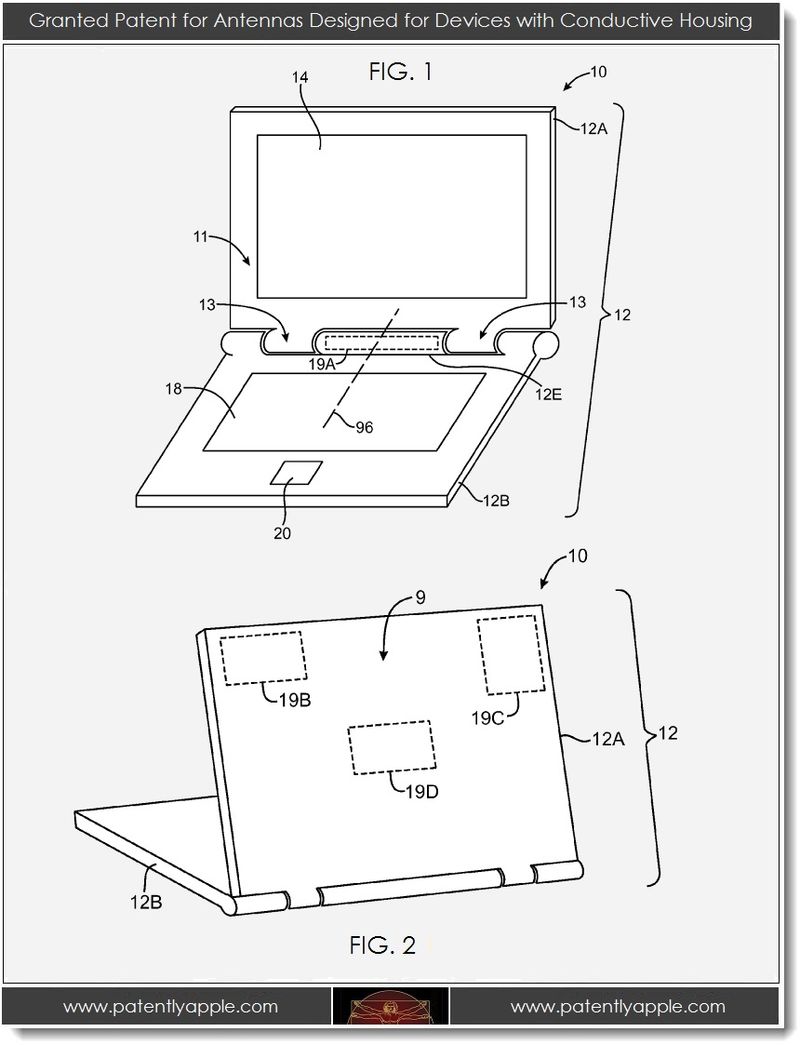 Apple credits Kough; Douglas B. (San Jose, CA), Springer; Gregory A. (Sunnyvale, CA), Chiang; Bing (Melbourne, FL), Ayala Vazquez; Enrique (Watsonville, CA), and Hao Xu as the inventors of their '675 patent which was originally filed in Q2 2009 and published today by the US Patent and Trademark Office.

Future iMac and Television Display May Have Built-In Cellular Antennas 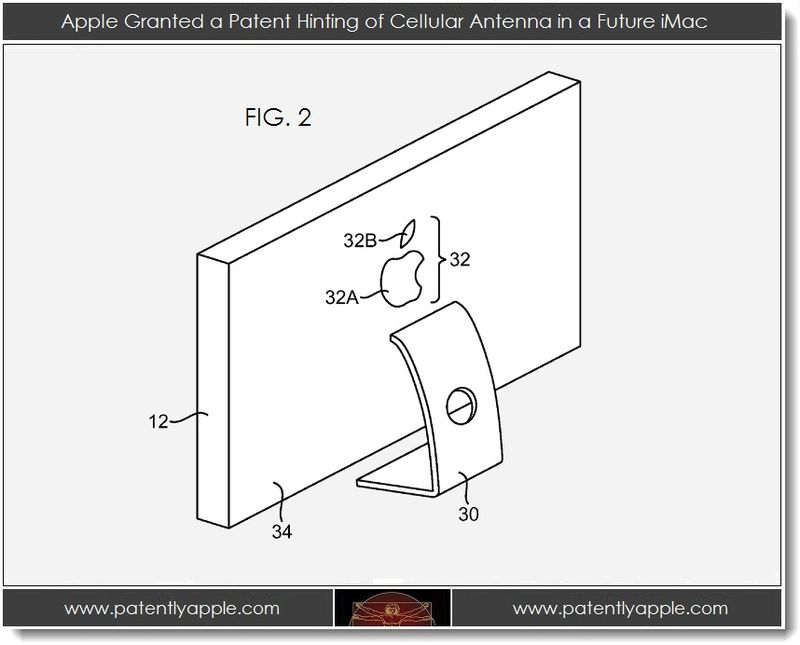 The last granted patent relating to antennas, likely supports Apple's iPhone 4 if not iPhone 5. The patent is title "Bezel gap antennas." You could learn more about it under granted patent 8,270,914

Two last patents of the day relate to "Optimized selection of memory chips in multi-chips memory devices" under number 8,270,246 (see graphic below) and an iPhone related patent titled "Method and system for prolonging emergency calls" under 8,270,935 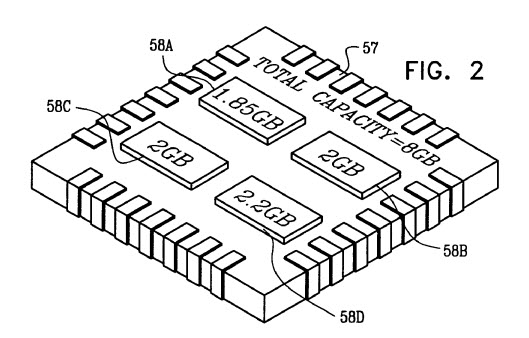 This would tread extremely close to an anti-trust suit if I ever saw one. They would effectively be locking out the existing cellular telephone companies out of their ability to be profitable because they rely quite heavily on the customers with smartphones made by Apple and/or running the Android OS.

Apple and Google would pretty much be taking all those customers away because it would no longer make sense for the customers to use AT&T, Verizon, Sprint, T-Mobile, etc when they can just bundle their carrier service with the phone manufacturer itself. It's the same concept as to why "Ma Bell" was broken up under anti-trust laws and not allowed to provide long distance service itself for a very long time.

Not sure about profit since Apple/Google still needs to pay for all the operational costs. Control is for sure and it makes sense for Google to buy Verizon instead of Motorola. I really don't think Apple will go that way since I don't think current Apple executives are risk taker. I wouldn't say so if Steve Jobs were still the CEO since he really was a risk taker (e.g. Apple Retail, iPod and iPhone).

While I know it would affect sales in the short term I think its becoming a better and better idea for companies like Apple and Google to create their own wireless networks. They are giving up substantial profits and control over to these cellular network companies. And as the patent shows us they are looking to expand cellular capabilities into TV's and computers and probably eventually iPods they would be releasing even more control of their products to the wireless carriers.