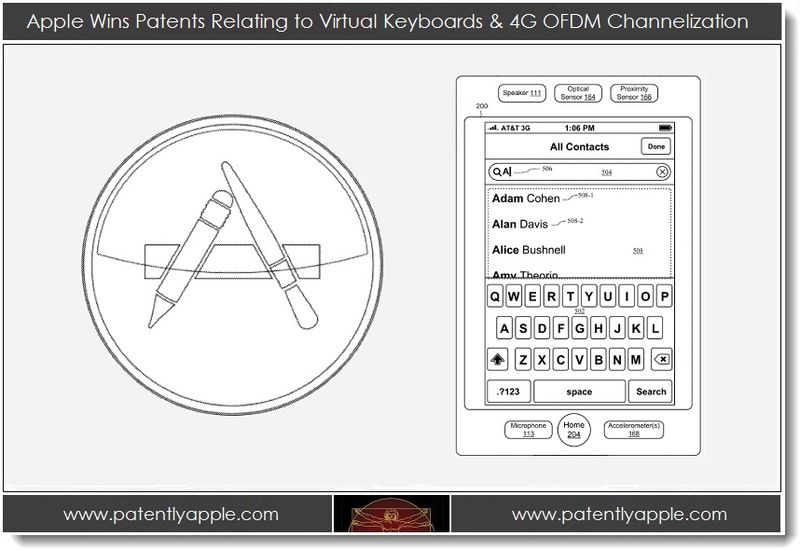 Apple credits Imran Chaudhri and Bas Ording as the inventors of granted patent 8,274,536 which was originally filed in Q3 2009 and published today by the US Patent and Trademark Office.

As we pointed out in a September report, Apple has amassed 434 LTE patents to fend off potential lawsuits from competitors like Samsung. Today, Apple has received a Granted Patent for one of these patents which relate to channelization systems and methods for use in OFDM (orthogonal frequency division multiplexing) systems, such as OFDM wireless networks. Apple's patent FIG. 38 is a block diagram of a logical breakdown of an example OFDM transmitter architecture that might be used to implement some embodiments of the present invention; patent FIG. 24 is one diagram (of 3) illustrating diversity sub-channelization in which all of the sub-carriers are employed for diversity sub-channelization notwithstanding whether or not sub-band channels have been assigned.

Apple's granted patent 8,274,880 was originally filed in Q4 2006 and published today by the US Patent and Trademark Office. The inventors of this patent are noted as being from Canada which likely suggests that this patent may have originated with Nortel.

Knowing that Apple has amassed more than 434 LTE related patents, Patently Apple has now opened a new sidebar category archive titled OFDM, 4G & LTE to cover these patents as they're published by the US Patent and Trademark Office over time.

Over and above the granted patents that were specifically reported on today, we present you with links to six additional granted patents in our first patent round-up as follows:

Facilitating caching in an image-processing system

Methods and apparatus for visualizing a media library