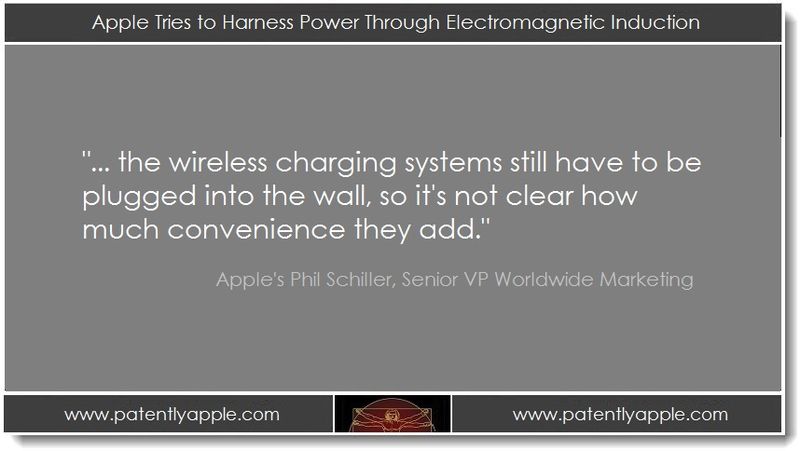 On September 20, 2012, the US Patent & Trademark Office published a series of 17 patent applications from Apple. In this report we briefly cover Apple's latest efforts at harnessing power through electromagnetic induction. Apple has something up their sleeve for better powering future devices longer. While I'm not sure that today's invention is the magic bullet, Apple's Phil Schiller thinks there's a better solution out there. He just doesn't want to spill the beans just yet … maybe. Time will tell.

Last Wednesday Phil Schiller noted that "As for wireless charging, the wireless charging systems still have to be plugged into the wall, so it's not clear how much convenience they add. The widely-adopted USB cord, meanwhile, can charge in wall outlets, computers and even on airplanes, he told CNET.

"Having to create another device you have to plug into the wall is actually, for most situations, more complicated," Schiller said.

Hmm – So plugging in 2 iPhones, an iPad and an iPod touch at one time using 4 USB cables plugged into a home iMac is considered to be better than one wireless charging device charging all of the noted devices at one time without cables. The logic escapes me. So let's just chalk it up to Apple just not having a ground breaking solution just yet regarding wireless charging and until they do, we'll just keep plugging-unplugging and re-plugging our devices via USB while other device makers simply give their users a viable wireless charging option.

Oh and about that breakthrough solution, Apple is working on a few and one of them was published again today under patent application 20120235510 titled "Harnessing Power through Electromagnetic Induction Utilizing Printed Coils." I say again because it basically mirrors their March 2011 patent application by the same name.

This is definitely a conceptual idea and one that we're unlikely to see come to market on iDevices for many, many years – if ever. But that doesn't mean that Apple isn't working on a variant that could be a gamer changer.

Just as the auto industry is racing to find the perfect electric engine, the tech sector is in a similar race to find a better battery or a new energy source to extend the life of portable devices. Being that Apple is the leading mobile devices company in the world today, they know all too well how important a breakthrough in this field may be. In today's patent we see that Apple is exploring ways of building a miniature electromagnetic induction system right into future portable devices as a means of extending battery life.

This could be huge if Apple could ever pull it off. Of course the jury is still out as to whether Apple will ever be the one to crack this needed discovery. But we see Apple trying and you can never count the Crazy Ones of Cupertino out of any race that they set their minds to. 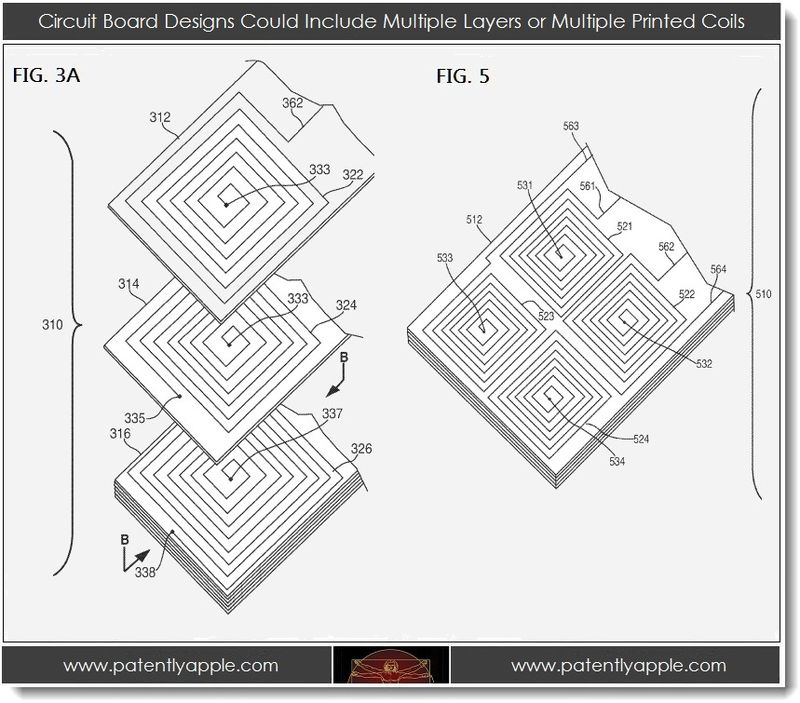 Maybe it was just me, but I found Schiller's response to wireless charging to be a little defensive. I couldn't tell if it's just Apple being behind the curve on this front or whether he was teeing it up for a future announcement. Which do you think it was? – Schiller being defensive or Apple having a ground breaking solution in the pipeline. Let us know in our comments area.

The main downside, I think, to inductive charging, aside from extra bulk in the phone & lack of charging pads on the go is that you can't easily use the phone when its charging as it has to remain lying on the pad to get a good current. When charging pads are ubiquitous it would make sense, but I'd still want a wired option as well.

Further, an induction charger requires the iPhone and iPad become thicker to accommodate the internal charger or for the devices to have an external case to contain the charger.

With Apple's solution:
1. Some wall electrical sockets - such as from OWComptuing - already have USB charging ports. Thus you only need a slim portable cord to charge your device.

Sorry but that is a lot to carry around. It is a non-portable solution since it is so heavy. And you can't even sync to the Mac with it.

Apple's solution is better:
1. 4 highly portable cords
2. Either connect the cords to the Mac or use 4 small power blocks that you connect to the wall.

With Apple's solution, you can synchronize to the Mac AND charge your device at the same time. And it is a highly portable solution.

If the patent examiner has even a shred of integrity this patent application is DOA.