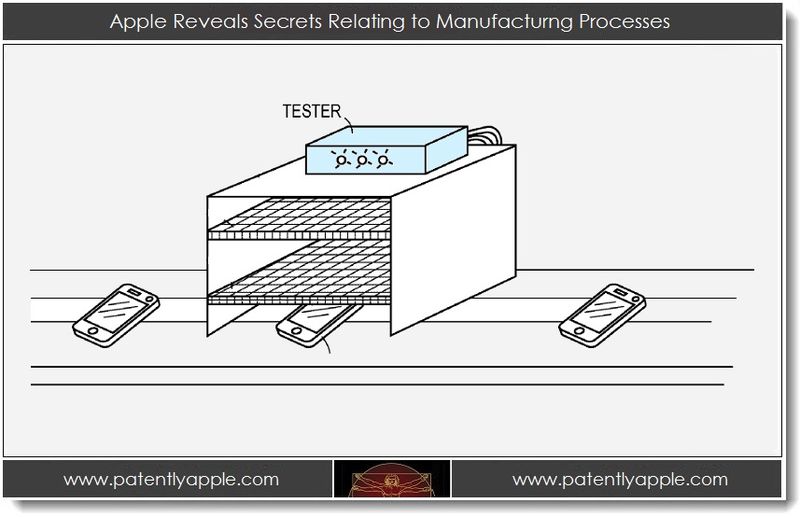 On September 20, 2012, the US Patent & Trademark Office published a series of 17 patent applications from Apple. In this report we cover three patent applications relating to various manufacturing processes related to iDevices. In our recent report titled Apple's Leadership and Magic Shine Through we presented a segment covering Sir Jony Ive on the iPhone 5 and the many manufacturing processes associated with it. Jony takes such pride in his work that it shines through in every product. And so it's always fascinating to see new processes being revealed in patent filings. If you happen to appreciate the making of products, like I do, then I think that you'll enjoy this report and the links to each patent. In other IP news, Apple has been granted a registered trademark for VoicePass.

Apple's patent filing begins with some background. Apple states that a proximity sensor is a sensor that is able to detect the presence of nearby objects without any physical contact. One particular type of proximity sensor emits a beam of electromagnetic radiation in the infrared spectrum, and detects changes in the field or return signal. The object being sensed may be referred to as the proximity sensor's target. To test such a sensor, a target is selected that has sufficient reflection characteristics in the infrared spectrum used by the sensor. The target is then placed at different distances from the sensor, while measuring the output of the sensor. As the target is moved farther away, the output of the sensor drops. Typically, the sensor is tested at several different target distances, and if its output falls outside an expected range for each target distance, then the sensor may be deemed a failing unit.

While the proximity sensor has long had several applications, its relatively recent use in personal mobile communications devices such as cellular phones and smart phones that have a touch sensitive display screen presents a particularly difficult challenge for its high volume manufacture testing.

Smart phones such as the iPhone device by Apple Inc. use a proximity sensor to detect when the user has moved the device to their ear during a call, and on that basis may decide to disable any input from a touch screen to avoid inadvertent touch commands being entered due to contact with the user's cheek. Quality control may call for each specimen of such a smart phone device to be tested prior to sale. Since a relatively large number of such specimens may need to be released to end users over a short time interval, for example every day, a more efficient test methodology for testing the proximity sensor is needed.

Output data from the sensor is collected while the sensor is operating (and the infrared absorption characteristics of the device are changing). The collected output data is compared to expected data to determine whether or not the proximity sensor has passed a target object distance test. As an example, the EMIRT device may include an array of liquid crystal elements that are controlled by the tester to achieve variable attenuation of the infrared radiation that is passing through the array. Such a system may be more cost effective and may be faster than a conventional proximity sensor test system in which the test target needs to be automatically moved to different distances. 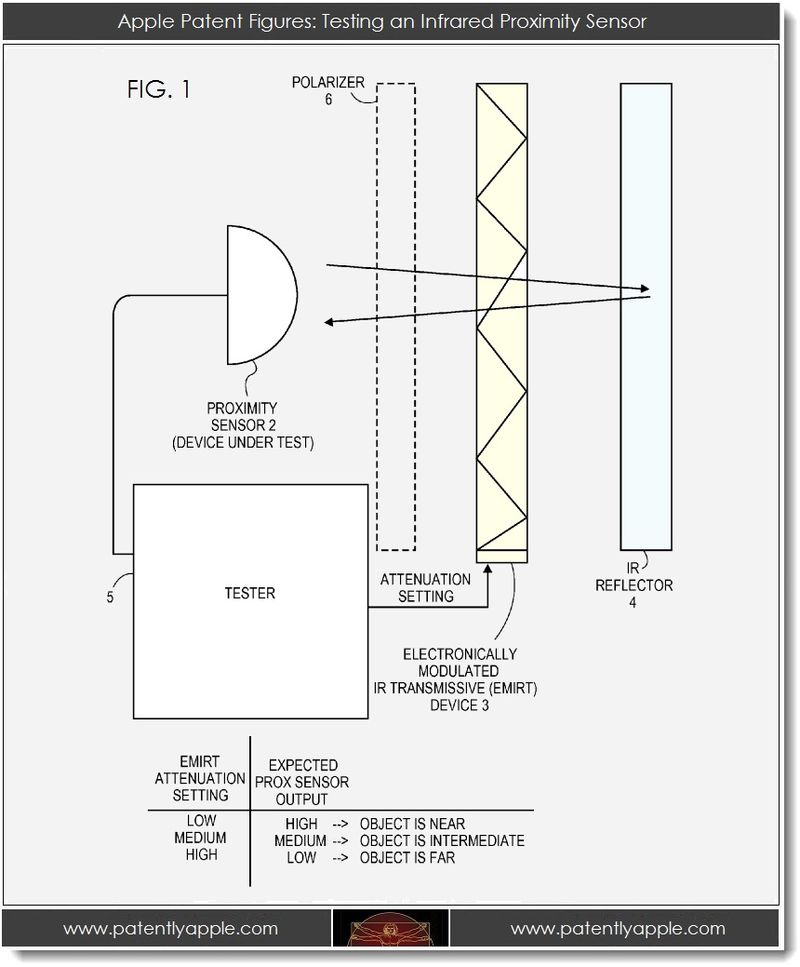 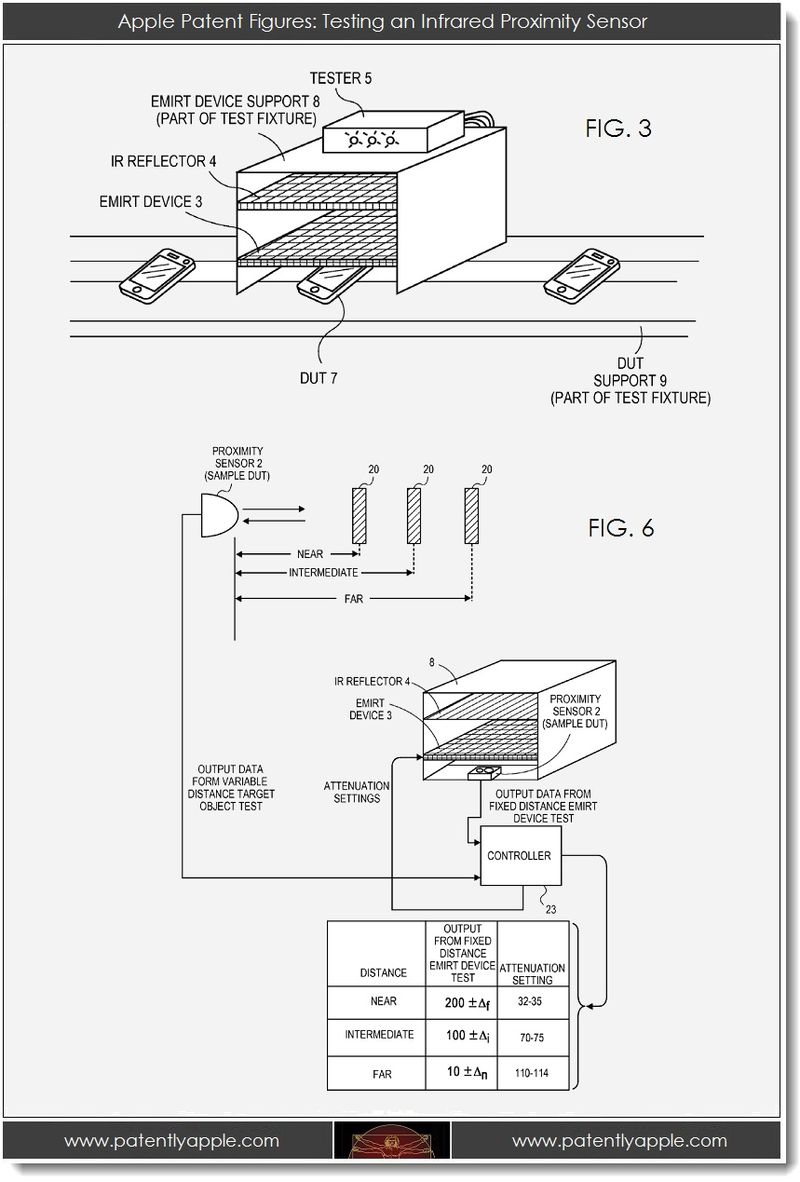 Magnets can be used as an attachment mechanism for various objects. A common example is a refrigerator magnet that can be used to attach objects, such as paper, to a refrigerator. Magnets can also be used as an attachment means in place of mechanical fasteners in electronic devices, such as portable computing devices. Recent advances in portable computing includes the introduction of hand held electronic devices and computing platforms along the lines of the iPad tablet manufactured by Apple Inc. of Cupertino, Calif.

Typically, a manufacturing process for producing magnets begins with melting Rare Earth elements, such as, for example, neodymium, iron, and boron, to form an alloy. The melted neodymium iron boron (NdFeB) alloy then is then cooled, forming ingots of the alloy. The alloy ingots are then pulverized into small magnetic particles that are about several microns in size. The magnetic particles are then placed in a jig to press them into shape while a magnetic field is applied. 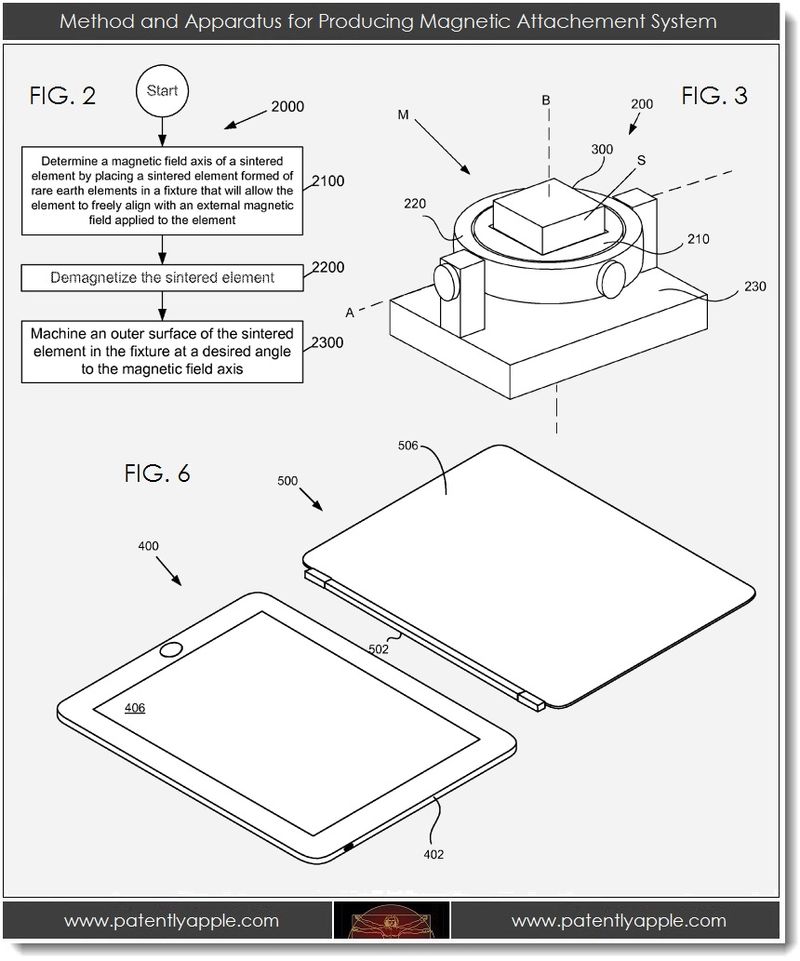 Before the pressed magnet is released from the jig, a demagnetizing pulse is applied to demagnetize the magnet. The pressed particles are then heat treated in a sintering furnace to give the magnet its magnetic properties and to increase its density. The sintering process causes the pressed magnet to no longer have a flat or smooth outer surface and to shrink as the particles fuse together. The shrinking that occurs during the sintering process results in an uneven outer surface that can be unpredictable and often the shape of the magnet will not be to desired dimensions. Because the outer surface is unpredictable, it is also difficult to predict variations of the outer surface of the block relative to the magnetic field axis.

In order to achieve the required measurements of the magnets, the outer surface is then machined so that the surface is flat and to the desired dimensions. It should be noted that, in this conventional process, the machining does not reference the magnetic field axis. Instead, the outer surface of the sintered magnet is referenced. The machining includes grinding the sintered magnet using cutting tools or abrasives. Diamond cutting tools or abrasives can be used for the grinding because the magnet is very hard. Because magnetic material is ground during the machining process, the magnets are made larger during the pressing process so that some of the material can be machined away to achieve the desired dimensions. Alternatively, the magnet can be sliced to achieve the desired dimensions and a flat outer surface. A large block can be further sliced into many blocks of the desired size. The first cut is typically used as a reference for the rest of the machining of the block. Unfortunately, both the machining and slicing processes can result in a large amount of wasted magnetic material that is cut or ground away.

To know more about Apple's manufacturing process as it relates to the iPad Cover magnets, see Apple's patent application 20120233835 which was filed in Q3 2011 by Cesare Tolentino. Cesare Tolentino interestingly appears to be an independent engineer with many magnet related patents to his credit.

Apple's patent application 20120234096 which was published today by the US Patent Office relates to a technique for checking or verifying the acoustic capability of a test fixture that is to be used for acoustics testing of a portable media device. Apple was just granted a patent for this invention in June. 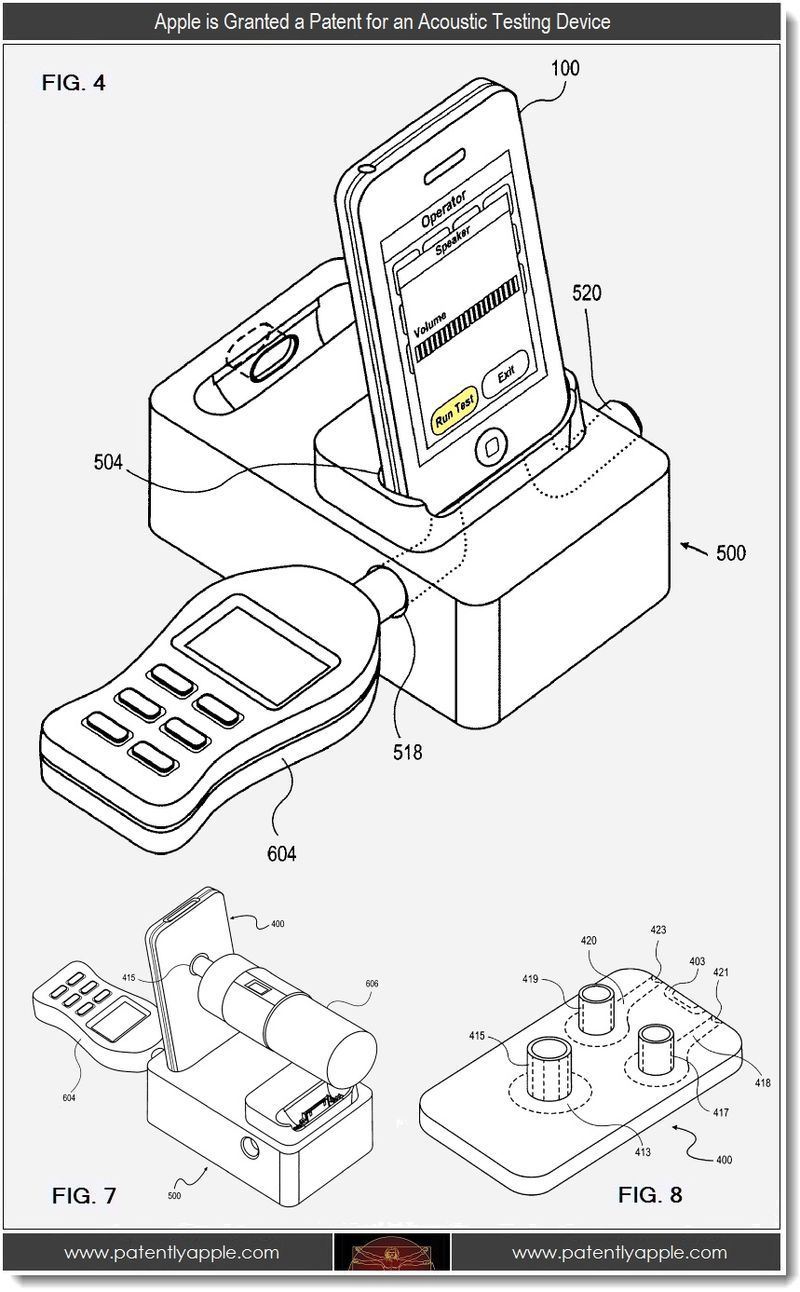 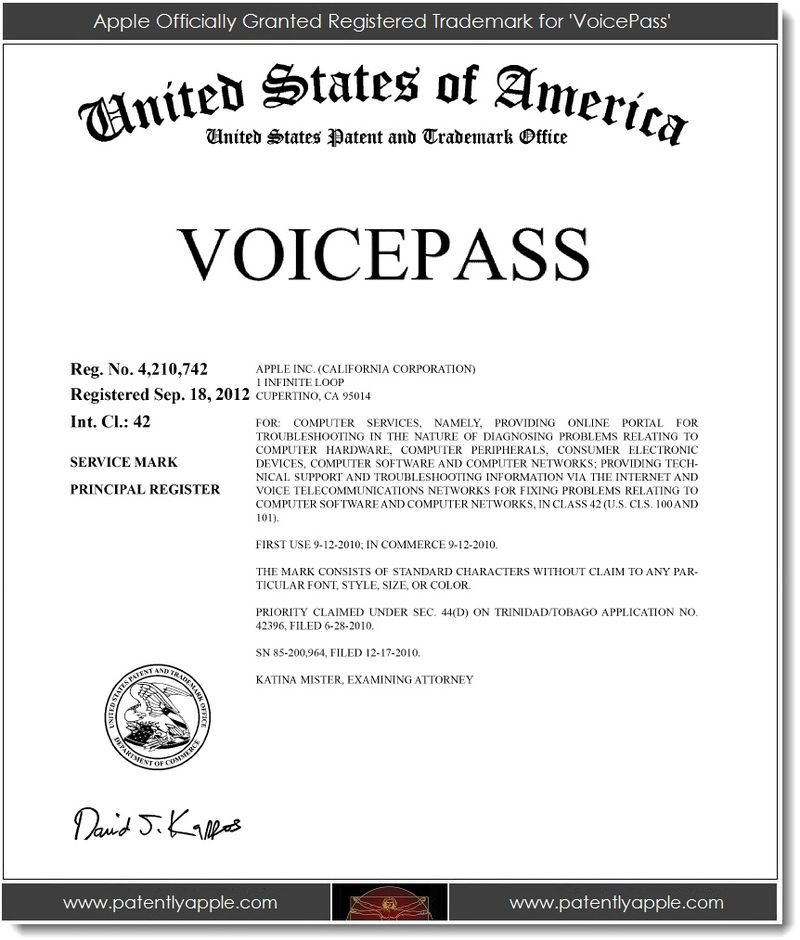 Apple filed for the VoicePass trademark on December 17, 2010 and as shown above it has been registered by the US Patent and Trademark Office.

Apple was also granted a registered trademark 4209614 for iChat, though it's a little too late to matter – unless they revive the trademark for something else in the future, thought I highly doubt it.