Apple is to Request 3 Billion in Damages 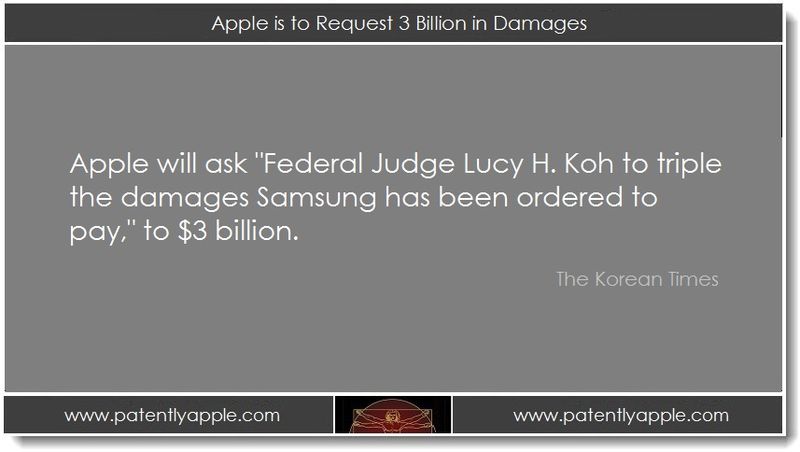 The Korean Times is reporting this morning that their legal executive source has confirmed that Apple will ask "Federal Judge Lucy H. Koh to triple the damages Samsung has been ordered to pay," to $3 billion for willfully copying the iPhone and iPad on Friday, September 21. Top Samsung lawyer John Quinn has reportedly said that the company will be asking Koh to toss the jury findings out. If she doesn't, the lawyer said he will appeal.

Samsung earlier confirmed that it will move immediately to file post-verdict motions to overturn the controversial verdict.

Legal officials told The Korean Times that Apple's request is expected to further the controversy as, if accepted by the judge, is seen as the firm flexing its muscles toward other Google Android communities that include LG Electronics and Taiwan's HTC, said legal officials.

The Korean Times is known to be a controversial source as we pointed out in our September 10 report titled "Korean PR War Spotlights Apple as Patent Troll." In our report we clearly made the case that The Korean Times had slanted the context of a study done by the Boston University School of Law to suit their report.

In a new report posted yesterday titled "Samsung topples Apple in brand image," The Korean Times reported that a recent poll by market research agency YouGov that compared public perception of the two companies, the Suwon-based electronics giant's "buzz score" has actually surpassed that of its American competitor two weeks after the verdict.

YouGov asked 5,000 people in the United States, dividing them into two groups of those aged between 18 to 34 and adults who considered themselves "early technology adopters": "If you heard anything about the brand in the last two weeks, through advertising, news or by word of mouth was it positive or negative?" A score of 100 indicates a completely positive view and zero completely negative. As of Sept. 6, reports The Koran Times, Samsung scored 46 over Apple's 24, in the group for those between 18 and 34."

The Korean Times packs their report with personal testimonies that are meaningless and an online string confirms that YouGov pays survey participants. Can their findings be skewed by fanatical Android fans? Yes, very likely as only YouGov members can participate in these surveys.

When it comes to supporting their home team Samsung, The Korean Times appears to be willing to twist reality to get the results they seek. Considering that Samsung's stock got hammered with the ruling going Apple's way last month, what better way to prop Samsung back up in the public than to release the findings of a survey stating that Samsung has now rebounded, strongly The thing is that most people in Korea and elsewhere around the world have never even heard of YouGov before. But hey, if the results are favorable, your hometown fans will eat it up, whether the results have any meaning or not. It's just what they want to hear. .

At the end of the day, whether sources for The Korean Times have gotten it right about Apple's intentions of requesting a tripling of the damages this coming Friday is unknown at this time. However, it's not unlikely that this could occur in-part being that the jury did in fact find that Samsung's infringement was willful in certain areas. That could in fact lead to tripling of damages – without requiring the assistance of a shadowy "source."

Samsung depends upon the ignorance of jurors everywhere and won't rest 'til they find one since a stupid jury is their only hope.