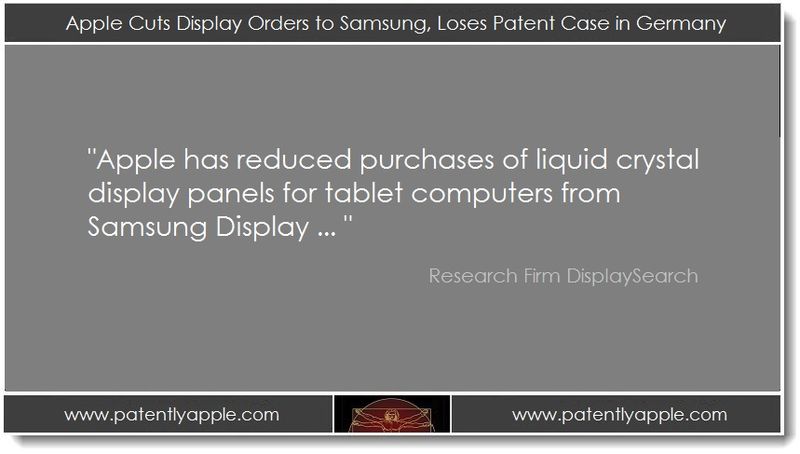 The Korean Times is reporting this morning that "Apple has reduced purchases of liquid crystal display (LCD) panels for tablet computers from Samsung Display amid the deepening patent disputes, said a leading market research firm, Friday. Market experts said that the move is aimed at minimizing its reliance on Samsung parts."

An analysis by DisplaySearch showed Apple bought 683,000 display sheets for use in its 9.7-inch iPad tablet from Samsung Display in August this year ― a cut by nearly 50 percent from a month earlier. 9.7-inch displays are only being used in Apple iPads.

In May, Samsung Display shipped 2.88 million sheets to Apple, which was a monthly record. But the shipments were down to 1.22 million in July from 2.5 million that Samsung sold to Apple in June, according to the research firm.

The analyst said the Apple iPhone 5 is using LG screens, while Apple contracted with LG to buy big chunks of displays for use in its next iPad ― tentatively named the iPad 3 ― and mini iPad.

Today, the district court in Mannheim, one of the three German courts the two rivals have been facing off in, ruled Samsung didn't infringe the iPhone maker's patent on multi-touch flags.

Samsung in a statements said that "For decades, we have heavily invested in pioneering the development of technological and design innovations in the mobile industry, which have been constantly reflected in our products."

As the iPhone 5 debuts today in many markets around the world, Samsung releases a new Galaxy SIII v. iPhone 5 ad.