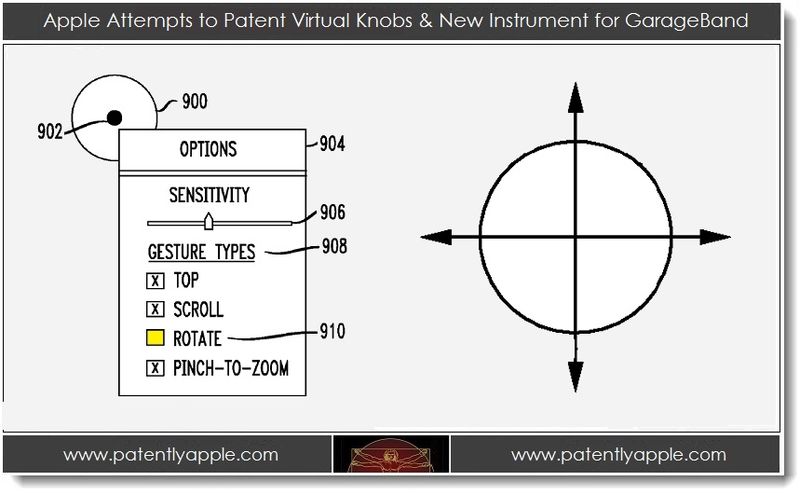 On September 6, 2012, the US Patent & Trademark Office published a patent application from Apple that reveals new virtual controls that are in the works along with a new virtual instrument for a future version of GarageBand.

The first patent application in this report relates to user interfaces and more specifically to making touch-based interfaces more user friendly. In particular, the invention relates to a system configured to practice a user interface element such as a virtual on-screen knob. Yet in the bigger picture, the input could be a touch, a tap, a swipe, a multi-finger gesture, a flick, a drag, and/or a press-and-hold, for example. 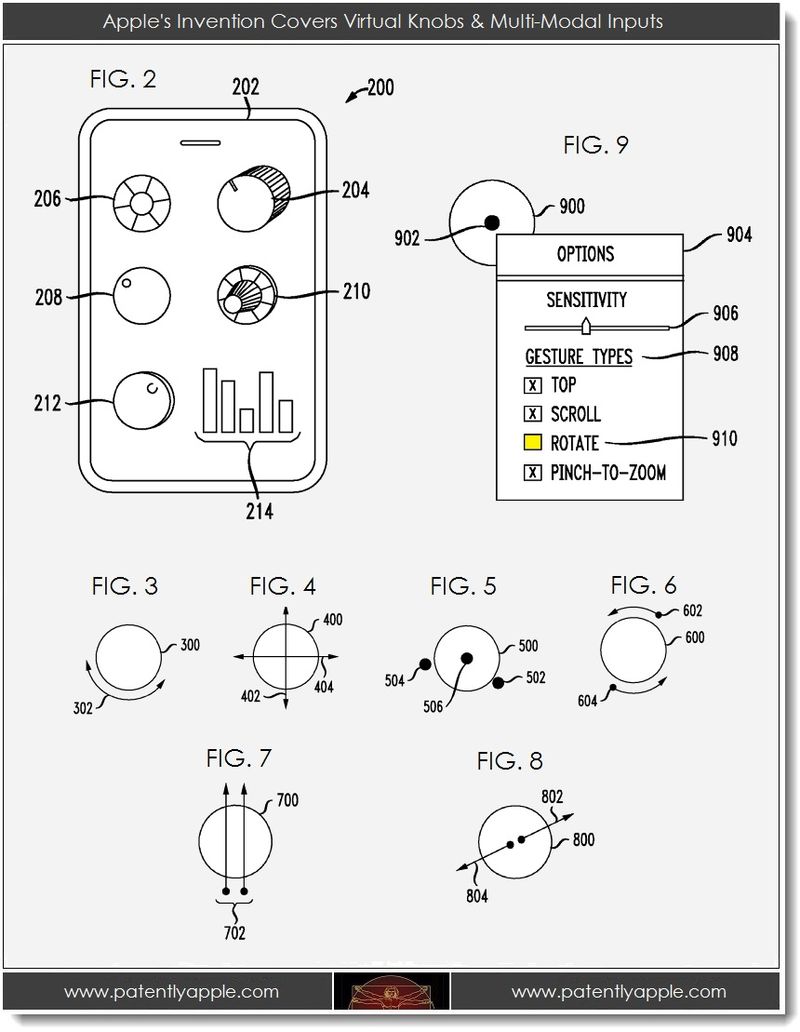 Apple's patent FIG. 2 illustrates an example mobile device 200, such as a smartphone, tablet, or computer, with a touch-screen interface 202 and exemplary virtual knobs 204, 206, 208, 210, 212 on the touch-screen interface. The knobs could be images, three-dimensional representations or approximations of real knobs, simple geometric shapes, and/or any other graphical representation.

Apple's patent application was originally filed in Q1 2011 by inventors Gerhard Lengeling and Marko Junghanns and published today by the US Patent and Trademark Office.

A Tiny Peek into a Future Version of GarageBand

In place of or in conjunction with the piano keyboard, the application (GarageBand) could provide any other on-screen input, such as an on-screen guitar or a virtual on-screen Theremin.

According to Apple, two devices could communicate with each in a wired or wireless manner, such as via a USB cable, near-field communications, Bluetooth, ZigBee, 802.11x WiFi, or other IP-based communication mechanism.

Yet another GarageBand related patent application was published by the U.S. Patent Office today which covers different modes of touch gesturing in context with iPad's version of GarageBand. For more on this, see "Electronic Percussion Gestures for Touchscreens."

Hi Steve, to answer your question, the patent was originally filed in Q1 2011, so Steve was still with us.

At least I will have a reason to pull out my PowerMac G4 out of the closet. So, was this patent thought up before or after Steve's passing?