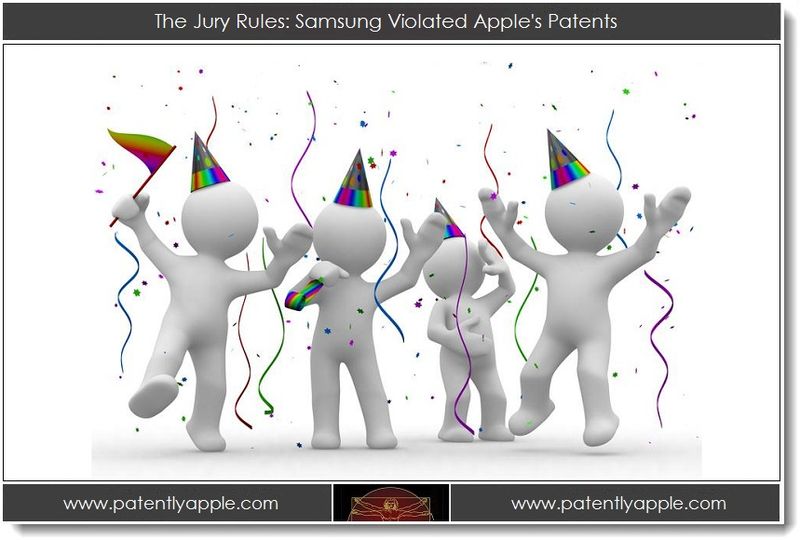 After just three days, the jury in the Apple v. Samsung patent-infringement trial tells the judge it has reached a decision. The jury had to come to a unanimous verdict. Jurors were given a 109-page document with instructions about the case. The jury has ruled that Samsung Violated Apple Patents. Apple sued Samsung last year for copying the essential features of its iPad and iPhone. Today's verdict tells us that patents do in fact matter. It's certainly a great day for innovators: Congratulations Apple!  August 25: Report Updated with Key Patent Links and more 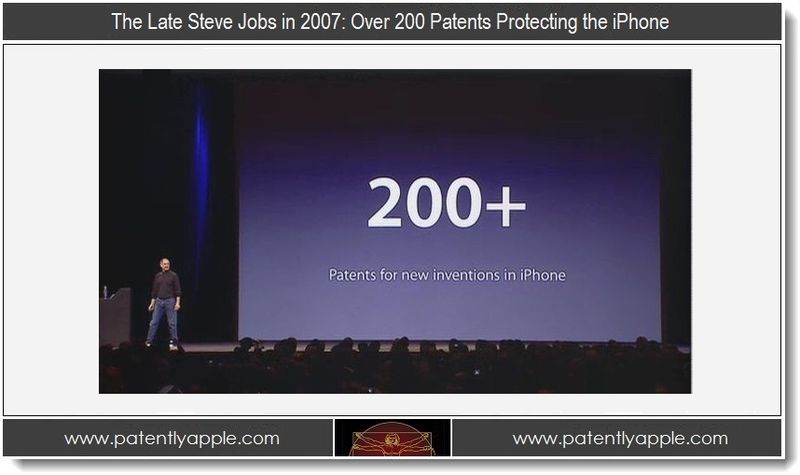 When Steve Jobs introduced the iPhone back in 2007 he stated the following: "We've been pushing the state of the art in every facet of this design. We've got the multi-touch screen, miniaturization, OS X in a mobile device, precision enclosures, three advanced sensors, desktop class applications, and widescreen video iPod. We filed for over 200 patents for all of the inventions in iPhone and we intend to protect them!"

In our October 2011 report titled "Apple's "Slide to Unlock" Patent Stirs Up a Hornet's Nest in Taiwan," we presented the video where Steve Jobs points out the differences between the smartphones of old and the new iPhone; a tactic that was used in the Apple vs. Samsung trial.

Well before the trial ever began, Patently Apple was recognized as being on record pounding the table with the very same argument that was used at trial:

"Today, Apple is embroiled in a series of lawsuits against Samsung, HTC and others over many aspects of the iPhone, iPad and iOS features. In 2007, Samsung, HTC, Google and all others in the industry didn't have a smartphone with the likes of Apple's iPhone features. They didn't have the solutions that Apple eloquently brought to market to make a smartphone truly smart. Apple carefully and meticulously crafted a full end-to-end smartphone solution. So when the copycat's and their followers whine in public and on blogs that Apple should learn to compete instead of initiate litigation – I bowl over with laughter."

Some of the Trial Patents Originally Covered by Patently Apple

Trial Patent 7,469,381 was reported on by Patently Apple on March 06, 2012 under the title "Android OEM's won't like Apple's Latest iOS Patent Win." That was sure the right call at the right time.

Trial Patent 7,864,163 was reported on by Patently Apple on January 04, 2011 under the title "Apple Granted a Major Multi-Touch Patent Relating to E-Docs."

The bottom line is that the jury has awarded Apple $1.051 billion in damages. The jury further found that in some cases, the infringement and trade dress dilution was found to be willful. That could lead Judge Lucy Koh to raise the amount of damages awarded to Apple. Willful Infringement could lead to triple damages in some cases. In time we'll know if that pans out.

The other trial between these two tech giants played out in Korea today with a much different verdict. In that case, both sides took a hit. Similar patent cases between Apple and Samsung are still to be heard in Germany, the United Kingdom and Australia.

Tim Cook's Response to the Verdict

"Today was an important day for Apple and for innovators everywhere.

Many of you have been closely following the trial against Samsung in San Jose for the past few weeks. We chose legal action very reluctantly and only after repeatedly asking Samsung to stop copying our work. For us this lawsuit has always been about something much more important than patents or money. It’s about values. We value originality and innovation and pour our lives into making the best products on earth. And we do this to delight our customers, not for competitors to flagrantly copy.

We owe a debt of gratitude to the jury who invested their time in listening to our story. We were thrilled to finally have the opportunity to tell it. The mountain of evidence presented during the trial showed that Samsung’s copying went far deeper than we knew.

The jury has now spoken. We applaud them for finding Samsung’s behavior willful and for sending a loud and clear message that stealing isn’t right.

I am very proud of the work that each of you do.

Today, values have won and I hope the whole world listens."

The addition of "Tim Cook's Response" is an update to our report: August 25, 2012 8:30 AM MST Source. For those wishing to review the Jury's Verdict Form, click here.

It's about a small inventor who left the auto industry and had to fight the big car companies that tried to rewrite history with their own patents and bury this guy in court. It's a true story. So if the intermittent window wiper feature is patented, there are more patents on cars than you can imagine.

You have to be a bit naive to buy into Samsung's yapping about losing to Apple and that copying is OK. Samsung is the number two patent filer in the world under IBM. Do you think that they're patenting thin air, CodeRed? Are they not trying to protect their own patents? Are all Samsung patents worthy? It's obvious that you're buying into their propaganda plain and simple. They know all to well the importance of patents. And Pinch to Zoom is "obvious" now but it wasn't before Apple intoduced it!

Thanks for your honest comment CodeRed, but I vehemently disagree.

Software patents are BS to begin with. Imaging if Ford patented the Steering Wheel, blinkers, brake pedals, etc. You might as well just patent the 'car', because it basically would make it impossible for any other company to make one that worked. Pinch to zoom? Single finger scrolling? They are the obvious ways (possibly the only good ways) to control a touch screen device.

You shouldn't care about the law suits as you're a consumer. But since you do, wishing them away isn't the solution. Samsung patents everything under the sun, so them pretending that copying is OK is ludicrous. They got caught and they have to pay the piper as Apple will if found guilty. Here's to hoping that Samsung and all android OEM's will push harder for more original innovation.

So it sounds like we can both agree on this then. I think there is nit picking on both sides. I just wish all the law suites would stop. Its gone from being about intellectual property to being a pissing match and no one is innocent. Even Google, who has tried to keep out of this stuff, has recently started to more actively participate.

No one is saying that iOS should be the only OS. What's being said is that they, Samsung + Android, should have stuck to inventing an original OS. Today, Android is trying to do so and are succeeding. But the fact is that they did copy Apple's original iPhone and iOS because it was running away with the market and Google and Samsung sought to copy Apple's success.

Competition is good, like what Microsoft is doing with the Metro like interface that's completely different from iOS. Bring on the competition that does their own design. We all win when competition competes with new ideas and not copying.

As an Android fan who also likes Apple's products I am disappointed with the ruling. Like the South Korean court I think both were violating each others patents and so there should be an exchange of ideas.

As for design patents, I have actually spent a lot of time researching that and it simple makes it so you can have a monopoly on shape. I have very mixed feelings about this ruling as you can tell. Still, there are some advantages to this ruling if it is up held. It would challenge innovators to create other ways of doing things. This in turn will hopefully lead to a better market. Still, this ruling can lead to a limited market. I personally think that the Apple, Microsoft, Google competition has made the market better.

If iOS were the only mobile OS I personally think it would have stagnated. By Android being present in the market it forces both to improve. In fact, iOS 6 is playing catch up to a lot of features that Android 2.3.4 (the most popular version of Android) has. This isn't an issue of which is better. Most of the time its a matter of preference.

My point is that by both existing there is improvement in the market. I personally think that Samsung should have licenced things like pinch to zoom and the like since that was clearly Apple's intellectual property, but to say that rounded rectangles are Apple's exclusive property is crap. Any ways, there is my two bits.

Aa great day for hard working men and women who come up with ideas and work hard to take it to the next step. Obviously a sad day for copiers who just wait to duplicate others work.

Yay! The good guys finally got a good punch in. I say stop in inflow of that lazy copy cat Samsung ASAP. Let them come up with their own inventions!