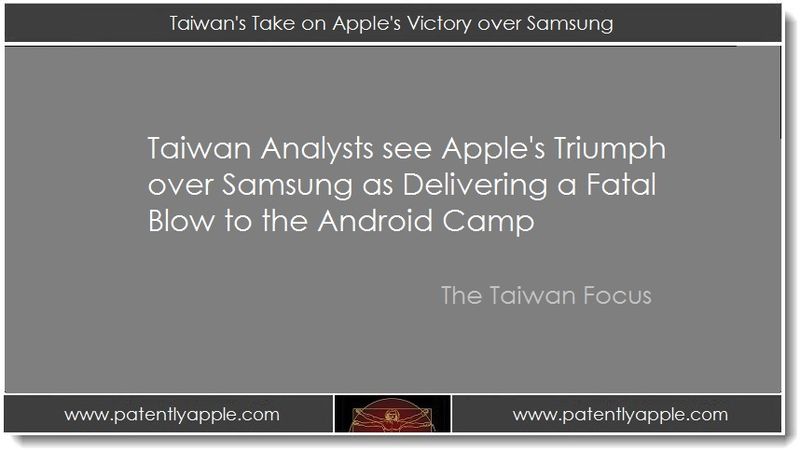 A Taiwan report out this morning shows us a little of how their media is taking the Apple v. Samsung verdict that was handed down on Friday. The final outcome of the case, they state, is expected to have a ripple effect on the smartphone market. Some local analysts see Apple's triumph over Samsung as delivering a fatal blow to the Android camp.

According to Taiwan analysts, Samsung's legal defeat will make other device makers relying on Android more reluctant to use the software at the risk of getting dragged into litigation with Apple.

This was echoed in China Daily's report which stated that "The verdict could lead to an outright ban on sales of key Samsung products and will likely solidify Apple's dominance of the exploding mobile computing market.

A number of companies that sell smartphones based on Google's Android operating system may now face further legal challenges from Apple, a company that is already among the largest and most profitable in business history."

The Taiwan Focus states that Taiwan analysts are also predicting "that Apple and Microsoft's Windows Phone could dominate the global smartphone market in the future." In my view, that's a little optimistic to be positioning Windows based phones as the real competitor to the iPhone at this juncture due to Apple's victory over Samsung – but that's how they see it.

The Taiwan Focus report adds commentary from the China Times which is reporting that the National Taiwan University Vice President Tang Ming-je has stated that the next round of the smartphone legal battle will mainly involve Apple and Google.

Tang went on to state that Taiwanese companies should endeavor to innovate and build up their own patent portfolios to survive in the fiercely competitive high-tech market.

The last point that is made in the report is a little like the tale of Chicken Little by suggesting "that local vendors in the information and communications technology (ICT) industry should seek to expand their market shares in mainland China and India where Apple and other ICT giants haven't patented their intellectual property as of yet."

Although some may view Apple's victory as a sign that the tech industry's "sky is falling," I'm sure that the determination of Taiwan OEM's will be to build their own patent portfolios as Mr. Tang suggests so that they could fend off Apple and not run. But if they continue to copy Apple, then all bets are off.