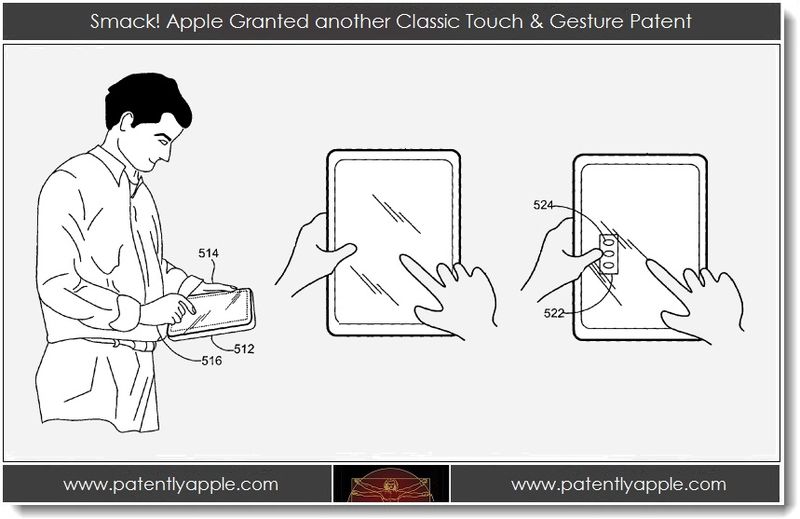 When I first began covering Apple's patents, this one was one of the first to really excite the Mac Community, even though the negative naysayers were pounding the table saying that Apple would never, ever again touch a tablet after the failed Newton. Well, we all know how wrong they were, again. Today, Apple has been granted yet another classic touch and gesture patent to add to their already impressive roster of key touch related patents. Apple has smacked another touch related patent out of the park and delivered more grief for their copycat competitors. Apple's patent covers their classic pinch and zoom feature along with and a number of virtual controls such as a scroll wheel, floating controls, page-turns for eBooks and more.

Apple has received a major Granted Patent relating to gestures and methods of implementing gestures with touch sensitive devices. Examples of touch sensitive devices include touch screens and touch pads. The invention also pertains to user interfaces and methods of implementing user interfaces with displays. Much of Apple's granted patent relates to a virtual scroll wheel and buttons.

In one embodiment, Apple's invention relates to a method performed on a computing device having a display and a touch sensing input device. The method includes sensing touches. The method also includes displaying and enabling a GUI element when a touch is detected. The GUI element is based on at least one of the following: (a) the application currently running on the computing device; (b) the current state of the application; and/or (c) one or more characteristics of the touch. The characteristics include, for example, touch location, touch ID, number of touches, and touch motion.

The method further includes disabling and removing the GUI element from display when one of the following events occurs: (a) the touch is no longer detected, (b) a touch has not been detected for a preset amount of time, (c) a certain amount of time has gone by since the step of displaying and enabling was first presented and (d) a user selection. 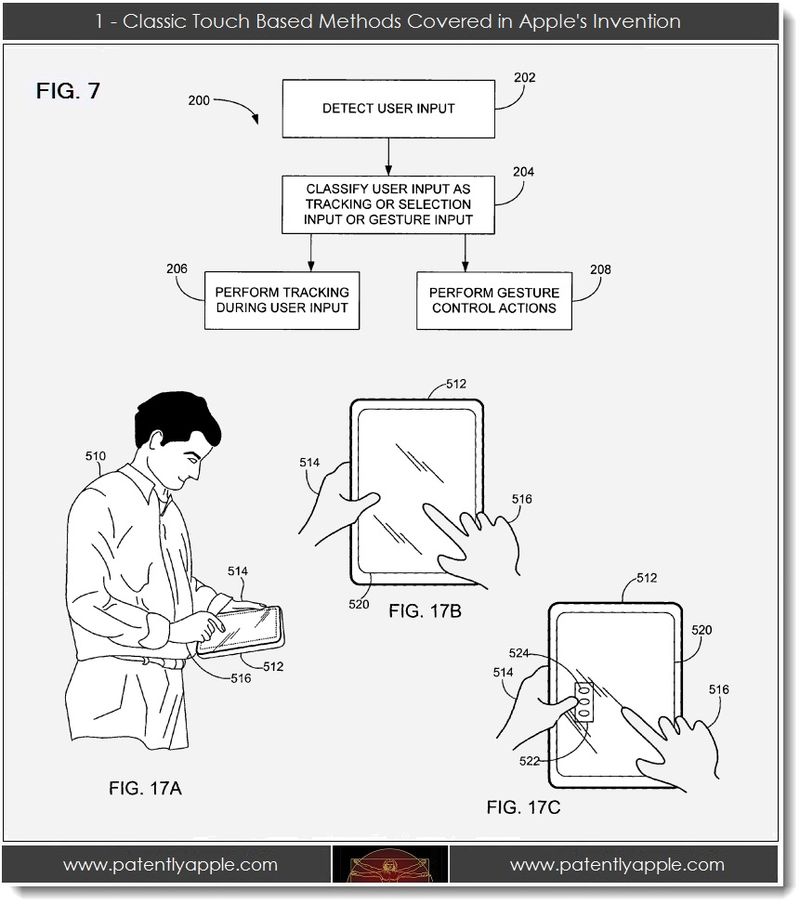 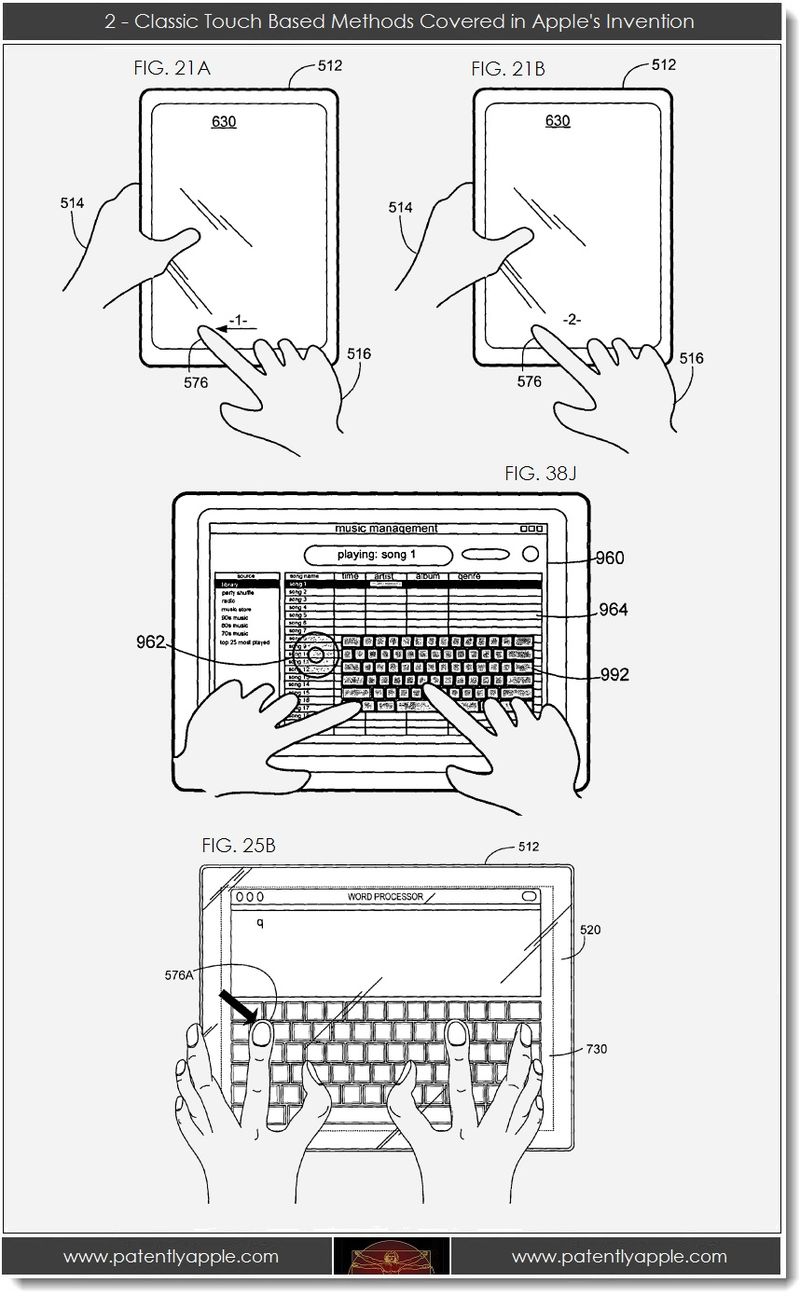 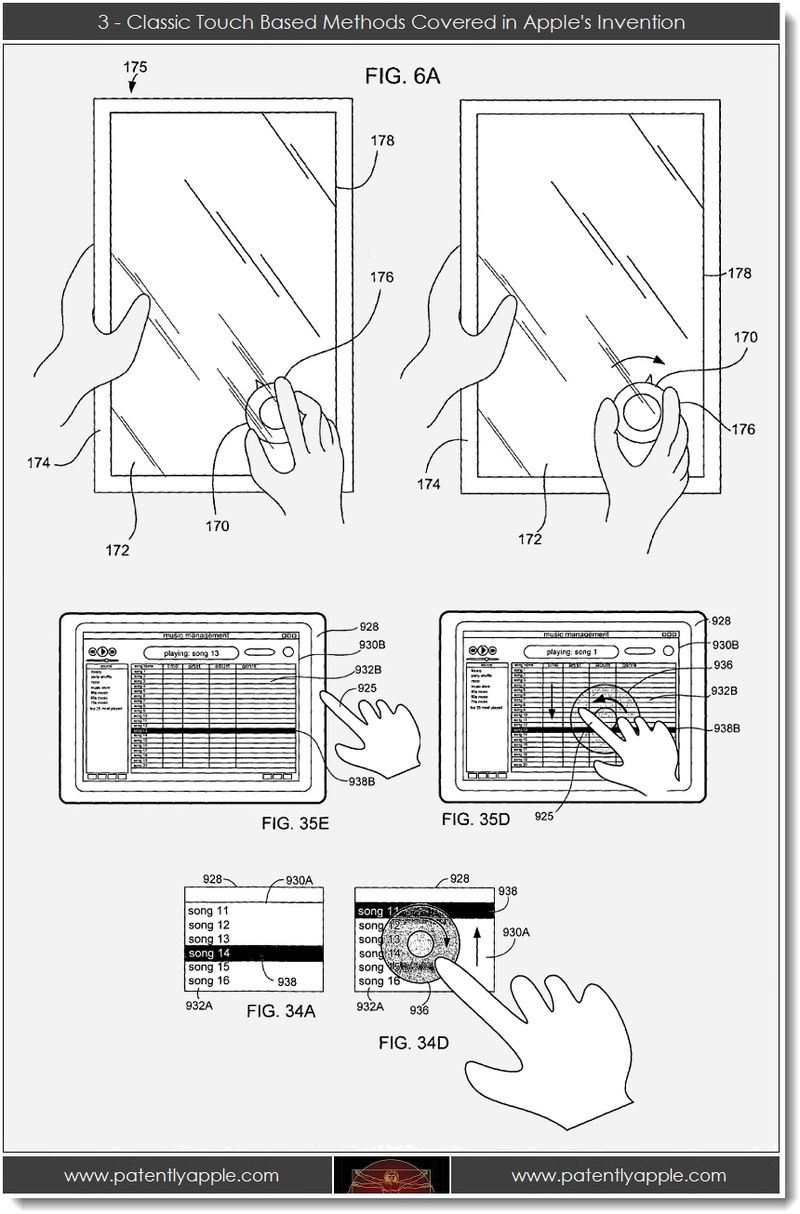 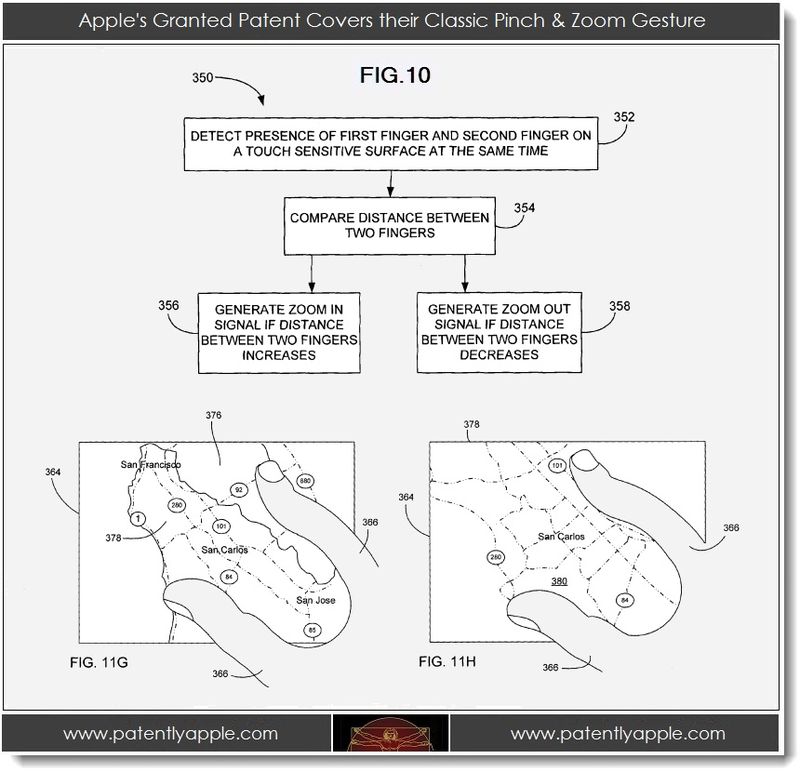 Apple credits Steve Hotelling, Brian Huppi, Joshua Strickon, Duncan Kerr, Bas Ording, Imran Chaudhri, Christie Greg and believe it or not, Jonathan Ive as the inventors of this granted patent which was originally filed in Q1 2005 and published today by the US Patent and Trademark Office. For those wishing to review this patent in its entirety, check out this classic patent.

Apple's patent also includes a number of other referenced and supported patents relating to different gestures. Examples of scrolling through lists can be found in U.S. Patent Publication Numbers 2003/0076303A1, 2003/0076301A1, 2003/0095096A1, which are herein incorporated by reference. Additionally, U.S. Patent Numbers 5,612,719 and 5,590,219, assigned to Apple Computer, Inc. describe some other uses of gesturing. U.S. Paten number 5,612,719 discloses an onscreen button that is responsive to at least two different button gestures made on the screen on or near the button. U.S. Patent number 5,590,219 discloses a method for recognizing an ellipse-type gesture input on a display screen of a computer system.

This kind of things is what make apple a great company, the research and innovation is the key for great products, and this GUI system looks very good.

I can see why Apple wanted this patent, as it can be argued that a scroll wheel is a vital part of their trade dress related to the iPod, but who else is going to use that? Samsung? Maybe, but I don't even know if they're that brazen.