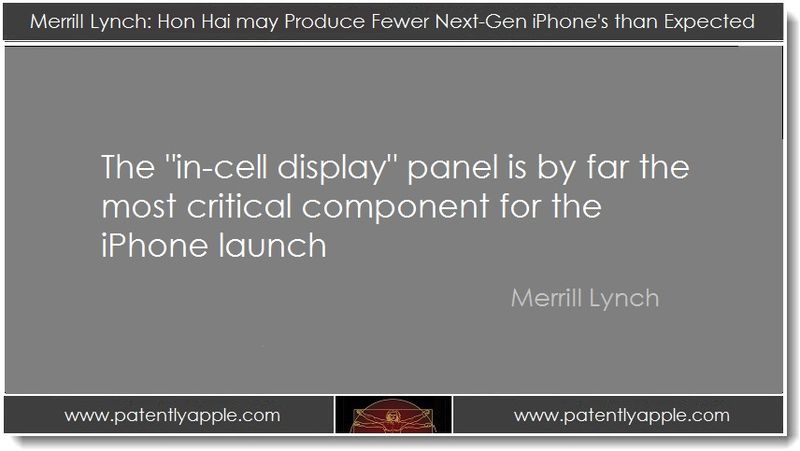 A new report out of Taipei today reports that Bank of America Merrill Lynch stated on Wednesday that Taiwan's Hon Hai Precision Industry Co. may produce fewer units of Apple Inc.'s next-generation iPhone than expected in the coming months because of supply constraints faced by the device's display. This Report was Updated Aug. 23, 2012

Merrill Lynch stated in its latest research note that "Hon Hai, which assembles iPhones and iPads for Apple, is expected to ship 5 million to 10 million iPhone 5s in the third quarter and 30 million to 40 million units in the fourth quarter."

"We believe this number refers to production capacity rather than actual production output. Moreover, we think that supply chain bottlenecks may be a drag on the initial volume ramp," Merrill Lynch analyst Robert Cheng wrote in the note.

Cheng went on to state that "The "in-cell display" panel is by far the most critical component for the iPhone launch. The display integrates the touch functionality into the LCD array, and the production process is much more complex than for previous iPhone displays."

Finally Cheng noted that "It will take at least a few more months for the panel's suppliers, including LG Display Co., Sharp Corp. and Japan Display Inc., to achieve a stable mass production level with yield rates of 70 to 80 percent."

Late yesterday evening at 11PM EST, TheWall Street Journal was able to get LG Display Co. to go on record concerning their in-cell display production. The report states that "The chief executive of LG Display Co. said the company started the mass production of panels using so-called in-cell technology earlier this month, a new display technology that is widely expected to be used for Apple Inc.'s next
iPhone device."

LG Display's Chief, Han Sang-beom stated that "We had some hard times (in developing the new in-cell technology) at first ... but it seems those hard times have finally ended."

This confirms the problems that the Merrill Lynch analyst spoke of in our report. Whether LG's production is actually able to be ramped up to full capacity at this time is unknown. Not being a subscriber to The Wall Street Journal Online, I 'm unable to report on any other statements LG may have made concerning their in-cell displays.