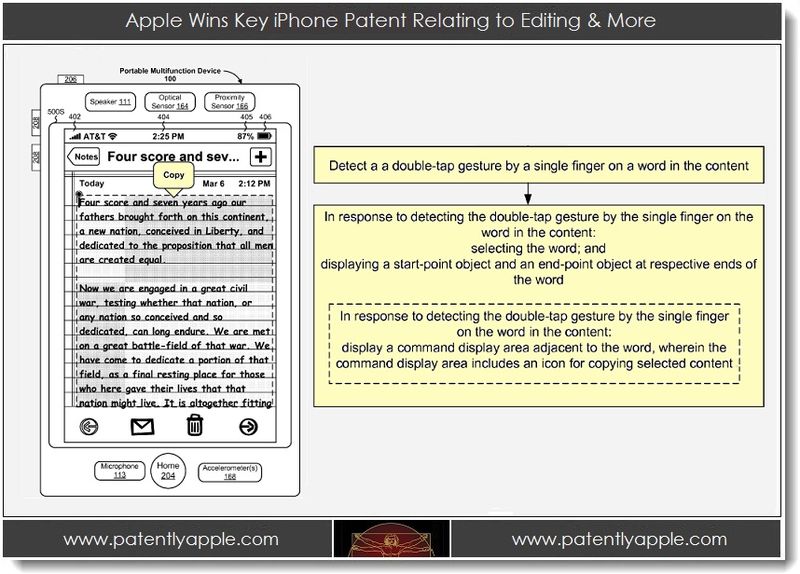 The first patents to be granted to Apple after the jury handed them a victory over Samsung last Friday, are yet more iPhone related patents to strengthen their already lethal portfolio. The first granted patent is a key one relating to editing on iDevices including the iPhone. Another granted patent supports one of the very patents that were used in the Apple v. Samsung trial. Amongst the other iPhone related patent wins today is a partial GUI design.

Apple has received another major Granted Patent today relating to iDevices. This particular patent covers methods and graphical user interfaces that generally relates to conducting edits (e.g., cutting, copying, or pasting user-selected content) on such multi-touch displays. Humorously, one of the patent figures noted below that are describing the editing process, is editing a document called "Copycat" wherein the revolutionary iPhone is being described. Hmm, I wonder who Apple was thinking of at the time - (Ha!). 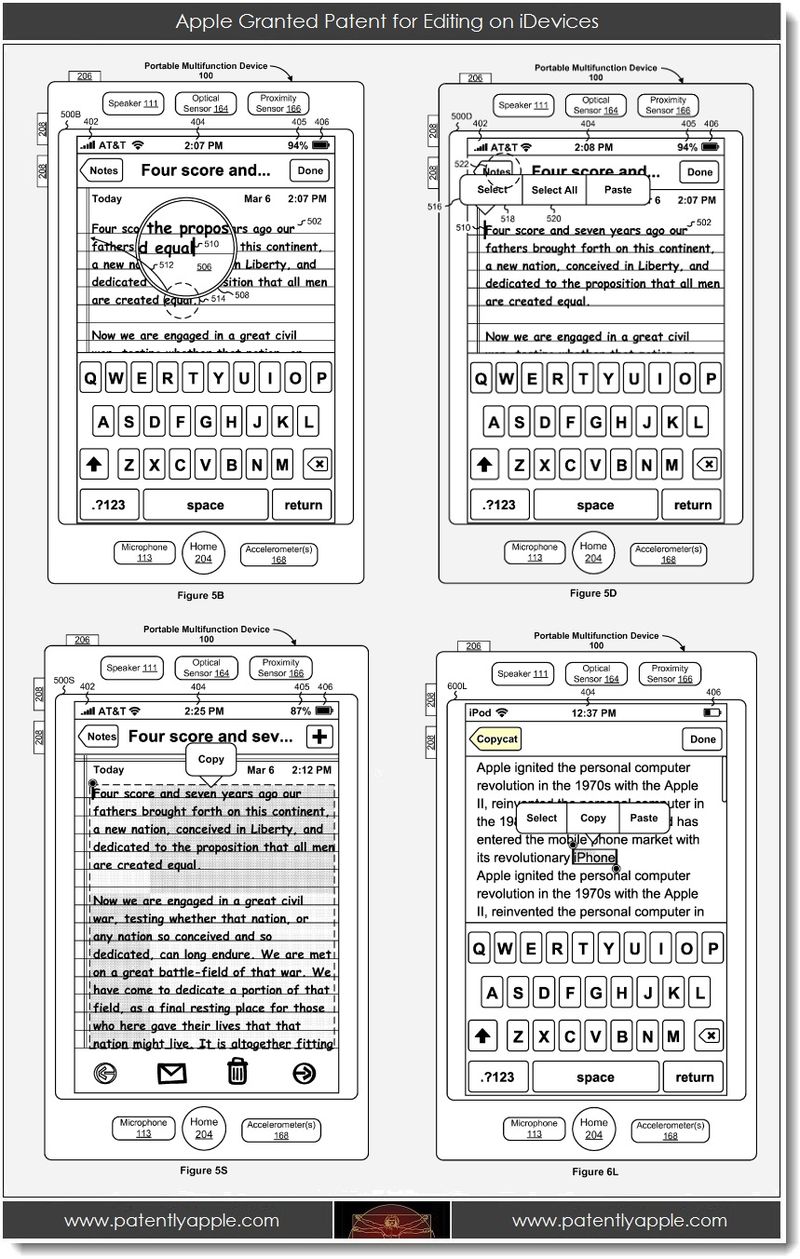 During the Apple v. Samsung trial, Apple presented a few slides demonstrating the so-called "smartphones" prior to the iPhone. The earlier smartphone hardware from Samsung was shown to be riddled with hard physical buttons. In Apple's current patent on editing on an iPhone, they first describe the problems of smartphones prior to the iPhone as follows:

"As electronic devices become more compact, and the number of functions performed by a given device increase, it has become a significant challenge to design a user interface that allows users to easily interact with a multifunction device. This challenge is particular significant for handheld portable devices, which have much smaller screens than desktop or laptop computers. This situation is unfortunate because the user interface is the gateway through which users receive not only content but also responses to user actions or behaviors, including user attempts to access a device's features, tools, and functions. Some portable communication devices (e.g., mobile telephones, sometimes called mobile phones, cell phones, cellular telephones, and the like) have resorted to adding more pushbuttons, increasing the density of push buttons, overloading the functions of pushbuttons, or using complex menu systems to allow a user to access, store and manipulate data. These conventional user interfaces often result in complicated key sequences and menu hierarchies that must be memorized by the user.

Apple's granted patent is extraordinarily detailed and has to be read in its entirety to be fully appreciated. The patent covers such matters as editable content at a first magnification, a content magnifier, an insertion marker, and a command display area. The three main aspects of the patent relate to a method, a graphical user interface and a multifunctional interface.

Apple credits Senior VP of iPhone Software Scott Forstall and team members Bas Ording, Kenneth Kocienda, Bradford Moore, Marcel van Os and Richard Williamson as the inventors of granted patent 8,255,830 which was originally filed in Q3 2009 and published today by the US Patent and Trademark Office.

Apple Granted Patent for Device, Method, and GUI for e-Document Translation on a Touch Device

Apple has received a Granted Patent today that generally relates to devices with touch-screen displays, and more particularly to scrolling lists and to translating, rotating, and scaling electronic documents on devices with touch-screen displays. This particular granted patent 8,255,798 is related to one of the key patents that were used against Samsung at trial (7,469,381). 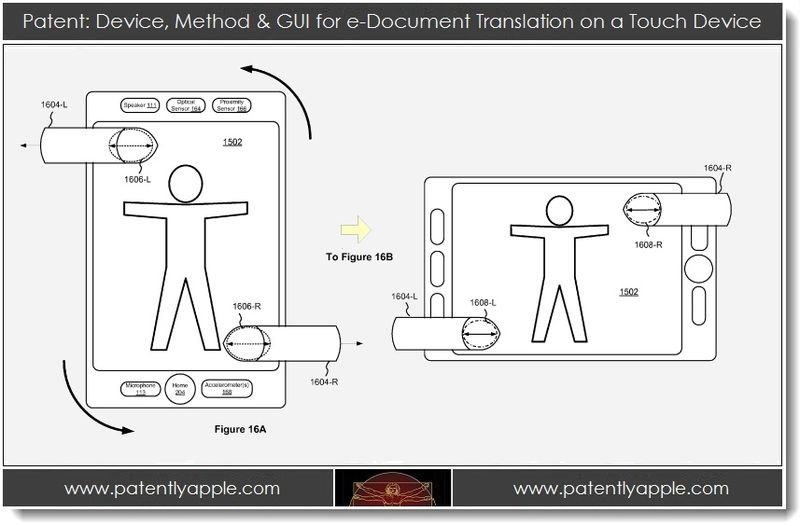 Apple credits Bas Ording as the sole inventor of this patent which was originally filed in Q4 2008 and published today by the US Patent and Trademark Office.

Other noteworthy granted patents issued today relating to the iPhone include the following: 1. "Missed Telephone Call Management for a Portable Multifunctional Device" – was originally filed in 2006 and incorporates several other patents listed in the document; 2. "Portable Touchscreen Device, Method, and Graphical User Interface for using Emoji Characters while in a Locked Mode" – was originally filed in 2008; 3. "Mobile Telephone Terminal with Improved Utility" – was originally filed in 1999. Apple's invention generally relates to portable telephone terminals and, more particularly, to a portable telephone terminal having an answering function for switching between answer messages in accordance with a caller number and the time, and also to a terminal operable by a remote telephone set using caller number authentication.

Apple has been granted four design patents today covering the iPod nano, the front and back iPhone 4 housing plates, an iPhone interface for phone functions, and one which appears to relate to the iPhone on an iPad, yet it's one that I'm not familiar with. The latter is illustrated below (top figure). 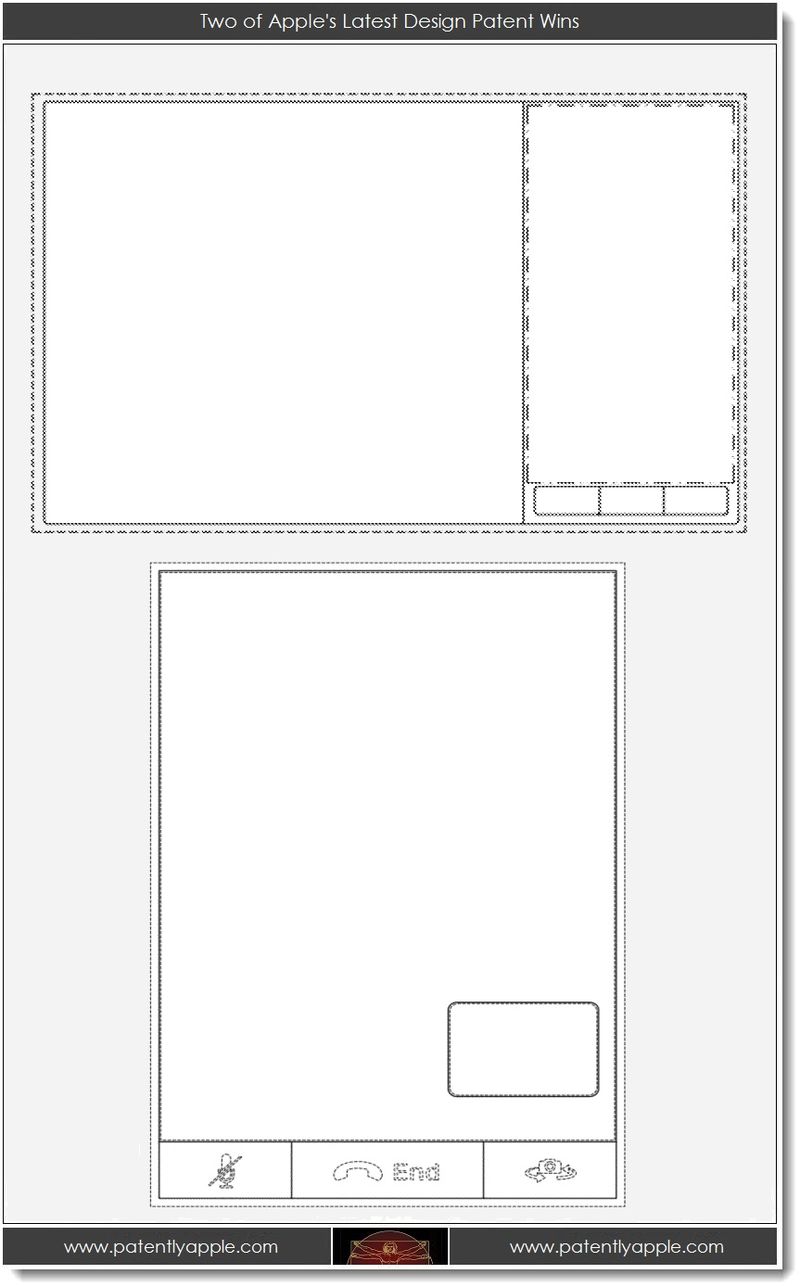 The iPod nano design patent that was granted to Apple today lists the late CEO Steve Jobs as one of the credited designers.