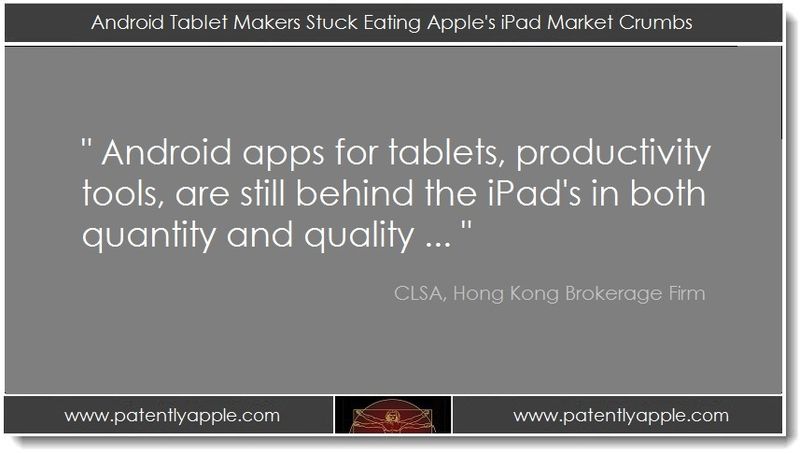 A new report out Taiwan this morning states that Apple will continue its dominance in the worldwide tablet computer market with its iPad, but that other firms making tablets powered by Google Inc.'s Android system might pick up sales in the 7-inch segment. Yet even with a pick-up in sales in 7 and 10" tablets, the report continues to show us that the current block of Android OEM's will still be eating the iPad's market crumbs for some time to come.

However, CLSA's estimates of the market scale do not factor in Apple's anticipated "iPad mini," a smaller and cheaper model that is expected to be launched later this year.

Nicolas Baratte, head of technology research at CLSA, said Apple will continue to dominate the 10-inch tablet market with an 81 percent market share in 2012 and 72 percent in 2013, but he added that 7-inch Android tablets are going to take off.

"Android apps for tablets, productivity tools, are still behind the iPad's in both quantity and quality but catching up," he added. "As such, Android Tablets volumes could become larger than Apple's iPad by 2015, as has happened for smartphones."

What matters is sticking with shorter term forecasting that could be realistically measured. Who knows what's going to happen in 2015 or 2016. Breakthroughs from either side of the market could strike at any moment. So for 2012 and 2013, Apple's iPad will remain to be king, with the Android camp eating their left over market crumbs.

Android tablets are crap. Quit making excuses for crappy devices and giving people terrible advice Apple Hater. The only thing dull and cluttered is your brain. Apple products rule and rock! Speaking of rocks, please stay under yours troll.

NWell no shit...retailers tell you to get an iPad because they are told to. An android tablet is built for more customization. Also your fancy iPad has an A5 processor built years ago. Don't judge a book by its cover. Also it has a dull menu cluttered with icons. Apple does not innovate they recycle.

My kids are in Karate, so while they are there I run across the street to Bestbuy and hangout 3 times a week. I know the employees well, as you can imagine. I even sell Apple products to customers while there. Probably sold 20 or so products. (where's my commission?)

I am not exaggerating when I say this, but I have NEVER seen anyone buy an Android Tablet, not one. Their displays are scattered, messy, unorganized, half empty of products, and generally not a fun shopping experience for anyone. Last week I asked one of the employees if they had ever sold an Android Tablet and she said "no". She tends to steer people to the iPad for obvious reasons. I asked her if people come in looking for Android Tablets specifically and she said "no". Everyone asks about the iPad. The Android products are collecting dust.

This is just my own experience, but I can't imagine it's much different everywhere else.