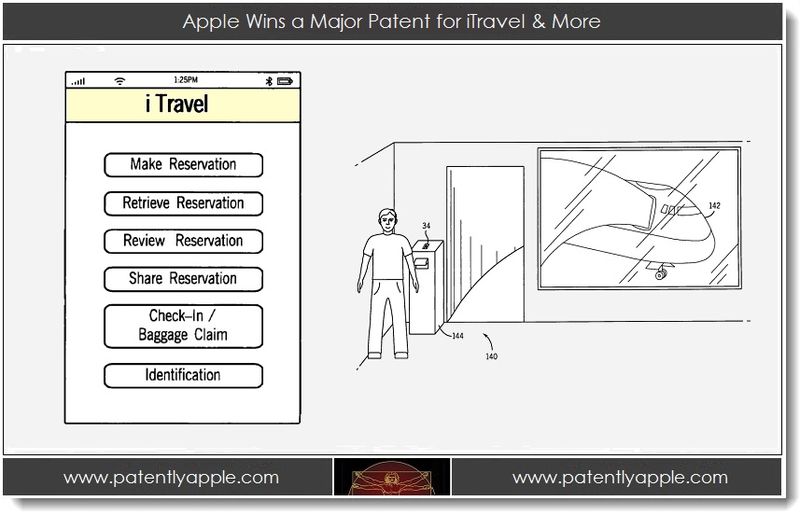 The US Patent and Trademark Office officially published a series of 23 newly granted patents for Apple Inc. today. In our first granted patent report of the day we mainly focus on a major patent relating to iTravel, Apple's transportation check-in system. The timing couldn't be better for this patent as Apple recently announced that a new feature called "Passbook" was coming to iOS 6 this fall. Scott Forstall, Apple's Senior Vice President of iPhone Software, stated that Passbook would include travel services such as a boarding pass and express check-in which today's iTravel patent covers. The Near Field Communications (NFC) aspect of the patent will also be important for Apple's future iWallet application. To round off our report, we cover two of Apple's latest industrial designs wins and list an additional ten utility patents for the super geeks and legal professionals amongst us to review.

Apple has received a major Granted Patent that relates to transportation check-in and, more particularly, to employing near field communication (NFC) for identification and ticketing by transportation providers.

Apple's iTravel check-in system will work with Macs, but more importantly, with iOS devices such as the iPhone, iPad and iPod touch. Ticketing and identification information will be stored on the iOS device and transmitted, such as via near field communication, to another electronic device. The handheld device may be used to check into flights, hotels, car rentals, cruises, trains, buses, and so forth.

Apple states that travel information may be managed on the handheld device by a travel management application. Ticketing and reservation information may be entered into the application via several methods. For example, reservations may be made through the travel management application. In another embodiment, reservations may be retrieved from an email, a website, another electronic device, or via a carrier-provided confirmation number. Additional reservation retrieval methods may be employed, such as, for example, acquiring digital images of travel documents and extracting reservation images via optical character recognition software, barcode-reading software, or QR-code-reading software.

And lastly, identifications may also be managed via the travel management application. I.D.s, such as passports or driver's licenses, may be loaded onto the handheld device via, for example, scanning a radio frequency identification tag embedded in the I.D., or entering an I.D. number and looking up the corresponding identification information. Again, additional identification retrieval methods may be employed. 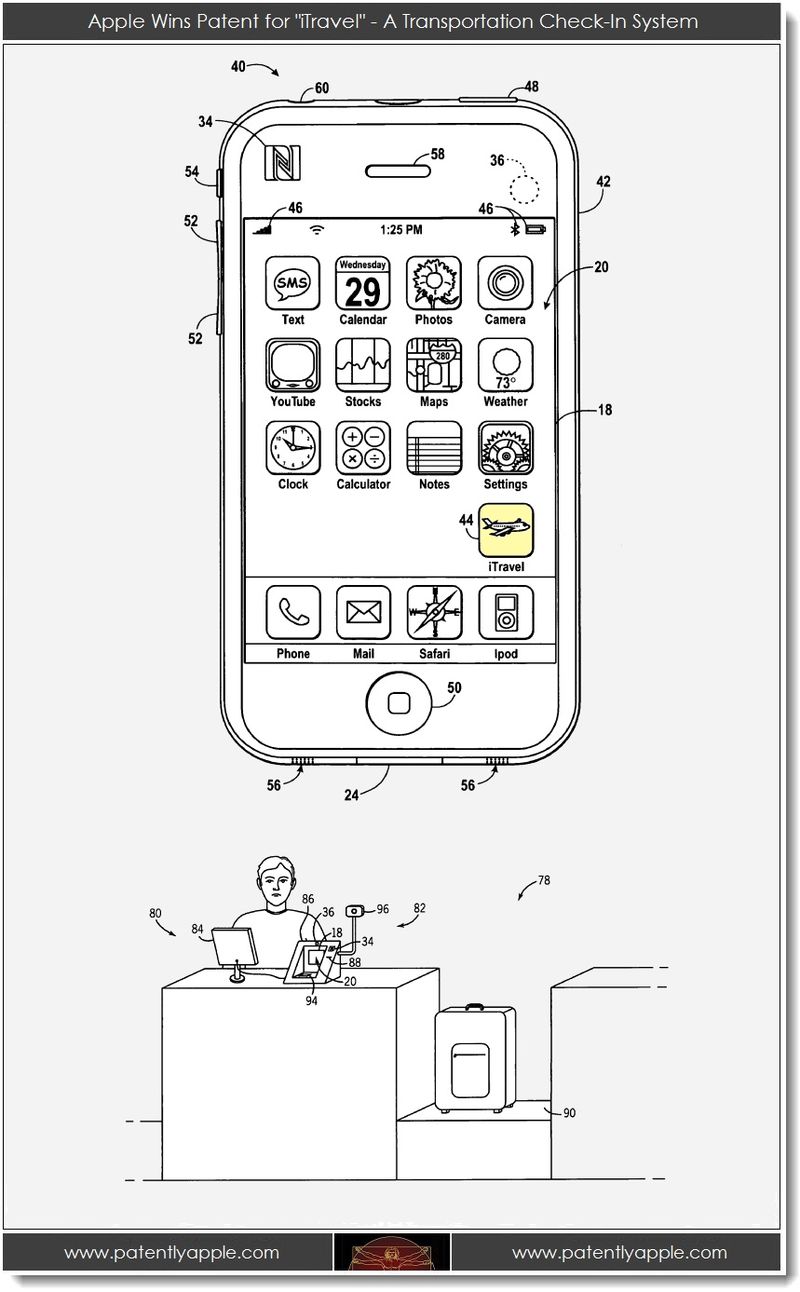 Apple credits Gloria Lin and Amir Mikhak as the inventors of this patent which was originally filed in Q3 2008 and published today by the US Patent and Trademark Office. For more information on this patent, see out original report titled "iTravel: Apple's Future Travel Centric App for the iPhone." For other general iTravel patents you could check out this link.

Apple has been granted two industrial design patents today covering the iPod nano and iPad Smart Case. I must have missed the memo about the iPad Smart Cover being rebranded the iPad Smart Case. Google still lists it as Smart Cover on some pages. Apple either had an IP issue regarding the name Smart Cover or they're thinking of adding an actual line of cases in the future and the new branding better reflects that change. A third reason could simply be a marketing gaffe. 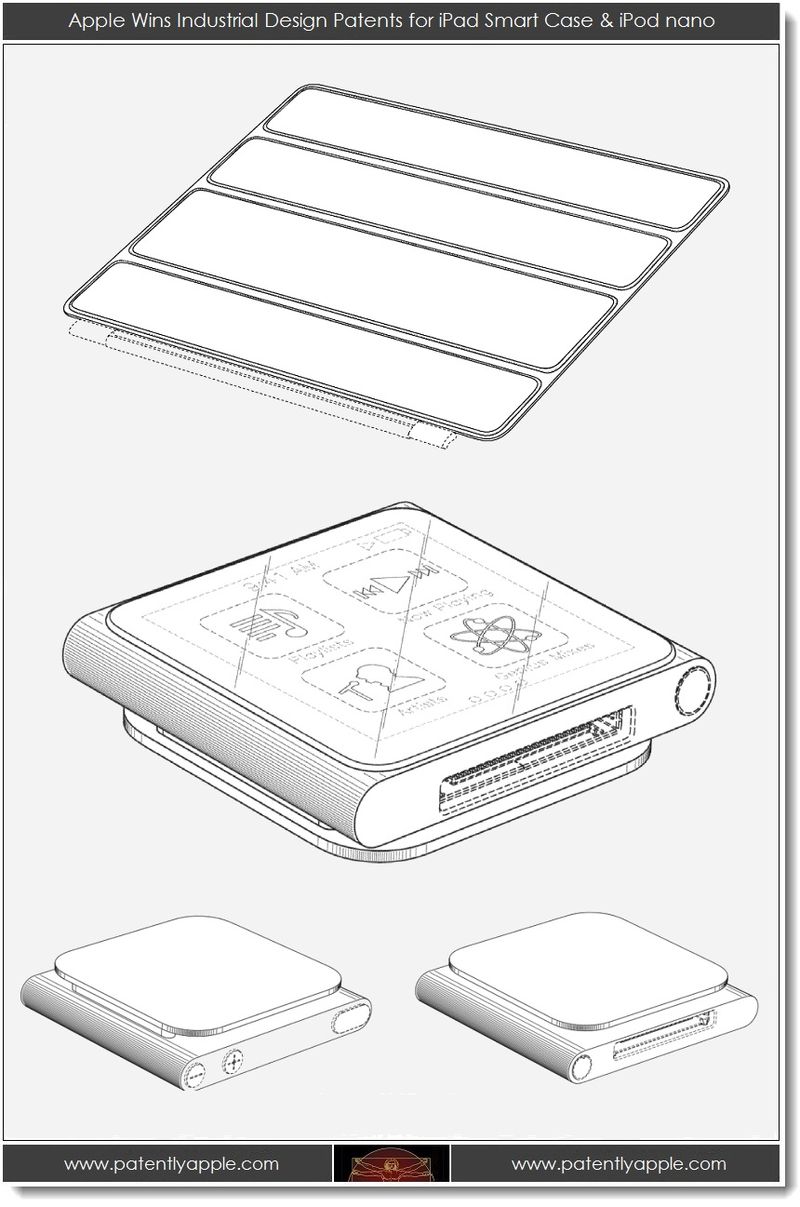 8,217,336 Light sensing device having a color sensor and a clear sensor for infrared rejection

8,217,889 Pulse-width modulation control for backlighting of a video display

8,218,509 Dynamic allocation of communication resources in a wireless system

8,218,380 Degradation equalization for a memory

8,219,787 Early release of resources by proceeding to retire store operations from exception reporting stage but keeping in load/store queue

Thanks for the feedback, Mark.

Once I had the chance to check it out, I saw that Apple sells both. Though I still missed the memo - Ha!