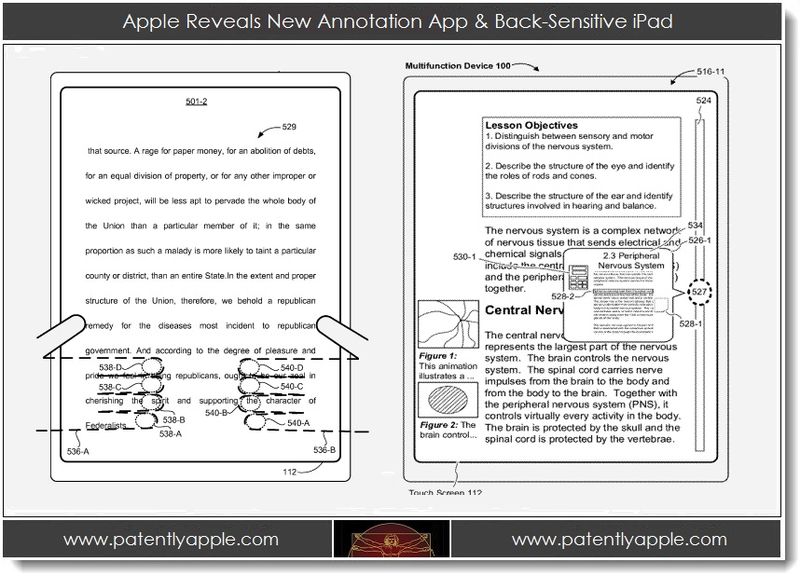 On July 26, 2012, the US Patent & Trademark Office published a patent application from Apple that reveals an exciting new annotation application that's in the works. If you consider that ten extremely detailed applications were published on this one project alone today, I'd have to say that it's likely a priority project. The applications cover new navigation and annotation modes that will assist readers working with electronic documents, digital books, newspapers and magazines. While it would take days to comb through these applications to list all of the coming features, our report focuses on just a few of them including a new annotation toolbar. At the end of the day, it was quite the surprise to find these patent gems and for students and professionals who need to use annotation tools, this is going to be a huge leap forward for the iPad. It's the kind of tool that will help the iPad push further into the enterprise and beyond.

The Problem with Today's Methods of Annotation

But existing methods for navigating and annotating are cumbersome and inefficient. In addition, existing methods take longer than necessary, thereby wasting energy. This latter consideration is particularly important in battery-operated devices.

The deficiencies outlined above and other problems associated with user interfaces for electronic devices with touch-sensitive surfaces are reduced or eliminated by the disclosed devices. In some embodiments, the device is a desktop computer. In some embodiments, the device is portable (e.g., a notebook computer, tablet computer, or handheld device).

Apple Reveals a Future iPad with a Touch Sensitive Backside

Days before Steve Jobs introduced us to the iPad in January 2010, we posted a report titled "Apple: The Tablet Prophecies" wherein we pointed to an earlier 2006 patent application that first introduced us to the concept of having a touch sensitive backside to a future tablet. In today's patent application, Apple reveals that advanced work in the area of document navigation and advanced annotation is pushing the concept of a backside sensitive tablet forward.

In Apple's patent FIG. 5K shown below we see an illustration of User Interface 500-K which includes electronic document 501-2, with body text 529, displayed on touch-sensitive display 112 of device 100 that includes a touch-sensitive surface on the back side, opposite the front side that has display 112. 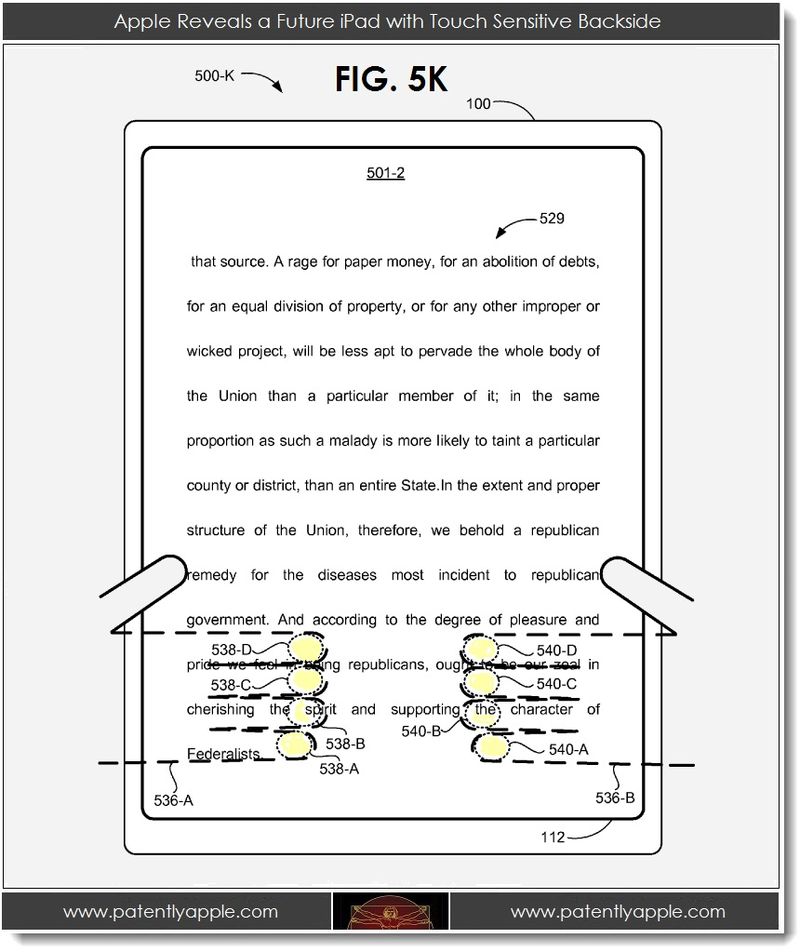 Left hand 536-A and right hand 536-B are holding device 100, with the thumbs on the front side and the non-thumb finger digits on the back side (as indicated by the dotted lines indicating the finger digits). In some embodiments, gestures 538 and 540 are each drumming gestures. Such a gesture could call up a split-keyboard, for instance. Sneaky Apple reveals little else as to how they'll develop the backside controls and/or corresponding gestures. 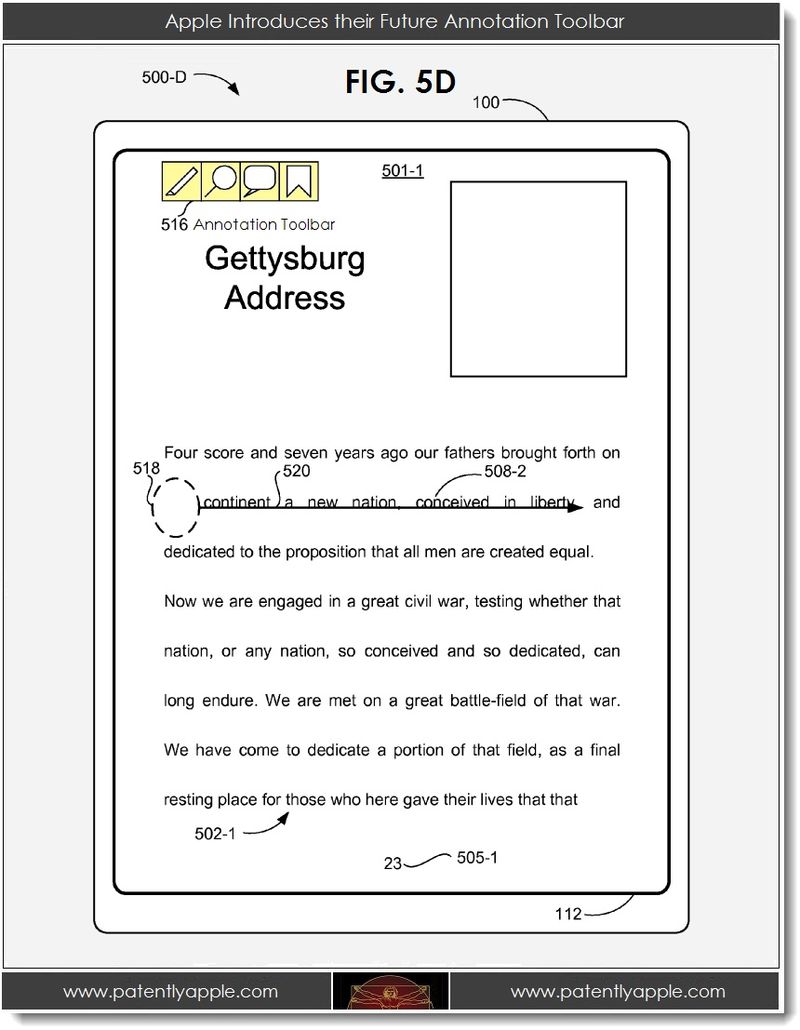 When electronic document is displayed in annotation mode, the focus is on efficient annotation (e.g., commenting, highlighting, bookmarking, etc.). 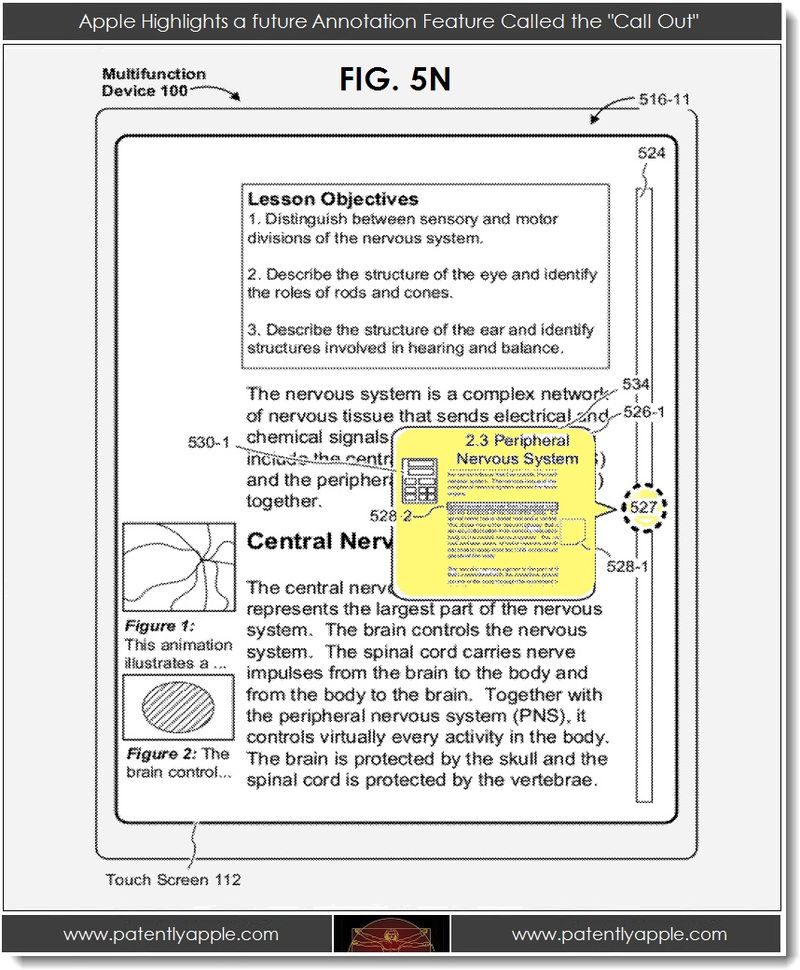 Apple's patent applications were originally filed in Q1 2011 and published today by the US Patent Office. Some of the inventors listed on these patents include Senior Software Engineer Don Beaver and Jay Capela who worked on Apple's resizing iOS user interface content. Legally, Apple doesn't have to be listed on patent applications even if their employees file the patent. Apple usually does this when a project is to be kept under the radar. Sometimes we're lucky in spotting these gems – and today just happens to be one of those days. To get a taste of just how in depth Apple's patents are on annotation and navigation, see patent application 20120188174.

Note to Referring Sites: We ask that referring sites only use a single graphic from our report. Thank you for your cooperation.