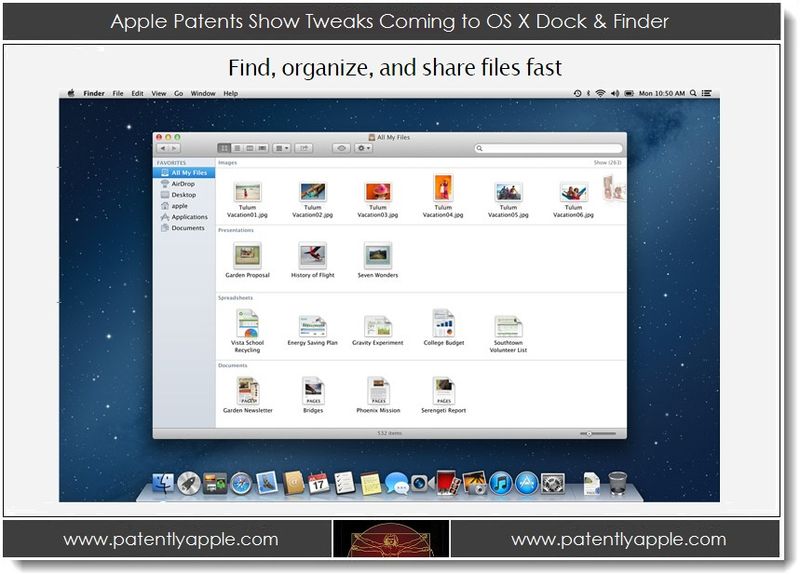 On July 19, 2012, the US Patent & Trademark Office published two patent applications from Apple that reveal coming tweaks to OS X and possibly iOS. The first patent covers changes coming to the OS X Finder while the other patent is a little more ambitious. We find Apple introducing us to "virtual boundaries" associated with an upgrade to the docking system that will accommodate multiple docks for apps, operating system components and more. It's also believed that the Finder tweaks found in today's patent may actually be associated with Apple's upcoming OS X Mountain Lion.

In some instances, the dock could be hidden from view when the user does not need access to items in the dock. For example, the user may not need access to the dock when the user interacts with an application or when a particular application is running in full-screen mode. In some implementations, the dock could be automatically hidden from view when the operating system determines that the user does not need to access the dock, such as after a certain amount of time has elapsed since the user's previous selection of an item in the dock. The hiding of the dock could also be performed in response to the user's movement of a visual cursor or pointer, such as automatically hiding the dock after a pointer is moved away from the dock for a certain amount of time. As the pointer is moved back within the region of the user interface previously occupied by the dock, the dock could be automatically presented again to allow the user to interact with the dock. 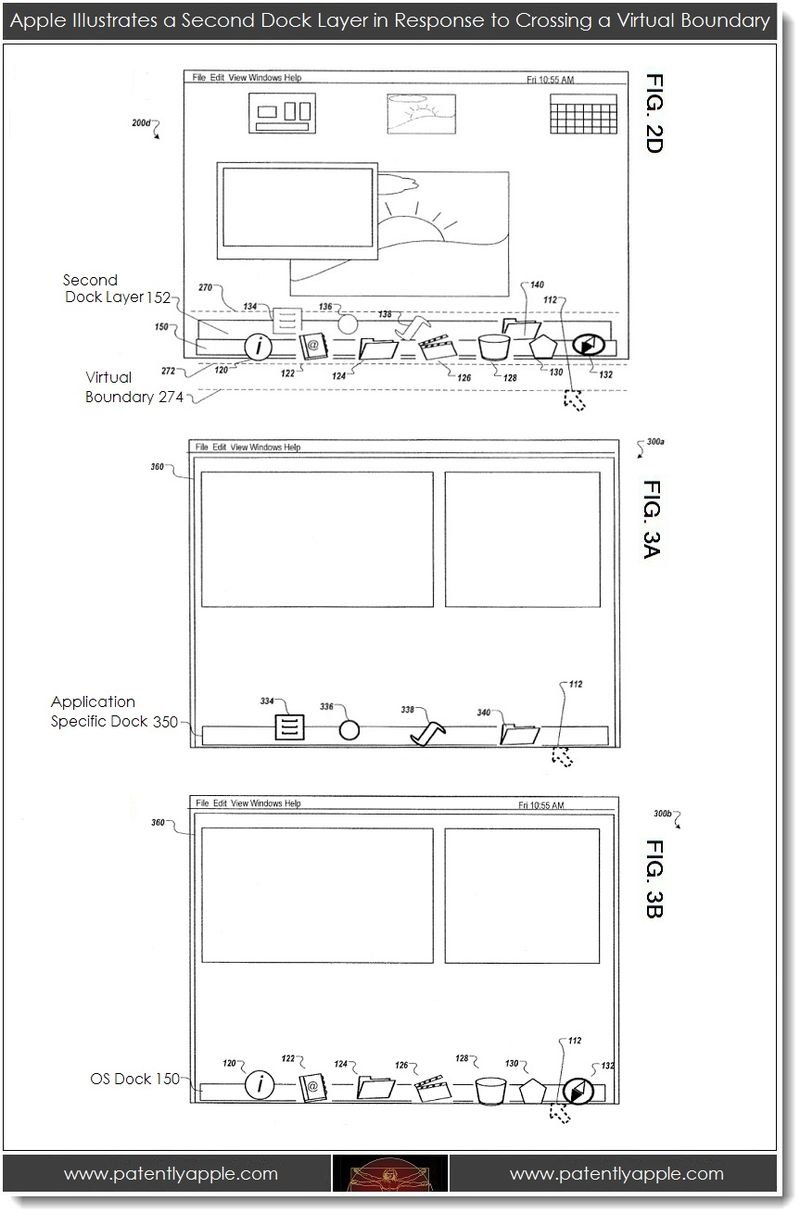 According to Apple, the use of virtual boundaries could be extended to include additional features for presenting objects in the user interface. Apple's patent FIG. 2D illustrates an example screenshot of an additional action triggered by the pointer 112 crossing a third virtual boundary 274.

In some implementations, multiple instances or layers of the dock 150 could be presented in the user interface. For example, a second layer 152 of the dock could be generated for display above the dock 150, allowing additional icons (134, 136, 138 and 140) to be presented to the user for further navigation.

Apple's patent FIGS. 3A and B above depict example actions for triggering indicators for switching between hidden objects. As described above in connection with FIG. 1, the triggering of different actions associated with hidden objects based on a pointer 112 crossing a virtual boundary could be applied in different scenarios. For example, a virtual boundary could be used to trigger toggling between different graphical objects.

Apple's patent FIG. 3B illustrates an example screenshot of an operating system dock 150 presented in a user interface while the application-specific dock 350 of an open application 360 is hidden from view. As FIG. 3B illustrates, the user could toggle between two different docks based on the user's actions with respect to the pointer and virtual boundaries defined in the user interface. A number of different user actions for toggling between docks are within the scope of the present invention.

Although the system definitely applies to OS X, the patent also describes one of the exemplary architectures to include features associated with Apple's iPad LTE and/or iPhone. Specifically, the patent points to "phone-related processes and functions." It could be a part of a future cellular MacBook or simply that Apple will apply multiple docks to both iOS and OS X.

Apple's patent application was originally filed in Q2 2011 by inventors John Louch and Alessandro Sabatelli and published today by the US Patent and Trademark Office. A secondary patent associated with this one could be found under patent application 20120185789 titled "Target Region for Removing Icons from the Dock."

In a secondary Patent Application published today by the US Patent and Trademark Office titled "Information Management with Non-Hierarchical Views" we see that Apple is thinking of tweaking the OS X Finder.

Apple's Patent Abstract states that "Information items in a file system are arranged into groups that are created according to a grouping component. A non-hierarchical view displays visual representations (e.g., icons, thumbnail images) of the information items arranged in visually delineated groups according to an arrange type that can be specified for each group. Various view formats are available including icon, list and column view formats. In each view format, a condensed mode can be selected for one or more groups, resulting in multiple visual representations of items being displayed in a fixed amount of screen space in the non-hierarchical view. In icon view, each condensed group includes a single row of visual representations that can be navigated separately from other groups in the non-hierarchical view." 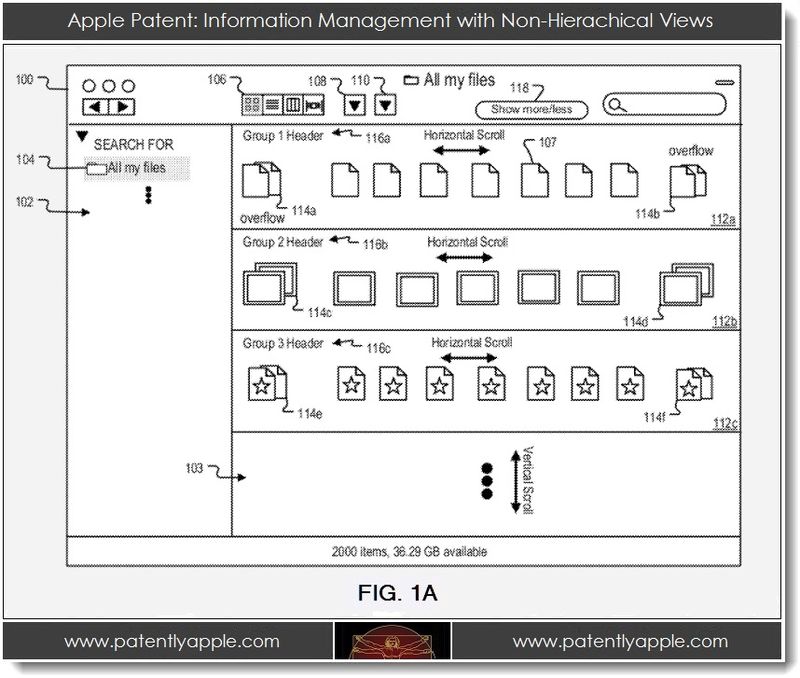