Today, the US Patent & Trademark Office granted Apple a patent relating to an all-new iWallet Credit System Architecture. It's a surprising patent win for Apple considering that it was an acquired patent from two inventors in Finland and originally published in Great Britain. Apple refilled it in March 2011. The new credit system architecture is a separate wing of Apple's originating iWallet architecture and deals with a subsidization program that works with sponsors and advertisers. If a consumer doesn't chose a subsidized iPhone, then the credits earned for working with advertisers and sponsors could be used to purchase Apple products and/or services. Last week we learned that Research in Motion's BlackBerry will be the first smartphone in Canada to offer consumers a viable mobile wallet system this fall. With that aggressive schedule in play, you have to wonder how far behind Apple's iWallet really is now.

Apple's invention is directed at least in part to a method and system for providing credits, vouchers or coupons representative of monetary value to users of iOS devices for the purpose of purchasing goods and services.

We begin with an overview of system 10 of the credit deliver system architecture noted in patent FIG. 1 below. The system may be implemented to provide credits having monetary value to mobile devices arranged to use a communications network such as GSM, WCDMA, CDMA, LTE WiMax and broadcasting over DVB-H, ISDB-T and DMB. In one case, users may be required to view advertisements in exchange for credits. 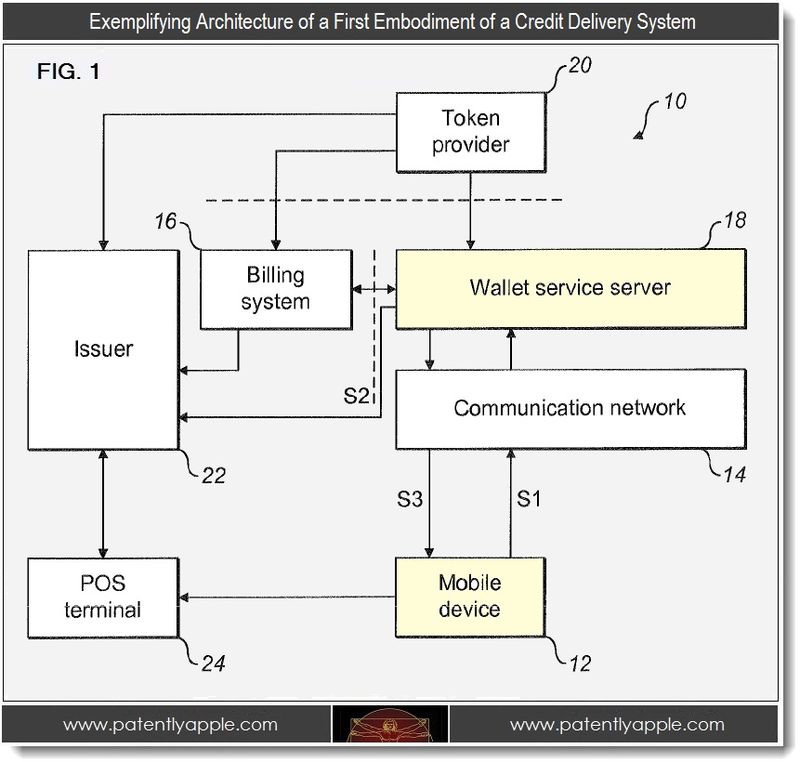 A sponsor may also be a party which wants to sponsor some specific payments to users of mobile devices. Each sponsor is provided with access to the billing system and the wallet service server. The billing system would manage the payments from each sponsor for whatever credits or services they have sponsored. 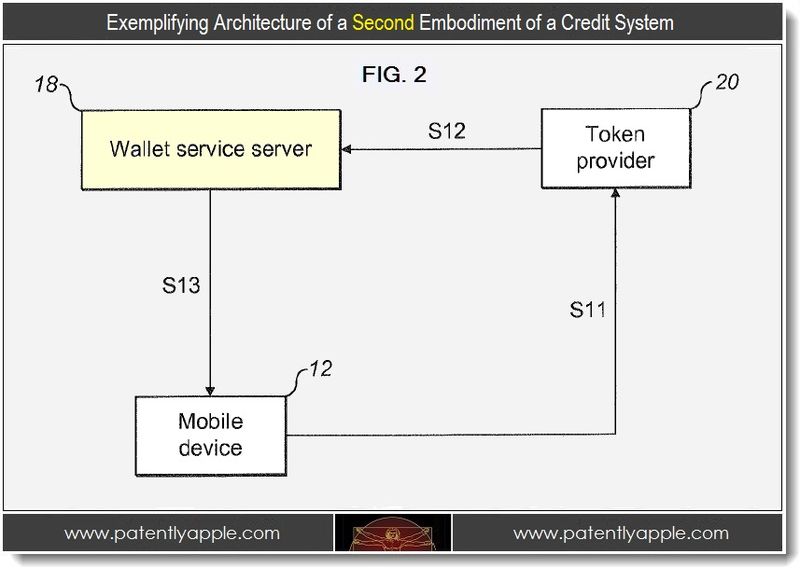 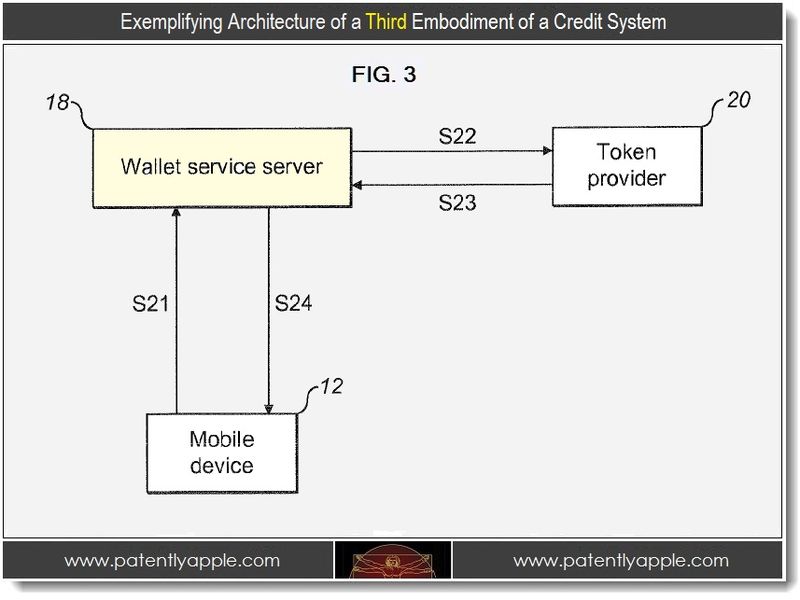 Although the iWallet service described in Apple's patent is mainly focused on a credit system associated with an advertisement system such as iAd, the fact is that patent claim 2 states the following: "The system of claim 1, wherein the billing device comprises one of a billing system, a bank, or a credit card company." So there is a direct connection between Apple's future iWallet credit delivery system and banks and/or credit card companies.

Apple's newly granted patent was originally filed in Great Britain by inventors Janne Aaltonen and Sami Saru of Turku Finland in 2007. Apple acquired the patent and refilled it under Apple with US Patent and Trademark Office in March 2011.

Due to the fact that today's granted patent is in fact an acquired patent, it's very difficult to ascertain which aspects of this invention interested Apple. More importantly, we're in the dark as to which aspects of the invention Apple may implement. Therefore we only covered the basics of this credit system architecture patent so as to not get too ahead on how Apple will play this out.

Case in point: the invention describes prepaid phone systems which may have made sense in 2007 but may have no bearing today – especially for the iPhone. So on that point, Apple may execute an alternative plan for implementing a subsidization program which is briefly touched on in this patent but which was covered in depth in our 2009 report titled "Apple Prepares to Rock the Market with Hardware Subsidizing Program." Subsidization is totally in line with Apple's previous patent.

In March we posted a report titled "Apple Wins Patent Relating to Nano SIM and iWallet Chip" which discussed how future iDevices could contain both SIM and ICC cards in a single tray. And this week we learned that Apple's SIM card design was chosen by the European Telecommunications Standards Institute. So slowly but surely the pieces of Apple's future iWallet are coming together.

Today's granted patent is squarely about adding a unique credit delivery system architecture to Apple's future iWallet. This system will in some cases help to subsidize future iPhones or assist non-subsidized program users with the ability to accumulating credits that could be cashed in for purchases such as iBooks, iTunes or other products available from Apple, Amazon or other online retailers.

In the big picture, the mobile wallet will play a huge part in the electronic payment ecosystem alongside single credit and debit cards. However, how it will eventually play out for Apple's iWallet remains to be seen. Will Apple's iWallet simply facilitate bank cards via a bank-ICC card in a dual tray alongside a nano-SIM? It's starting to look that way.

The move to push the mobile wallet into the marketplace was advanced last week with announcements that mobile payments were coming to Canada by the end of this year. The wireless carrier Rogers Communications and the Canadian Imperial Bank have teamed up to launch a "mobile wallet" that puts credit card credentials onto smartphones.

The article stated that "Canada's banking industry on Monday published a blueprint to support open standards for secure transactions using near field communications (NFC) chips that are available in a growing number of the latest smartphones." This is a technology that many of Apple's iWallet patents support.

The Calgary Herald report went on to state that "The existing readers that currently used with fast food outlets, gasoline stations, grocery and convenience stores and coffee shops work with existing credit and debit cards that emit similar signals. NFC chips are considered a safer alternative to traditional magnetic strips, which are more easily hacked."

Apple's noted patent that discussed incorporating an ICC bank card into a SIM-like card may be one of the ways that this will all play out. In that scenario, consumers would get to choose which carrier SIM Card and which ICC banking SIM-like Card to put into their future iPhone or iPad LTE at the time of purchase. 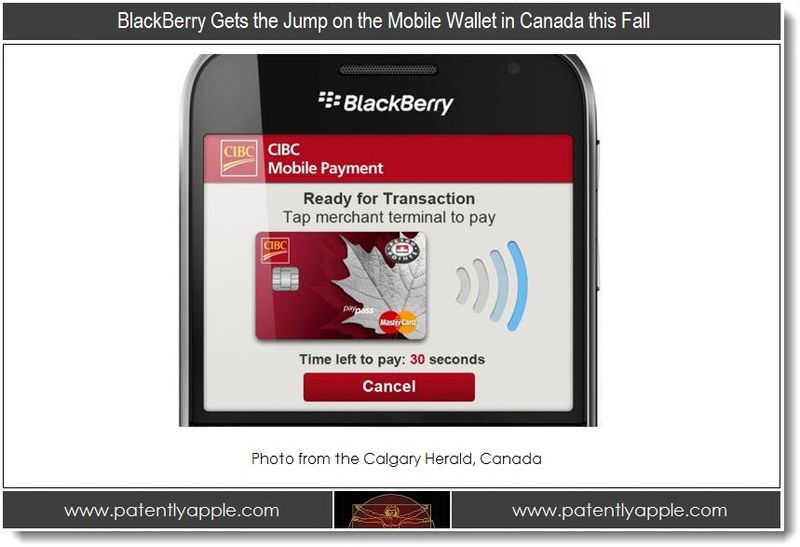 However it plays out, Research in Motion's BlackBerry is going to be the first smartphone in Canada to introduce the mobile wallet program and I'm sure that Apple is going to make sure that they comply with whatever standards needed in order to compete. The only thing in question is the timing of the iWallet.

In today's granted patent, we're able to see that Apple is working on a parallel Credit Delivery System Architecture that will be implemented under the iWallet umbrella of financial services.