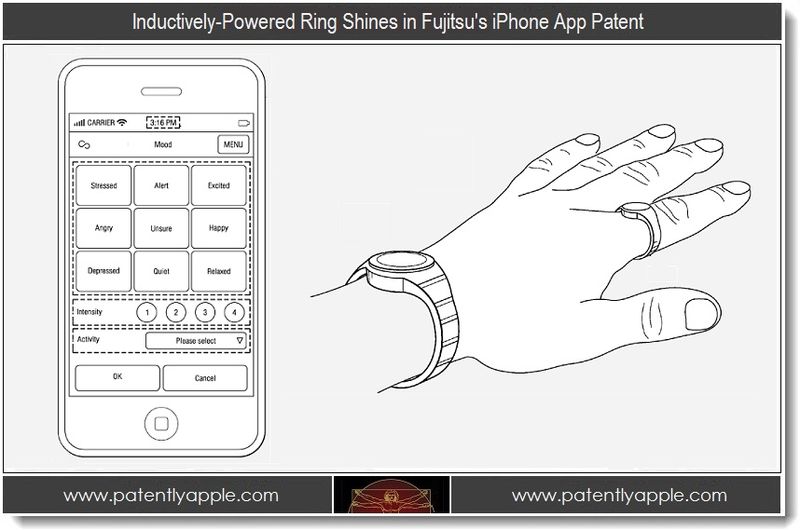 In May we reported on Fujitsu developing an in-vehicle navigation system that will use Apple's iPhone. Today we're reporting on a wild inductively-powered ring that works in conjunction with Fujitsu's developing sensor network system; A system that ties into a new application that is being designed for Apple's iPhone. If you thought that the iPhone only ran tiny commercial apps and games, think again. This system is mind boggling and covers many possible applications including healthcare monitoring of patients, environmental and habitat monitoring, military and homeland security surveillance and more. Due to the fact that this is a Fujitsu patent application, our report only provides you with a basic overview of this new system.

A sensor typically measures a physical quantity and converts it into a signal that an observer or an instrument could read. For example, a mercury-in-glass thermometer converts a measured temperature into expansion and contraction of a liquid that could be read on a calibrated glass tube. A thermocouple converts temperature to an output voltage that a voltmeter could read. For accuracy, sensors are generally calibrated against known standards. This is an elementary example of how sensors could sense the tiniest of measurement changes. The next generation of sensors will go far beyond the old thermometer.

Fujitsu's introduces us to an example sensor network (100) in patent FIG. 1 below. The sensor network comprises of a sensor array (110), an analysis system (180), and a display system (190). The components of the sensor network are connected to each. The sensor network enables the collecting, processing, sharing, and visualizing, displaying, archiving, and searching of sensor data. It's also used to undertake a variety of tasks, such as physiological, psychological, behavioral, and environmental monitoring and analysis.

The sensor network embodiments disclosed in Fujitsu invention have many possible applications, such as healthcare monitoring of patients, environmental and habitat monitoring, weather monitoring and forecasting, military and homeland security surveillance, tracking of goods and manufacturing processes, safety monitoring of physical structures, and many other uses. 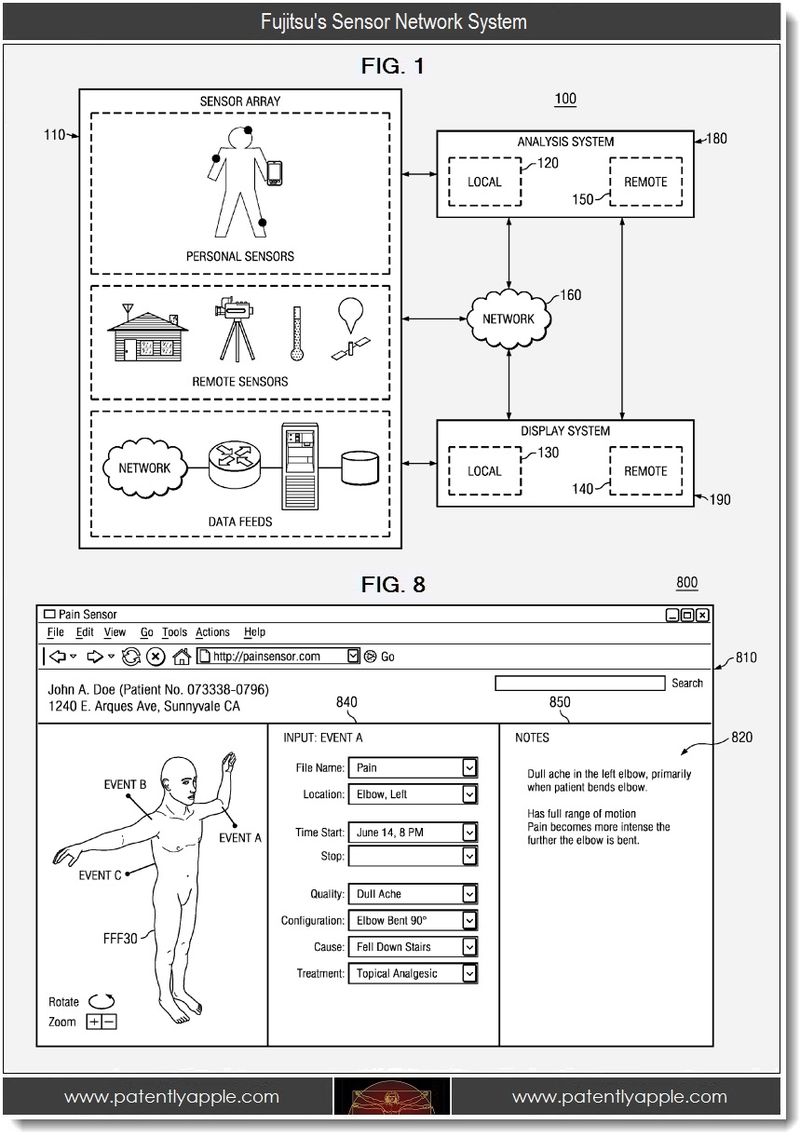 In Fujitsu's patent FIG. 8 noted above we see an example user-input sensor for collecting information of a physiological event on a three-dimensional representation of a person's body related to pain.

Sensors are able to measure a variety of things, including physiological, psychological, behavioral, and environmental stimulus as further noted below.

Psychological stimulus may include, for example, emotion, mood, feeling, anxiety, stress, depression, and other psychological or mental states of a person.

Fujitsu's listed range of possible sensor types that could be encompassed by various embodiments of their invention is simply mind boggling. They list in access of 300 types of sensors including a DNA microarray to an EKG to an Arterial blood gas sensor to a fiber optic sensor to a ring laser gyroscope to wired gloves right on through to zinc oxide nanorod sensors.

In Fujitsu's patent FIG. 4 we're able to see an example sensor for collecting mood and activity information from a person on Apple's iPhone. This "mood sensor" (400) is a type of user-input sensor, that my receive input (i.e., stimulus) from a user regarding the user's psychological state and the user's behavior corresponding to that psychological state. 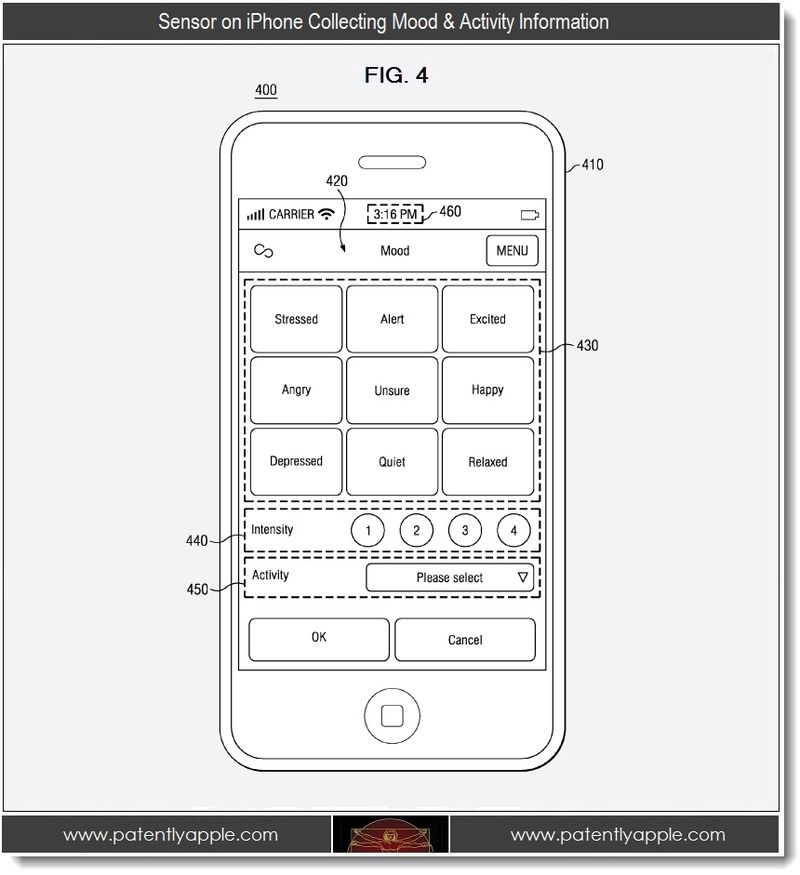 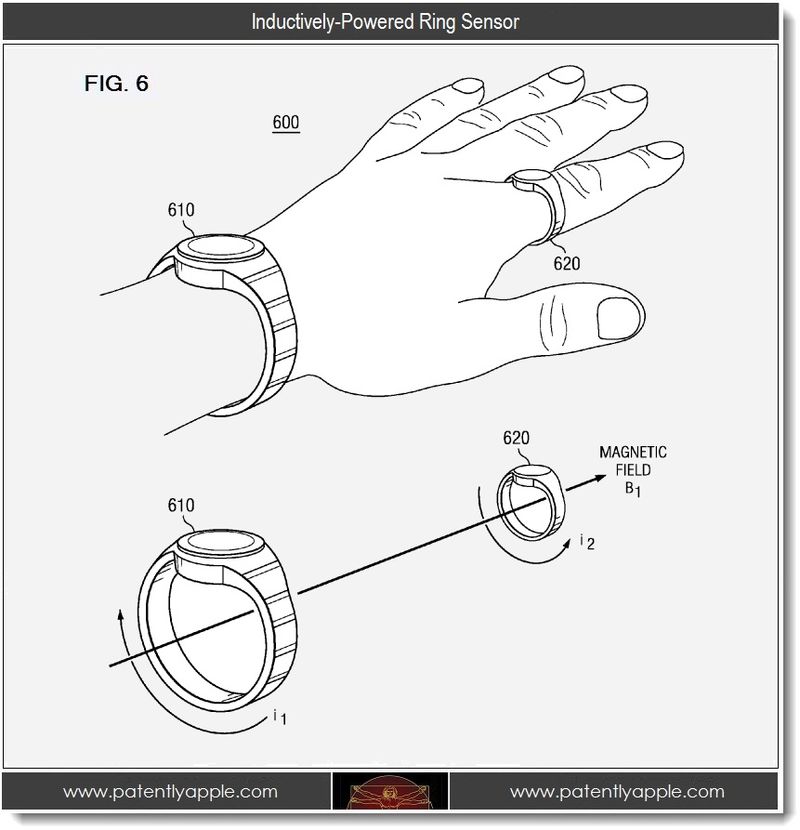 In particular embodiments, Fujitsu states that the ring element may include one or more types of sensors. For example, the ring element may include a pulse oximeter, a heart-rate monitor, a CO-oximeter, a galvanic-skin-response sensor, an electrocargiograph, a respirometer or two or more such sensors. As noted earlier, Fujitsu lists more than 300 types of sensors that could be used with this system and so the combination of any two is almost endless.

Fujitsu's patent figures shown below cover a wide variety of medical related applications that could be used with their Inductively-Powered Ring Sensor System that includes the iPhone. 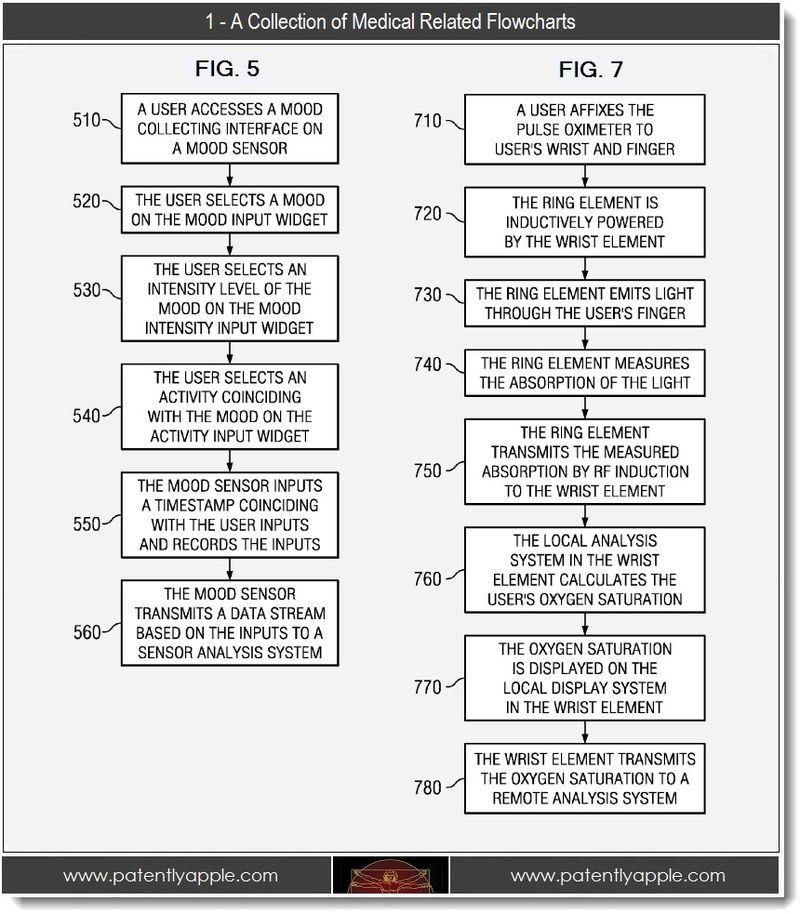 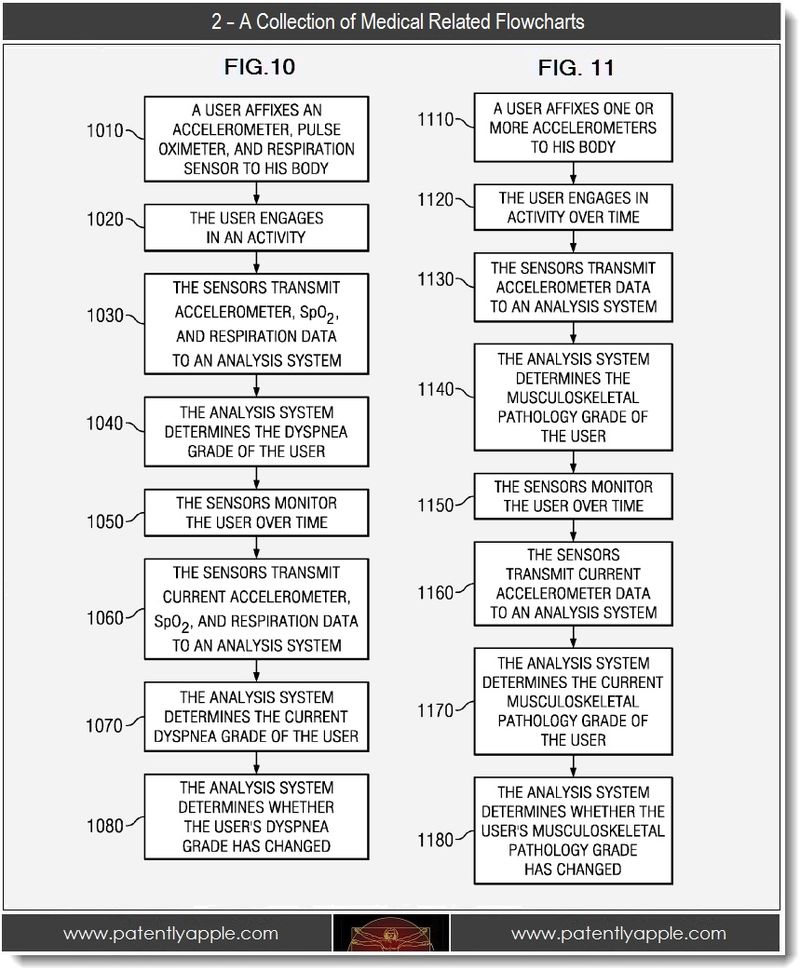 Fujitsu's new patent focuses a huge portion of their invention to all things medical which happens to be an area that Apple's iOS is gaining tremendous ground in. This could be a very important application for consumers wishing to monitor their health in the coming years.

Fujitsu's patent application was originally filed in Q4 2010 and published by the US Patent and Trademark Office in Q2 2012.