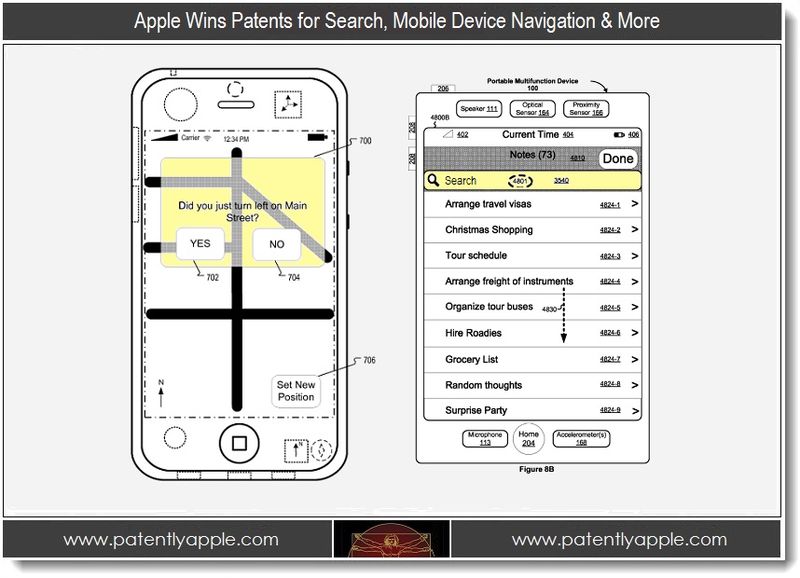 The US Patent and Trademark Office officially published a series of 16 newly granted patents for Apple Inc. today. In our first report posted this morning we covered a major patent relating to an Anti-Big Brother surveillance patent. In our second report we mainly cover two of Apple's granted patents. The first relates to methods and iOS user interfaces for on-device search functionality. The second relates to mobile device aided navigation technology. The latter represents Apple's humble beginnings into what has become turn-by-turn functionality that is coming to iOS 6 natively later this year. To top off our report, we cover a few industrial design wins for Apple and provide you with a list of ten additional patents in our final wrap up section for your review.

Apple has received a Granted Patent that generally relates to mobile device aided navigation. In fact, this is one of Apple's initial patents relating to use of the iPhone for vehicle turn based information. Considering that Apple is building turn-by-turn navigation into their iOS 6 Map + Compass application, the timing of this win is noteworthy. 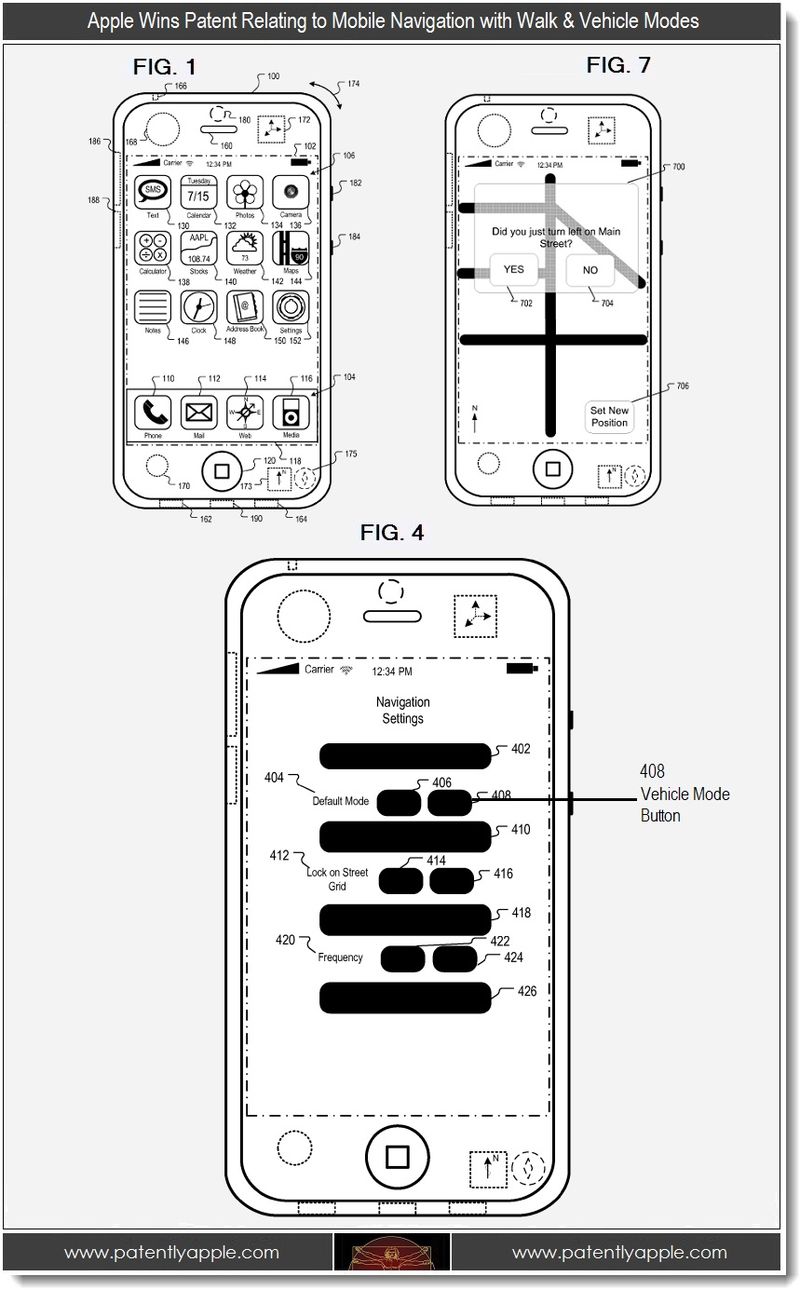 In Apple's patent FIG. 4 noted above we see a block diagram of an example navigation settings screen 400 of the mobile device of FIG. 1. A user selectable touch-sensitive display button 402 to toggle dead reckoning functions on or off is shown in an enabled state. Touching the button toggles to a disabled state and changes its appearance to a lighter or "grayed out" appearance. A default mode selection 404 is shown. The "vehicle mode" button 408 is shown in an enabled state to indicate that when dead reckoning functions are active the default dead reckoning mode is the vehicle mode. A touch of the "walking mode" button 406 in the state shown would cause a walking mode to become enabled, which, in turn, causes the "vehicle mode" button 408 to toggle to the disabled representation. The word "vehicle" is listed 31 times in Apple's patent and adjoining references.

Part of Apple's first patent claim: A computer-implemented method, comprising: storing a position in memory; receiving sensor data related to movement of a device; detecting a turn in the movement of the device based on the received sensor data;

Apple credits Senior VP of iPhone Software Scott Forstall and team members Gregory Christie, Robert Borchers and Kevin Tiene as the inventors of granted patent 8,204,684 which was originally filed in Q1 2008 and published today by the US Patent and Trademark Office. 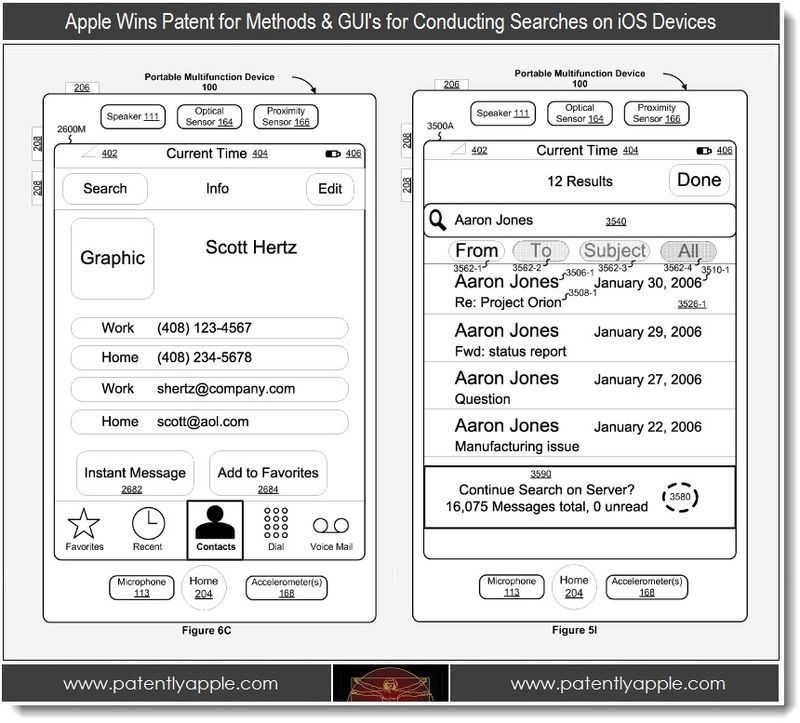 Apple credits Senior VP of iPhone Software Scott Forstall and team members Marcel Van Os, Stephen Lemay, Paul Marcos and Alexandre Aybes as the inventors of granted patent 8,205,157 which was originally filed in Q3 2008 and published today by the US Patent and Trademark Office. 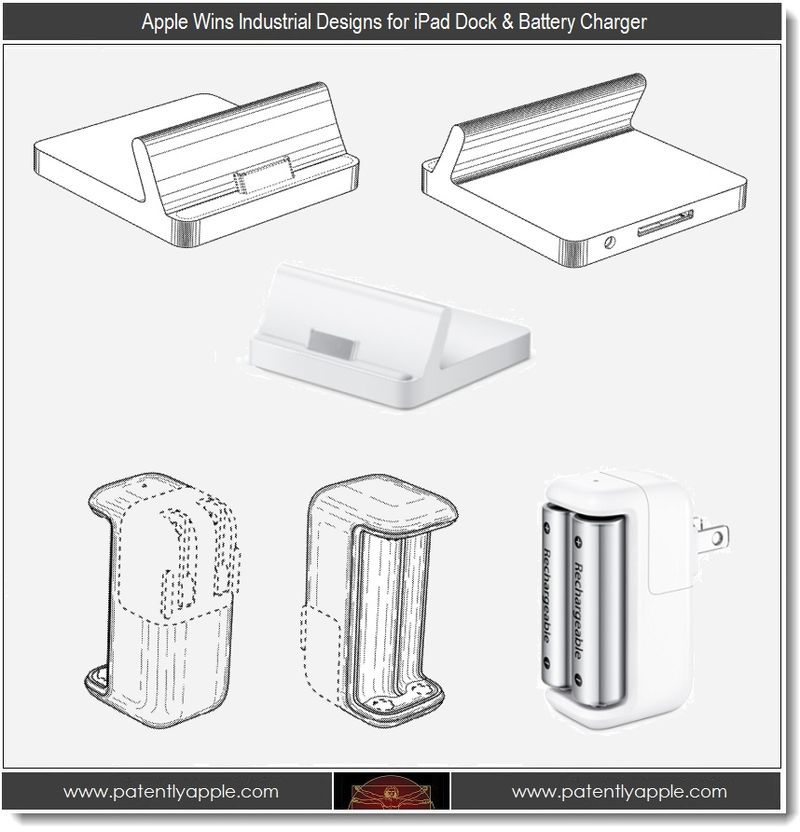 Apple has been granted industrial design wins for their iPad Dock and Battery Charger.

8,205,081 Systems and methods for verifying the authenticity of a remote device

8,204,860 Methods and systems for snapshot reconstitution

VIZIO's New iMac-Like Desktop: For Macites Who Live in a dual Mac-PC Environment 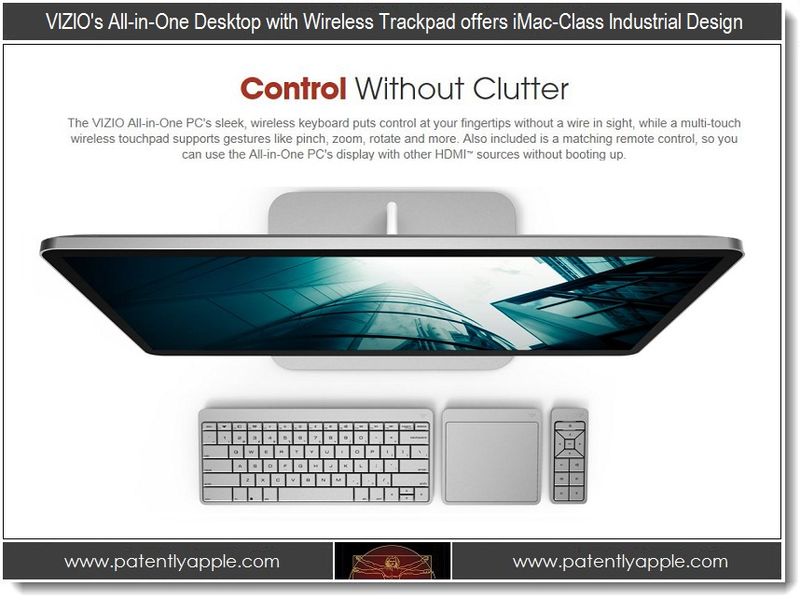 Macites who own both Macs and PCs for work or play know all too well that Apple's iMac is the ultimate industrial designed desktop on the market. On Friday, out of nowhere, walks in VZIO with a new all-in-one desktop computer design with a wireless keyboard and Magic Pad-like touchpad + remote. They also have new Ultrabooks with large 14 and 15.6" HD displays that are worth checking out if you have a moment.