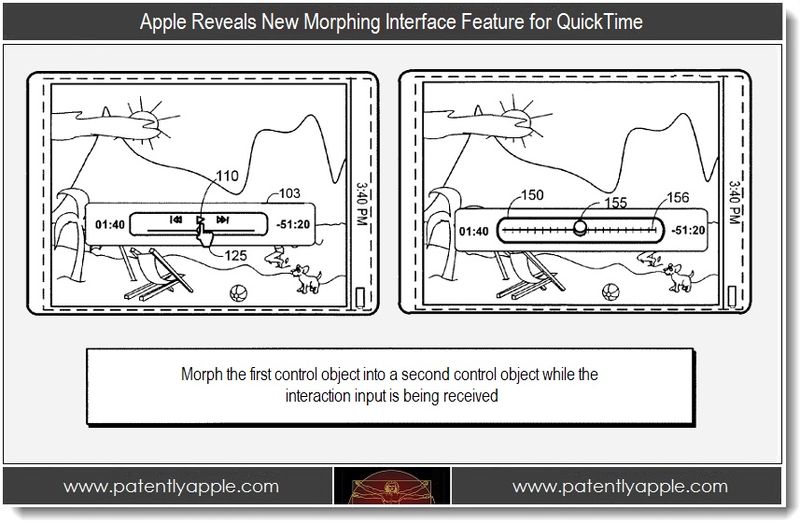 On June 7, 2012, the US Patent & Trademark Office published a patent application from Apple that reveals their work on possible new QuickTime interface controls. The new controls will allow users to set a speed of playback which will provide users with superior playback accuracy. The new controls temporarily replace the traditional timeline scrubber. When the user taps on the scrubber, the interface will begin to morph and pop-out in 3D fashion to reveal the new interface controls. It's a practical idea delivered in an interface that only Apple could dream up.

New QuickTime Controls in the Works

Apple's invention generally relates to systems and techniques for morphing a first control object in QuickTime's user-interface into a second type of control object. 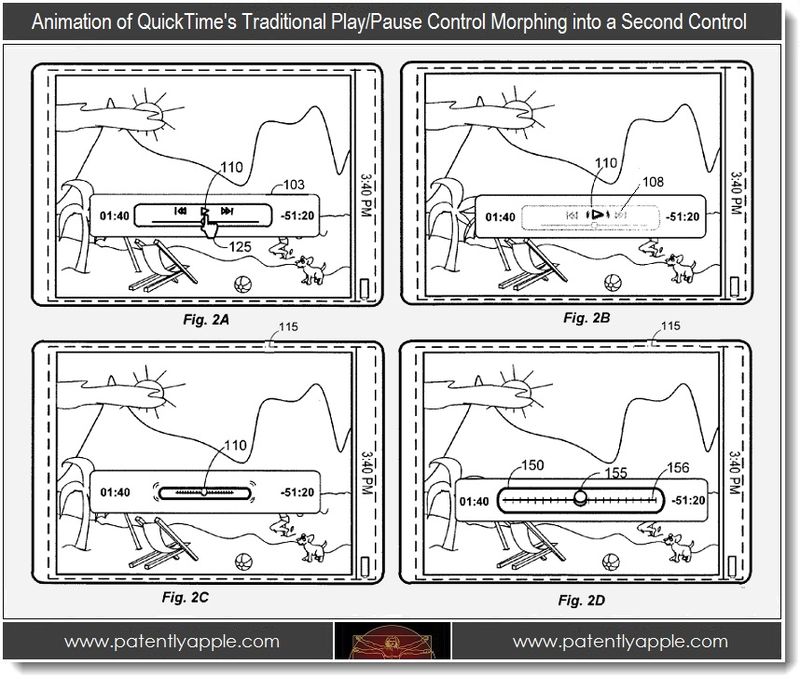 Morphing into a 3D Play Button

According to Apple, to initiate the morphing process of one control to another, the user will begin with a "press-and-release" action. In FIG. 2A we see a new pointer in the form of a hand (#125). As the hand-pointer is pressed, and before being released, the control object could begin morphing from a traditional play button (that's flush with the control panel #103 of FIG. 2A) into a 3-dimensional play button, appearing to rise up from the control panel. As the pointer continues to be pressed and not released, the control object could continue to morph by way of animation and the control objects in the traditional QuickTime control panel could begin to disappear, as shown in FIG. 2B. For whatever reason, Apple chose to not provide a patent figure illustrating the pop-out 3D effect. But I'm sure you could imagine what that would look like.

It should be noted that the "hand" pointer noted in the patent figures are in context with use on a Mac. Those with iOS devices will simply use tap controls.

In Apple's patent FIGS. 4A to 4D shown below we're able to see a value of the control object 150 being adjusted based on user input. When the slider 155 is at neutral position (as shown in position #163 of FIG. 4A), the media presentation plays at a rate of zero frames per second (i.e. stopped). As the slider is moved from neutral position toward the right end 161 by a user moving pointer 125, the presentation is played forward at a rate defined by the slider's location along slider rail 156. From FIGS 4A to 4D you could see that the rate could range from 0.5X through to 8X. 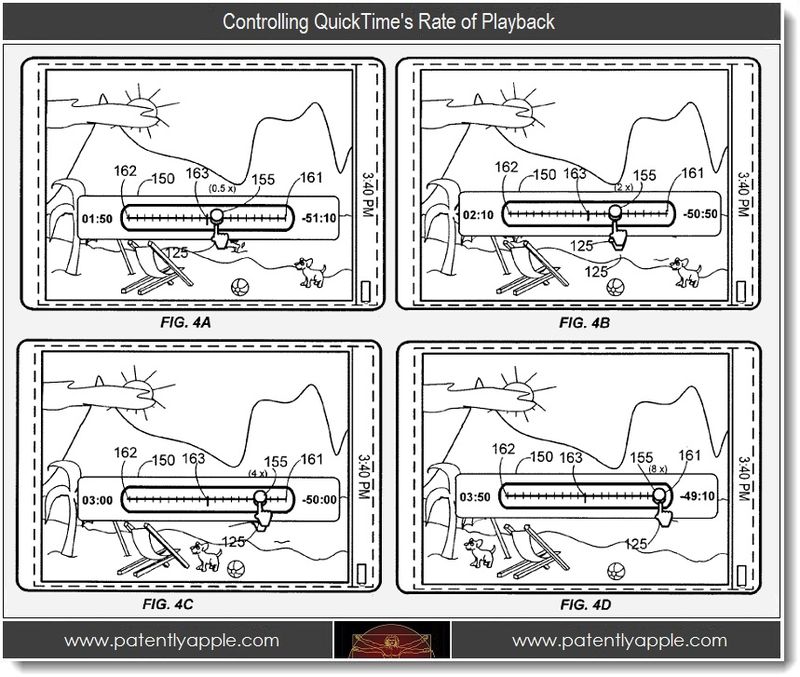 The advantage of controlling the rate of speed relating to QuickTime's playback is to provide a user with the ability to locate a position in the presentation with vastly superior accurately. 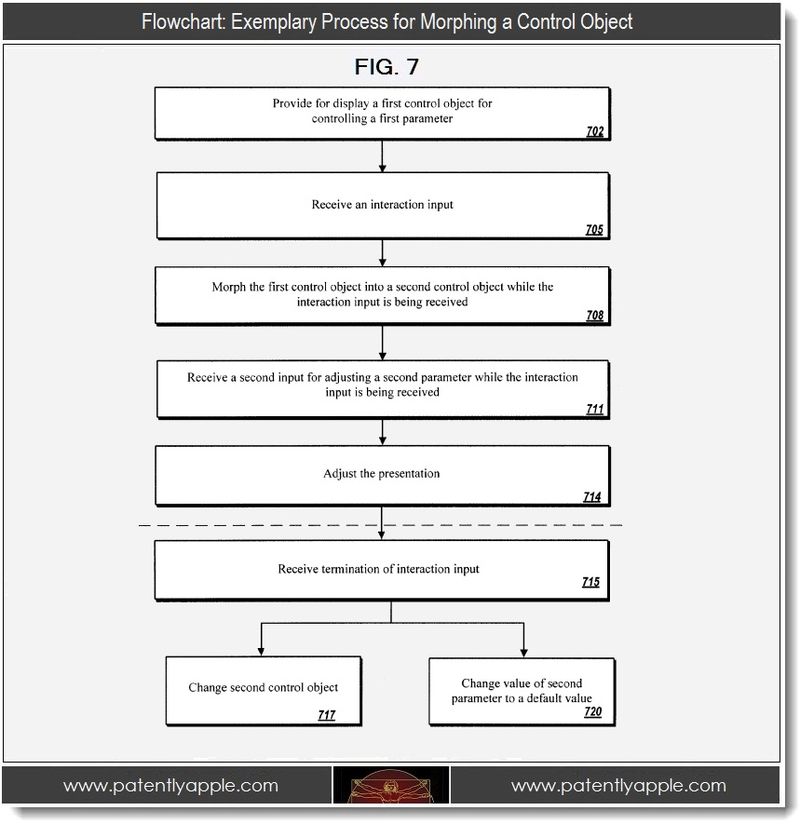 While today's patent may not be a stunning new concept, it could definitely end up being very practical for many users. Unfortunately, Apple patent application doesn't provide us with any practical real-world scenarios – though in many ways it's self-explanatory.

If you've ever tried to transcribe a portion of an Apple keynote, then you're fully aware that attempting to go back a few seconds to catch a single word that you missed is close to impossible. With Apple's new controls, that might be a problem of the past. For those analyzing a sporting event or a particular play in a game, then being able to control the speed of playback may be exactly what the doctor ordered.

The dramatic drop in patent application activity could be a sign that Apple is shifting gears and preparing a new road map for the next decade. On the other hand it could be anything from an abnormal lull right through to the company feeling rudderless without Steve Jobs' direction. Time will tell which it is, but the drop off in IP activity is definitely worth noting.

With that said, the only other new patent application published today is titled "Using a Battery Pack to Facilitate Thermal Transfer in a Portable Device." 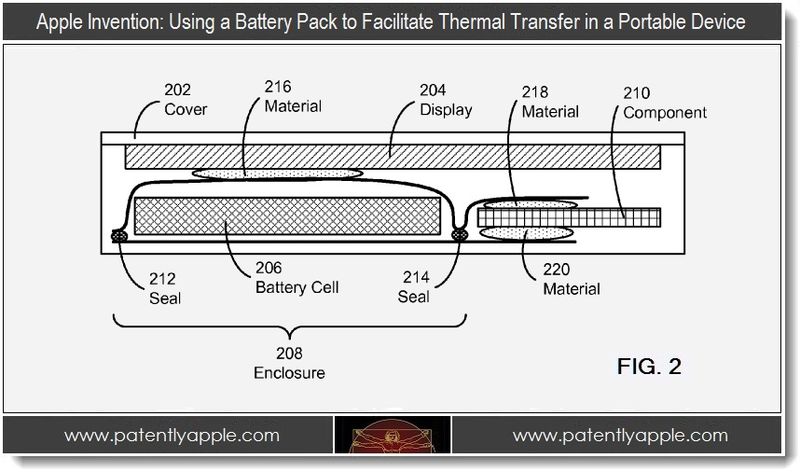 For those wishing to explore this invention further, please see patent application 20120140419.

In addition to the two patent applications presented in today's report, the US Patent and Trademark Office did publish a series of older continuation patents dating back to between 2003 and 2011. Most of the time continuation patents are simply about tweaking patent claims in an attempt to get their patents granted.

Continuation Patent 20120140917 titled "Active Noise Cancellation Decisions using a Degraded Reference," dates back to 2010. You could read up on this patent application that briefly covered in December 2011.

@ Hatim. Yes of course you could move the scrubber back and forth. Just not in a deadly accurate manner. If you need to go back 3 seconds, you can't do that consistently on the standard QuickTime Player. Secondly, the design is to morph into a new 3D tool that will provide us with deadly accurate time movement. It's a different design and concept, Hatim.

I think that this feature is already on QuickTime for some time now. You just hold the "Play" button and then drag to the speed of your liking.

While I use Apple products exclusively, Quicktime really does suck. Apple needs to spend more time with native codecs and keeping Quicktime itself from crashing before adding "features".