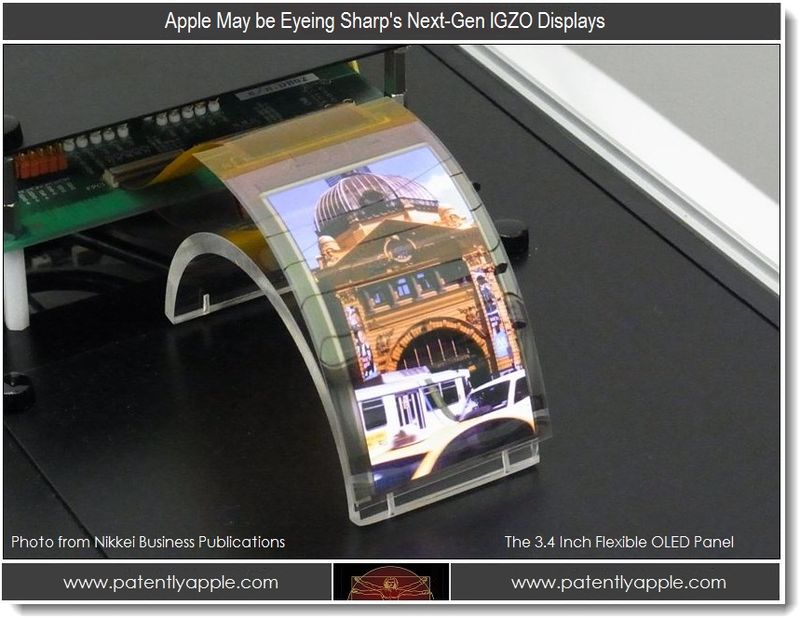 Last December we first reported on Apple's possible switch from IPS to Sharp's IGZO displays for future portables and a possible HDTV. In March we followed up with a report titled "The Foxconn-Sharp Alliance is all about Apple's Coming HDTV." Today we take a brief look at a new report from Japan's Nikkei BP that discusses a new twist coming to Sharp's next generation of IGZO displays that range in size from 3.4 to 13.5 inches. With Sharp being one of Apple's iPad display suppliers, any new development is worth noting. One of the designs coming to market is a 3.4 flexible display that's illustrated in our cover graphic. Could we see any of these next-gen IGZO displays working into Apple's roadmap? Only time will tell.

According to Japan's Nikkei BP, Sharp Corp and Semiconductor Energy Laboratory announced on June 1, 2012, that they had developed an IGZO-based TFT having properties improved by adding crystallinity.

The companies expect that the TFT will be used as driver elements of LCD and OLED panels that could be used in future smartphones, tablets and other products requiring higher resolutions. Sharp plans to start volume production of an LCD panel using the new IGZO TFT within fiscal 2012.

During June's press conference, Sharp's spokesman stated that "We have established a technology to mass-produce an LCD panel with a resolution of up to 500ppi with no problem." Sharp showed off LCD and OLED panels that use the newly-developed IGZO TFT. It showcased a 4.9-inch LCD panel whose pixel count and resolution are 1,280 x 720 and 302ppi and a 6.1-inch LCD panel with a pixel count of 2,560 x 1,600 and 498ppi.

As for the OLED panels, Sharp showed 13.5- and 3.4-inch panels whose pixel counts are 3,840 x 2,160 and 960 x 540, respectively. Their resolutions are both 326ppi. Interestingly the 3.4-inch panel is flexible because it uses a resin substrate. For now, Sharp admitted that the OLED panels are just prototypes.

Considering that Sharp is a current iPad display supplier, it's very likely that Apple will take advantage of these next generation displays at some point in the future. The one display that may be of interest to most is the flex display – due to its futuristic design potential. Many tech companies such as Samsung, RIM and Microsoft have already applied for patents regarding flex displays of one sort or another.

Although Apple has listed flex displays as a viable option in their patent applications, they've done so in a manner of not limiting their future options. A patent targeting a product specifically using flex displays has yet to surface.

For now at least, it looks like Tim Cook has yet more options to keep Apple's iPad "Resolution" alive for many years to come.