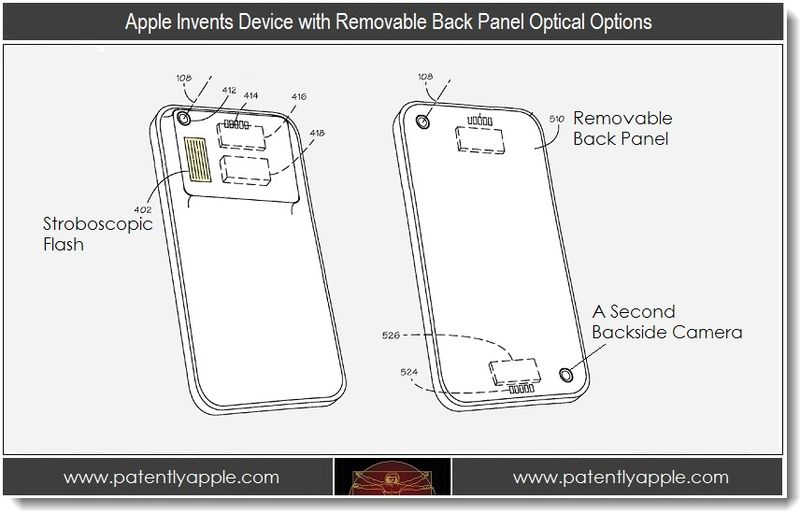 On June 14, 2012, the US Patent & Trademark Office published a patent application from Apple that reveals one of their research projects involving a camera device that provides the user with configurable optic options. The unique aspect to this is the device's removable back panel. Although Apple's patent background mentions a mobile phone, their actual summary and patent detailing mention nothing of a phone in any traditional way. So the device could either represent a next generation iPod touch as a means of differentiating it from the iPhone or a standalone camera that Apple has been playing with since 2009. While Apple has toyed with the idea of adding various lenses to handhelds via an external accessory in the past, their concepts were never in-line with Apple's great design ethic. Today's design seems to properly address the need for better portable device optical options while retaining an Apple-like form factor. The only real question remaining is this: Is Apple designing this removable back panel design as part of a standalone camera or as part of the iPod touch's reinvention. Which do you think it'll be?

The Limitation of Today's iDevice Cameras

As the quality of digital images that could be obtained with highly compact devices increases, there is increasing demand for sophisticated features previously found only in high-end digital cameras, such as digital single lens reflex (DSLR) cameras. Cameras providing features such as supplementary lenses and filters, optical zoom, optical image stabilization, and other features useful in capturing high quality images have typically been much larger than multifunction devices that include a camera.

High-end digital cameras may be constructed with a camera body that provides a mechanical receptacle for receiving a variety of lenses and aligning them precisely with the image sensor in the camera body. These replaceable lenses and non-replaceable lenses on other digital cameras may provide a lens and filter mount at the front of the lens that could receive a lens or filter that is connected directly to the lens, thus ensuring a precise optical alignment with the lens.

Therefore it is necessary to offer a number of different models of a compact device if a range of camera features is to be offered. Further, the camera features of a model are limited to what could be provided with a single optical configuration.

It would be desirable to provide a structure for a compact device that allows the end user to reconfigure the optical arrangement of the device while retaining the benefits of assembling the device using a pre-assembled digital imaging subsystem.

Apple's Solution: A Device with a Removable Back Panel with Optical Options 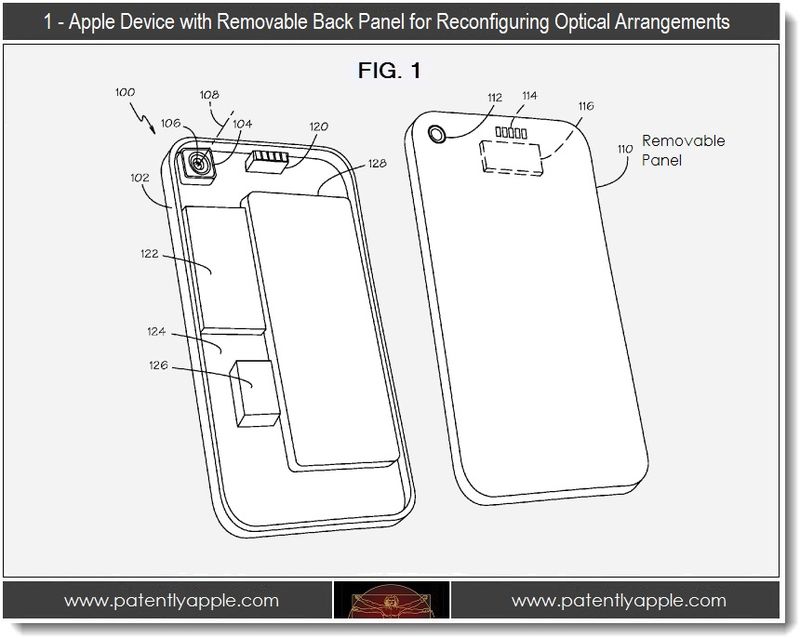 In Apple's patent FIG. 1 noted above we're able to see is a simplified block diagram of a device with a camera. A case 102 encloses and supports a digital imaging subsystem 104 in a first defined positional relationship to the case. 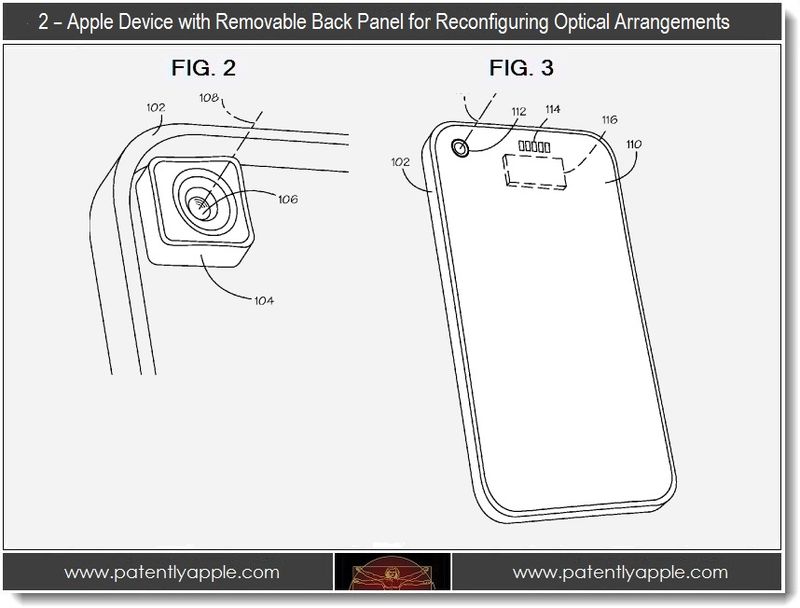 In another embodiment, Apple states that the optical component supported by the removable panel is a close up lens that reduces the minimum focal distance of the digital imaging subsystem. This permits the camera to be used for extreme close-up photography.

In yet another embodiment, Apple states that the optical component supported by the removable panel is a lens baffle that reduces the transmission of extraneous light to the digital imaging subsystem. The lens baffle may be provided in combination with a supplementary lens that increases the focal length of the digital imaging subsystem and reduces the field of view. The lens baffle is closely matched to the reduced field of view so that light that is outside the field of view is not reflected onto the image sensor to degrade the acquired image.

As is shown in patent FIG. 4 below, the portable electronic device may include a stroboscopic flash 402 supported by the removable panel 410. The electrical component 416 is an interface that couples the stroboscopic flash to control signals from the electronic control system and power from the power supply through an electrical connector 414 that is coupled to a corresponding electrical connector in the case. The removable panel may support an auxiliary power supply 418, such as a capacitor or a battery, to provide additional power for the stroboscopic flash. As shown, some embodiments may use a removable panel that extends from the case over part or the entire panel to provide space for bulky components or to support the optical component at a greater distance from the digital imaging subsystem. 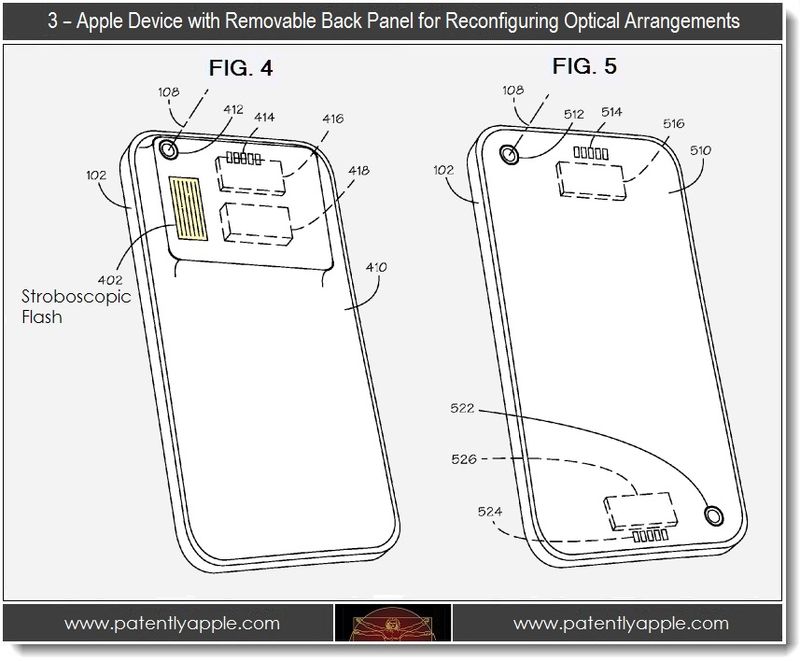 As shown in patent FIG. 5 above, the portable electronic device may provide a removable panel that could be selectively held by the case in either of two defined positional relationship to the case. The removable panel may include two optical components 512, 522 each of which provides different optical characteristics of the digital imaging subsystem according to which of the two optical components is aligned with the optical axis.

Motion Sensor on the Removable Panel

May Include Better Zoom Capabilities

May Include Better Shutter Control

Another original patent application published today related to Flash Memory. Apple's Patent Application 20120151120 relates to systems and methods for handling non-volatile memory ("NVM") operating at a substantially full capacity. In particular, by providing a logical space for the NVM that is relatively larger than the physical capacity of the NVM, the system's performance could be increased even when the NVM is substantially full.

Another original patent application published today relates to Flash Memory. Apple's Patent Application 20120151120 relates to systems and methods for handling non-volatile memory ("NVM") operating at a substantially full capacity. In particular, by providing a logical space for the NVM that is relatively larger than the physical capacity of the NVM, the system's performance could be increased even when the NVM is substantially full.

For those interested in this patent, check out patent application 20120149308 which was originally filed in Q4 2010 by inventor Fletcher Rothkopf and published today by the US Patent and Trademark Office. 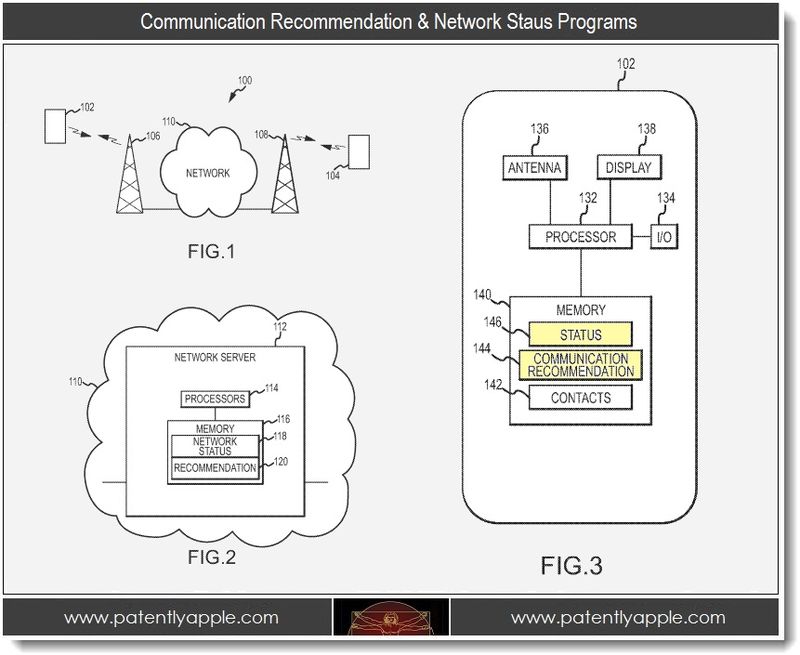 This continuation patent relating to the iMac's hinge was original filed in 2005 under the title "Flat Panel Display including a Hinge Assembly."

Samsung Invents the Next Generation of Stylus Pen