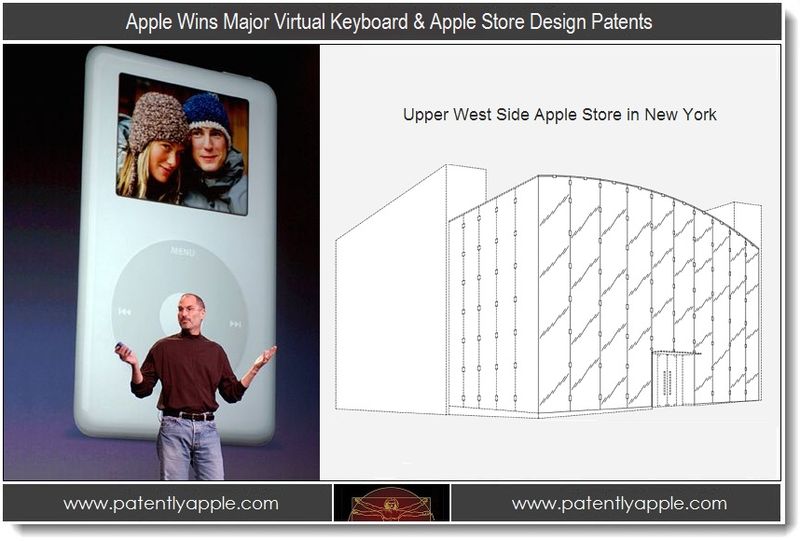 Apple was first granted a design patent for their Upper West Side Apple Store in New York back in November 2011. Six months later and the US Patent and Trademark Office have granted Apple their second design patent for this same design. Steve Jobs has once again been posthumously credited as one of the designers. In addition to this, it should be noted that Apple has been awarded twenty-one granted patents today. Beyond the thirteen utility patents that we list covering such things as security, podcast management and the MacBook's Hard Drive, this report covers a major virtual keyboard victory for Apple which just might be one that Apple could challenge their many copycatters with.

Apple Wins a Patent for their Multi-Tiered Virtual Keyboard

Apple has received a Granted Patent that relates to multi-tiered iOS virtual keyboards for Apple's iPhone and iPad. Apple specifically describes their invention as one relating to "user interfaces, and more particularly, to methods, systems, and graphical user interfaces for selecting a soft keyboard from a plurality of soft keyboards." 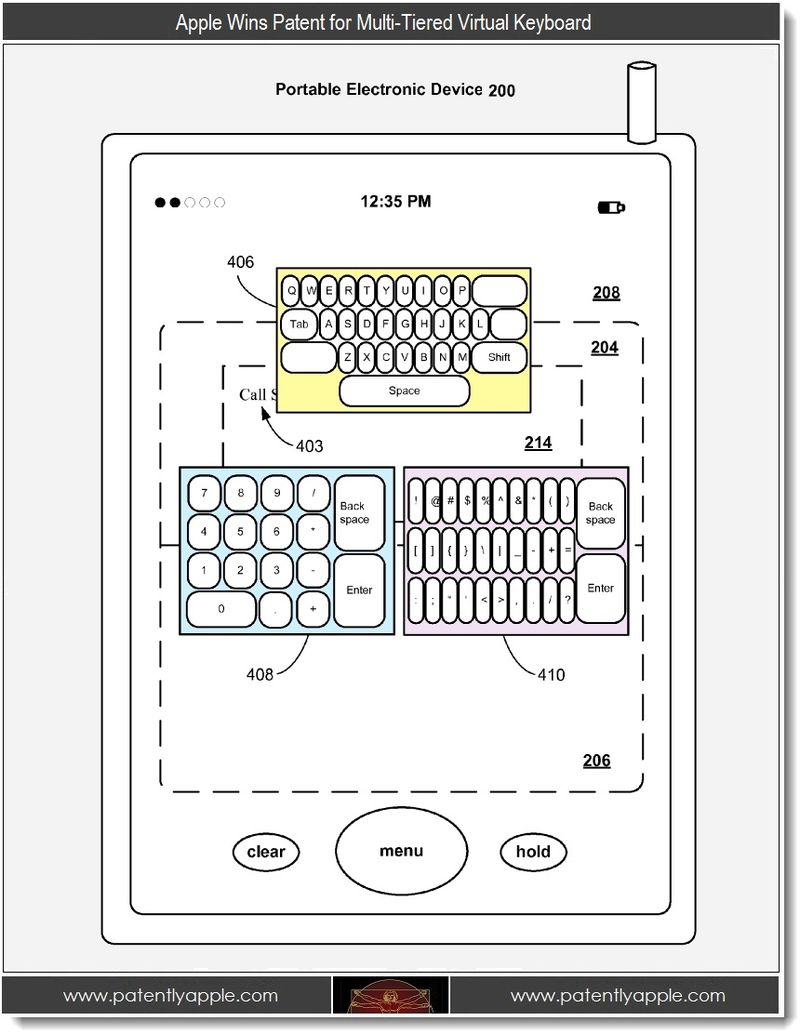 This is an interesting win for Apple. In 2006 when I originally covered Apple's coming virtual keyboards, many thought that this was a feature Apple would never, ever introduce. When Steve Jobs introduced the virtual keyboard with their 2007 iPhone, many said it wasn't going to be able to compete with RIM's BlackBerry keyboard that was so popular. And yet today, most smartphones and tablets offer such virtual keyboards.

The interesting question becomes, did Apple's competitors, in a rush to compete with Apple's iPhone, copy Apple's unique multi-tiered approach to virtual keyboards? Apple's virtual keyboard consists of a main keyboard, a numeric keyboard and one for symbols and added punctuation as noted in their patent figure above. Now that Apple legal has this in their arsenal, it'll be interesting to see if Apple challenges their competitors with this in court in the future. If they do, count on the ranters to only get louder.

Apple credits Kenneth Kocienda and Richard Williamson as the inventors of this patent which was last filed in Q3 2009 and originally filed in Q4 2006. It was made public today by the US Patent and Trademark Office.

Apple has received a Granted Patent for MagSafe, their proprietary magnetically-attached power connector used in MacBooks and their related power adapter. 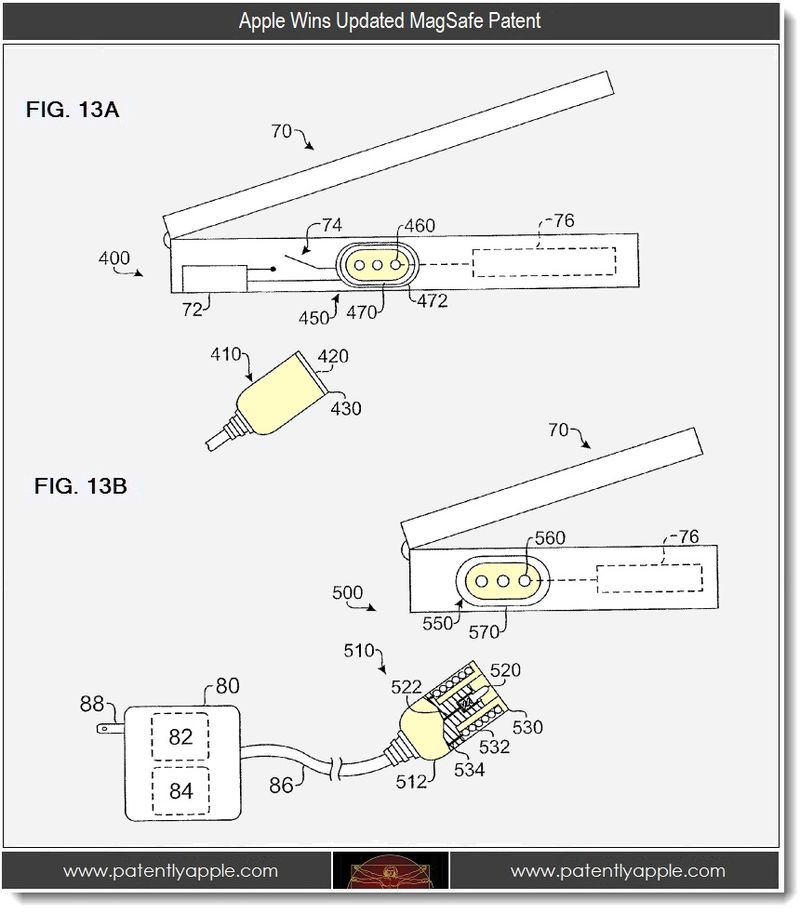 While Apple was just granted a patent for MagSafe in January of this year, it's apparent when comparing the two patents that Apple has overhauled their patent claims in addition to adding minor tweaks.

Apple has been granted four design patents today. The first is for the iPod nano's packaging (D659,530); the second is for the 2005-2006 iPod with color display model (D659,671); the third is for the iPod shuffle second generation (D659,712); and the fourth is for Apple's second design win for their Upper West Side Apple Store in New York that uses Hanger Glass which posthumously credits Steve Jobs. Apple filed a patent application in April for the New York Apple Store's Architectural Structure. 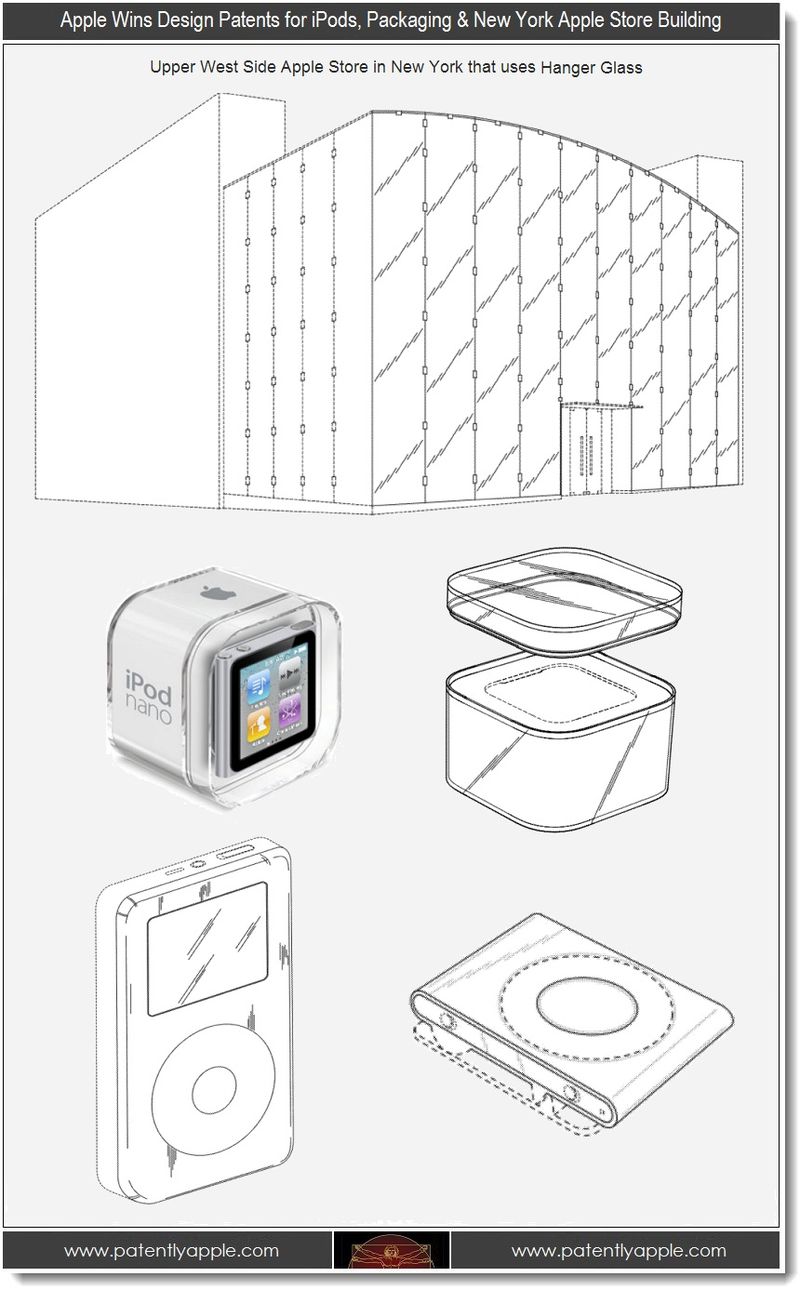 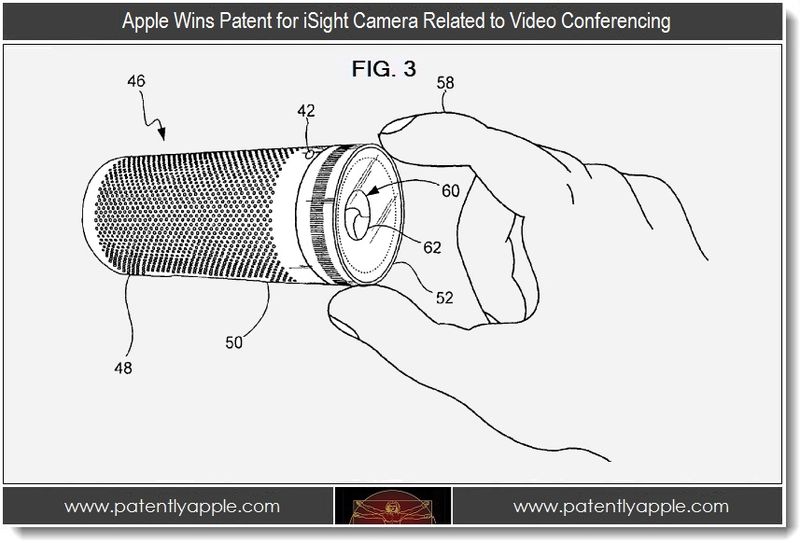 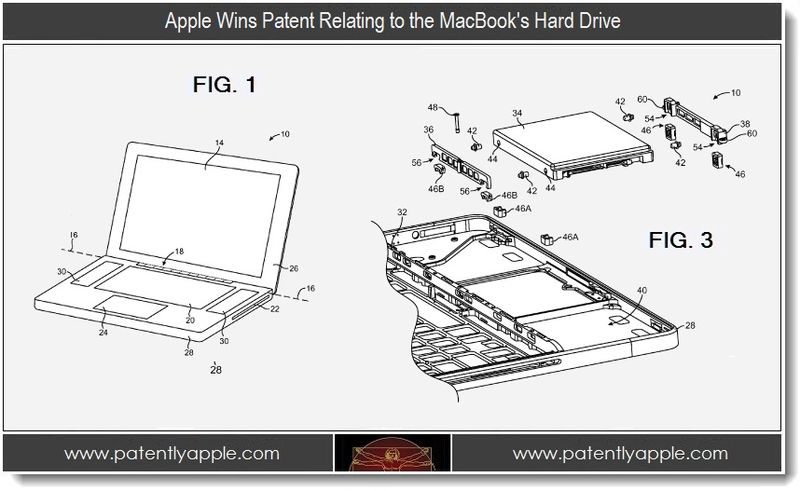 8,180,093 Assembly for coupling the housings of an electronic device