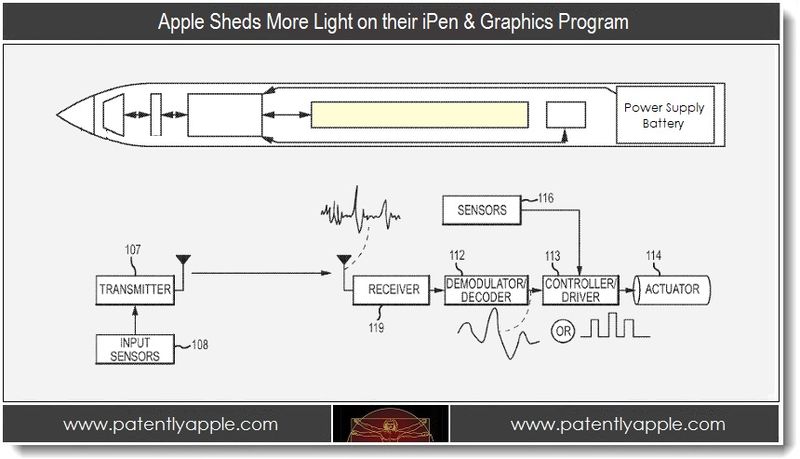 On May 24, 2012, the US Patent & Trademark Office published a patent application from Apple that sheds more light on their future iPen and related graphics program. Apple continues to spend time and R&D funding on a future iPen device that's being designed to work with all of Apple's tablet-styled iDevices. The focus found in today's invention is twofold. Firstly, Apple is thinking of adding advanced haptics to the iPen so that the end user will be able to feel brush strokes and/or line thicknesses for example. Secondly, Apple is designing the iPen with a built-in mini speaker so as to provide users with various forms of audio feedback. To make all of this interesting and relevant, Apple sheds a little light on how their iPen will work with either a new graphics/paint program of their  own and/or with known apps such as Autodesk and Microsoft's Paint.

Existing touch-based user interface devices typically have a touch panel and a visual display component. The touch panel may include a touch sensitive surface that, in response to detecting a touch event, generates a signal that could be processed and utilized by other components of an electronic device. The touch sensitive surface may be separate from the display component, such as in the case of a trackpad, or may be integrated into or positioned in front a display screen, such as in the case of a display touch screen.

Generally, input devices don't provide haptic feedback to a user in response to interactions with the input device. The user could typically only feel the rigid surface of the touch screen, making it difficult to find icons, hyperlinks, text boxes, or other user-selectable input elements on the display. An input device capable of generating haptic feedback may help a user navigate content displayed on the display screen, and may further serve to enhance the content of various applications by creating a more appealing and realistic user interface. "Haptic feedback" may be any tactile feedback. Examples include forces, vibrations, and/or motions that may be sensed by the user. 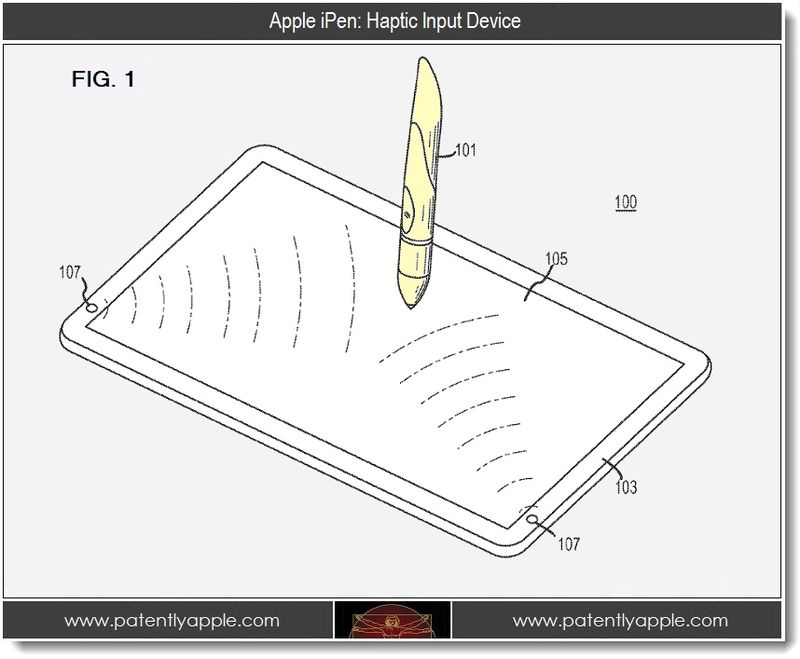 Apple's patent FIG. 1 illustrates a tablet or iPad incorporating a haptic input device 101. The touch-based user interface device 103 may include a touch screen surface 105 and one or more transmitters 107 configured to wirelessly transmit signals to a receiver of the iPen.

The iPen may be configured to provide haptic feedback to a user. This haptic feedback may be any type of tactile feedback that takes advantage of a user's sense of touch and/or sight, for example, by creating forces, vibrations, and/or motions that may be perceived by the user.

The iPen to Work with iPhone, iPad & beyond

Some of the examples of touch-based user interface devices incorporating touch screen surfaces and future haptics include Apple's iPhone, iPad, iPod touch and beyond. The touch-based user interface device 103 senses various touch-based input gestures, such as swiping, taping, scrolling, and so on, applied across the touch screen surface 105. The input sensors may include one or more capacitive sensors, optical sensors, acoustic sensors, force sensors, and so on. Touch-based input may be applied by moving the iPen.

For example, a tap onto the touch screen surface may be associated with a selection, while sliding the object along the touch screen surface in a particular manner may be associated with scrolling, enlarging, shrinking, and so on. In some embodiments, a combination of gestures by a finger or other object and the haptic input device may be interpreted together to provide a particular haptic feedback to a user through the iPen.

The iPen will Work with Apple's Own Graphics Program or Others

Another aspect of Apple's invention includes position-based feedback. The iPen may provide haptic, audible and/or visual feedback when the device passes over a selectable button or icon being displayed by the touch screen. For example, in one embodiment, the processing device of the touch-based user interface device 103 may run a graphics editing program that allows the user to create an image by moving the iPen across the touch screen to manipulate a cursor to draw or otherwise interact with graphical elements.

In this embodiment, the iPen may be configured to provide haptic/visual/audible feedback when the user selects the drawing cursor using the iPen. The graphics editing program may be similar to various commercial off-the-shelf programs, such as, Autodesk, Inc.'s SketchBook, KikiPixel's Inspire Pro, Microsoft Corporation's MS Paint, and so on. Apple has provided a number of hints regarding a future graphics and /or paint program over the years (one, two) using the magic mouse. Extending its functionality to tablets via the evolution of the iPen would only be natural.

With respect to embodiments in which the tablet is running a graphics editing program, the iPen may allow the user to "draw" an image only if it's positioned over a "paintable" portion of the touch screen surface. Certain embodiments may also provide haptic feedback that varies with a distance to a user interface element, such as a selectable icon and the like.

Apple notes that the iPen may have one or more orientation sensors, such as a multi-axis accelerometer, that may determine the axial orientation of the haptic device. Thus, the orientation sensor may detect when the iPen rotates and a line may be made thicker or thinner, darker or lighter in a graphics program by this action. As another example, rotating the iPen in one direction may increase an audio volume from an associated device, while rotating the haptic device in another direction may decrease the audio volume.

In another embodiment, the iPen may further include an optional audio transmitter, such as a speaker, that is communicatively coupled to the controller 113. The controller may transmit control commands to the speaker based on information received from the sensors 116 and/or the one or more transmitters on the touch-based tablet. The output of the speaker may vary based on the activity being simulated, as well as the user's manipulation of the iPen. For example, in one embodiment, the speaker may simulate the sound of moving a pen or a paintbrush across a piece of paper or a canvas, with the speaker emitting different sounds for emulating a pen or a paintbrush. In another embodiment, the volume of the speaker may be adjusted based on the amount of pressure being applied to the touch screen surface 105. For example, the volume may be gradually increased as the input device 101 applies more pressure to the touch screen surface 105. In other embodiments, the volume and/or sound may be adjusted according to the position of the input device 101 relative to the touch screen surface 105. 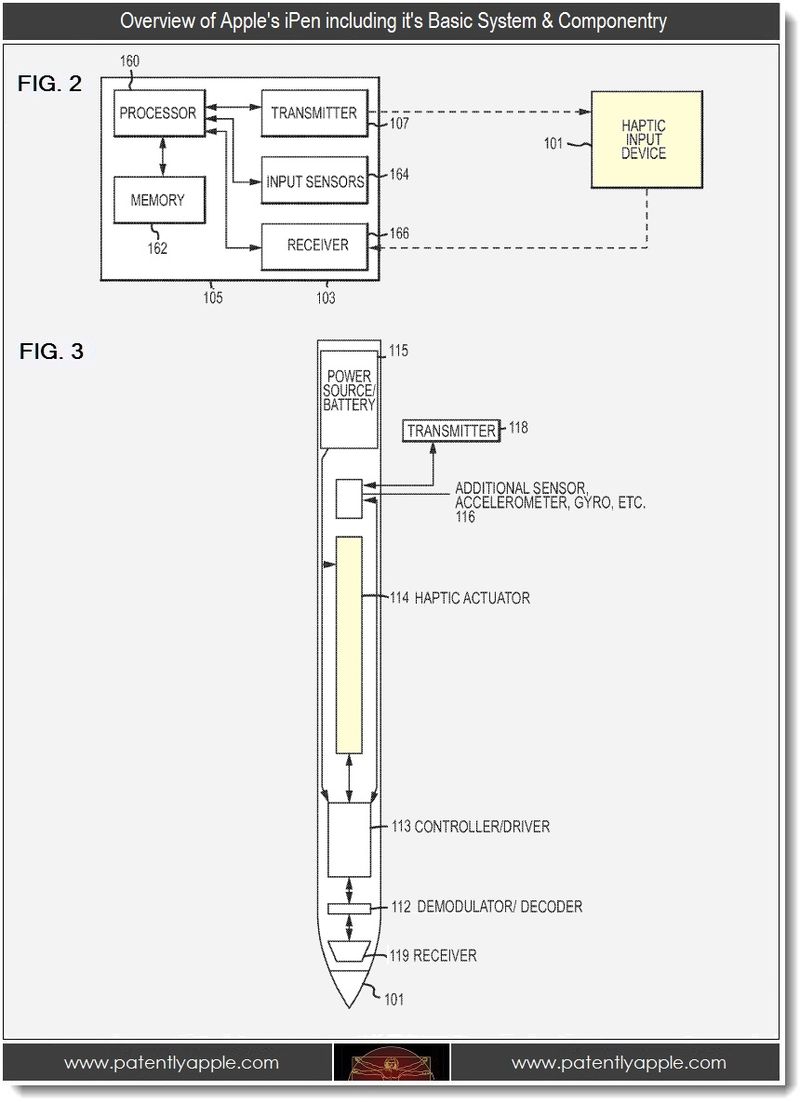 The Tip of Apple's iPen

As shown in patent FIG. 3 below, the iPen may include one or more engagement portions or tips configured to contact (and to register contact on) the touch screen surface, a receiver 119, a decoder 112, a controller 113, one or more haptic actuators 114, one or more optional sensors 116 configured to sense various characteristics of the user's manipulation of the iPen, and an optional transmitter 118.

As shown in FIG. 3, the iPen may also include a power source 115 configured to supply power to the controller and/or the haptic actuator. The power source may be a battery or some other type of power supply, such as a power adapter, an electromechanical system such as a generator or an alternator, a solar power cell, and so on and so forth.

The tip may be communicatively coupled to a receiver 119. The receiver may be any type of wireless or wired receiver that is configured to receive signals from the one or more transmitters 107 of the touch-based tablet. The wireless signals may be transmitted using any type of wireless transmission medium, including, but not limited to, Wi-Fi, Bluetooth, IR, RF, and so on and so forth.

Apple's patent FIG. 7 is a schematic diagram one possible operation of the iPen system. As shown in FIG. 7, the touch-based tablet may run an operating system supporting one or more software or firmware applications. For example, an active application may be a game, a graphics editing program, a word processing program, and so on. 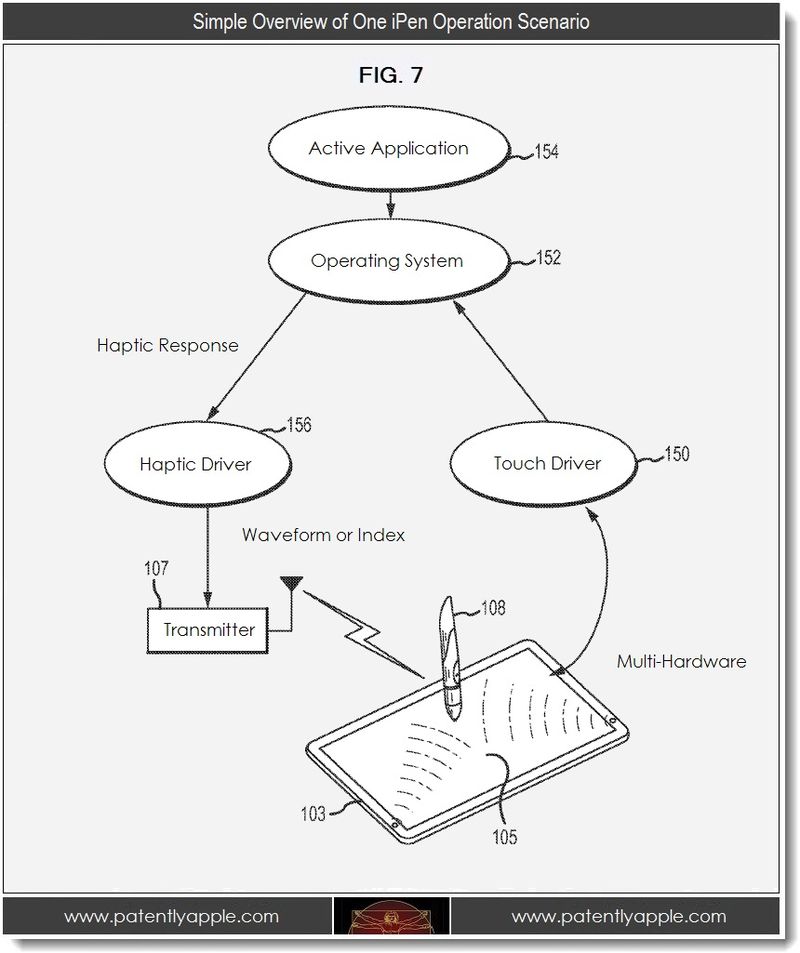 Apple's patent application was originally filed in Q4 2010 by inventors Aleksandar Pance and Omar Leung and published by the US Patent and Trademark Office today.

Also see a Secondary Report on this Topic Titled: "Apple Points to Writing on Future iPad with Optical iPen

Some sites are claiming this to be a rumor for the next iPad. Patently Apple is honest enough to not make that claim whatsoever. It's another Apple patent in a series of them and it's clear that Apple has several teams vying for the winning design. It could still take awhile.

Personally, I'd love a pen with fine lines for doodling out ideas in my head. Samsung wins the day on that front but it's on a sucky OS. Maybe one day I'll have my cake and eat it too.

Apple has so many patents on next generation ideas about where they stylus could go, it's just a matter of time. The old dumb plastic stylus of 2007 that Jobs didn't like has nothing to do with where the stylus is going. And with Ive designing the magnet cover for the iPad, I'm sure he can design an advanced stylus that clips to the iPad magnetically.

I'd love a pen for precision writing and small stuff design. Samsung is the only one with the guts to do it, but Apple will likely be the one that gets it right.

I suspect an added security feature is the natural signature of the user.

No longer would you need to memorize a password, to unlock your personal iPen, you sign your name on any surface.

An application would only need to receive the public key locally and private token via internet/server.