Apple Points to Writing on Future iPad with Optical iPen On May 24, 2012, the US Patent & Trademark Office published two major patent applications from Apple relating to a future iPen. In our first report published this morning titled "Apple Sheds More Light on their iPen & Graphics Program," we covered Apple's push into specialized haptics for a future iPen. In our second report, we focus on Apple's consideration of using an optical based iPen. The unique angle taken by Apple's optical pen is a fascinating approach to determine a pen's location on a tablet surface. One of the secrets utilized in this approach uses invisible indicia.

Writing on an iPad

Finally, Apple presents a simple case for an optical stylus that will allow for position-based sense writing on a touch screen display. The contact of the optical stylus with the touch screen may be differentiated from input from a hand or finger. The optical stylus works in addition to capacitive sensing, may provide sub-millimeter scale resolution and, in some embodiments, may have a pointed tip to provide precision input. Additionally, the stylus operates independent of an orientation or rotation of the stylus and/or screen. In some embodiments, the stylus may be pressure sensitive and may communicate data to a host device wirelessly.

An Overview of the Optical iPen

The body of the optical iPen could be made of a suitable material such as a metal, alloy, plastic, composite, or other suitable material. Specifically, the end cover is configured to allow for communicative transmissions via a radio frequency (RF) transparent material, such as a plastic in some embodiments. In other embodiments, the end cover 14 could be configured as a signal diffuser to diffuse an infrared (IR) signal, for example. The end cover 16 may be made of a plastic material or other material that will generally not be likely to scratch or damage a display screen of the tablet.

Apple's patent FIG. 2 illustrates an example cross-sectional view of the stylus 10 of FIG. 1. As shown in this example, a camera 18 may be positioned within the body 12 of the stylus. The camera may be a suitable light sensor for the purposes described in the invention. In some embodiments, the camera includes a charge-coupled device (CCD) sensor. Additionally, in some embodiments, a light source 20 may be provided and include one or more light emitting diodes. In some embodiments, the light source may emit in a non-visible portion of the electromagnetic spectrum, such as the IR spectrum. 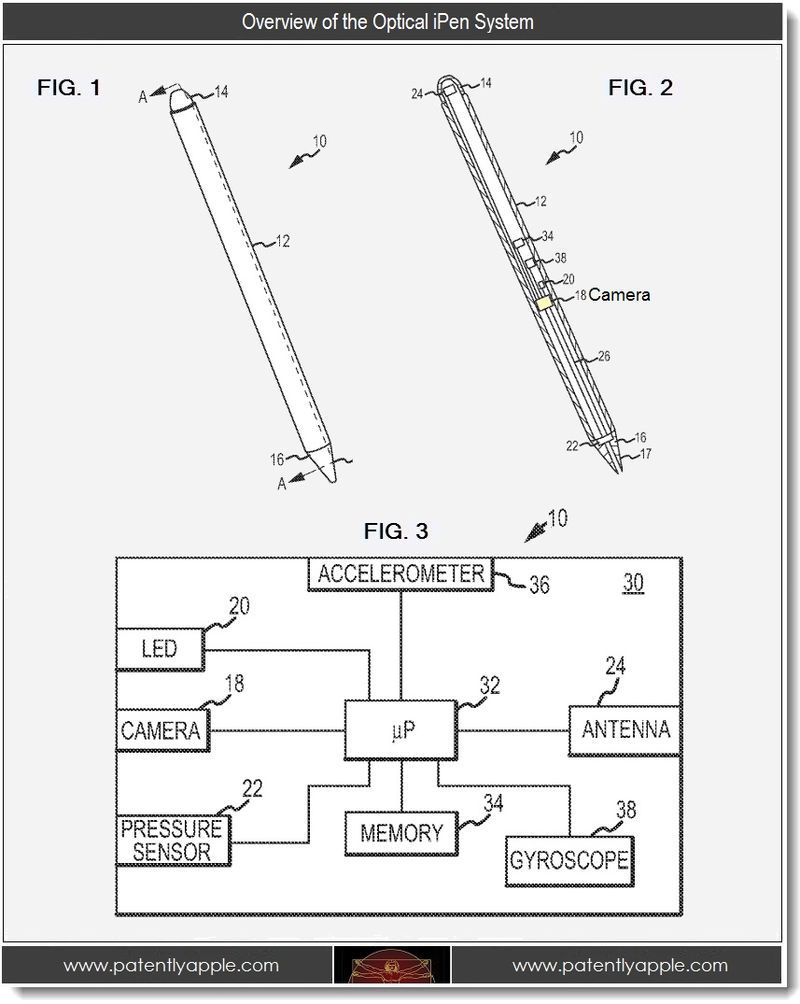 In some embodiments, a pressure sensor 22 may be located under, adjacent to or coupled with the end cover 16.

In some embodiments, the pressure sensor may serve as a trigger for the capture, processing and/or transmission of location indicative images by the camera of the stylus. That is, the camera in the iPen may take images of the pattern(s) on the touch screen in response to the pressure sensor registering an indication of pressure being applied to the tip of the iPen. How the iPen may actually function with an iPad is simply fascinating. According to Apple, a tablet like the iPad may have a touch sensitive display that provides a visual output to a user and may receive input from the user. Generally, the touch sensitive display doesn't detect contact by the iPen. In particular, contact by the iPen on the surface of the display may not register as an input to the iPad. Rather, the iPen may provide input to the tablet via a wireless communication channel, such as an RF channel, an IR channel, or the like.

A pattern, design and/or code may be provided that is not visible to a human eye, but may be captured by the camera of the iPen to determine the relative location of the iPen relative to the tablet's display. In some embodiments, the pattern may take the form of a QR code, a 2D code, a bar code and/or one or more other suitable encoding format – see patent FIG. 6 below. 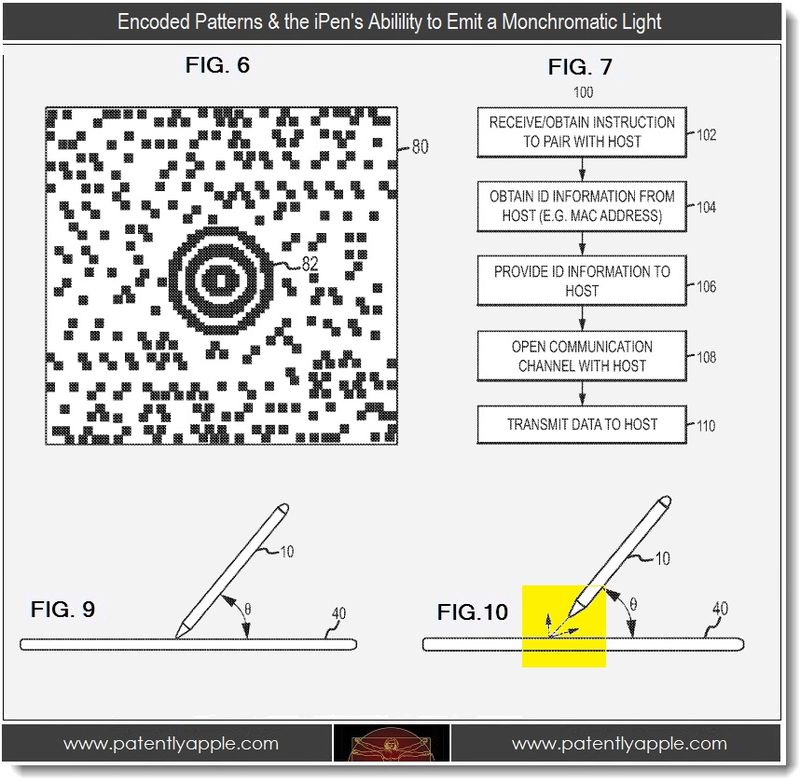 Apple's patent FIG. 9 above illustrates a side-view of the optical iPen of FIG. 1 with the host computing system of FIG. 4. And finally in patent FIG. 10, Apple illustrates that an iPen could emit a monochromatic light directed at the surface of the tablet having a birefringent ITO that reflects light back toward the stylus. The reflected light is refracted so that it has a different wavelength than the monochromatic light that was transmitted. The wavelengths of light that are captured by the iPen may be used to determine the distance of the stylus from the surface of the tablet to that of the iPen relative to the tablet.

Apple's patent application was originally filed in Q4 2010 by inventors David Amm, David Simon and Omar Leung and published today by the US Patent and Trademark Office.