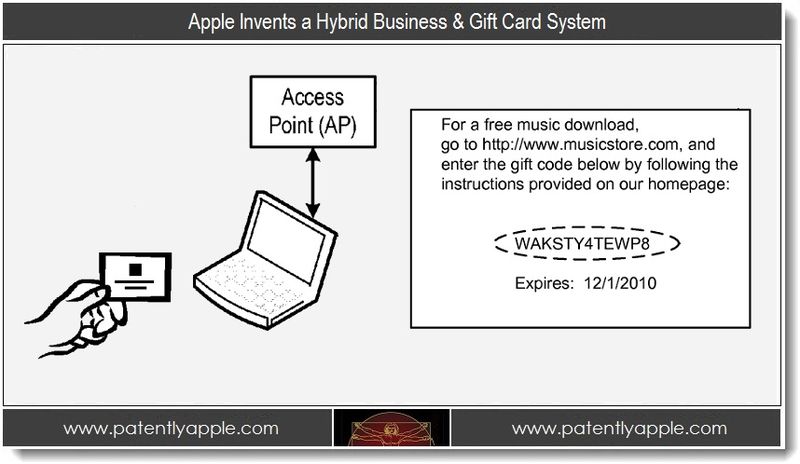 On May 17, 2012, the US Patent & Trademark Office published a patent application from Apple that reveals a newly invented hybrid business card and gift card system. For any company principle or representative attending large events and tradeshows, Apple's unique hybrid calling card and promo gift card is something that could make exchanging cards with new contacts a little more inventive, if not interesting. Who wouldn't want to receive a few new tunes or other gift by taking a business card at an event? It's a way to at least ensure that your business card doesn't get chucked in the garbage by day's end. But there's more to the system and our report details it all.

A business card includes business information about a company or individual and is commonly shared during formal introductions. A business card typically includes the giver's name, company and contact information such as a street address, telephone number, fax number, e-mail address and website.

A gift card resembles a credit card and can be identified by a specific number or code, not usually with an individual name. Gift cards are often backed by an on-line electronic system for authorization. Some gift cards have a barcode or magnetic strip, which is read by an electronic credit card machine. Other gift cards can include a code that can be typed into an electronic device such as a computer or mobile phone for redemption of online content.

A combined business card and gift card or "calling card" is a physical object that can be shared with others at business and social functions. The calling card can include a gift code that can be used to redeem a gift online (e.g., songs, ringtones, coupons, physical merchandise) using an electronic communications device (e.g., a personal computer, mobile phone, electronic tablet). When a user attempts to redeem the gift online, the user can be provided with a web page, email, text message or other electronic document that provides the user with information about the card provider and allows the user to perform certain actions for the benefit of the card provider or a third party. In some implementations, the information can be presented in a window or other display area generated locally by an operating system or application running on the electronic communications device.

In some implementations, the card provider is electronically alerted during or after an attempt by the user to redeem the gift online. The alert message can include presenting the card provider with a web page, email, text message or other electronic document on an electronic communications device. In some implementations, the alert message can be presented in a window or other display area generated locally by an operating system or application running on the electronic communications device.

The Advantages of Combination Cards

Beyond being a tool for sales and marketing, the combination business-gift card could be used in other scenarios. Apple provides us with a specific scenario relating to University recruiting as noted below: 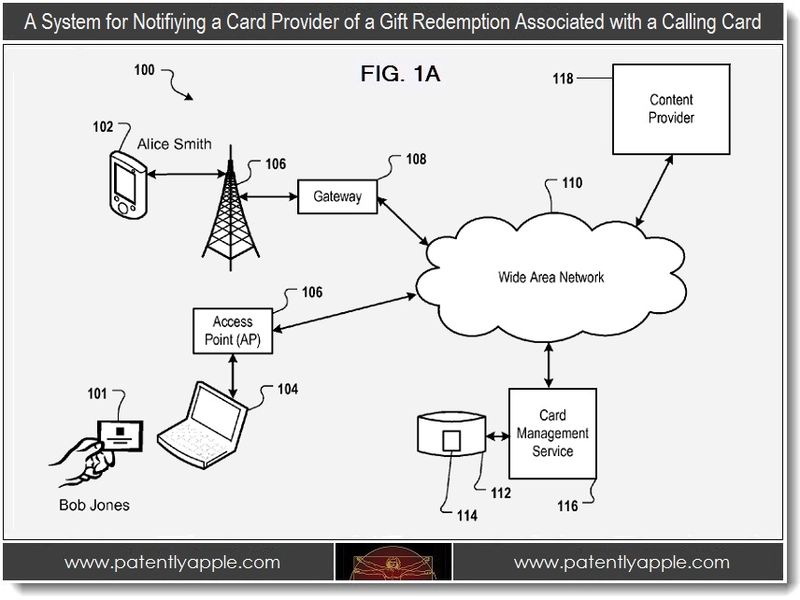 Alice M. Smith is a college recruiter for Acme Inc. She is attending a job fair at MIT in Cambridge, Massachusetts on September 1, 2010. Before going to the event, Alice contacts Card Management Services (CMS – noted as patent point #116 above) and requests calling cards for the event. In some implementations, the request can be made through a web page of an online website operated by or on behalf of CMS. Alice receives a box of calling cards from CMS, the box is labeled with a code that identifies the box and a consecutively numbered or otherwise ordered series of calling cards in a defined range. For example, the box could include 100 calling cards consecutively numbered from 300-400. 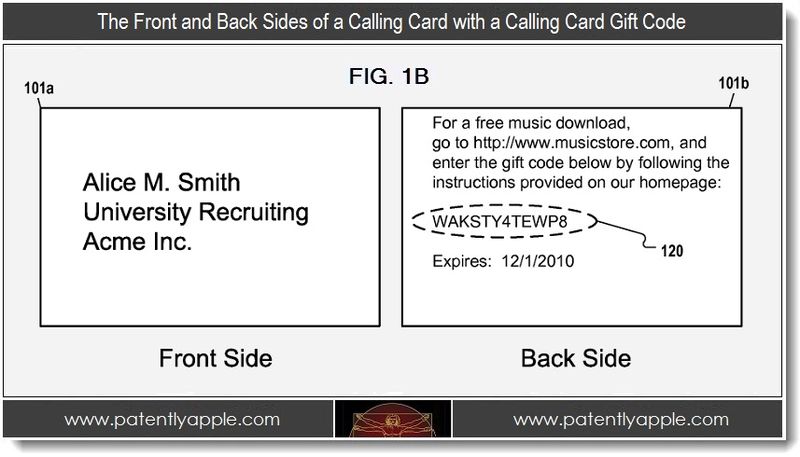 Alice attends the job fair and starts handing out the calling cards to prospective students. In some cases, she may receive resumes from the students. She also takes notes about the students she meets. In this example, she meets a student named Bob Jones. Bob does not have a resume but expresses interest in working for Acme. Alice hands Bob calling card 101 noted above in patent figure 1B. The front side of the calling card (101a) includes her business information.

The backside of the calling card (101b) includes a gift code (120), expiration date and instructions for redeeming a free gift at a website of content provider (118 of FIG.1A). In this example, the content provider is the fictitious "MusicStore.com" and the free gift is a song download. Other types of content can be provided and may not be offered for free depending on the use scenario.

The Calling card is one example format for a calling card. Other formats are also possible, such as cards having a magnetic strip or barcode as a carrier for the gift code. Calling cards can be made of any desirable material, such as paper or plastic. In some implementations, objects other than cards can be used to carry gift codes, such as small toys, novelty items, pens or any other marketing item that is typically provided at social or business events. 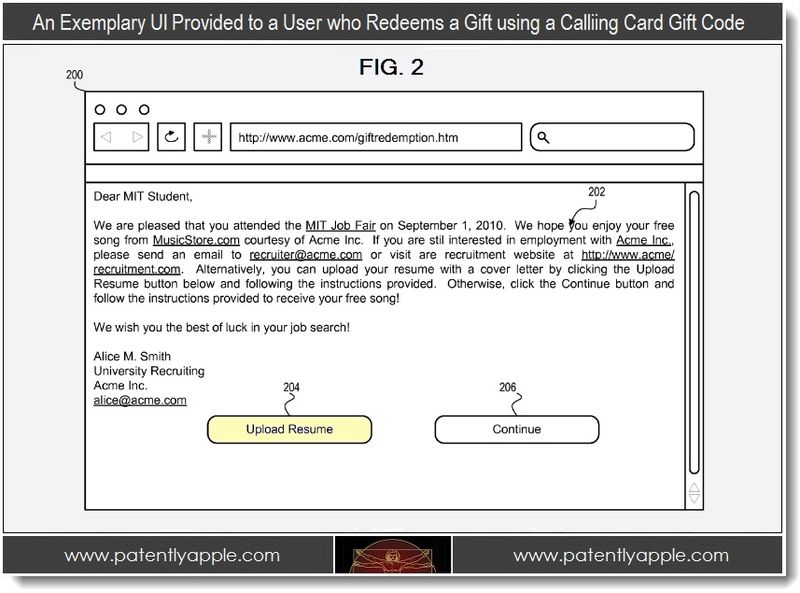 After the event, Bob enters the gift code into his notebook. Per the instructions on the calling card, Bob uses his browser to access the homepage of the MusicStore.com website. Bob follows the instructions on a home page, which can include entering the gift code into an input field. Before the free song is downloaded, Bob is presented with a user interface (200) as noted in patent FIG. 2 above. 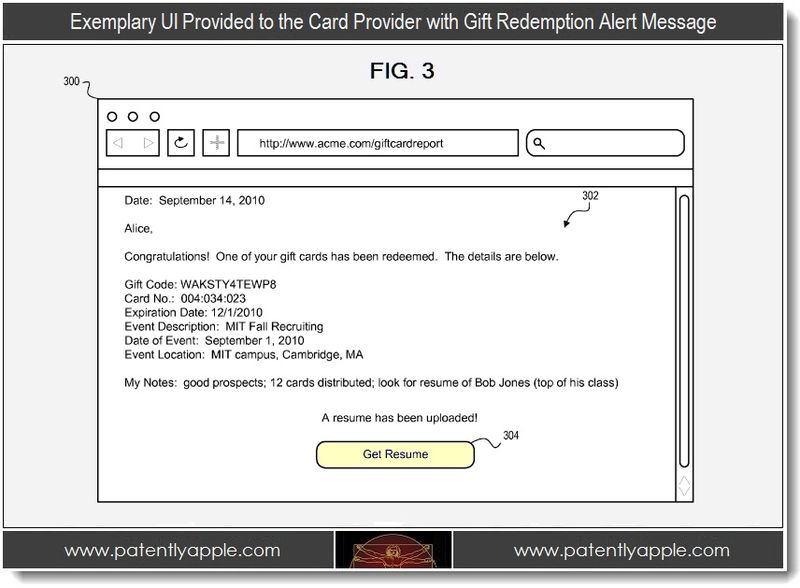 Apple's patent FIG. 3 noted above illustrates an exemplary user interface provided to card provider (Alice) associated with calling card for providing the card provider with a gift redemption alert message. The Gift code entered on a notebook (or any iDevice) can be transmitted to CMS 116 through AP 106 and network 110. CMS 116 can compare the code to record 114 in database 112 to identify calling card number 101 and the card provider. Below is an exemplary database record 114 of database 112 that can be used to associate a gift code with other relevant information.

It's interesting to note that when Apple describes the devices that this system could apply to, they introduce a new category simply noted as "internet television systems." Being that the sole inventor of this patent application is none other than the engineering manager of Apple TV, I think it's safe to say that this is a significant slip worth noting.

We at maMeishi.com are very happy to see this patent!
We also believe there has to be more value in a business card than just some information you can find online and most of all the paper business card has to be the physical bridge helping forge connections.
Many companies are just abandoning paper business card altogether, but there is still a lot we can do with them!