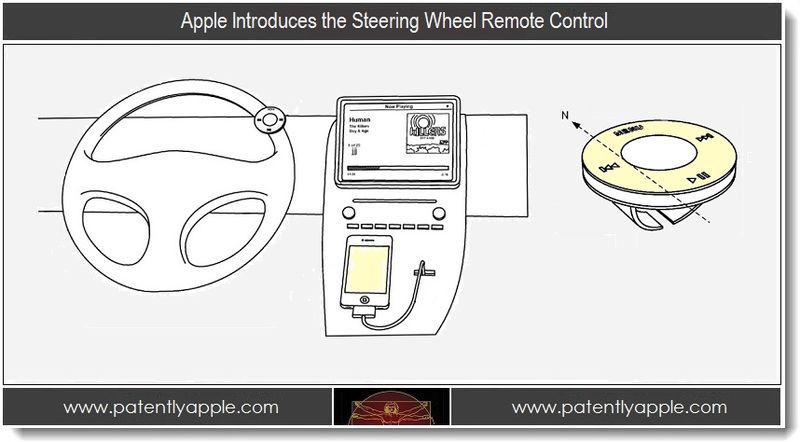 The US Patent and Trademark Office officially published a series of twenty-one newly granted patents for Apple Inc. today. The most surprising one of them all is one that snuck through the patent system until today. The newly granted patent, which has never been seen before, reveals a wireless remote control for a vehicle's steering wheel. At a time when local and federal laws are being drafted to enforce "hands free" operation of smartphones and other devices in vehicles, Apple's invention comes to the rescue to provide their customers with a sound solution. The design borrows from Apple's iPod clickwheel but with a new touch-sensitive design. Interesting enough is that one of the engineers working on this project was a principal designer at California's famous Frog Design. 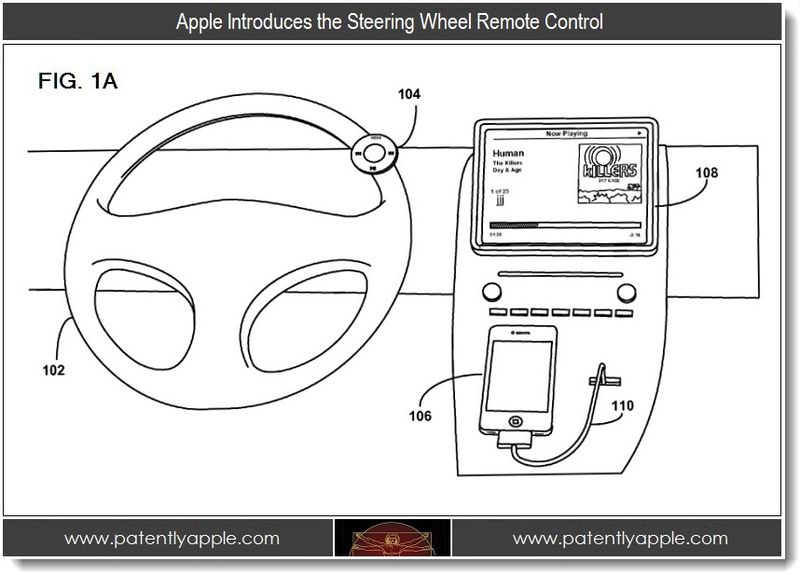 The remote control device can also include a faceplate that is rotatably mounted on top of the base section that very much resembles Apple's iPod clickwheel as noted above in patent FIG. 1A and in FIG. 2 below. The notable difference is that Apple states that the faceplate is touch-sensitive. 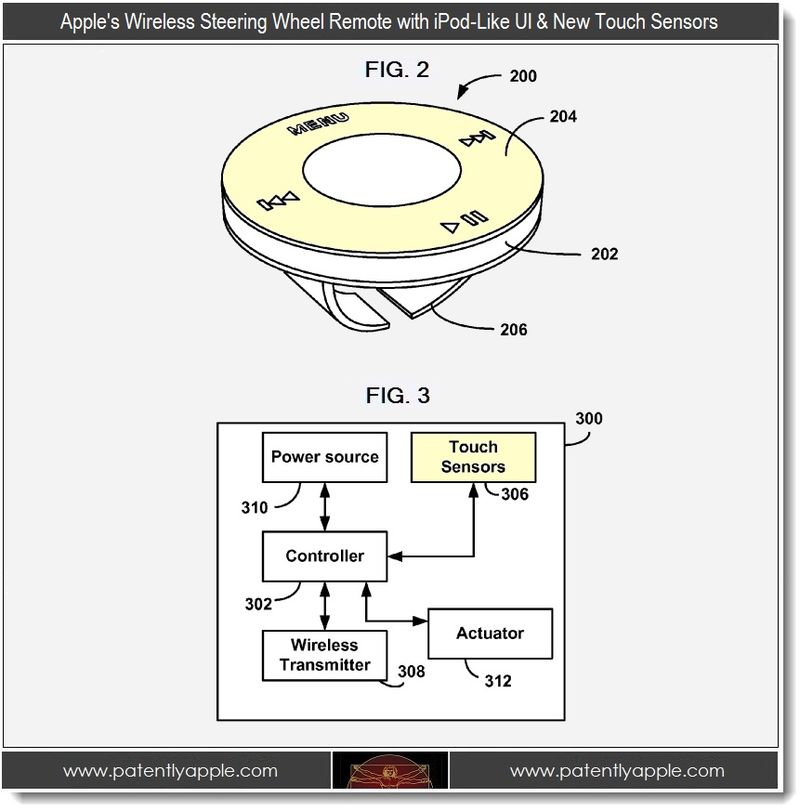 Apple's patent FIG. 3 noted above is a functional block diagram of remote control device 300 which can include a controller 302, touch sensors 306, a wireless transmitter 308 (Bluetooth and/or any other RF frequency transmitter), a power source 310, and an actuator 312. 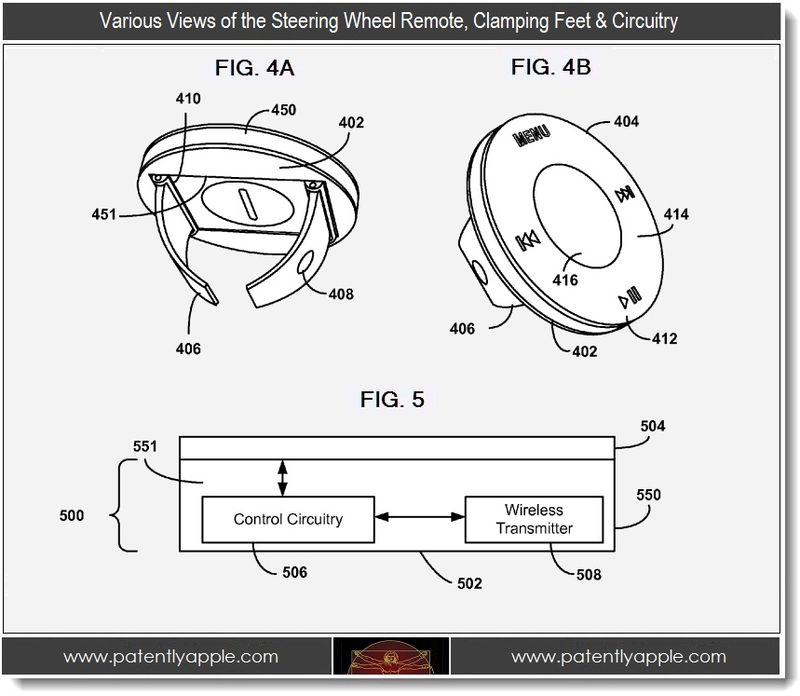 Apple's patent FIGS. 4A noted above illustrates a remote control device 400 which can include a base section 402, a faceplate 404, and one or more clamping feet 406. In patent FIG. 5, we can see that peripheral structure 550 and back face 502 can together define a chamber 551 that houses control circuitry 506 (e.g., controller 302 of FIG. 3) and the wireless transmitter 508. The faceplate can be rotatably coupled on top of the base section such that faceplate can be in electrical communication with the control circuitry and wireless transmitter at all times. 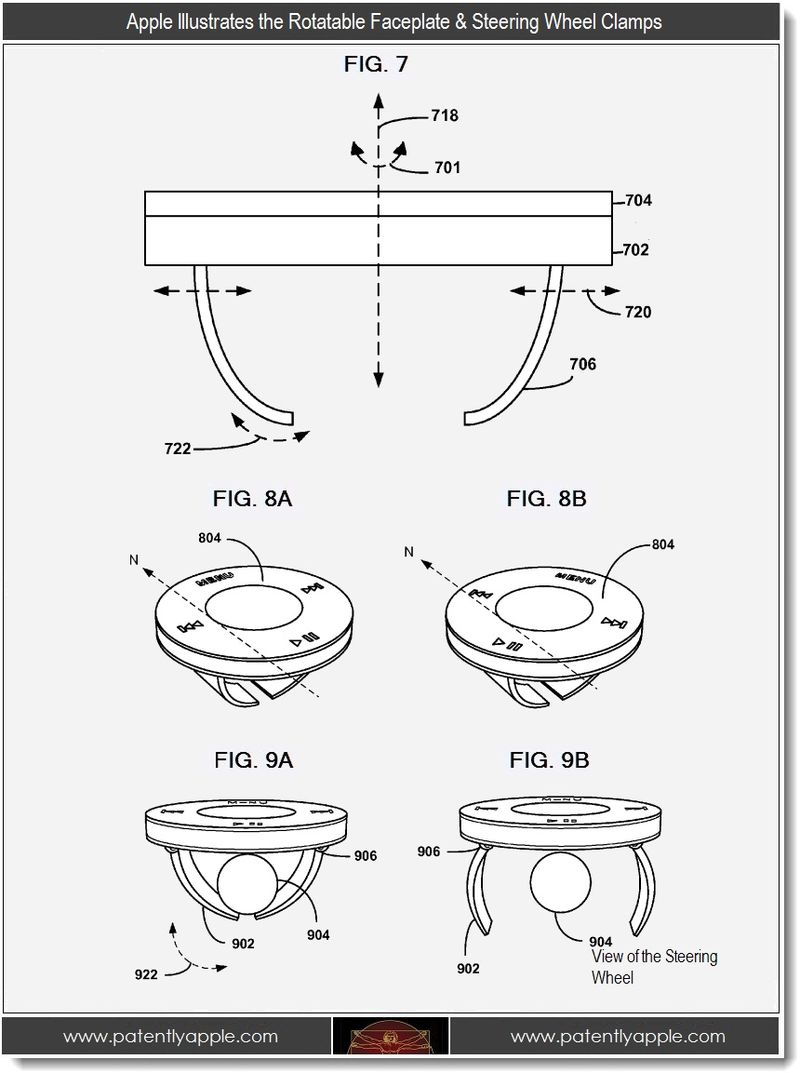 Apple notes that in some embodiments, the clamping feet and hinges can be made of a suitable metal such as aluminum; any other suitable material like plastic, composite materials, fiberglass, etc. can also be used.

Apple's patent FIGS. 10A and 10B noted below illustrate the remote control device accommodating steering wheels of two different thicknesses. The hinges 1004 can be located at either end of the track (1002) resulting in a maximum pitch between clamping feet 1010. In some embodiments, the lateral movement of hinges 1004 can be achieved in a purely mechanical manner. In patent FIG. 11 we see an illustration of a bottom view of the remote control. 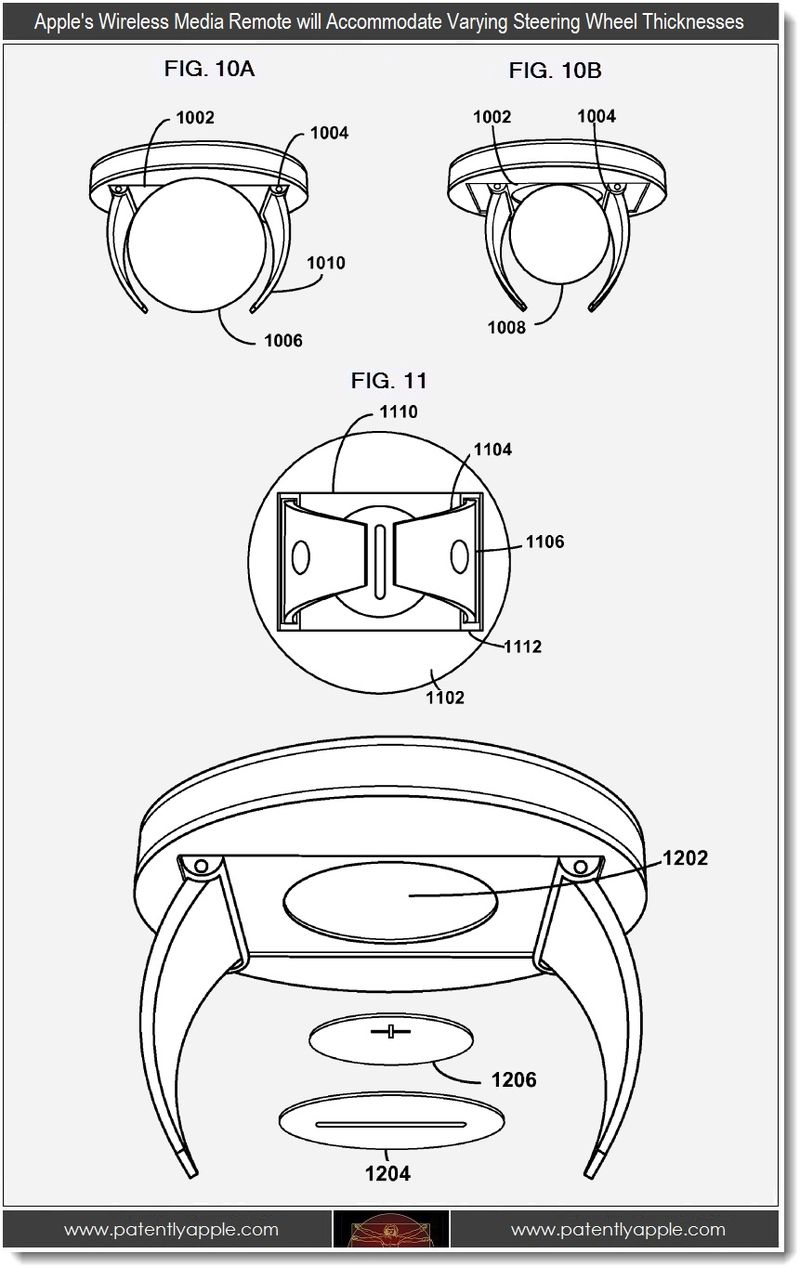 Apple credits UI Design Manager Policarpo Wood and Anton Davydov who was a principal designer at Frog Design – a company responsible for the Apple IIc and NeXT workstation designs, as the inventors of this patent. Frog Design is mentioned several times in the Walter Isaacson biography of Steve Jobs. The patent which was granted to Apple today was original filed in Q1 2011.

Join In the Conversation!

Candy, u r correct. but i think this is gonna be shitting costly.

Although you'd think that Siri would be better, I think with 3 or 4 people in the car talking, this is best. Otherwise you'd have to tell everyone to shut up if you needed to talk to Siri. The date of the filing only being 2011 is surprising being that Siri was in the works. I think it has it's place, though it could be a head fake too.