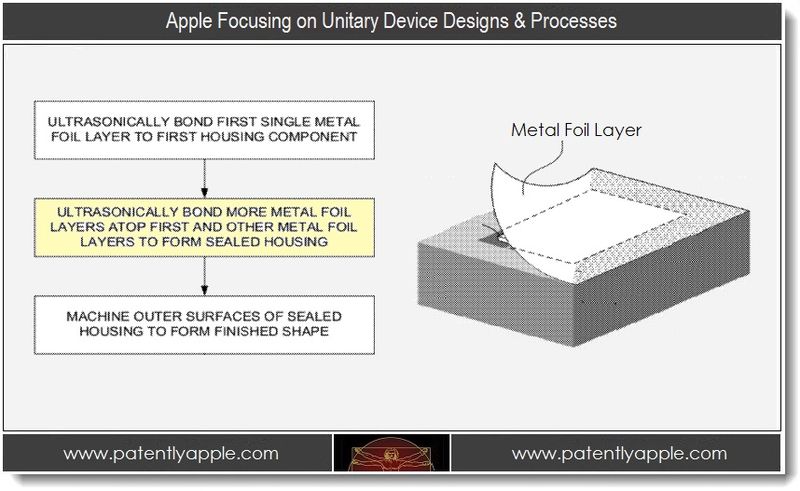 On May 17, 2012, the US Patent & Trademark Office published a patent application from Apple revealing a new manufacturing process. The main focus of this particular invention concerns the creation of devices with a unitary housing without seams or gaps. In March of this year we learned of Apple's use of ultrasonic welding in context with fastening parts within devices such as the iPhone. Today we learn of ultrasonic welding being used in conjunction with metal foil so as to create seamless form factors. It's the kind of stuff that keeps Sir Ive giggling in his sleep.

Personal computing and electronic devices, such as laptop computers, media players, cellular telephones and the like are becoming increasingly more sophisticated, powerful and consumer friendly. The ability to fabricate various components of these devices in smaller sizes, while still maintaining or increasing the power, operating speed and aesthetic appeal of such devices, has contributed greatly to this trend. Unfortunately, the trend of smaller, lighter and more powerful portable computing devices presents continuing design challenges in the actual formation of some components for these devices. One design challenge associated with such electronic devices and components therefor is the formation of the outer enclosure or housing used to house the various internal device components therein.

In particular, many electronic devices have housings that are made from several different parts, as well as complex mechanical structures, features, and/or other internal parts that must also connect or attach to the housing. Even in the more eloquently designed electronic devices, outer housings are still typically formed from multiple parts, which tends to result in at least seams or other discontinuities, if not exposed screws, tabs or other component fasteners. For example, outer housings made from just two main parts typically include an upper casing and a lower casing that are placed on top of one another and fastened together using screws or other fastening means. Such techniques typically complicate the housing design and create aesthetic difficulties because of undesirable cracks, seams, gaps or breaks at the mating surfaces, as well as exposed fasteners located along the surfaces of the housing. Even where fasteners are hidden or removed altogether from the outer surfaces of an electronic device, a mating line or seam surrounding the entire enclosure is still often produced when using an upper and lower casing.

Apple's latest invention relates to industrial design. More specifically, it provides an advantage in relationship with a single unitary housing for an electronic device that has no apparent seams or other artifacts of manufacture on its outer surface. This can be accomplished at least in part through the use of housing components that have been ultrasonically welded together with the pertinent internal parts already disposed inside the housing to form a single unitary housing that can be machined and refinished at its outer surfaces as a single item.

Apple's patent FIG. 1A shown below illustrates an exemplary metal foil stack being ultrasonically welded together is shown in front perspective view. Ultrasonic bonding system can include a base plate (10), a plurality of thin material layers arranged in a stack (20) and an ultrasonically oscillating roller (30) that is rolled across a top layer of the stack while a downward force (35) is applied to the roller.

In some embodiments, the thin layers of stack 20 can be formed from a metal foil, such that the ultrasonic bonding is in effect a low temperature metal "welding" process. In other embodiments, the thin layers can be of other types of material, such as specially adapted paper or a thermoplastic material suitable for ultrasonic bonding. Apple's patent FIG. 1B illustrates in side elevation view the exemplary metal foil stack of FIG. 1A after the welding process. 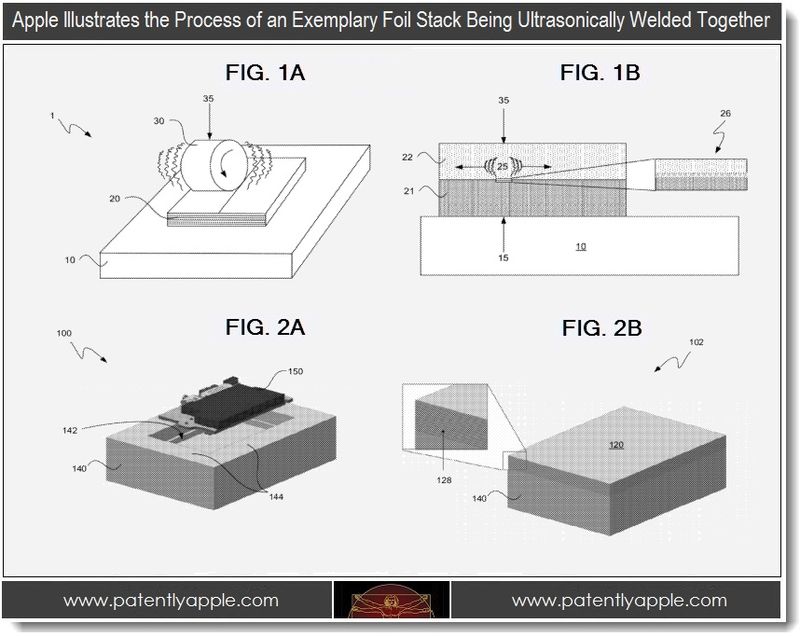 After Machining and Finishing its Outer Surfaces

To get to the final product, Apple states that both the lid component (120) and base component (140) can be machined and finished in various regions as shown such that a final rounded product having a unitary outer housing with no apparent seams, gaps or defects is produced. 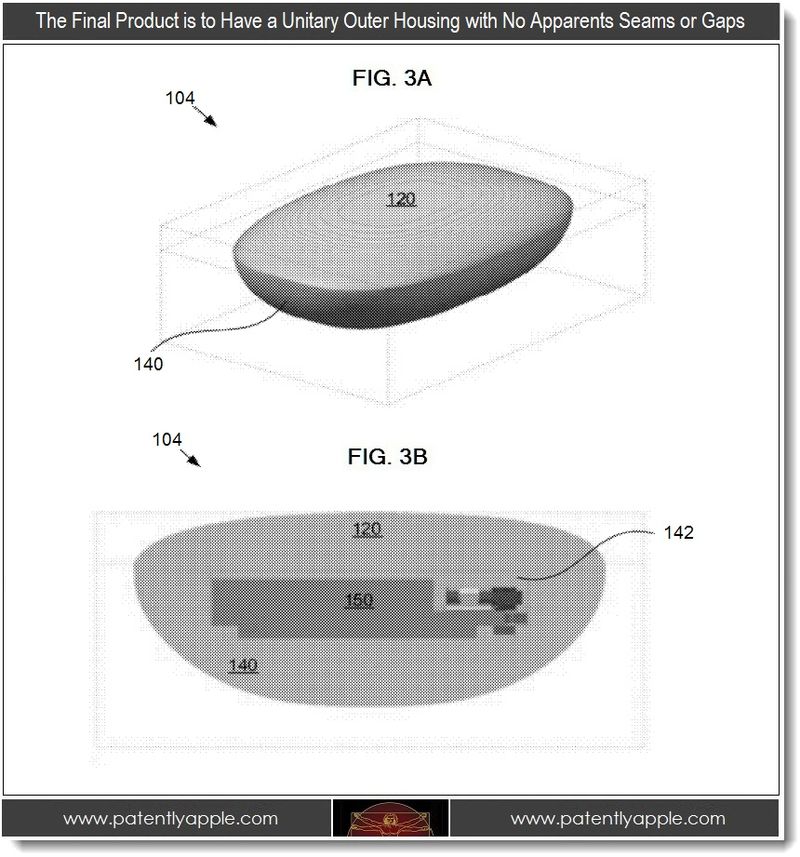 Apple's patent FIG. 6A noted below illustrates a front perspective view of an exemplary electronic device prior having a first single laminated foil layer being bonded thereto; FIG. 6B illustrates a front perspective view the exemplary electronic device of FIG. 6A after bonding of all laminated foil layers thereto. 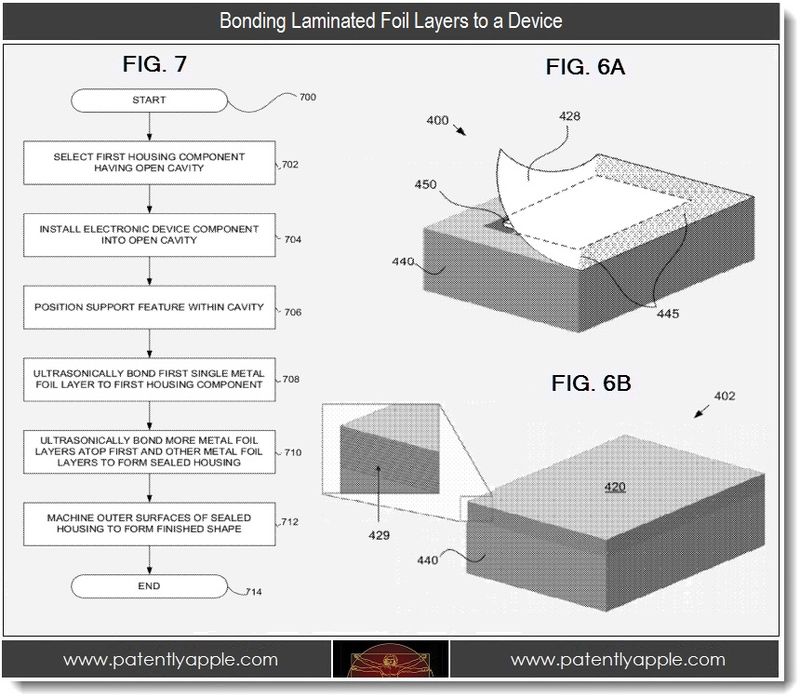 In Other IP News Today

Apple has filed trademark application 302251773 in Hong Kong China for the protection of their iOS Music Icon as shown below.  Apple claims the colors red, orange and light orange as elements of mark "A" in the series. Apple has filed their trademark under the sole International Class 009 for computer software. 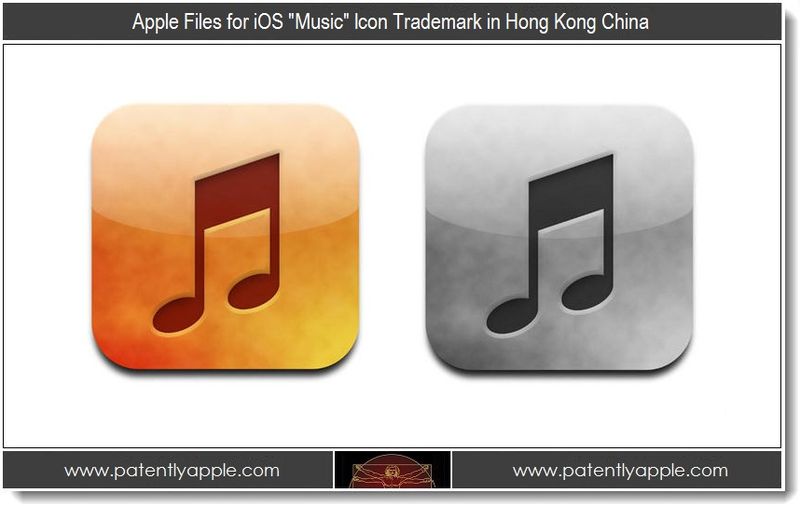