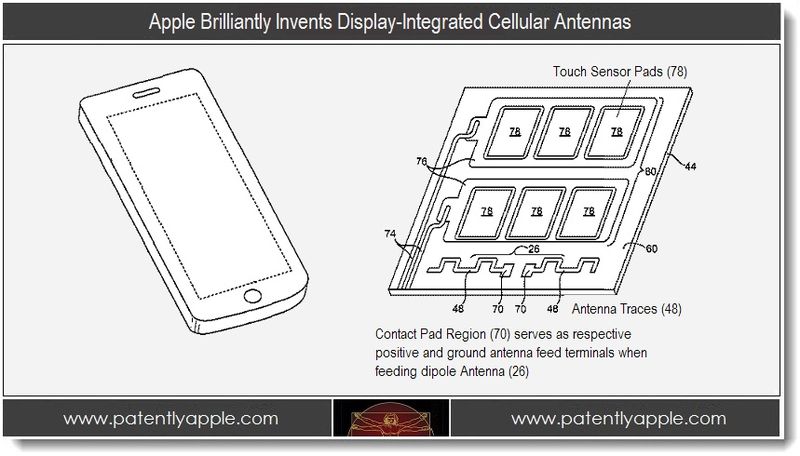 Since the summer of 2010 Patently Apple has been covering Apple's patent applications regarding a strong trend towards the development of a future MacBook with cellular-data capabilities. Just this past week, Patently Apple has discovered yet another new patent application on this subject in a filing that came to light in Europe earlier this year. This time around, Apple has brilliantly invented cellular antennas that could be integrated into a MacBook's Multi-Touch trackpad or directly into the display of an iOS device like an iPhone. That's important if Apple decides to design a future iPhone with a metal back. Now that the iPad offers 4G, the idea of the MacBook offering similar cellular-data capabilities sounds not only reasonable but inevitable.

It would therefore be desirable to be able to provide improved antennas for wireless electronic devices. 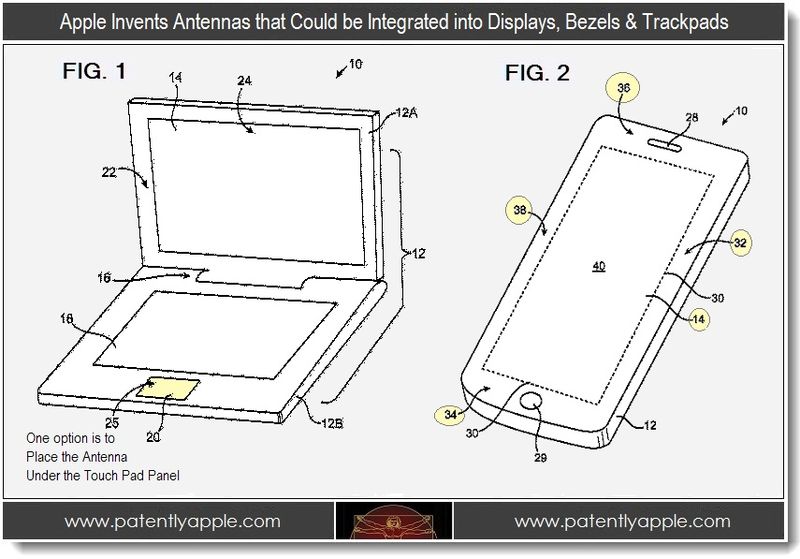 Apple states that it may be advantageous to form an antenna for device 10 which could be any electronic device. In the graphic above we see device 10 being represented as both a MacBook and iPhone.

A part of components such as display 14 of the iPhone and touch pad 20 of the MacBook have exposed faces that are not covered by metal, so radio-frequency signals could be transmitted and received through these components, even when their respective housings be formed from conductive materials.

So as to minimize device volume and to avoid issues such as signal blocking by conductive housing walls, one or more antennas earlier described may be formed as part of a component such as display 14 and/or touch pad 20 that is not covered with signal blocking conductive structures. The antennas may, for example, be formed on the underside of a display panel or touch panel.

Antennas may be formed within region 40 or outside of the region enclosed by dashed line 30. For example, antenna traces may be formed on the underside of the touch screen panel 14 in peripheral regions 32, 34, 36, or 38. 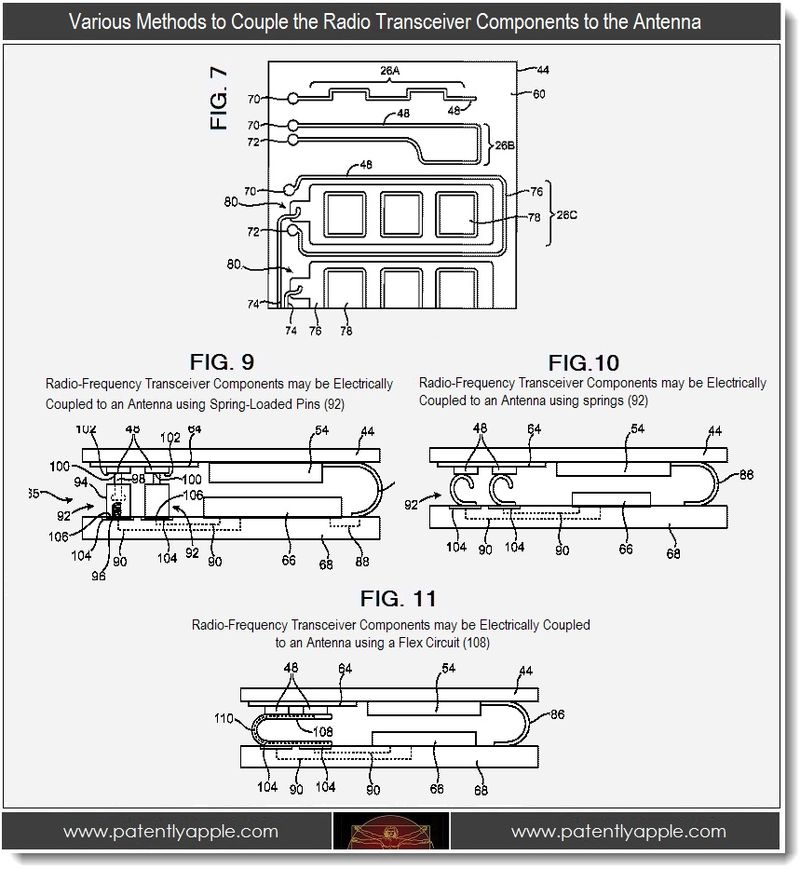 Apple's patent FIG. 7 noted above provides us with a view of an illustrative display or touch panel having capacitive touch screen sensor structures and antenna structures based on monopole and loop antenna configurations. Apple's patent figures 9 to11are side views showing how components such as radio-frequency transceiver components may be electrically coupled to an antenna using various methods such as spring-loaded pins, springs and/or a flex circuit.

Apple's patent application was originally filed in late 2010 and published by the European Patent Office earlier this year.

Now that the iPad offers 4G, the idea of the MacBook offering similar cellular-data capabilities sounds not only reasonable but inevitable – in spite of patent naysayers. Intel's 2013 Ultrabook chipset that will include their next generation Haswell processor is already being marketed as the Ultrabook that will "always be connected." This is likely a direct reflection of Intel's acquisitions of Infineon and SySDSoft.  Whether Apple will use this chipset or use their own is unknown at this time. Yet one thing is for sure, it's high time that cellular-data capabilities came to the MacBook and today's invention is just one more indication that it's likely on Apple's roadmap.