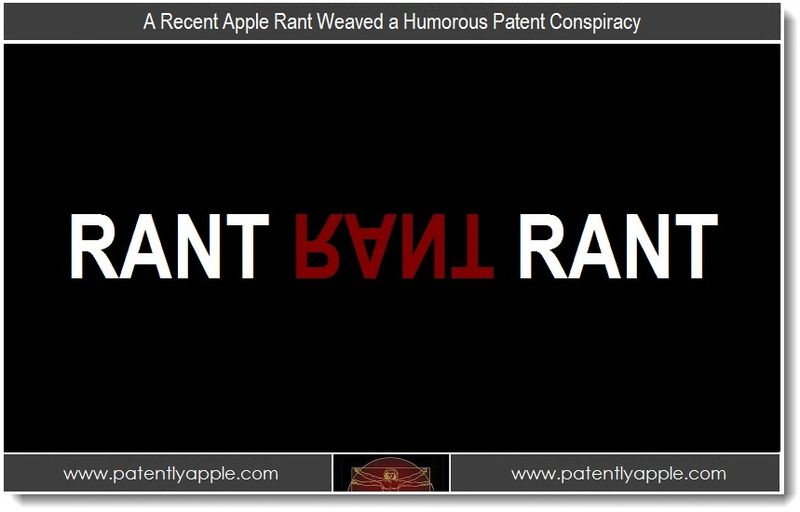 Last week Gossip Columnist Molly Wood, oops, I meant to say, CNET's executive editor Molly Wood went on a rant over a statement that Tim Cook made during Apple's Q2 2012 financial conference call. Wood takes Cook's statement to create a bizarre patent conspiracy and opportunity to besmirch one of the greatest CEO's of our generation. Wood's wild rant certainly fed the anti-Apple beast that obviously needs to be fed. But in the end, Wood has crafted a humorous patent conspiracy that will go down as a classic farce.

For the record, we'll begin by presenting the original question and full response from Tim Cook that's in question just so that you could rationally understand what supposedly set Molly Wood's hair on fire.

The question to Tim Cook was posed by Mark A Moskowitz - JP Morgan Chase & Co, Research Division: "I was just wondering how we should think about opportunities for incremental flexibility as it relates to patent disputes. Is there a point where Apple maybe feels it reasonable to settle and just continue out-innovating and outgunning the competition rather than wage an ongoing litigation? Are there opportunities for that?"

Tim Cook's Response: "I've always hated litigation, and I continue to hate it. We just want people to invent their own stuff. And so if we could get to some kind of arrangement where we could be assured that's the case and a fair settlement on the stuff that's occurred, I would highly prefer to settle versus battle. But it -- the key thing is that it's very important that Apple not become the developer for the world. We need people to invent their own stuff."

In context, there was news from Reuters that broke ten days prior to Wood's rant regarding a US judge sending Apple and Samsung into settlement talks. This is what Tim Cook knows to be the reality of the day with this question and takes a posture on this issue prior to their meeting with Samsung.

In contrast, without a context, Wood ignites her rant not with Tim Cook's statement but rather with a tirade into Steve Jobs and stealing so that she could set up her patent conspiracy plot.

Steve Jobs on Stealing is out of Context

Many ranters like to use a line that Steve Jobs made in a video where he talks about stealing ideas. These ranters use this clip to justify Android OEM's alleged stealing of Apple's Intellectual Property (IP). So let's put it into perspective. On page 396 of Walter Isaacson's Biography of Steve Jobs we read the following:

"From the earliest days at Apple, I realized that we thrived when we create intellectual property. If people copied or stole our software, we'd be out of business. If it weren't protected, there'd be no incentive for us to make software or protect designs. If protection of intellectual property begins to disappear, creative companies will disappear or never get started. But there's a simpler reason: It's wrong to steal. It hurts other people. And it hurts your own character."

Here's an example regarding the difference between taking or stealing an idea and stealing IP: Apple wasn't the first company to come up with the idea of an MP3 Player and yet they created a revolutionary UI for a next generation MP3 player. Additionally, they were talented enough to have created the iTunes music store so users could legally download music and create music playlists that would run on their next generation MP3 players. Then they added the ability to view music videos and kept building in more apps to make this next generation MP3 player, called the iPod, uniquely their own. Was Apple inspired by the original MP3 Player? – Certainly. But did they "steal" the idea from a legal standpoint? No. Apple took an idea from a product that was already in the market and reinvented the device and everything associate with it. That's legal because they didn't steal Sony's IP that was associated with the number one MP3 player of that time. And that's the fine distinction that ranters conveniently close their eyes to. A great company could always creatively add a new product category or product feature without having to outright physically copy or reverse engineer it.

Apple Owns Many Multi-Touch Patents not related to FingerWorks

In Wood's rant on Apple's patented multi-touch technology, she takes the position that most of Apple's multi-touch technology came from FingerWorks. No one is going to deny that Apple wisely acquired a young company with cutting edge engineers in a field that they knew that they were about to enter. Apple's Steve Jobs stated back in 2004, prior to the iPhone, that he always wanted Apple "to own and control the primary technology in everything" they made. Every great American company acquires smart start-ups with an edge. It's as American as Apple Pie. But that still doesn't take away from the fact that Apple has many multi-touch patents without listing the founders of FingerWorks. Here are just a few of them: One (2005), Two (2007), Three (2005), Four (2007) and Five (2006). Wood's version of the facts is designed to downplay Apple's own inventions relating to Multi-Touch so as to prop up her patent conspiracy and theory that Apple doesn't really invent anything.

You also have to note that FingerWorks never created a touch based iPod, iPhone or iPad-like device. FingerWorks was interested in making odd physical keyboards with built-in touch capabilities as well as designing virtual keyboards which Apple incorporated into the original iPhone. Yet in perspective, Apple advanced their own Multi-Touch inventions and projects by acquiring FingerWorks so as to complement their ongoing work on the iPhone.

In Wood's rant she continues by stating that Apple "used the leniency of our patent system to amass a constant and steady stream of patents related to virtually everything it creates." That was so funny that I almost fell off my chair. Thanks for that one, Molly.

According to EE/Times Rick Merritt, IBM was number one with patent filer at 6,180. Samsung was second with 4,894. Canon was number three and Microsoft was in the top ten. Where was Apple on this list of top patent filers? Apple came in at number thirty-nine with 676 patents. I guess the leniency of the patent system that Molly alludes to was in place for everyone else on that list, especially the thirty-eight companies that were ahead of Apple – the great and scary Patent Monger. And just to think that Samsung, the one that's in a dispute with Apple, is actually in the number two spot – way ahead of Apple. So isn't Samsung amassing a constant and steady stream of patents related to virtually everything it creates? No-no-no, that just doesn't fit Wood's patent conspiracy.

According to Wood's version of the world, "Apple was not the first company to invent or even think of touch-screen and multi-touch technology -- or even to invent or think of making attractive gadgets. They just own all the patents." Ya, right, okay Molly - Apple just owns all the patents. It reminds me of the magic bullet theory concocted by Allen Specter for the Warren Commission as played out in the film JFK. Just throw nonsense into a report and call it facts.

At the end of the day, Molly Wood's grand patent conspiracy never pans out. IBM filed almost ten times more patents than Apple in 2011 and their rival Samsung filed almost seven times. Wood's point of Apple owning all of the patents is simply void of rational thinking. In context with Multi-Touch, Microsoft has many multi-touch related patents on record relating to their Surface project and Samsung is constantly filing multi-touch patents with the US Patent and Trademark Office. Owning all of the patents, give me a break.

Ranters are known for creating these bizarrely knitted conspiracies so as to make the villain in their tales connivingly more "Evil." Apple was down for the count in 1997 and Steve Jobs resurrected the iconic company by being smarter and focused on next generation devices that no one ever put together like Apple did. So this notion that Apple got to the top by stealing and amassing patents is one of the saddest things that I've ever read before.

Outrageous and egregious statements recently made by Rush Limbaugh and Ted Nugent are certainly cause for a rant. And while it's understandable to a certain degree that some could have gotten their nose out of joint by Tim Cook's low key statement, it surely wasn't worthy of a rant. At the end of the day, Molly's rant deserves a hearty 10 on the Laugh-O-Meter. Yet with that said, Wood wasn't stupid; she fed the anti-Apple beast with what they wanted to hear. Just check out Molly's rant and see the comments that followed. Yes, feeding the anti-Apple crowd is popular bating material these days and on that count, Molly got exactly what she was after, regardless of the facts.

It's a shame that Ms. Woods in her capacity as Executive Editor of CNET, doesn't know how to fact-check her stories before sowing such blatant ignorance. It's obvious she must not know how to effectively use Bing, Yahoo, or Google. All the best to her and her ignorant following.

yeah, its the very same "arguments" apple haters like to use.

Never get into an argument with someone who's livelihood depends on believing a lie.