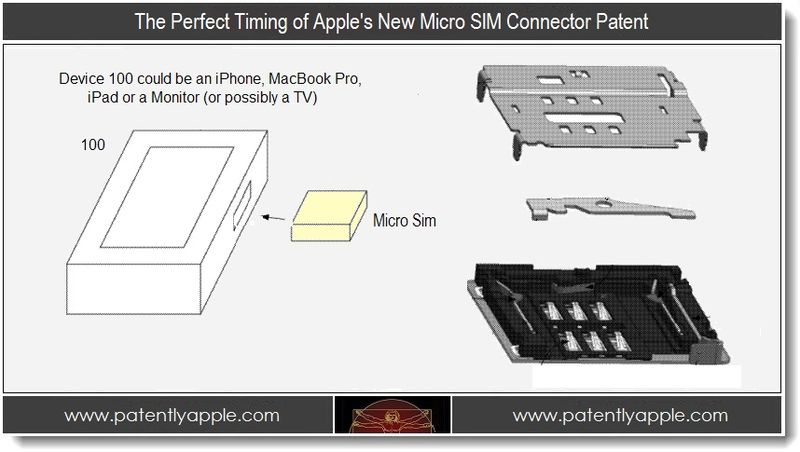 The timing of Apple's new micro SIM connector patent couldn't be more perfect in light of the battle between Nokia and Apple over the design of future miniature SIM cards for mobile devices. It's even been reported that Nokia has threatened to withdraw 50 or so SIM card related patents from ETSI if the Apple proposal is approved. Today's patent application sheds a little more light on the subject by illustrating that Apple's proposed SIM card connector could be utilized beyond smartphones and into devices such as Apple's MacBook Pro, iPod touch or even a monitor which could technically cover future televisions. The ability to transfer a SIM from one device to another is perhaps one of the advantages to Apple's design and why the ETSI is strongly considering it as a standard. In the era of mobility and device interconnectivity, Apple's solution may be the winner.

The types of electronic devices that are available to consumers have exploded the past several years, and the rate of introduction of new products shows no signs of abating. In particular, mobile communication devices, such as smart, media, and cell phones, tablet, laptop, and netbook computers, media players, and other devices, have become ubiquitous.

3G and 4G networks identify users through subscriber identity module (SIM) cards. Each device on the network may have a SIM card that identifies a user in order to properly route voice and data information to and from the user. These SIM cards may be inserted into an electronic device using a connector.

On occasion, a SIM card may need to be removed by a user. For example, a user may want to remove a SIM card from one device and insert it in another. For this reason, it may be desirable to provide a connector where a user can easily remove and replace a SIM card.

The ability to connect to a network, such as a 3G or 4G network, is an important one for many users. As such, it may be important that a connector for a SIM card not fail, but instead provide reliable mechanical performance.

Thus, what is needed are SIM connectors that allow SIM cards to be easily removed and replaced by a user, are resistant to damage by an improper insertion of a SIM card, and provide reliable mechanical performance.

Apple's invention relates to the provision of connectors that allow SIM cards to be easily removed and replaced, may be resistant to damage by an improper insertion of a SIM card, and may provide reliable mechanical performance.

An illustrative embodiment of the present invention may provide connectors that allow SIM cards to be easily removed and replaced. Specifically, a plunger system may be provided where a user can push a plunger rod and eject a SIM card. This card, or a new card, may be easily be reinserted by pushing the card into the connector.

Another illustrative embodiment of the present invention may provide connectors that are resistant to damage by improper insertion of a SIM card by a user. Specifically, internal contacts may be arranged such that they have a low profile. This low profile may enable the contacts to not be damaged during an improper insertion.

Other various embodiments of the present invention may provide for a reliable mechanical performance. One such embodiment may provide a metallic detect switch and contacts. Care may be taken in order to prevent the detect switch and contacts from being shorted. Specifically, one or more portions of the plunger system may be coated or otherwise covered by a nonconductive material. In a specific embodiment of the present invention, the nonconductive material may be polytetrafluoroethylene or Teflon.

In other embodiments of the present invention, the connector may have a plastic housing. This plastic housing may be formed using injection molding. To improve the mechanical reliability (and manufacturability) of the connector, care may be taken to avoid large variations in the thickness of the housing. To even out the thickness of the housing, various holes or open areas may be formed.

In some of these embodiments of the present invention, a metallic shield may be used for mechanical stability and electromagnetic protection. To further improve the mechanical reliability of the connector, portions of the shield may be inserted into the holes or open areas in the connector housing.

Types of Devices and SIMs Covered

Apple's patent FIG. 1 shown below illustrates an electronic device that is improved by the incorporation of an embodiment of the present invention. This figure includes electronic device 100 which could be an iPad (tablet), MacBook Pro (laptop) or netbook. The device could also be an iPhone (cell, media, or smart phone), an iPod touch (media player), monitor (which technically could also cover a future TV), or other type of electronic device. Apple's inclusion of a SIM card into a MacBook Pro/Laptop in this invention supports their many telephonic MacBook centric patent applications. Apple's mystery inclusion of "other type of card" in this application could be demystified by their latest granted patent which discusses the use of an Integrated Circuit Card (ICC) in connection with a SIM Tray. An ICC is what is used in Visa credit cards, for example. This translates to ICC's being integrated into an iPhone or other mobile device via a mini-tray system for the purposes of ecommerce. This was covered in our report titled "Apple Wins Patent Relating to Nano SIM and iWallet Chip." This is a huge advantage in Apple's SIM strategy and one that could be helpful to the entire industry. This is likely why Apple's SIM card standard is being considered by the ETSI.

The connector may further include a shield including a bottom plate 240 and top plate 280 for mechanical stability and electromagnetic shielding. The connector may also include retaining clips 250 and 252 to hold a SIM card or other device securely in place.

Contacts 230 may have a low profile. This may aid contacts 230 from being damaged if a SIM card is inserted into the connector in an upside down or otherwise improper manner. 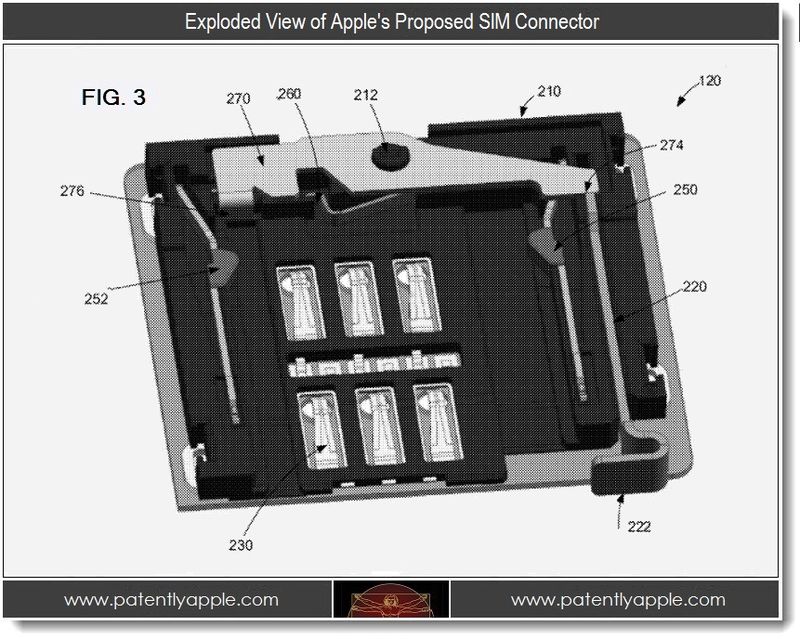 Apple's patent FIG. 3 illustrates another view of a connector. Apple notes that the connector's lever (270) may be coated with polytetrafluoroethylene, Teflon or another nonconductive material. These coatings may be desirable so that the insert switch (260) and contact point (262) don't accidentally get shorted by the lever's actions.