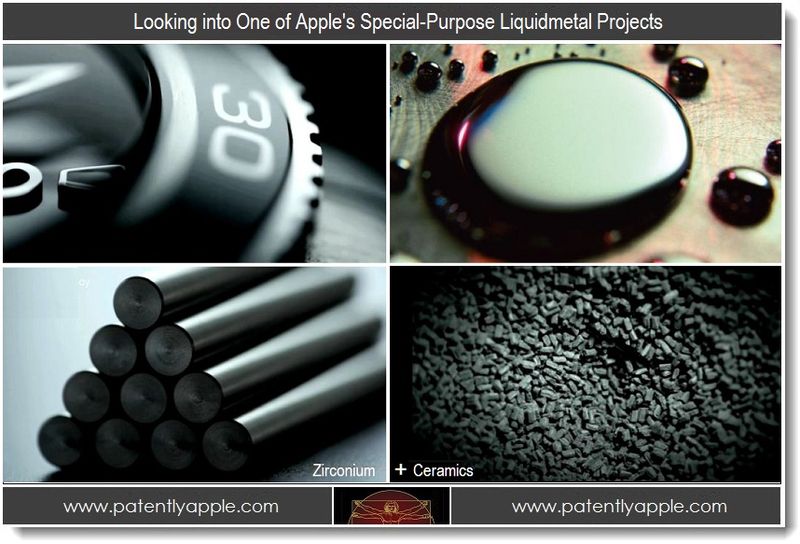 Before there was even a Master Agreement signed between Apple and Liquidmetal Technologies, there was an Apple patent describing the use of such technology. In June 2010 we posted our original report titled "Behind Apple's Stunningly Crafted iPhone is a Patent." In May 2011 we pointed out how Apple updated their trademark to cover precious metals and their alloys for such things as watches and other interesting items. Then this past Saturday, AppleInsider's Daniel Dilger reported on Liquid Metal Technologies 10-K filing with the US Securities and Exchange Commission. After reviewing the statements related to Apple in their 10-K filing form, we wanted to investigate this a little further. The end result was the discovery of a pair of interesting patents related to Apple's relationship with Liquidmetal Technologies. In March we posted a report about Apple researching methods of waterproofing iOS devices and lo and behold, one of the key projects between Liquid Technologies and Apple was about "Forming a Hermetic Seal" for waterproofing. Today's report fills you in on the details.

The following information is a segment of Liquidmetal Technologies 10-K form as made public by Yahoo! Finance:

Under the agreements relating to the license transaction, we are obligated to contribute all intellectual property that we develop through February 2012 to CIP."

The keys found in this document relate to the work done by a "special-purpose" subsidiary of Liquidmetal Technologies called Crucible Intellectual Property who was to provide Apple with a specific "statement of work." According the filing, the agreement was to be in effect until the end of February 2012. So whatever that project was to be completed in that time frame has likely now been accomplished.

Legally speaking, a "statement of work" is a formal document that captures and defines the work activities, deliverables and timeline a vendor must execute in performance of specified work for a client. You could find a very specific outline of what is typically addressed by a formal statement of work at Wikipedia.

While we may never know the full specifics of the "statement of work" that Apple laid out for Liquidmetal, we can in-part understand that it would have included patent filings that the subsidiary filed under this special purpose project. Our report now turns to providing you with some of the key points found in one of Crucible Intellectual Property's patent filings regarding the use of Liquidmetal as a sealant.

An interfacial layer and seal can be a part of an electronic device, such as, for example, a part of the housing of the device or an electrical interconnector. For example, in one embodiment, the interfacial layer or seal can be used to connect and bond two parts of the housing of an electronic device and create a seal that is impermeable to fluid, effectively rendering the device water proof and air tight such that fluid cannot enter the interior of the device.

So what kind of Apple applications could utilize this sealing process? The patent states that it applies to a telephone, such as a cell phone, and a land-line phone, or any communication devices, such as a smart phone, including, for example an iPhone. Other listed devices include an electronic email sending/receiving device or be a part of a display, such as a digital display, a TV monitor, an electronic-book reader, an iPad and a computer monitor.

It can also be used in an entertainment device, including portable DVD player, conventional DVD player, Blue-Ray disk player, video game console and a music player such as an iPod and so forth.

It can also be a part of a device that provides control, such as controlling the streaming of images, videos, sounds such an Apple TV or it can be a remote control for an electronic device. It can be a part of a computer or its accessories, such as the hard drive tower housing or casing, laptop housing, laptop keyboard, laptop track pad, desktop keyboard, mouse, and speaker. The seal can also be applied to devices such as a watch or a clock. 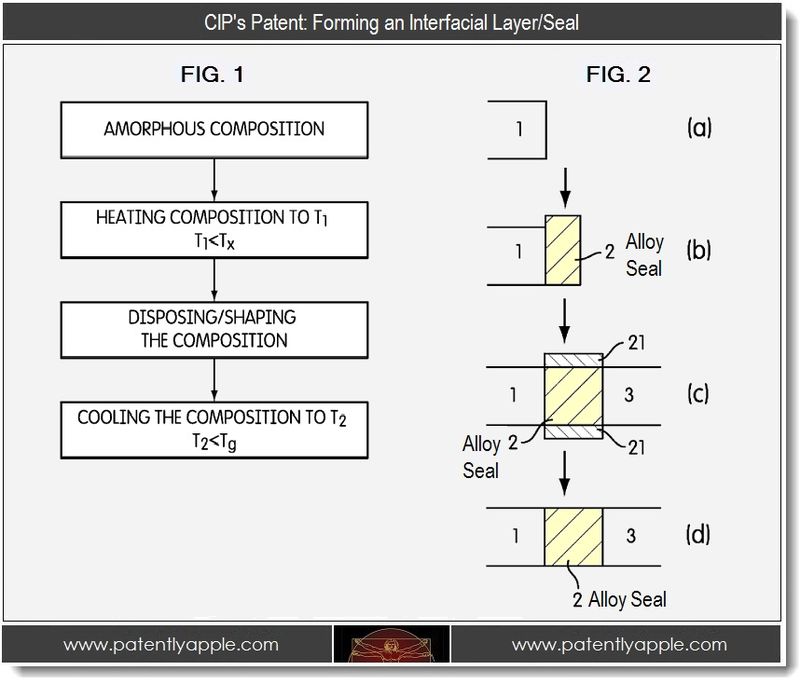 A Wide Variety of Sealing Options for Manufacturing 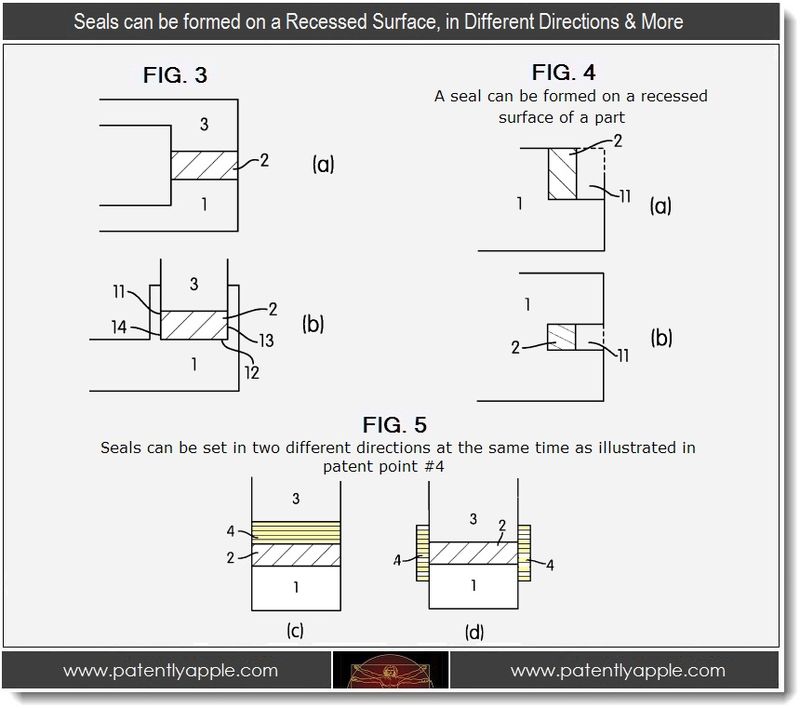 A Seal between a Protruding Wire and Hollow Cylinder In patent FIG. 6 we see an illustrative flow diagram showing the process of forming an interfacial layer/seal. The process includes a step of making the amorphous alloy composition shape; FIG. 7 provides a schematic showing an embodiment of the interfacial layer in the form of a seal between a protruding wire and a hollow cylinder.

The seal can simultaneously function as a bonding element that bonds the two parts together. In one embodiment, the seal can be a hermetic seal. A hermetic seal can refer to an airtight seal that is also impermeable to fluid or microorganisms. The seal can be used to protect and maintain the proper function of the protected content inside the seal.

Apple's updated trademark filing for "Apple" covered such things as precious metals and their alloys along with horological and chronometric instruments, watches, clocks," and much more. This particular patent likewise lists a watch as one of the possible products that could use their technology. In that vein, we conclude this report with Liquidmetal Technologies video on the making of a high-end watch with their technology:

This particular patent relates to the Apple-Liquidmetal Technologies agreement that formed the company "Crucible Intellectual Property" to handle the IP for Apple's special-project outlined earlier in this report. To review the details of this patent, see patent application 20110163509. Crucible Intellectual Property LLC originally filed their patent in January 2011. It was published by the US Patent and Trademark Office in July 2011.

It makes one wonder, with this company being so small, why didn't apple just buy it?