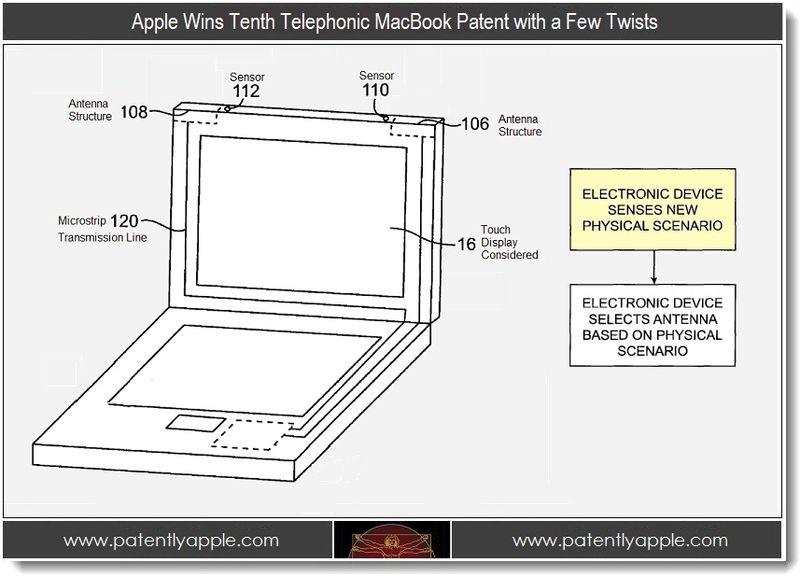 The US Patent and Trademark Office officially published a series of twenty-two newly granted patents for Apple Inc. today. One of the main patents that Apple has won today relates to their tenth Telephonic MacBook patent. Apple's Telephonic MacBook will at minimum present users with the convenience of always-on service much like today's LTE iPad. Previous generations of wireless technology such as 3G were designed with telephony in mind. The LTE wireless standard was designed with data transmission in mind which is ideal for devices such as the iPad and especially the MacBook Pro for road warriors. Whether this is a 2012 or 2013 feature is irrelevant for now. The point is that an LTE based MacBook is a no brainer that will make its way to market when Apple deems it to be the right time. In addition to the MacBook adopting cellular capabilities, Apple's patent delivers a few other interesting twits that are noteworthy.

Apple has received a Granted Patent that relates to antenna diversity systems, and more particularly, to antenna diversity systems for portable electronic devices. One of the key devices presented in this patent is that of a MacBook Pro adopting wireless antennas relating to cellular bands which would provide users with an always on capability much like today's LTE based iPad. 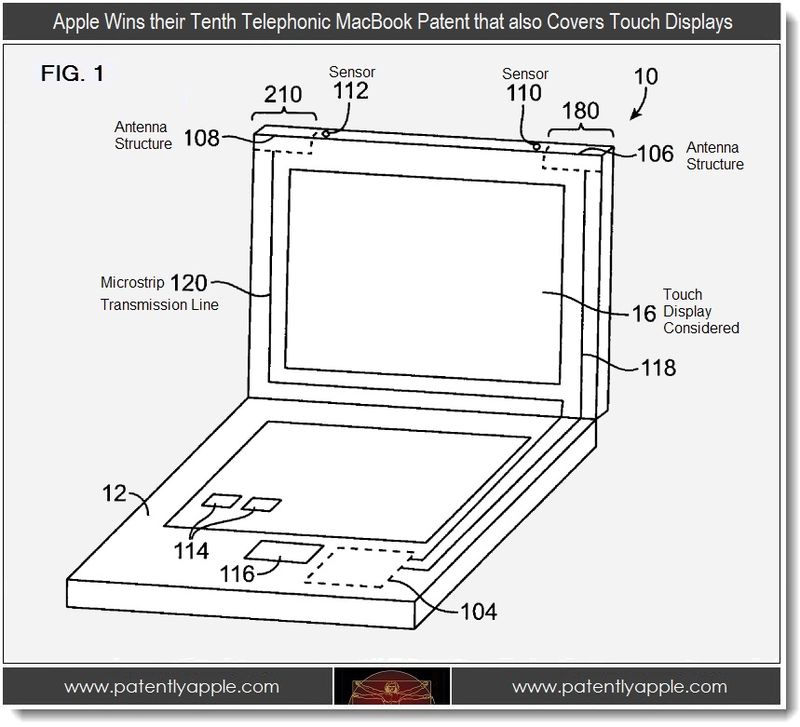 Apple states that If desired, touch screen functionality can be integrated into the MacBook's display (e.g., using a capacitive touch sensor) and may also have a separate touch pad device such as touch pad. Apple states that one of the advantages of integrating a touch screen into the MacBook's display is to save space and reduce visual clutter. Another advantage is that a touch display could also double as a proximity sensor in addition to functioning as a touch sensor (e.g., so that the display can detect objects that are in close proximity to the display but are not actually touching the display.

One of the advantages that are not listed in this patent, due to its 2008 timestamp, is that by offering a touch display in a future MacBook design, they'd be able to create a hybrid MacBook-iPad configuration to compete with hybrid Ultrabook-tablets debuting this fall from Wintel. Additionally, Microsoft has been shown to be working on new hand-gesturing capabilities for tablet and Ultrabook designs which may eventually force Apple into this emerging device category at some point in time. Today's granted patent illustrates that Apple's engineers at least foresaw the need for a hybrid display.

In Apple's patent FIG. 7 shown below we see the backside of an iPhone. Apple designed a future iPhone to possibly integrate antennas into regions 18 and 21. According to Apple, dielectric window 58 would allow radio-frequency signals for the antenna in region 18 to pass through the backside of the iPhone. The dielectric window could be formed from any suitable dielectric materials that are similar in appearance to surrounding portions of the housing of the iPhone.

In one example, Apple states that when the iPhone determines that the user's ear is near port on the face side of the iPhone, the iPhone may switch to using the antenna in region 18 of the back side of the iPhone. Apple interestingly notes that "this type of arrangement may reduce the amount of radio-frequency radiation that is produced by the iPhone in close proximity to the user's head." Whether Apple will ever implement this aspect of the iPhone's design remains to be seen. Yet now that we've all seen that Apple considers radiation as a potential hazard to users, you'd expect that they'd implement this feature just for the sake of positive PR that they'd gain by addressing this public issue. 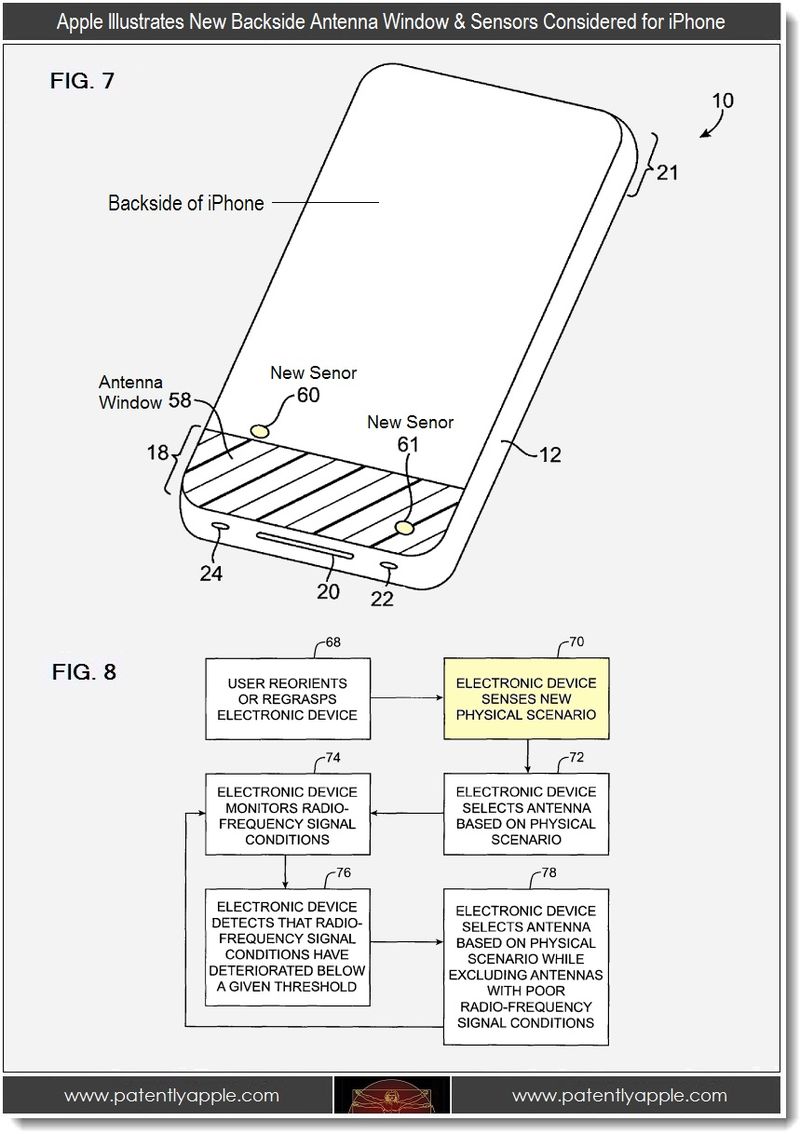 Apple credits John Dorsey and Douglas Kough as the inventors of this patent which was originally filed in Q2 2008. Apple's patent presents ten patent claims. Apple first introduced us to the Telephonic MacBook on August 11, 2010.

January 24, 2012: Apple Wins another Piece of the Telephonic MacBook Puzzle While new 2011 US Patent Statistics Prove the loonies Wrong Again

Mar 22, 2011: Apple Advances the Antenna System for the Telephonic MacBook