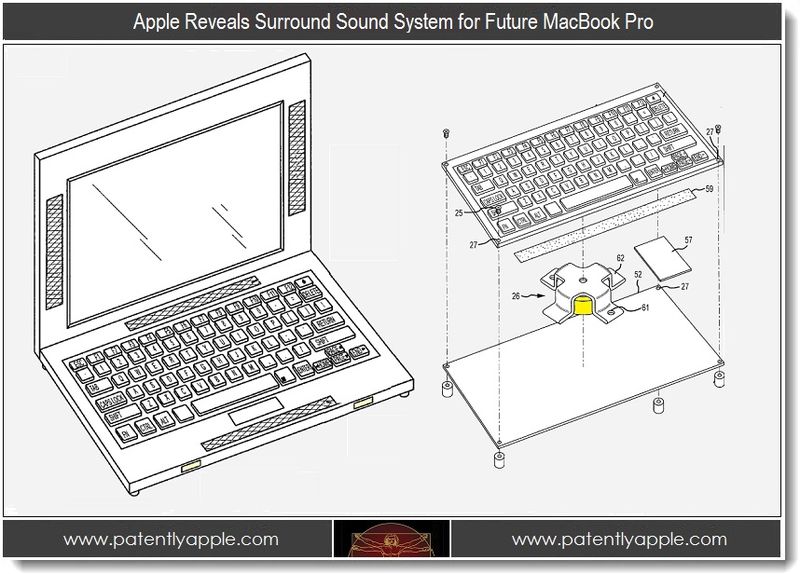 Apple thinks it's time for a MacBook Pro to have a kick-ass surround sound audio system. With future MacBooks doubling as our Mobile TV, Movie Theater and high end video conferencing system, it's time to kick the audio quality up a notch so as to compete with PC Notebooks offering Beats Audio. This is definitely a feature that I think that most would welcome with open arms.

Many electronic devices, such as computers, smart phones, and the like are becoming smaller and more compact. As these electronic devices become smaller the internal space available for audio speakers becomes smaller as well. This is especially true as space within the device enclosure for audio speakers may compete with the space required for circuit boards, hard drives, and the like. Generally, as a speaker decreases in size it is able to move less mass and thus sound quality (or at least loudness) may decrease. This may be especially noticeable for sounds in the lower end of the audio spectrum, e.g., beneath 1 kHz. Furthermore, the available volume within an electronic device shrinks which in turn provides less air for a speaker to vibrate and thus limits the audible response. Similarly, the volume level and frequencies able to be produced by a speaker may also decrease as the size of the speaker decreases. Thus, as electronic devices continue to decrease in size, detrimental effects may be experienced for audio produced by the devices. 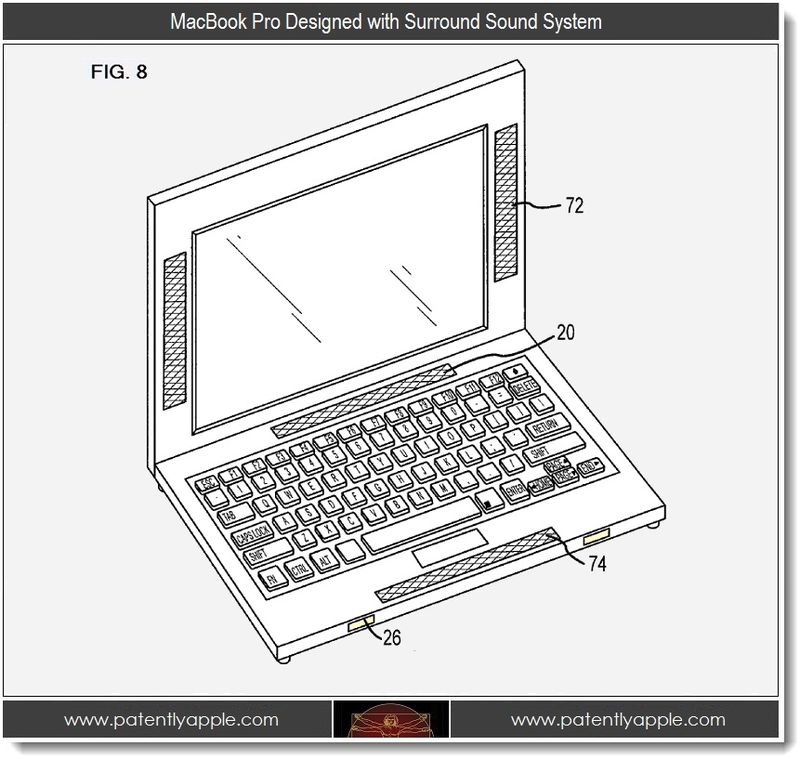 Apple further states that the audio transducer may operate in such a fashion that it effectively provides a near full-range response frequency instead of acting like a subwoofer. That is, the transducer may output both low and mid-range frequencies, essentially performing as a "subtweeter." In such embodiments, the speaker may output not only bass range frequencies (e.g., about 20-500 Hz), but also mid-frequencies (e.g., about 500-1500 Hz or higher). 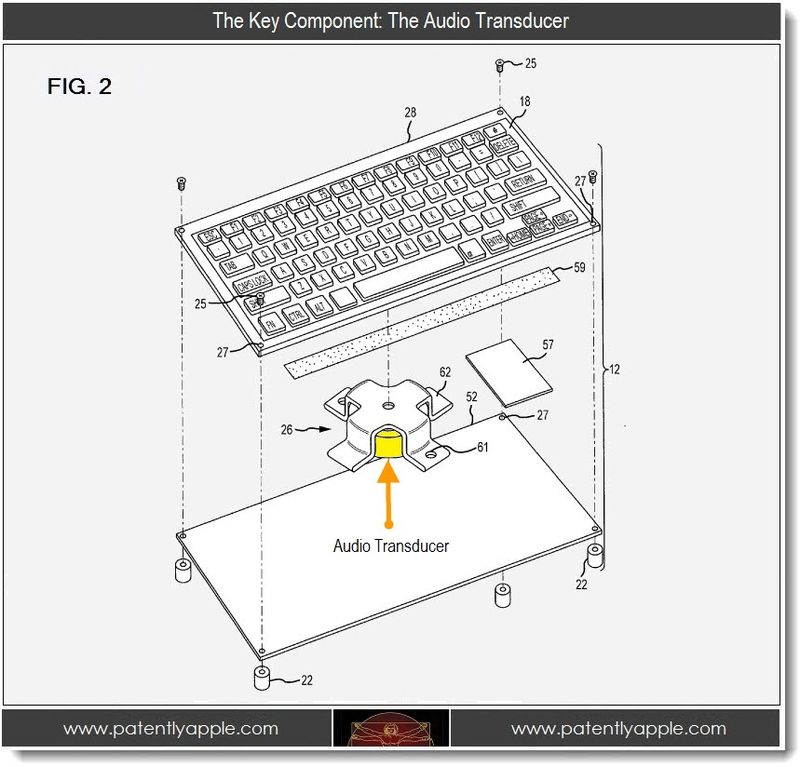 Thinking far ahead, Apple states that an audio transducer of the type disclosed in their invention may be incorporated into a seat or chair as part of a home theater experience. The audio transducer may vibrate not only the chair but the person sitting in the chair under certain circumstances, thereby providing not only audible but also tactile feedback if desired. Further, the motion of the person may serve to displace yet more air and thus create an even louder sound.

Some of the Transducer Detailing

Apple's patent FIGS. 4 and 5 below illustrate the transducer 26 including a coil 54 and made of an electrically conductive material. When an electrical signal is transmitted through the coil it acts as an electromagnet. If an alternating current is passed through the coil, the coil may alternate between being magnetically active and inactive, or polarized a non-polarized depending on the nature of the coil. 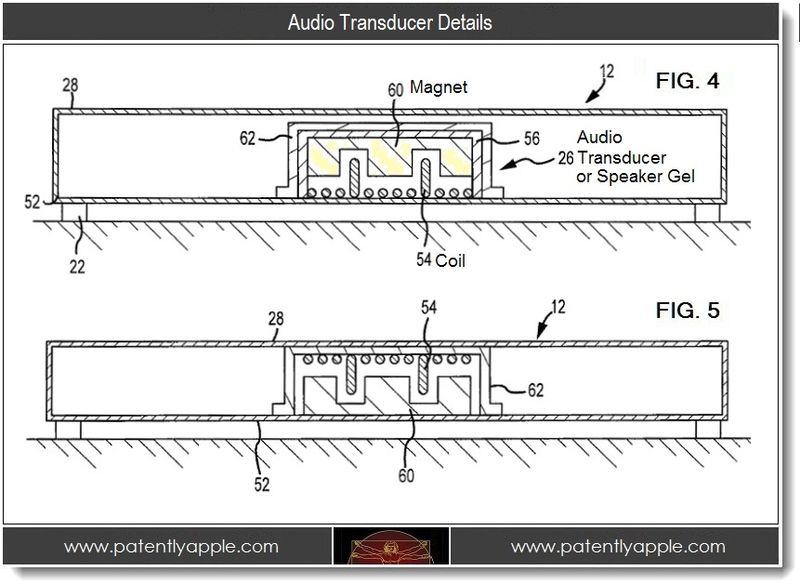 The audio transducer typically also includes a magnet that is biased into a rest position by a spring, plate or the like. The magnet has a set polarization and, depending on the audio signal, either is forced towards the coil or away from the coil when the coil is energized.

The magnet may be any type of material with magnetic properties, for example, iron or another ferrous material. Thus, as current is passed through the coil, the magnet is forced away from the coil (or drawn towards the coil, depending on the relative polarization of coil and magnet). Generally, the coil forces the magnet away when energized. When the coil is not energized, the magnet returns to its rest state, which is relatively nearer the coil than the magnet's position when the coil is energized.

Further, the distance the magnet travels from the coil may be varied by varying the electrical charge to which the coil is subjected. In this manner, the magnet may be driven by the coil in precise motions depending on the strength and duration of electrical current applied to the coil. These motions may vibrate not only air near the magnet, but also any surface to which the magnet is attached. In this manner, the audio transducer may induce vibrations in a surface (such as an enclosure of the electronic device) to which the transducer is affixed by the bracket 62. The motion of the surface may produce audible sound waves in much the same manner as the diaphragm of a conventional speaker moves air to produce a similar effect.