Apple Introduces us to "Gifting" iTunes Purchases via NFC 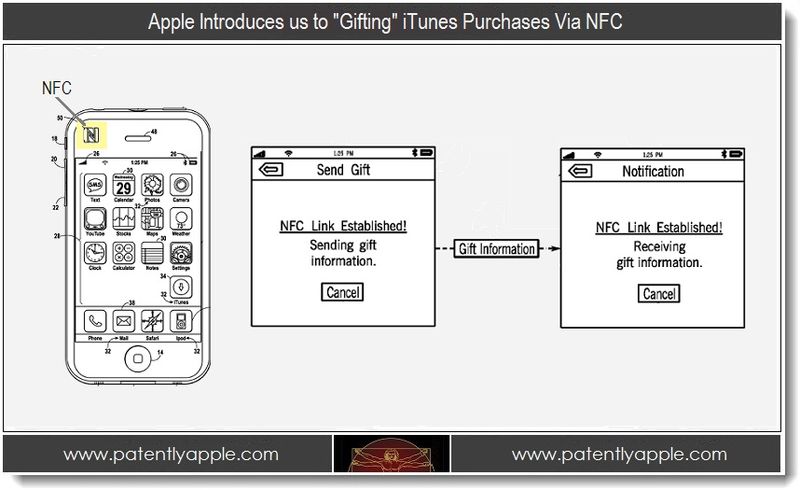 On April 26, 2012, the US Patent & Trademark Office published a patent application from Apple that introduces us to gifting iTunes purchases via NFC or email. Apple's patent generally relates to digital media content and electronic devices being configured to transfer information from one user's account to another user's account. Apple will also allow users to share iTunes Playlists – though at a cost being that it's in context with "gifting," as Apple calls it. It sounds like a great idea and it should be available when NFC based iDevices finally debut.

In recent years, the declining popularity of audio cassette tapes and compact discs in conjunction with the growing popularity of electronic devices capable of playing various forms of digital media content has led to a dramatic increase in the demand for downloadable digital media content. Many such digital media player devices, particular portable devices, are currently available on the market and support a wide variety of file formats that digital media files might take. For instance, downloadable digital music files are commonly provided in the following file formats, just to provide a few examples: MP3, AIFF, WAV, MPEG-4, AAC, etc.

While the download of digital media files directly to digital media player devices from an online digital media content provider may offer a convenient and simple solution to store various digital media files in a common location for playback on demand, the transfer of such files between individuals is often times problematic due to the nature of copyright protection.

For example, downloadable digital media content may be protected using a variety of digital rights management techniques, which may generally refer to access control methods used by device manufacturers, content publishers/providers, and copyright holders in order to limit usage and distribution of digital media content. This ensures that the copyright holder's rights are honored and that the copyright holder is compensated for each sale of a copyrighted digital work. Thus, the transfer of a copyright protected digital media file from one device to a separate receiving device may oftentimes result in the transferred file being unplayable or inaccessible on the receiving device.

Apple's invention generally relates to various techniques for gifting downloadable media files provided by an online digital media provider between multiple electronic devices. In accordance with one embodiment, a first device may initiate a gifting process by selecting one or more media files to be gifted to a receiving device. For example, in initiating the gifting the process, the user of the initiating device may authorize a gift charge to be applied to the user's account associated with the online digital media provider. Thereafter, a gift offer may be transmitted from the initiating device to the receiving device using a close range communication protocol, such as near-field communication (NFC) connection. The receiving device, upon receiving the offer, may transmit an acceptance message using the NFC connection, in which the receiver's account information associated with the online digital media provider is included and transferred to the initiating device.

Apple's patent FIG. 4 is a schematic representation depicting the use of NFC based iPhone to purchase one or more media files from iTunes. 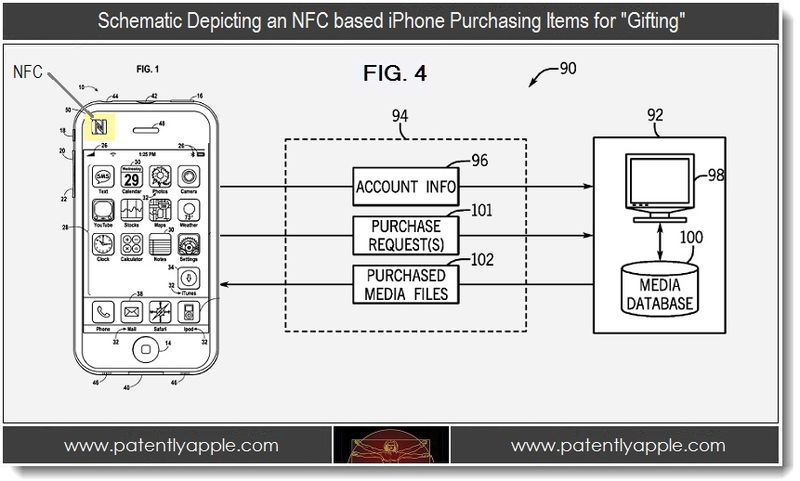 Patent FIG. 7 is a schematic representation illustrating the gifting of the purchased media file. 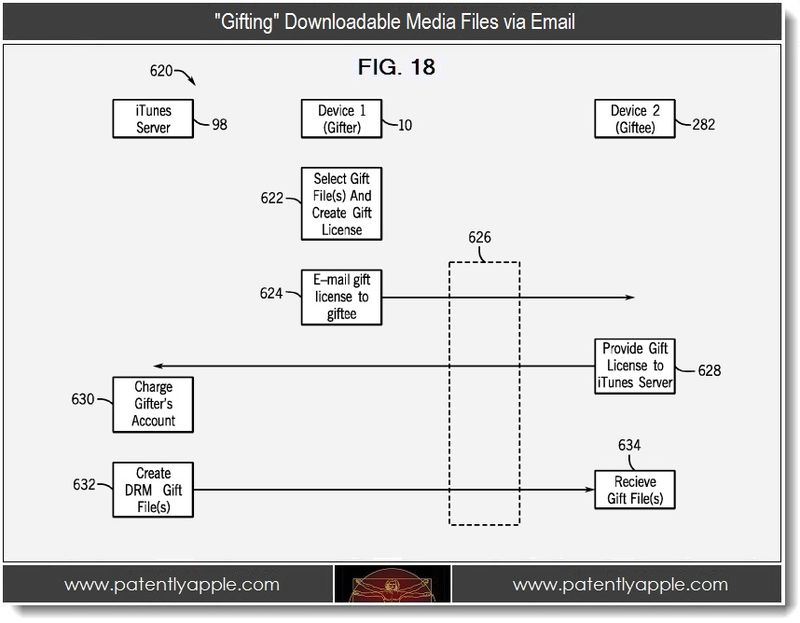 Apple's patent FIG. 11C shows a plurality of screenshots illustrating a method by which the giftee device may approve a payment for the gifted media file if the gifter's payment account cannot be charged. 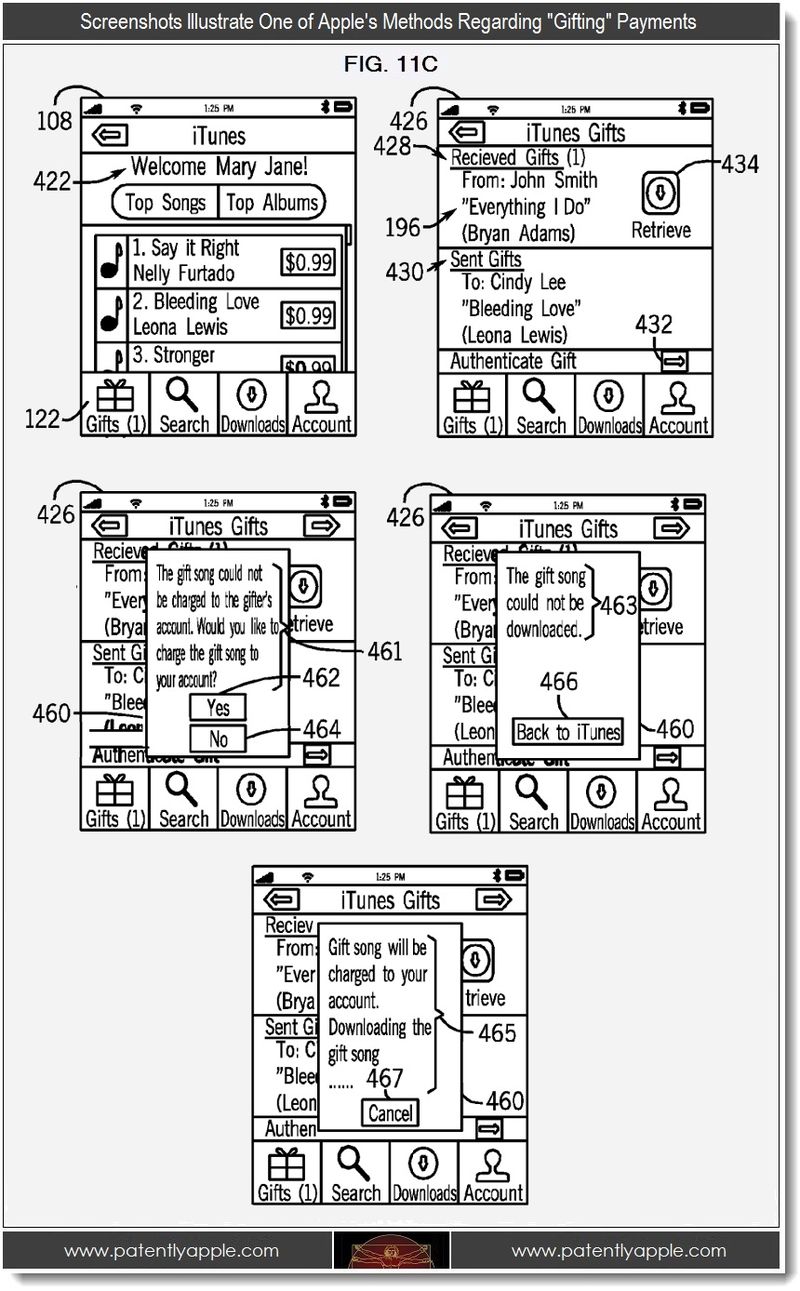 Apple's patent FIG. 10A below shows us a plurality of screen images that may be displayed on the giftee device illustrating a method for initiating the gifting process of FIG. 7 above; patent FIG. 10B shows us a plurality of screen images depicting the transmission of gifting information from the gifter device to the giftee device using a communication path in accordance with the gifting process depicted in FIG. 7 (which relates to two NFC based iDevices tapping together to make the transfer). 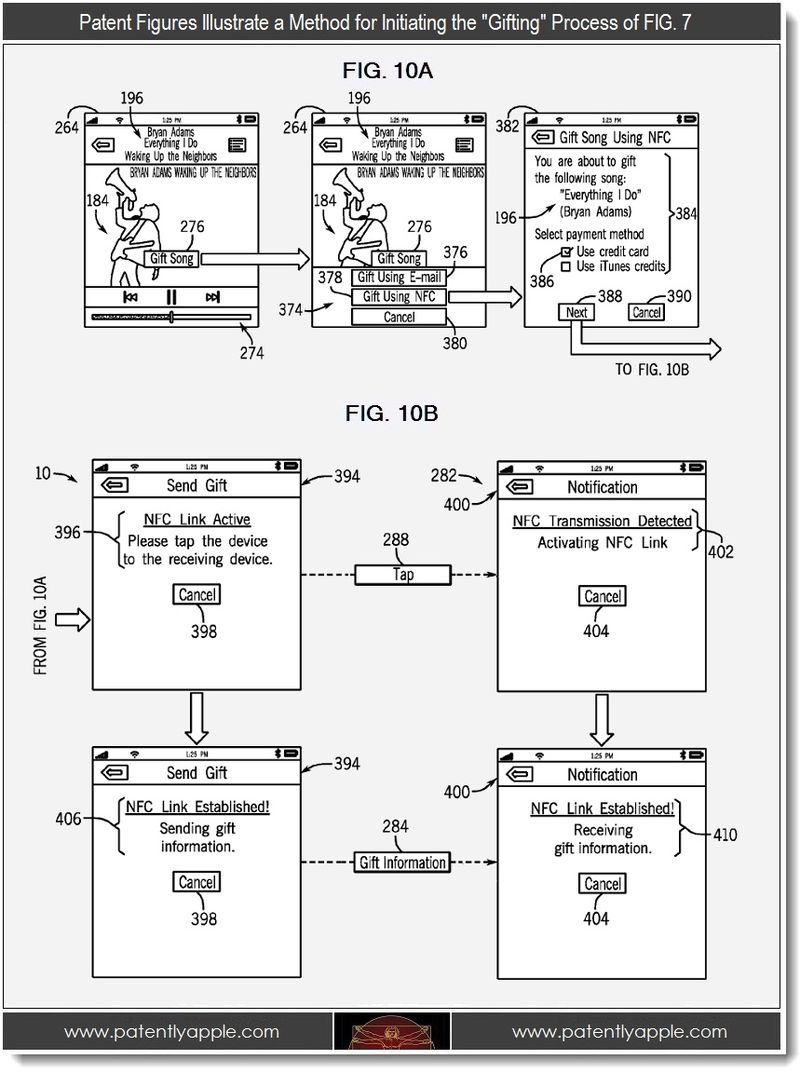 Apple's patent FIGS. 20A shows us a plurality of screen images that may be displayed on the giftee device depicting a process for redeeming the electronic gift certificate with the online service and receiving a gift file. 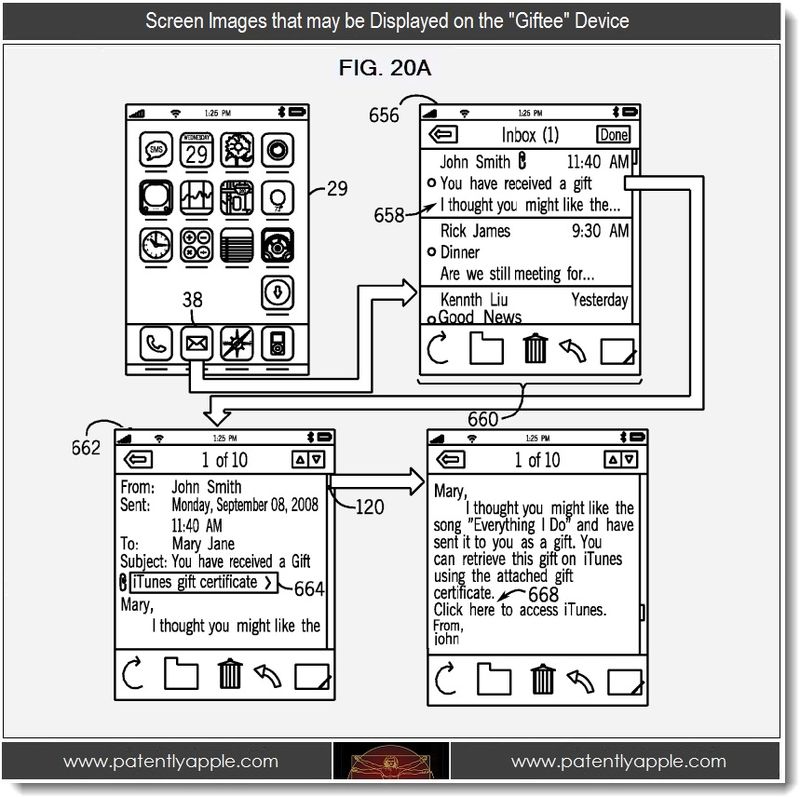 Apple's patent FIGS. 21B shows us a plurality of screen images depicting various techniques for personalizing a playlist having a plurality of media files to be gifted to a giftee device. 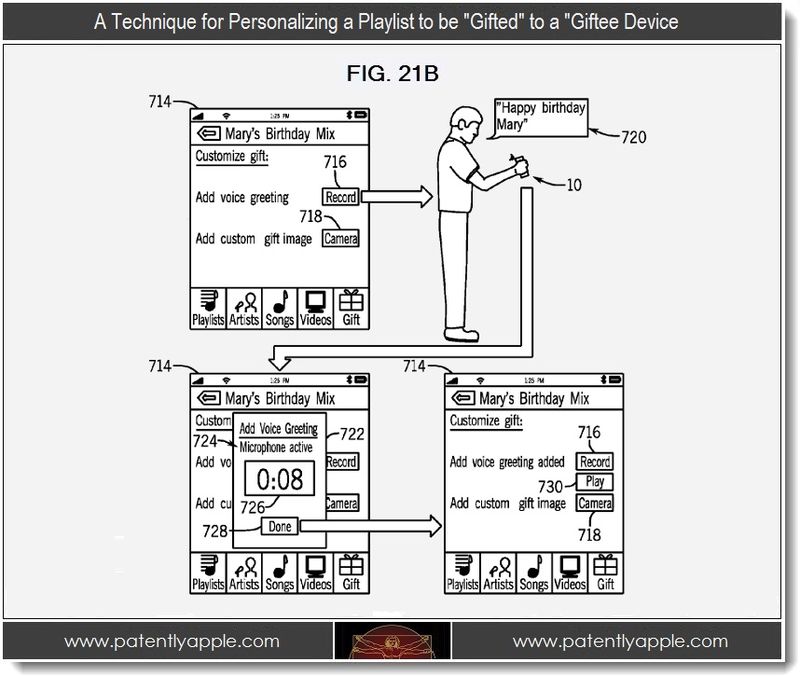 I think this is a fantastic idea. I dont think many people quite understand how this is going to work. But i wish i was invited to the 2012 WWDC this year I saved money for the conference. I would have love to test the iPhone.