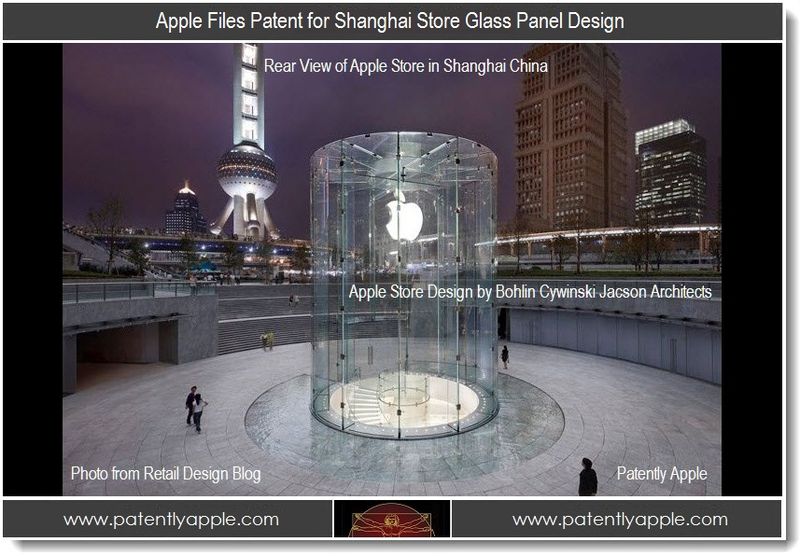 In March we broke the news on Apple winning a design patent for Apple's Shanghai's Glass Store entrance. Today we see that Apple is now seeking to protect that design even further by filing a patent application for it. Apple's patent details various aspects of the glass structure and we present you with a few of the key graphics in today's report.

Glass structures have been around for some time. Such structures must meet structural requirements for their particular operation, and must support loads and forces of expected magnitudes. Because of the structural requirements for supporting such loads and forces, glass pieces used in such glass structures may be formed of a laminate structure that includes layers of glass and bonding materials. A laminate structure is much stronger than any one layer by itself and thus it can support loads and forces of greater magnitude. For long spans of single, or monolithic, glass panels, however, the conventional laminate structure may deflect for lack of sufficient support, and may be unsuited to withstand some loads or forces of great magnitude. Such difficulties have conventionally prevented the creation of large buildings made of large glass panels and supports, because the structural properties needed to construct the buildings limited the size of the glass panels that could be used. This is particularly problematic in the case of structures with curved walls, such as a cylindrical shaped building.

A View of the Main Structure The Apple Store structure includes 12 panels arranged such that long sides (120) of adjacent panels meet with panels form a vertical cylinder. The circular arcs of all panels share a center point, corresponding to a longitudinal axis extending through the center of the vertical cylinder.

Apple's patent FIG. 4 is an enlarged schematic view of an edge profile of the panel of FIG. 1. The panel 100 may be composed of multiple layers. Layers 136A through 136C may be formed together through, for example, a laminating process while in a substantially flat state, and may acquire their arc shape through a slumping process by heating panel 100 over a mold. 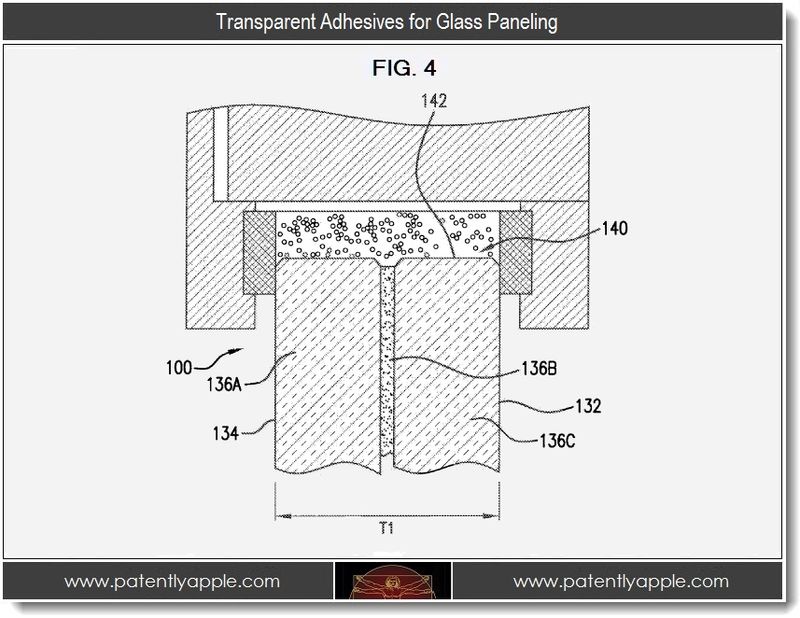 In some exemplary embodiments, a layer of adhesive (corresponding to layer 136B in FIG. 4) is disposed between adjacent glass layers. The adhesive is preferably transparent. Any suitable adhesive may be used as would be apparent to one of skill in the art. For example, the adhesive may be polyvinyl butyral (PVB) or an adhesive such as that known as "SentryGlas Plus" (SGP) interlayer, manufactured by Dupont.

A View of the Glass Roofing Design

Apple's patent FIG. 12 illustrated below is a perspective view of the roof of the building.