The Foxconn-Sharp Alliance is all about Apple's Coming HDTV 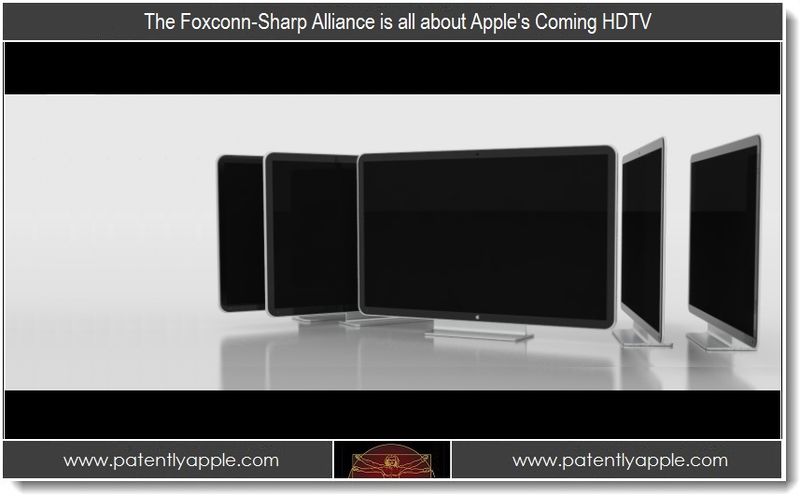 Yesterday, Apple was granted a very interesting and important patent regarding a very specific TV Display technology. The patent basically related to Apple's advancement of a little known technology called Fringe Field Switching (FSS). Apple's research pushed the technology so that it could now power a large HDTV. Previous versions of FSS couldn't accommodate such large displays. The underlying technology is an off-shoot of IPS called S-IPS. It's a technology that provides superior performance and color gamut with high luminosity. IPS technology is currently being used in Apple's iMac and the patent for IPS is held by Sharp. This was one of the key points that surfaced in a news report out Taiwan today that basically confirms that the Foxconn – Sharp deal directly equates to a future Apple HDTV.

The Buzz out of Taiwan Today

The buzz out of Taiwan today, stemming from a report by Sofia Wu, is all about Hon Hai Precision Industry Co. (who owns Foxconn) investing $1.6 billion in the Japanese electronics maker Sharp Corp.

Wu reports that "The two corporations have struck a deal to overhaul Sharp's division that makes LCD panels for televisions…" And that's one of the key points here. It's definitely an investment in overhauling Sharp's TV division – plain and simple.

Wu goes on to state that "As a world-renowned brand, Sharp possesses a number of advanced technologies, including IPS monitor used by Apple's newest iMacs. It also has other cutting-edge flat-screen technologies that could help strengthen Hon Hai's Apple supply chain," industry watchers said.

Wu reports that "Apple orders now account for 45 percent of Hon Hai's revenues. The new partnership with Sharp will contribute to Hon Hai's efforts to become Apple's partner in producing its next star device iTV as Sharp is one of the few companies that can provide large-size LCD panels using 10th-generation technology, industry sources said."

One last Point about Apple's Granted Patent to Note

One point that was found in Apple's granted patent that I didn't overly emphasize yesterday was their reference to a technology called "Ultra-FFS TFT-LCD. This technology is noted as supporting "Super Image Quality, Fast Response Time, and Strong Pressure-Resistant Characteristics." In a paper published by Seung Hee Lee, who is mentioned in Apple's patent, we find that Ultra-FSS supports touch. That could be an essential feature for Apple's HDTV outside of the consumer market.

Large touch displays could be used for business presentations and even in Medical labs so that doctors could pull up a medical file and/or rush X-ray all with a touch of the display. No longer will reviewing an X-ray be on simple glass. Allowing surgeons to quickly react on one display for all of their needed files is a time saver that could save lives.

And lastly, it should be noted that the Ultra-FFS TFT standard was specifically designed with TV in mind – and that's the point of yesterday's patent and today's buzz over the Foxconn-Sharp deal. Sharp's patented IPS technology is likely a component that Apple needs to protect the technology going into their displays and more importantly, displays that are televisions.

It sure sounds like Apple's true HDTV plans are slowing coming together. However, the timing of such a market-changing device should be taken in stride. Whether it's this year or two or more years from now is irrelevant. When it arrives, it'll likely send shock waves throughout the industry and market if they get the right blend of Apple services and features together. That also means being able to deliver regular television content that's free. That's a point that Steve Jobs fought to avoid but will likely be needed if their TV is ever to go mainstream.

At the end of the day, Apple's controlled news leaks in combination with their publically published TV related patents are sure ramping up the excitement for a true HDTV from Apple. You know Apple – they love to control that buzz. But it's not just buzz anymore. The facts for building a case for an HDTV are becoming more solid as time goes on. And today's news out of Taiwan is a case in point.

Update May 11, 2012: Foxconn confirms work on an Apple's iTV and that the deal with Sharp is all about this product as we noted in our report.

Source for the Buzz out of Taiwan Today: Taiwan Focus, Sofia Wu

I guess Sharp is to Apple TV what Samsung is to iPhone. Both a important supplier and a competitor.